Love Greek food and want to taste the cream of the crop? Head to the island of Tinos

Love Greek food and want to taste the cream of the crop? Head to the island of Tinos – it’s cooking up a storm with a culinary scene that attracts the gastronomes of Athens

By Anastasia Miari For The Mail On Sunday

While Greek food is best experienced in Greece, you might well find the cream of the nation’s crop in Tinos – the Aegean gem where the gastronomes of Athens head in summer.

A new culinary scene has been simmering away for the past few years, with many young locals returning to bring their family wineries and traditions back to life.

Start your days at O Megalos Kafenes, the beating heart of Pyrgos village and one of the oldest kafeneions (a traditional Greek cafe) on the island. You’ll spot moustached men playing backgammon at marble tables in the dappled sunlight. Try a silty Greek coffee and a creamy, semolina-rich galaktoboureko pastry.

Sunny outlook: The archway of a home in Pyrgos, which is known as ‘the marble village’ in Tinos 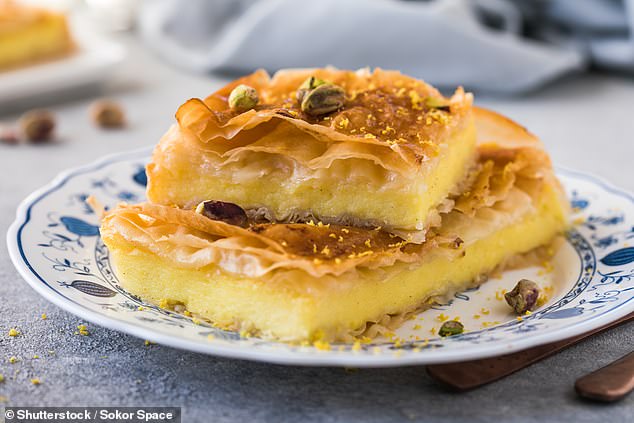 Pyrgos is known as ‘the marble village’, a nod to Tinos’s history as a centre for the material. After a morning coffee, stroll the stark white alleyways of the village to spot sculptures. Hand-crafted marble plates also sit above doorways, and the village is home to the Marble Museum.

Uncharacteristic for most Greek lunch spots, To Thalassaki requires a booking. Set on the beach at Ormos Isternion, this seafood restaurant (swisher than your standard tavern) is a Greek classic – order the smoked herring taramasalata spiked with dill and mussels cooked in ouzo.

Tinos’s wild landscape demands exploration. Set out by car to visit as many of its villages as possible. On the way, it’s hard to miss the many pigeon houses on the island, a souvenir left from the conquering Venetians. Little huts with slate roofs that were once a symbol of wealth are decorated with folk art in the shapes of flowers, squares, triangles and diamonds. You can even stay at the tastefully renovated Tinos Pigeon House (tinospigeonhouse.gr/?en), where rooms cost from £150 a night.

Also on your hit-list should be the villages of Agapi (meaning ‘love’ in Greek), with whitewashed houses dripping with bougainvillea, and Volax. The streets of Volax are impossibly romantic – admire the lines of poetry painted on the walls of houses.

Family-run taverna Sta Fys’Aera sits beyond the wind-bashed mountain village of Aetofolia. Make the trip here for the local meze – try the courgette salad and superbly salty Tinos cured pork, swilled down with a glass of punchy retsina. 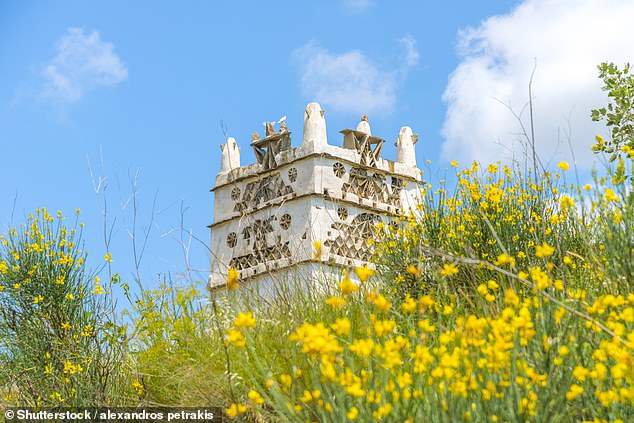 There are many decorated pigeon huts on the island of Tinos, one of which is pictured 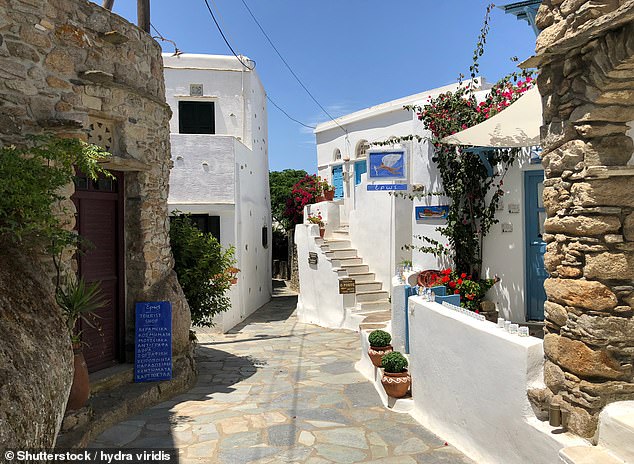 ‘The streets of Volax (pictured) are impossibly romantic,’ says Anastasia Miari. She recommends holidaymakers add the village to their Tinos ‘hit-list’

The island’s fertile ground was exploited for centuries of wine-making before locals switched to livestock instead. Now a younger generation of Tinians are restoring its wine-making traditions. Visit the Volacus vineyard – unique here because vines grow out from between granite rocks. Book a tour at volacuswine.gr.

The Agnanti taverna in Ktikados barely has room for more than three tables indoors but the place churns out some of the finest fare. Yiannis Charikiopoulos bustles between the kitchen and patio, serving up enormous portions of food.

Tripotamos village is a cleverly constructed settlement that appears from the road as only a few houses (a deterrent for pirates in the 17th Century) but then reveals itself to be a maze of homes. Stay at The Crossroads Inn for an incredible breakfast spread showcasing the island’s finest produce. Studios cost from £95 a night (crossroadsinn.gr/en).