The ‘love hormone,’ oxytocin, triggers men to feel for friendly and social, a new study shows.

But another study published earlier this week shows the hormone can have quite the opposite effect on women.

Testing male mice, Stanford University researchers were able to control the amount of oxycontin into the ‘reward system’ part of the brain, making them more or less sociable.

Taken together, the two studies tell us that the love hormone may affect men and women very differently.

A new study from Stanford University shows that oxytocin triggers the a brain system that rewards social interaction, but oxytocin  may, paradoxically also be associated with fear of new experiences for women

The ‘love hormone’ is released in the brain during social interaction and triggers the brain’s reward circuitry, which releases dopamine that makes us feel good when we do something productive for our survival.

People with conditions like autism don’t experience this neurochemical reward for social behavior, so understanding oxytocin’s role in social interactions could be a clue in the development of autism therapies, according to the study.

There are already clinical trials experimenting with oxytocin as a treatment for autism, and low dose oxytocin nasal-sprays can be purchased online.

But,’like anything in the brain, oxytocin has some positive effects, but under certain circumstances, it may do some things that aren’t so good,’ says Dr Robert Malenka, the senior author of the Stanford study.

A UC Davis study, published earlier this week in Biological Psychiatry, found that female mice that had been previously ‘bullied,’ or had had negative social experiences were thereafter afraid of new social experiences.

But when oxytocin was inhibited in these female mice, they were more open to socializing with other mice.

For males in that study, blocking oxytocin had less dramatic effects, and actually made them more skittish in familiar settings, like their own cages.

Now, the Stanford study shows that oxytocin has a positive affect on males in social settings.

When a male mouse was introduced to another, the researchers saw a surge of oxytocin signals in the reward circuit, which then activated dopamine in its brain, giving it the mouse the feeling of pleasure from its social interaction.

Dr Malenka’s team devised an experiment to see if another mouse was just ‘more interesting’ than nothing. The researchers introduced an inanimate toy, that even looked like a real mouse.

But the toy mouse did not trigger the same reward system, and the Stanford team didn’t see the same oxytocin surge.

‘There’s something special about having a living breathing buddy mouse to interact with,’ Dr Malenka said.

When the researchers blocked oxytocin, the male mice were less sociable.

Research on what exactly oxytocin does in our brains varies widely, but this study is another in the constellation of work confirming that oxytocin is important not just to intimate bonding, but broader social interactions.

This study builds on previous ones that indicated that we enjoy socializing because it triggers that reward circuitry in the brain, and sheds new light on where that process begins. 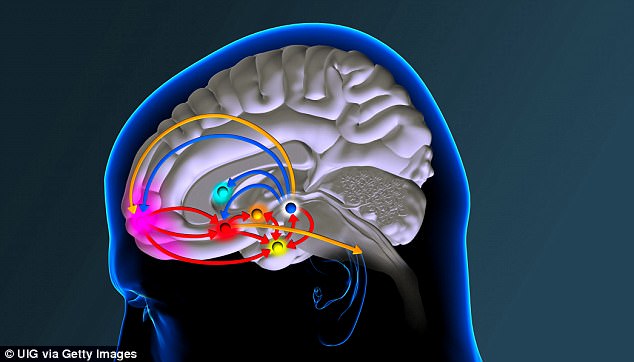 Oxytocin is involved the brain’s reward system (pictured), which releases dopamine into the brain to create a feeling of pleasure in response to social activity – at least for males

The brain’s reward system is a crucial element of our biology, as it tells us what behaviors are helpful to our survival.

The release of dopamine creates the feeling of pleasure, an evolutionary reward telling us that we’re doing the right thing for survival when we eat, hydrate, mate or socialize.

The study made it possible to observe that oxytocin was triggering this reward system, but ‘in truth, we don’t know what the mouse is experiencing,’ says Dr Malenka.

‘It’s possible that a contributing factor is that oxytocin increased the salience,’ or importance,’of social interaction,’ says Dr Malenka.

This falls more in line with the UC Davis study on female mice with previous, negative social experiences. That study’s co-author, Dr Brian Trainor, says that oxytocin may just ‘turn up the volume’ of experiences, whether good or bad.

Dr Malenka’s study did not include female mice for ‘a variety of reasons,’ but, for one, oxytocin’s actions in females may vary because of their estrous cycle,’ or reproductive cycles, he said.