Anna Vakili has claimed she was set upon by a group of who ‘threatened them with illegal weapons’ in London’s Hyde Park on Bank Holiday Monday.

The Love Island star, 29, released a statement on Instagram on Tuesday, insisting she was forced to act in ‘self-defence’ after a ‘drug-using’ teenager ‘swung’ at her cousin Asal – a claim her family have firmly denied.

In a video shared on social media, the TV personality can be seen dragging a young woman by her hair across the concrete, before her younger sister Mandi, 28, kicks her in the head following a heated exchange.

Brawl: Anna Vakili (pictured far left), her sister Mandi (pictured far right) and her cousin were embroiled in a fight in London’s Hyde Park against a group of women on Bank Holiday Monday

The pharmacist kicked off her post by referring to abuse she’s been met with online, stating: ‘Since coming out of Love Island it’s become my normal for people to shout abuse at me in the streets and I have learned to turn a blind eye and remove myself from the situation.’

Anna later said she, Mandi, her cousin and her boyfriend were approached by a group, who ‘subjected them to continuous verbal abuse’ and claimed they possessed a gun.

The TV star added: ‘Yesterday I was having a picnic in the park with my sister, boyfriend and cousin when we were subjected to continuous verbal abuse from a group who came near us who were doing drugs.

‘Wanting to remove ourselves away from them we packed up to leave they came over swung at my cousin and threw her by her hair leaving her bleeding. Out of self defence we had to get them off of her and leave. 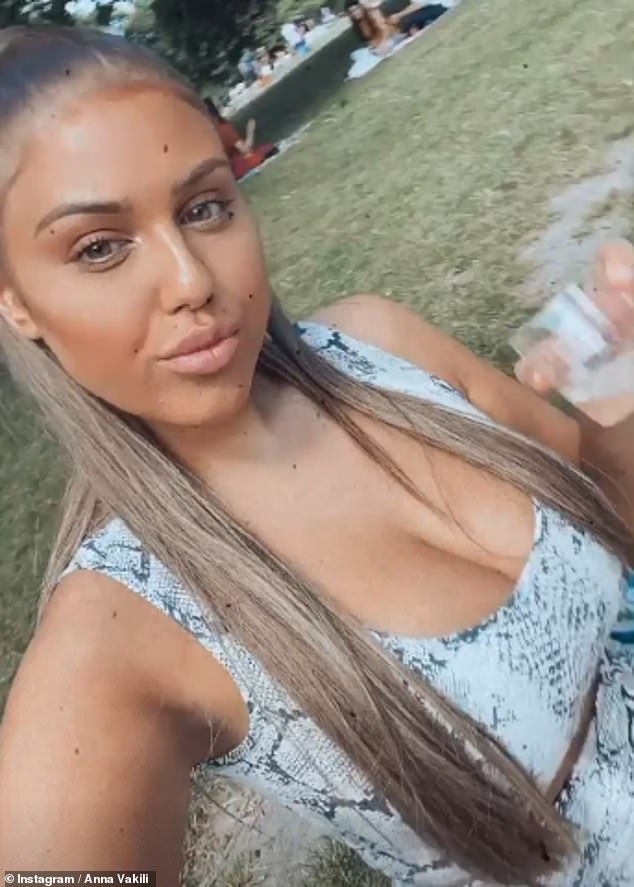 Attacked? The Love Island star, 29, released a statement on Instagram on Tuesday, insisting she was forced to act in ‘self-defence’ after ‘threatened them with illegal weapons’ 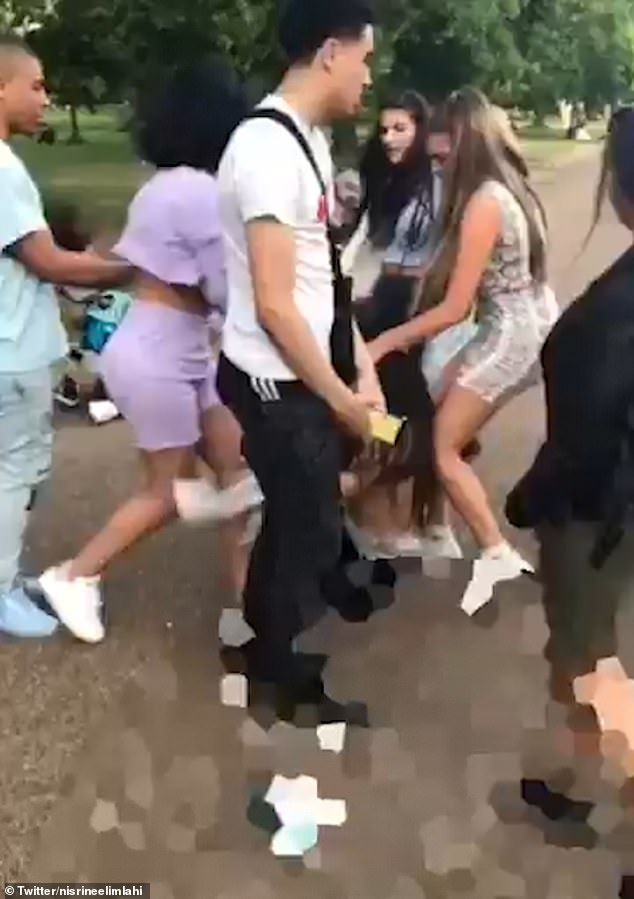 Vicious: Anna can be seen dragging a young woman by her hair, before her sister Mandi kicks her in the head 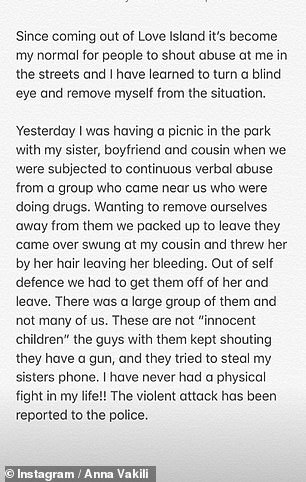 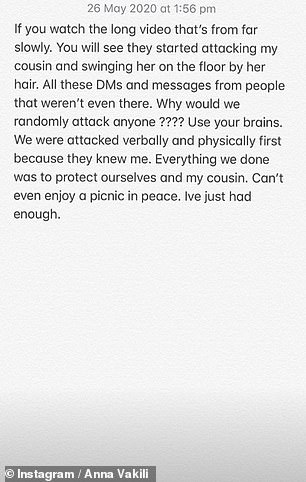 Sharing her side: In a statement released on Instagram on Tuesday, the Love Island star, 29, insisted she was forced to act in ‘self-defence’ after a group ‘swung’ at her cousin

‘There was a large group of them and not many of us. These are not ‘innocent children’ the guys with them kept shouting they have a gun, and they tried to steal my sisters phone.

Claiming she’s ‘never had a physical fight ever’, she added: ‘The violent attack has been reported to the police.’

‘If you watch the long video that’s from far slowly. You will see they started attacking my cousin and swinging her on the floor by her hair. All these DMs and messages from people that weren’t even there.

‘Why would we randomly attack anyone ???? Use your brains. We were attacked verbally and physically first because they knew me.

‘Everything we done was to protect ourselves and my cousin. Can’t even enjoy a picnic in peace. Ive just had enough.’ [sic] 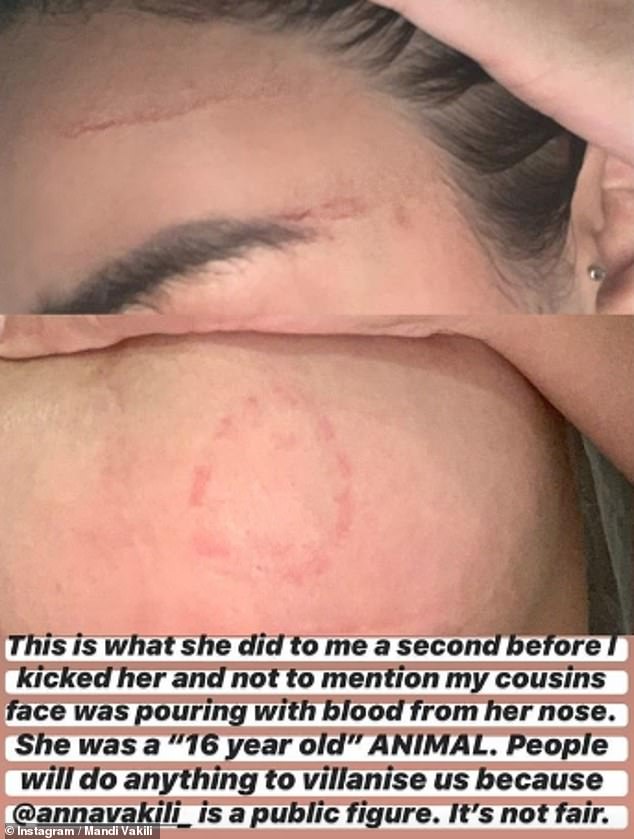 ‘People will do anything to villainize us’: Mandi took to social media to share a bruise she sustained from the fight

A representative for Anna told MailOnline: ‘Anna and Mandi Vakili and others in their group were involved in an unprovoked violent and verbal attack on Monday in Hyde Park which included Mandi and their cousin being hit and punched and the group of attackers attempting to steal their belongings.

‘The very serious matter is now being dealt with the police as they were threatened with illegal weapons during the attack.’

The family of the teenager have since spoken out on social media, insisting the fight kicked off when Asal told the fans to ‘shut up’ after they recognised the reality star from the ITV2 dating series.

Her cousin Nisrine said: ‘Basically my cousin and sister went to Hyde Park, not far away from them were Anna and Mandi, the group of girls. 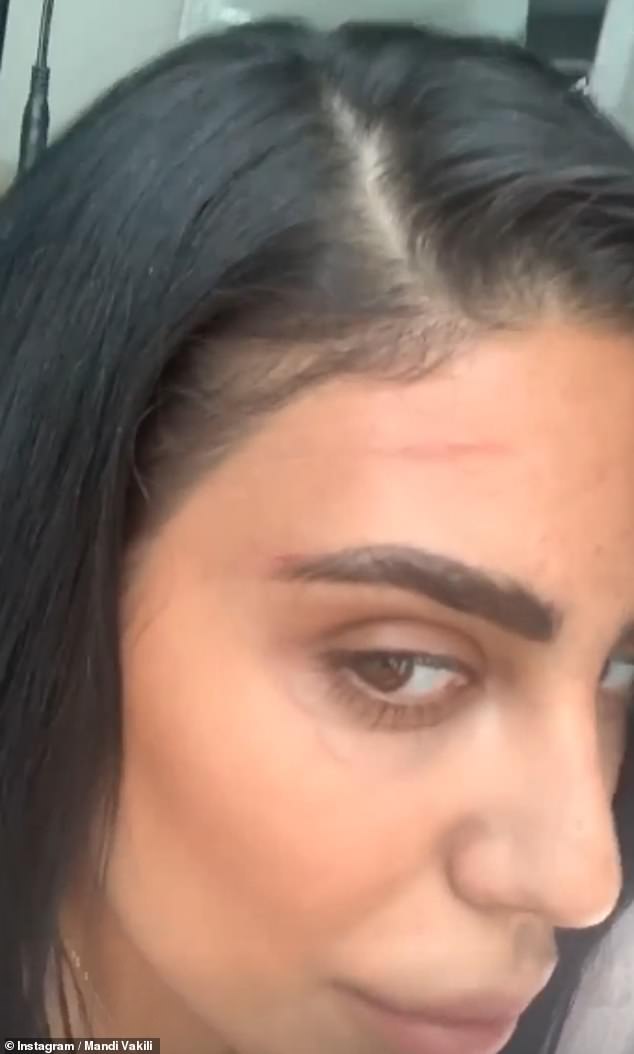 Injured: The make-up free social media influencer pictured with a cut on her forehead

‘They were just chilling or what not, my sister’s friend saw her, approached and said Eid Mubarak. You as a famous person, people will approach you, so she kept calling Anna.

‘My sister was confused, she thought do I even know you? What have I done to you? She said I’m going to punch you up.’

Urging their fans to ‘be aware of the people you look up to’, she added: ‘Obviously when someone comes to your face, you’re going to defend herself. Asal kept saying I’m going to F you up.

‘Asal pushed her, then Anna and Mandi went rushing to my cousin and put her on the floor, Anna ripped her shirt open, Mandi kicked her. 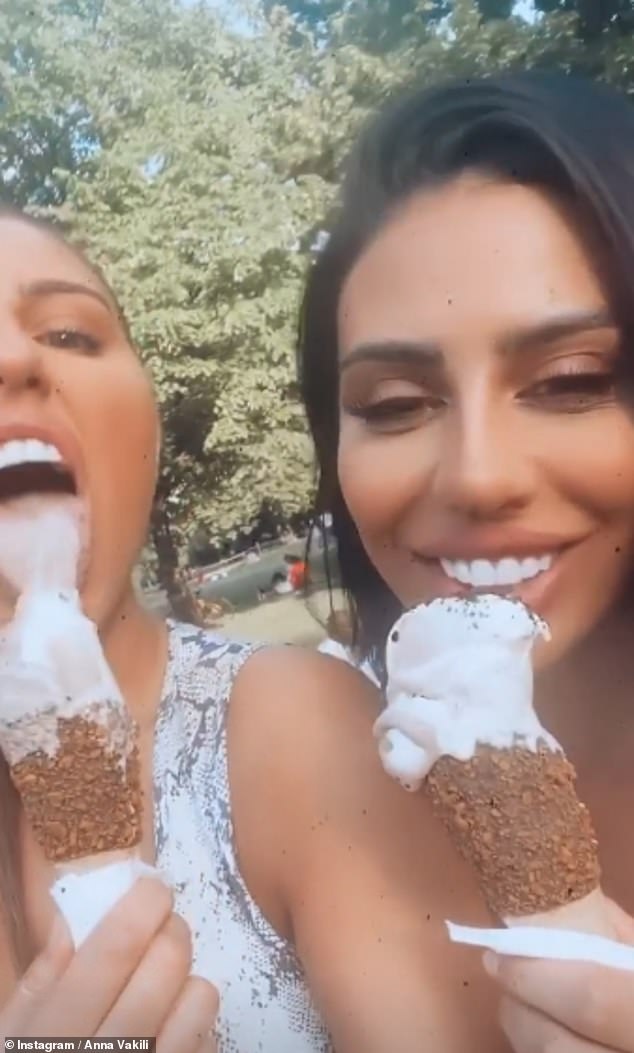 Calm before the storm: Anna and Mandi pictured enjoying ice cream before the incident took place 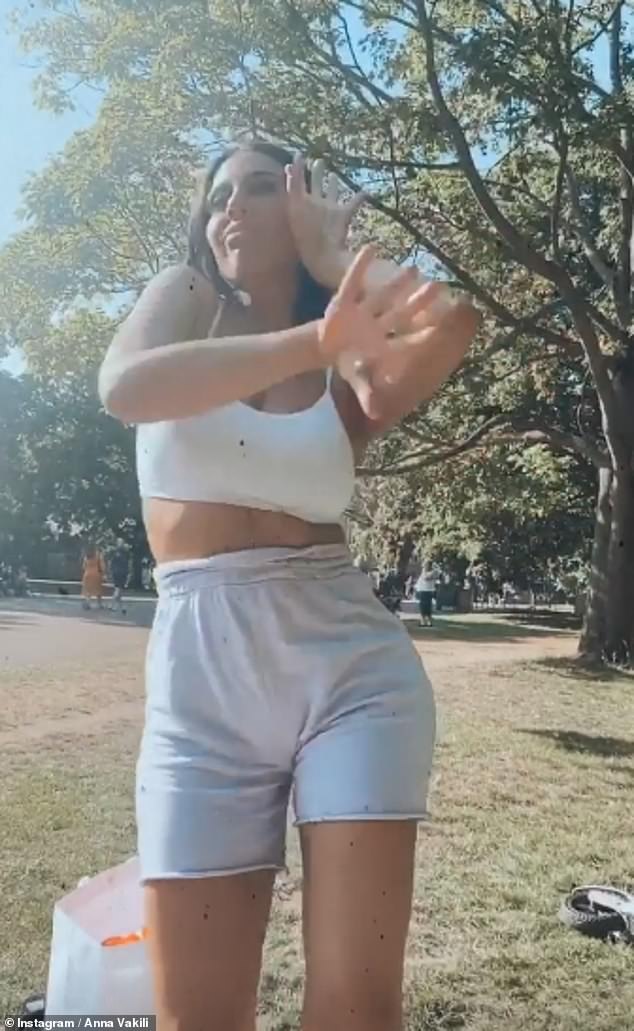 Having fun: The YouTuber enjoyed a boogie session as the group let loose amid the coronavirus lockdown

‘This could have been anyone’s sister or cousin, we are not doing this for followers, people using them as a brand, what are you guys doing? These are the kind of influencers that you’re shouting out.

‘We just saw the message Anna posted, wallahi [I swear to God] she is the biggest liar. It was only my cousin and sister, there were no drugs, no guns, no nothing. She has the audacity to lie, we have the evidence.

‘What drugs are you saying? If you want to talk about drugs, you do a drug test sunni. You got caught!’

A spokesperson for the Metropolitan Police told MailOnline: ‘We are aware of an allegation of assault in Hyde Park, on Monday, May 25, at approximately 20:00. We will attempt to contact the complainant to establish the circumstances.’

Since her stint on the ITV2 reality show in the summer of 2019, the brunette has spent the last few months working as a social media influencer and TV personality.

Last month, however, Anna revealed she would be returning to her job as a pharmacist, as due to the global coronavirus pandemic it ‘felt wrong not to’. 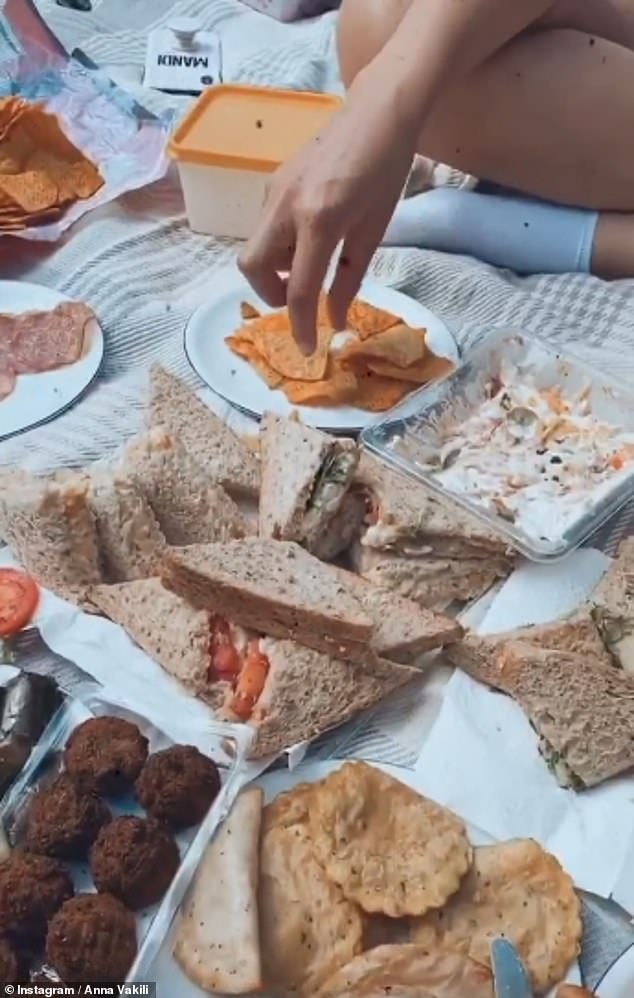 Tasty: The London native revealed she purchased the food, featuring falafel, sandwiches and coleslaw, from M&S