Love Island star Kaz Crossley has shockingly dismissed critics of the hordes of reality stars posting snaps of their lavish winter holidays amid the COVID-19 lockdown.

On Tuesday, her pal and fellow Love Island alum Amber Gill took to her Instagram Stories to explain to fans that she wasn’t posting much holiday content because she didn’t want to be ‘tone deaf’ as much of Britain is plunged into a Tier 4 lockdown.

But as Amber, 23, shared her video explanation to the fan question, 26-year-old makeup artist Kaz crassly yelled ‘f**k them!’ – prompting her friend to pause, before staring at her camera in stunned silence.

Before Kaz’s outburst, Amber wrote: ‘It’s tough at the minute for everyone. I try not to be too tone deaf. But it seems like everyone wants to see the content.’

She then said: ‘I’m not gonna lie, I’ve got some lush holiday content, but I don’t wanna rub it too much in people’s faces, because people seem to be annoyed…’

It was at that moment that Kaz interjected with her crude input, bringing an end to that particular video.

Amber continued to tackle the subject in a follow-up clip, as she said: ‘I mean, I get it, it’s a weird time for everyone. It’s even a weird time for me. I’m normally with my family at Christmas. Very, very odd.’ 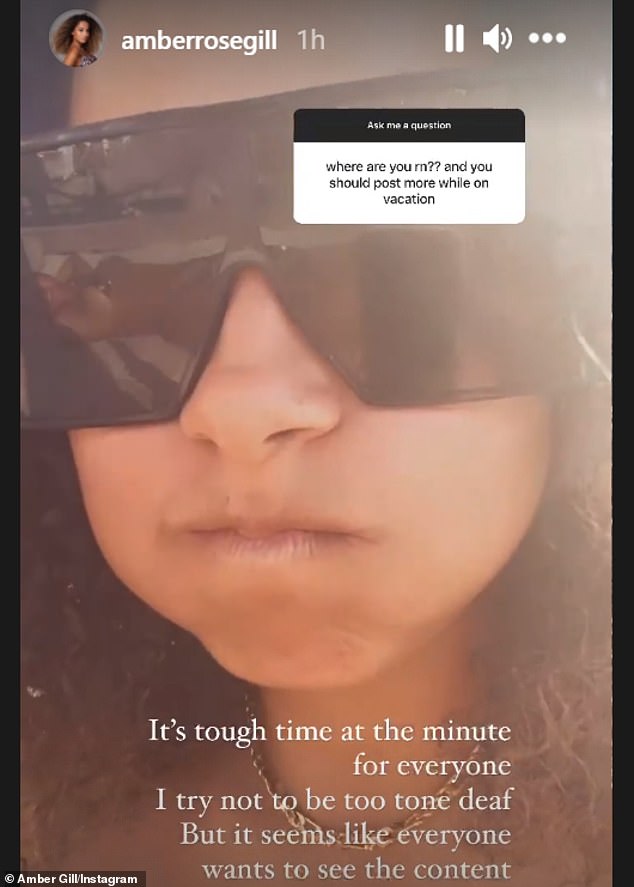 Stunned: Her pal Amber Gill was stunned into silence as the outburst came while she was trying to explain why she hadn’t been posting much content from her break

Hinting that she would soon be joining the host of reality stars in sharing her own holiday snaps, she continued: ‘People keep asking and saying I wanna live my live vicariously through you so you know what, I’m a give it to you.’

In a later video, a fan wrote: ‘I think it’s right not to share your hol when things are so bad in the UK. Bad for mental health.’

Amber responded with a host of captions that read: ‘I had to watch everyone in Dubai when I was sat in the house and I’m glad people are having a good time and enjoying life.

‘There is s**t going on in my own life and I don’t expect people to stop posting certain things because it makes me feel a type of way. But I do get it and that’s why I’m not a posty postersen.’ [sic] 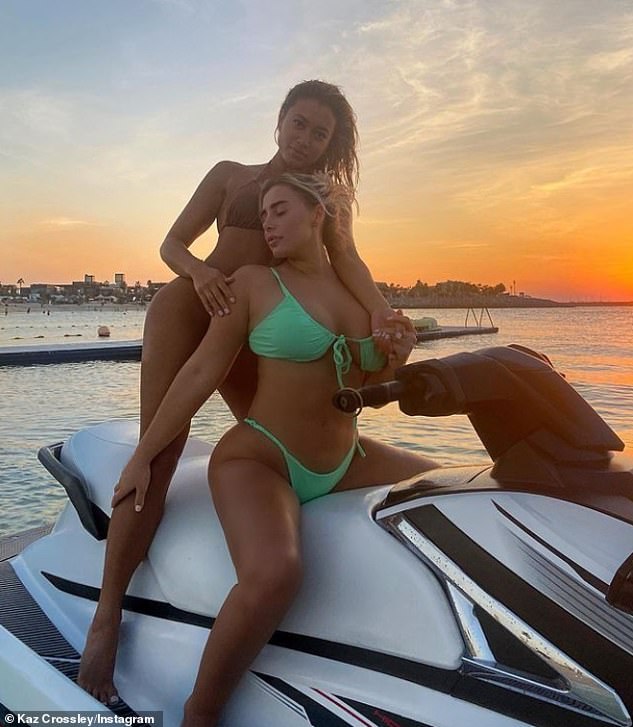 Living it up: Kaz has been living it up in Dubai this month, as millions of Brits have been plunged into a Tier 4 lockdown. Pictured with fellow Love Island star Ellie Brown

Speaking to the camera, Amber added: ‘I’m definitely gonna be more conscious, but I feel like there’s always suffering going on somewhere in the world.

‘And if I was suffering I wouldn’t expect people not to post their holiday pictures to make me feel better. Do you know what I mean? Not in a horrible way…’

Elsewhere, Geordie beauty Amber – who won 2019’s edition of Love Island with then-boyfriend Greg O’Shea – revealed that she was undecided about where to spend rapidly approaching Christmas day.

When asked if she’d be staying in Dubai, she said: ‘I haven’t actually decided yet. I was only supposed to be here for four days. 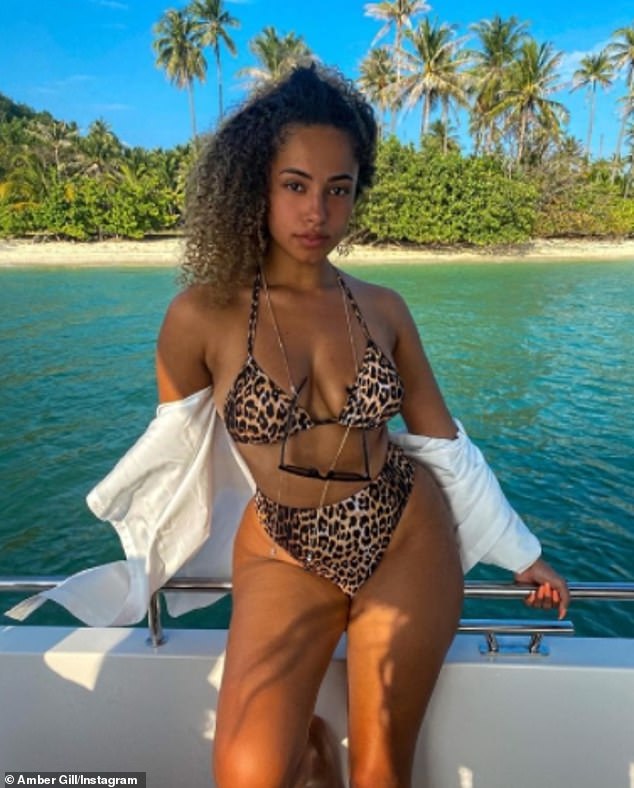 Waiting to post: Unlike her pal Kaz, Amber has yet to post any bikini snaps from her current break in Dubai. Pictured in January 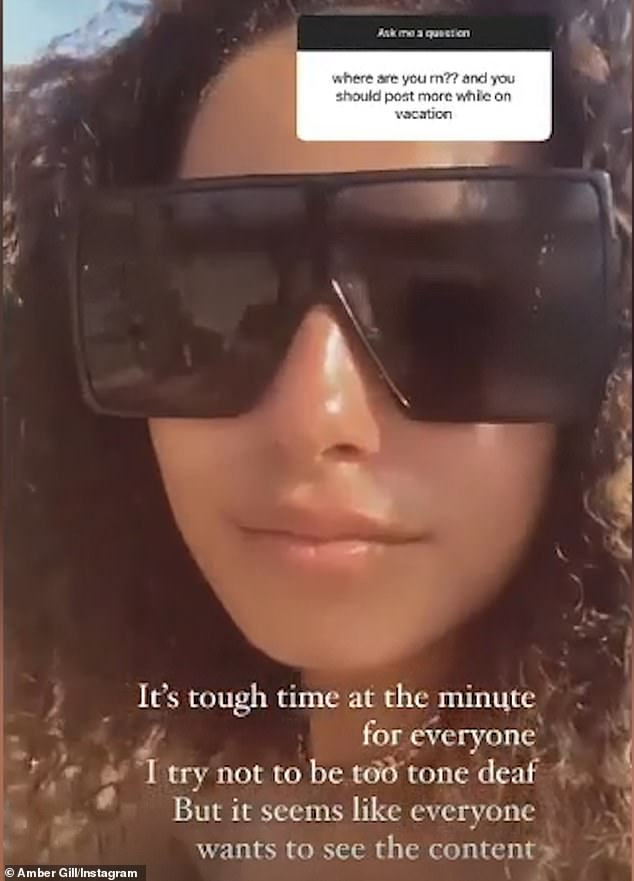 Content: Amber said of her reluctance to post, ‘I’ve got some lush holiday content, but I don’t wanna rub it too much in people’s faces, because people seem to be annoyed’

‘But then my mam rang us and was like, I’ve got such a big family and I would only be able to stay with one household and see one household. So it would just be such a massive shame. So I’m currently in the process of deciding what [to do].’

Amber also wrote: ‘It’s so sad I haven’t seen my grandma for like the whole of this year. The most I’ve done is waved at her from a window.’

As for why so many Love Island stars had flocked to the United Arab Emirates for their lockdown breaks this winter, Amber said: ‘I can’t answer for everyone else. I don’t know why everyone is here. I think it’s just the spot to go, isn’t it?

‘But I came for a little bit of work and my cousin was here and now Miss Kaz Crossley is here and I’m just having a nice little time.’

On Saturday, Prime Minister Boris Johnson slapped new draconian measures in a desperate bid to combat a surge in cases caused by a ‘mutant’ strain of coronavirus, just days after he said it would be ‘inhuman’ to cancel Christmas.

The extraordinary U-turn has ruined the plans of millions who intended on spending the holiday with families.

Under the new Tier 4 rules non-essential shops – as well as gyms, cinemas, casinos and hairdressers – have to stay shut and people are limited to meeting one other person from another household in an outdoor public space.

Those in Tier 4 were told they should not travel out of the region, while those outside were advised against visiting.

In the rest of England, Christmas easing has been severely curtailed, with households allowed to gather for just one day – Christmas Day itself – rather than the five days previously planned.

Meanwhile, several countries have banned flights from the UK as they also battle to reduce the infection rate. 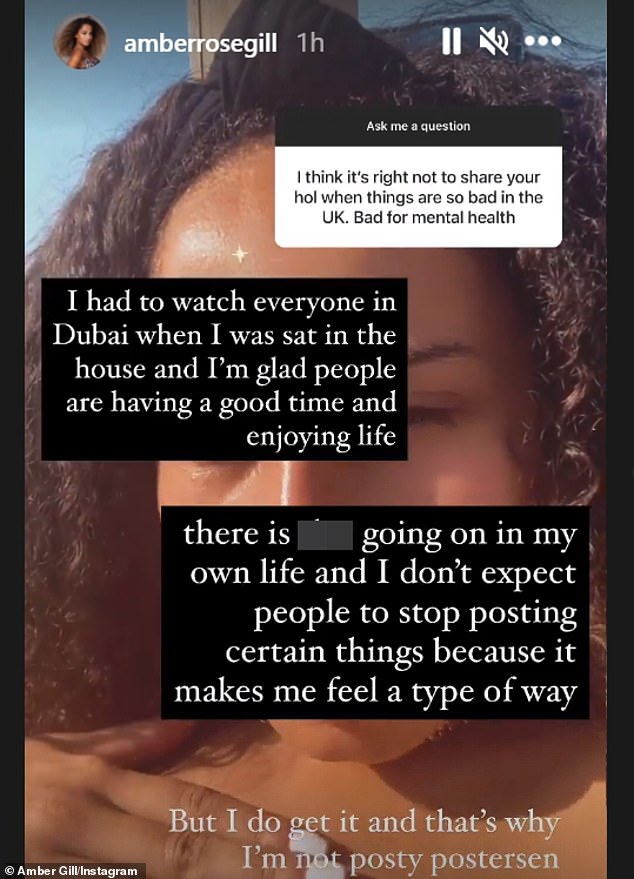 Snaps: In a later video, Amber shared her reasons why she thought it was acceptable to post snapshots from her lavish break, which she revealed may not extend beyond Chritmas