A mother who died along with her three young daughters in a catastrophic house fire had allegedly separated from their father just weeks earlier, according to neighbours.

Emergency crews rushed to the townhouse on Tulloch Grove in Glen Waverley in Melbourne’s eastern suburbs about 1.40am after the property’s garage caught alight.

Kaoru Okano and her three girls – aged three, five, and seven – had tried in vain to take cover from the blaze in the en-suite as the suburban home became engulfed in smoke.

Neighbours told Daily Mail Australia her husband, Hiroyuki Kikuchi, was black with soot as he attempted to douse the flames. 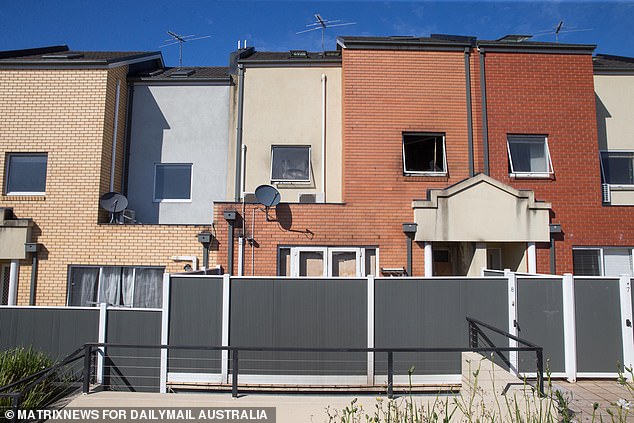 The young family had now chance of escaping the inferno 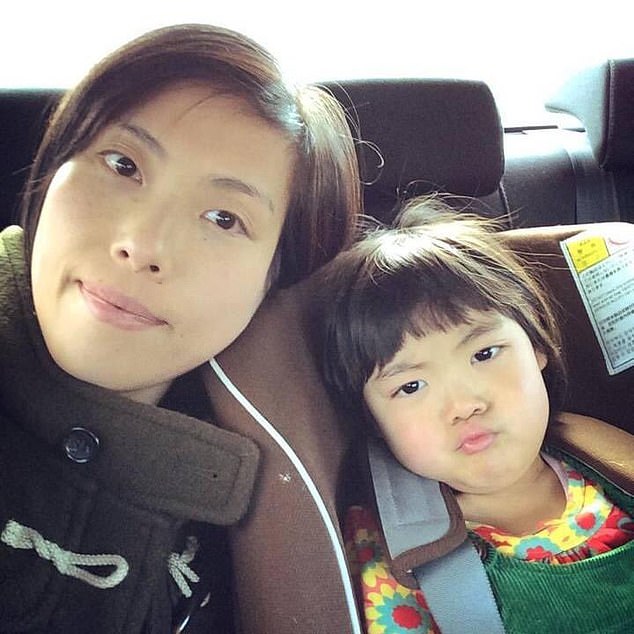 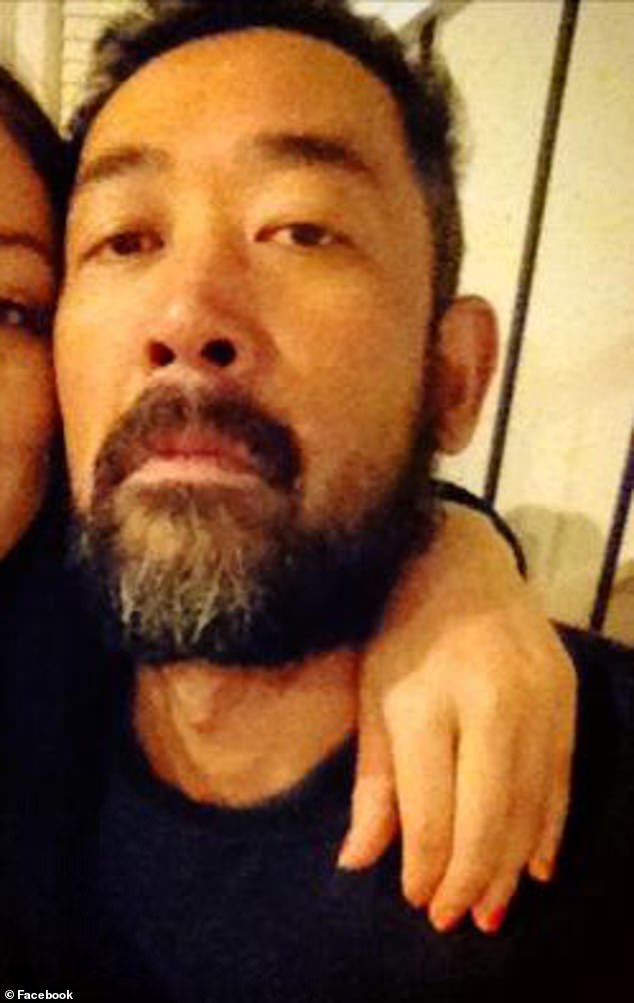 Neighbours told Daily Mail Australia her husband, Hiroyuki Kikuchi, (pictured) was black with soot as he attempted to douse the flames

‘He was out the front. His face was black,’ Hanish Poonia said on Monday.

Neighbours had noted Mr Kikuchi had been been notably absent from the property for the past few weeks.

It is not suggested that Mr Kikuchi was in any way involved in commencing the house fire.

Police investigators are treating the blaze as suspicious and the home remained cordoned off as detectives combed through the scene on Sunday.

A 50-year-old man, believed to be the father of the dead children, escaped the flames but was taken to hospital in a serious condition where he remains under police guard.

Neighbours have described seeing the family return home in the hours before the tragedy.

They had appeared happy, with the children enjoying ice-creams.

Alex Rodriquez said it appeared like any ordinary night in the neighbourhood until they woke to the sounds of screams and ‘banging’.

‘My brother told us to get out as quickly as possible,’ he said.

Mr Rodriquez said the tragedy had shocked residents across the adjoining townhouses.

‘The mother was beautiful. She was a wonderful, devoted, loving mother – the girls were beautiful and that’s what’s the saddest part about it.

‘I saw them every single day going to school, the mum taking them. They were beautiful.’

On Monday, friends and strangers alike attended the property to leave flowers and other tributes to the family. 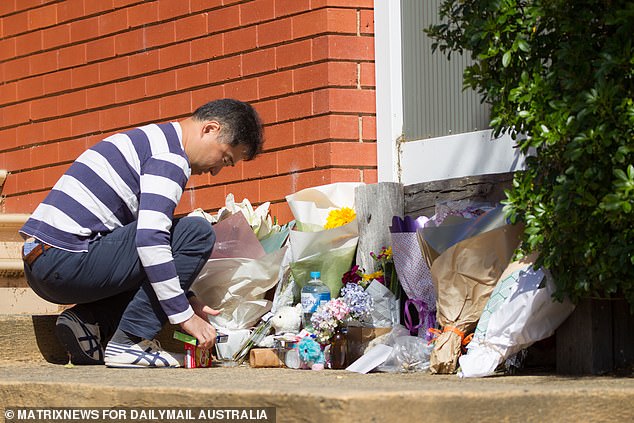 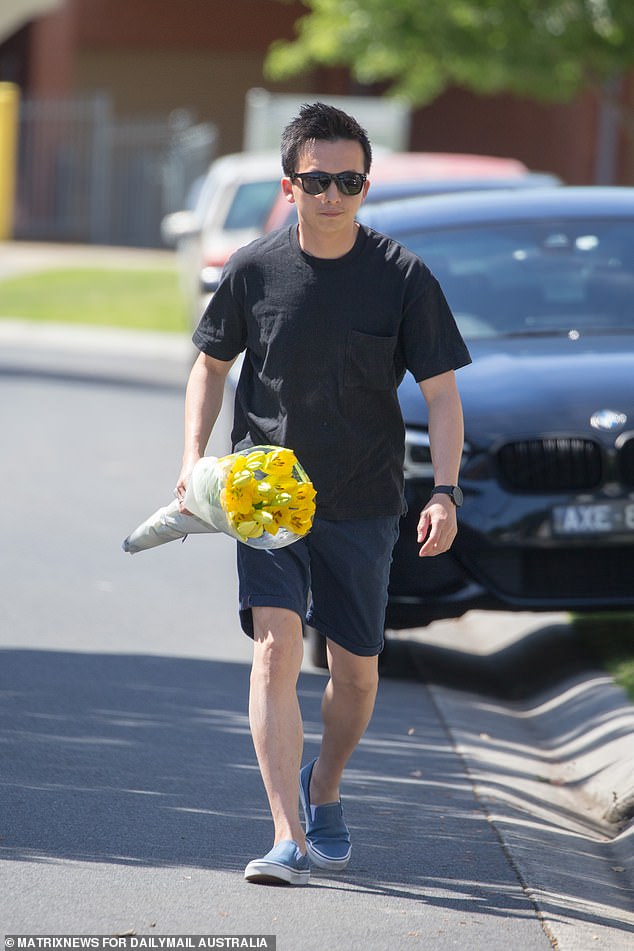 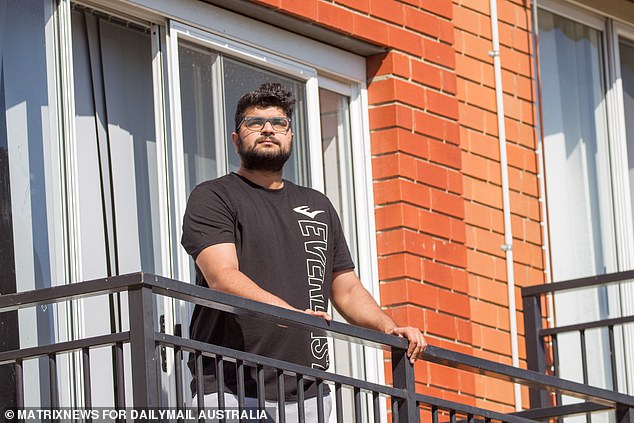 Hanish Poonia lived directly next door to the family. He saw their father covered in black soot as he attempted to help stop the blaze 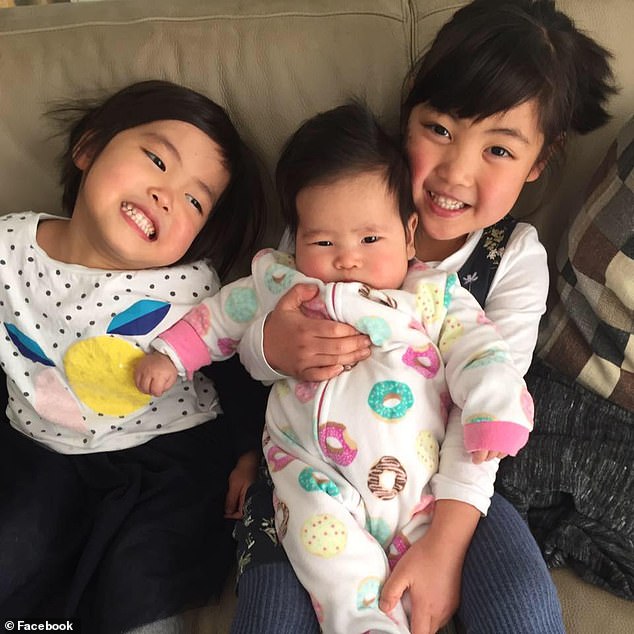 Fire investigators were among those that returned to the home, checking licence plates in the car park underneath the rows of townhouses.

Police said it may be 24 to 48 hours before the man taken to hospital is capable of being interviewed.

Neighbours have spoken of the chaotic moments that claimed the lives of the young family.

It took only minutes for the fire, which is believed to have started in the garage below the property, turned into an inferno.

The garage was reportedly full of flammable materials such as oils, chemicals and rubbish.

Mr Rodriguez, whose partner is on crutches, said they had no time to render assistance.

‘We had to get out as quickly as possible and the fireys were all screaming at us to leave, so we had to just get out,’ he said.

Neighbours have described the family as ‘ordinary’, with no apparent signs of conflict within the home. 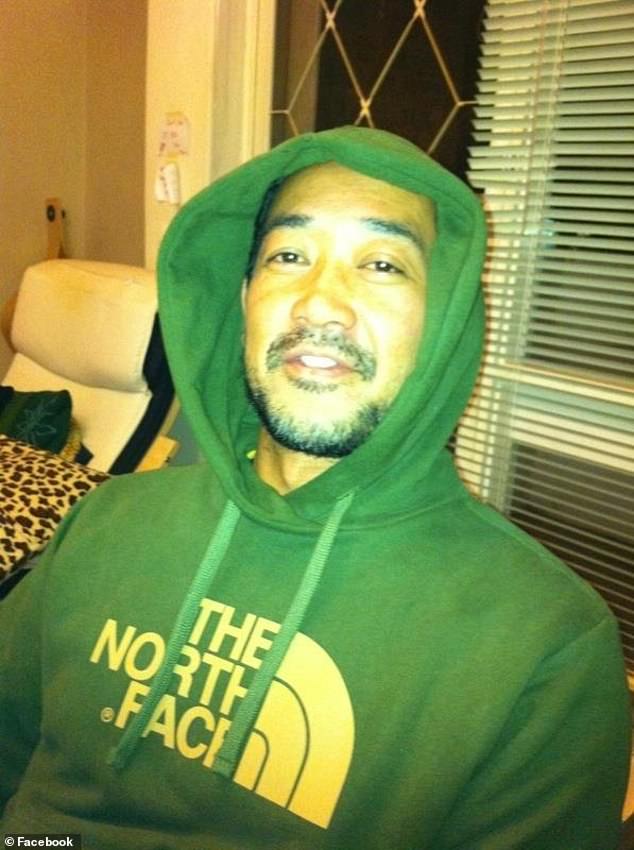 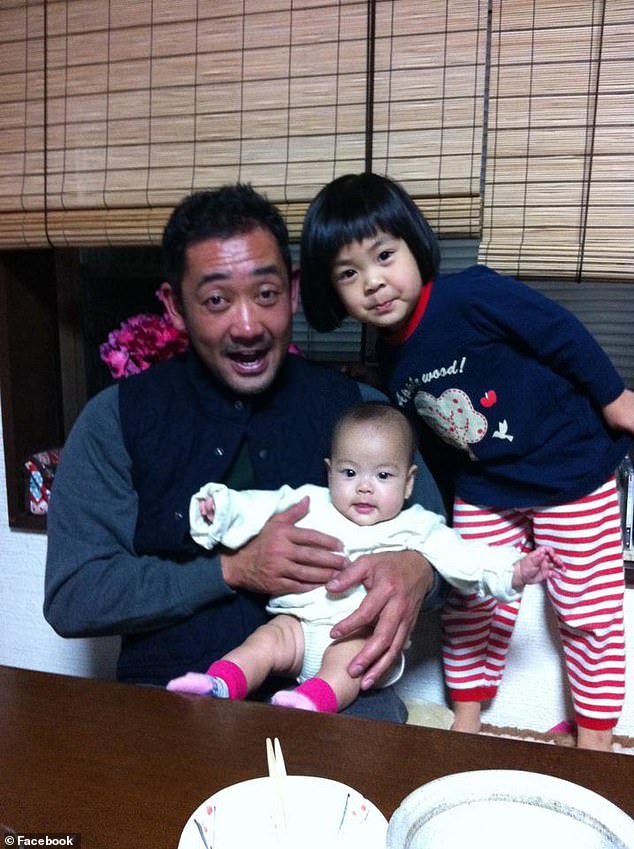 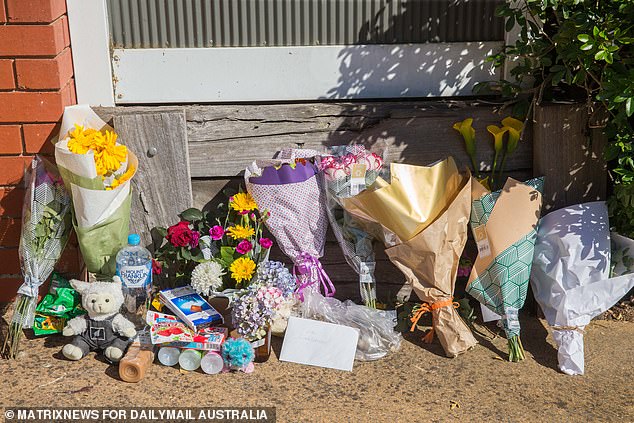 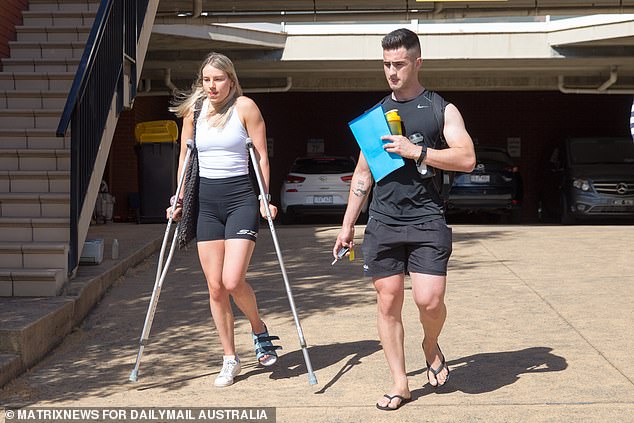 Alex Rodriguez (right) and his partner were forced to flee their own home as the inferno took hold. 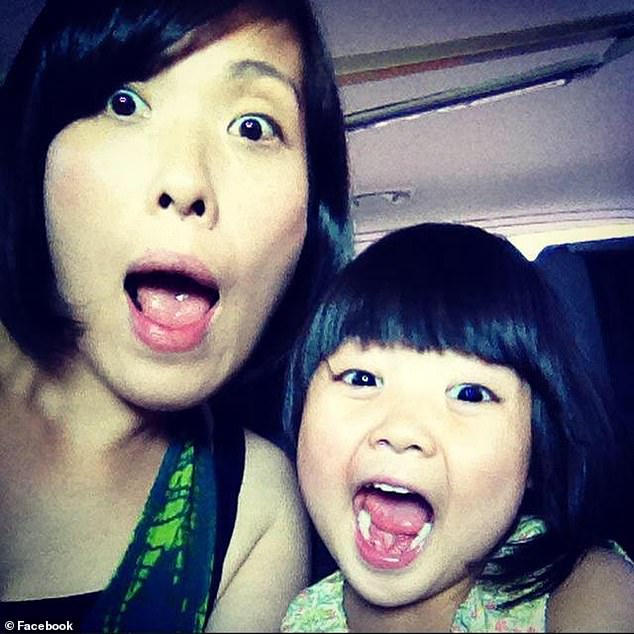 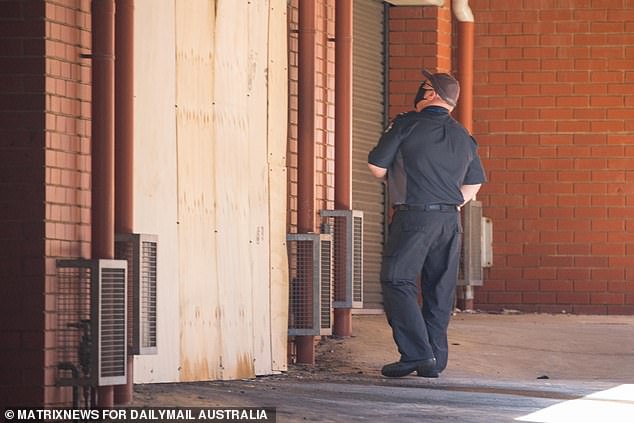 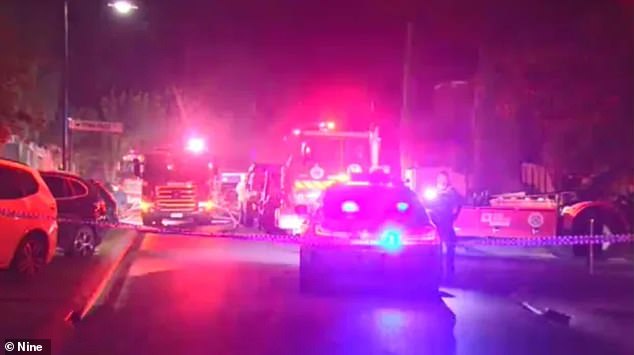 The house fire has also left another man in hospital with serious injuries (pictured, police at the scene on Saturday night)

‘We’ve just noticed that the father hasn’t been around the past few weeks. And he lived here,’ a neighbour said.

Ms Okano had regularly posted loving photos of her children on Facebook smiling and playing together.

Her husband is believed to own a Japanese restaurant in Richmond in Melbourne’s inner-city.

Detective Senior Sergeant Neville Major said the bodies were found ‘huddled together’ in the bathroom.

‘There has been a very tragic incident here. There is a lot of damage in the garage area and the house has been engulfed in smoke,’ he said.

It took 35 firefighters several hours to bring the blaze under control, at which point they found the four bodies in the wreckage.

Authorities are working to determine the cause of the fire, but the arson squad has been drafted in to investigate.

The tragedy comes just a month after another fire, allegedly deliberately lit, claimed the lives of three Melburnians.

Abbey Forrest, 19, Inda Sohal, 28, and their baby daughter Ivy were all killed in the blaze at Point Cook in Melbourne’s south-west.

Jenny Hayes, 46, was arrested and charged with three counts of murder and arson causing death after allegedly starting the fire.

Anyone with further information on the Glen Waverly blaze is urged to contact Crime Stoppers on 1800 333 000. 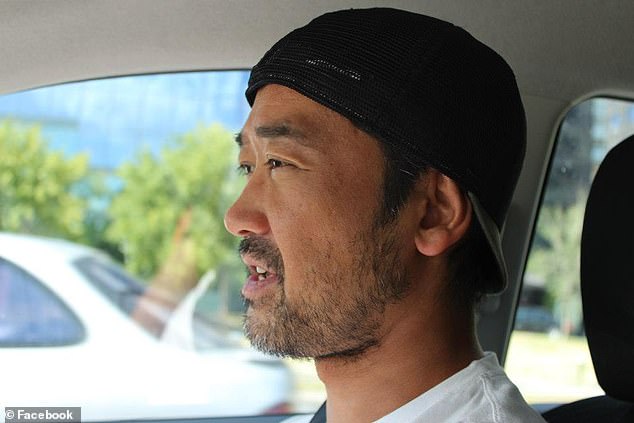 Hiroyuki Kikuchi remains in hospital after the tragic fire 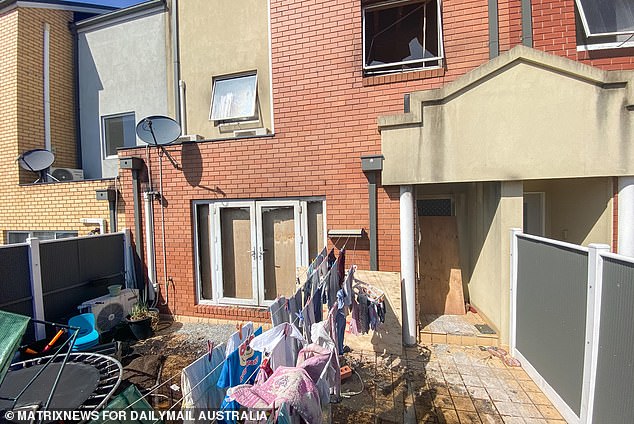 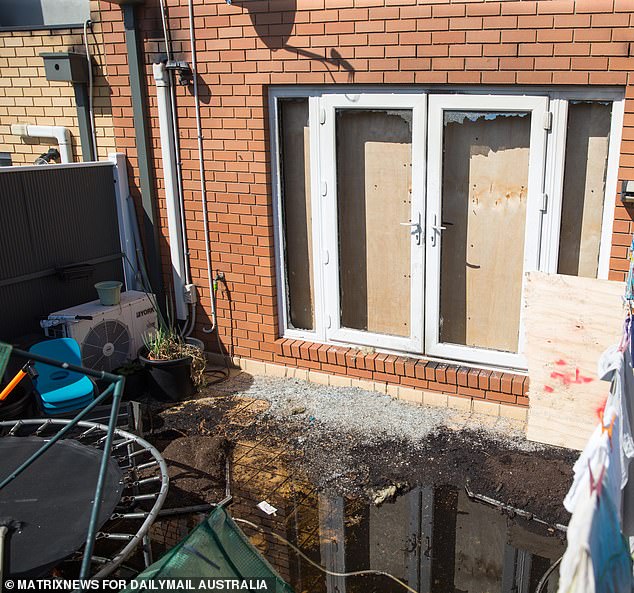 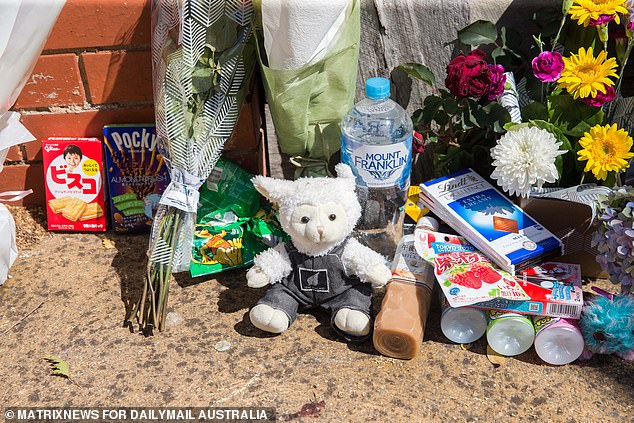