For all of the upsets and general pandemonium that defined the first five rounds of the NCAA Men’s Basketball Tournament, Saturday’s Final Four in San Antonio has its familiar cast of teams.

Midwest Champion Kansas remains one of college basketball’s iconic programs after reaching the NCAA Final nine times and winning three titles – most recently in 2008 – since the program was started by basketball’s inventor, Dr. James Naismith, in 1898.

And then there is the undeniable exception: Loyola-Chicago and its irrepressible team chaplain, Sister Jean Dolores-Schmidt.

The 98-year-old nun has left an indelible mark on this year’s NCAA Tournament, with her scouting reports and T-shirt-ready advice – ‘Worship, work and wisdom’ – lending an almost otherworldly credence to the idea that, in sports, anything is possible.

Like the other three schools, the Ramblers have a national title in their trophy case, but theirs dates back to 1963, when college basketball was more regionalized and the NCAA Tournament featured just 25 teams.

Now, in the age of the 68-team field, the 11th-seeded South Regional champion looks to become the most unlikely national champion in the history of college basketball.

Loyola-Chicago chaplain Sister Jean Dolores Schmidt, leads the team in brayer before the first half of the Ramblers’ Elite 8 win over favored Kansas State on Saturday, March 24 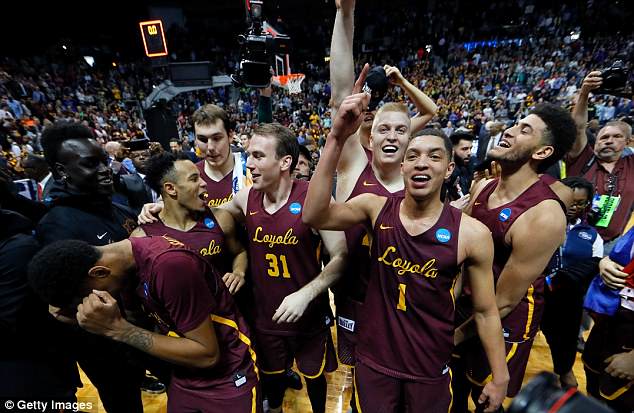 Cameron Satterwhite (No. 23,) Cameron Krutwig (No. 25), Lucas Williamson (No. 1), Nick Dinardi (No. 44) and Christian Negron (No. 12) of the Loyola Ramblers celebrate their teams Elite 9 victory over the Kansas State Wildcats last Saturday in Atlanta 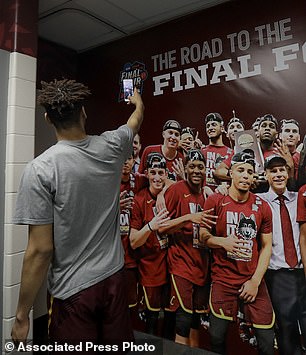 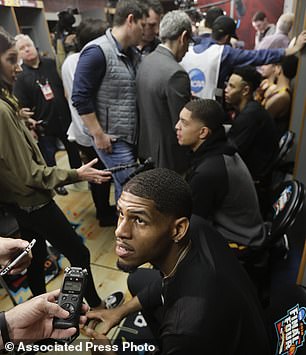 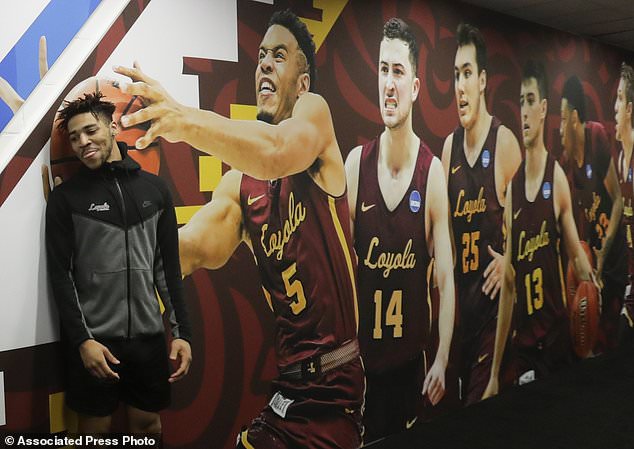 ‘We dreamed of getting to this moment, and now we’re here,’ said Loyola-Chicago senior Aundre Jackson, a native Texan. ‘It’s a challenge to deal with all of this, but I think we deserve the attention. We’ve worked really hard for it.’

It’s an unusual amount of attention the Ramblers, who have not reached the NCAA Tournament since 1985 and play their home games in a tiny, 4,486-seat arena on Chicago’s north side.

Now Loyola prepares to play third-seeded Michigan in Saturday’s early game at the Alamodome, which can hold as many as 39,500 screaming fans. 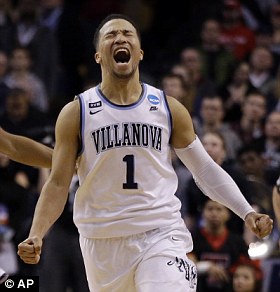 By the Associated Press

A long list of goals has taken up permanent space on Jalen Brunson’s wall, including becoming a conference player of the year, an all-American and helping Villanova win a second national championship in three seasons.

The junior point guard just reached another one by becoming The Associated Press men’s college basketball player of the year.

Brunson was presented with the award Thursday at the Final Four, where the Wildcats will face Kansas Saturday in the national semifinals. He earned 36 of 65 votes from the same panel that selects the AP Top 25, with ballots submitted before the start of the NCAA Tournament.

‘It’s written on my wall,’ Brunson said of being an All-American and player of the year in a recent interview with the AP.

‘We love it. It’s all hype,’ Ramblers guard Adarius Avery said. ‘I feel like we have a lot of confidence, even though it’s our first time doing anything like this.’

The unlikely Ramblers are downright dazzled by the Final Four festivities, but it’s also a new experience for the players at Kansas and Michigan too.

Jayhawks star Devonte Graham did a double take when he saw larger-than-life photos of himself and several teammates lining the Alamodome hallway outside the Kansas locker room.

‘Yeah, OK, I took some pictures of it,’ Graham said with a laugh.

Several Villanova players already won it all in Texas two years ago when they watched Kris Jenkins’ buzzer-beating 3-pointer to down North Carolina. The media obligations, fan frenzy and difficult game preparations are nothing new to Jalen Brunson, the junior guard named the AP’s Player of the Year on Thursday.

‘I think it’s definitely an advantage for us that we’ve been through it before,’ Brunson said. ‘But we still have to go through it. There’s going to be a lot of things going on in the next couple of days, but I’m enjoying it because I’m out here with my brothers and getting to be in this moment.’

Villanova’s flight encountered turbulence on its descent into Texas, but Mikal Bridges calmed nervous flyer Eric Paschall. The Wildcats can cement their status as a modern college basketball power with their second title in three years, but a showdown with the powerful Jayhawks looms.

The Wolverines realize most of the country will be rooting against them when they take on Loyola, but that doesn’t detract from the excitement – and it certainly won’t matter to the large crush of maize-and-blue fans expected to invade the Alamodome after an outstanding turnout in Los Angeles last week.

‘We got in late and we got up early,’ said Moe Wagner, Michigan’s high-scoring German big man. ‘It’s been pretty busy since we got in. A lot of talking and running around. But like I always say, it beats the alternative. It’s surreal, but it’s a great opportunity, and these people in this locker room are the best guys to share it with.’

The next few days will be surreal for every player – but particularly for Loyola-Chicago, it seems. 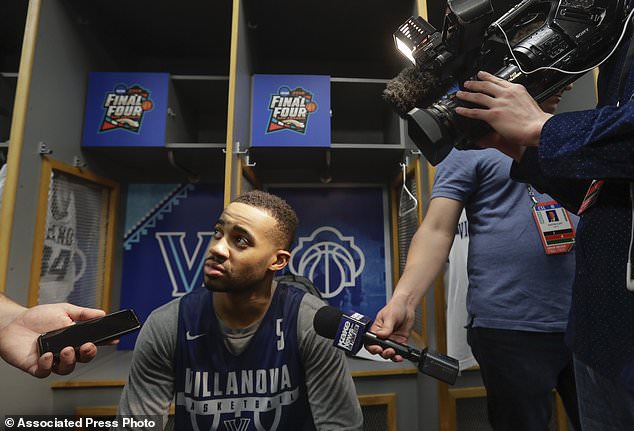 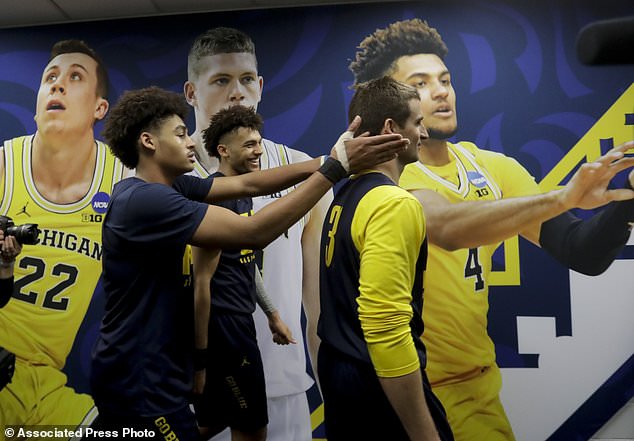 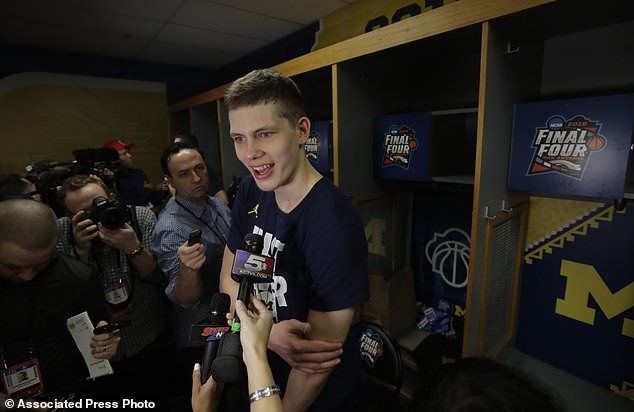 When the Ramblers reached their team hotel, they got another thrill from a brief visit with Russell Westbrook. The NBA MVP is in town with the Oklahoma City Thunder to face the San Antonio Spurs on Thursday night.

‘I was standing next to him, trying to see how tall I was,’ said Jackson, who got a photo with the UCLA product. ‘He just [said], ‘Good luck and go ahead and win it.”

While the Ramblers are thrilled to be in the Final Four, Kansas can be described as ‘relieved.’

The Jayhawks had a No. 1 seed for the third straight year, but lost in the Elite Eight the past two seasons – including in 2016 to Villanova, as the Wildcats marched to the national title.

‘You think about it, hey, in their careers all we’ve been is the No. 1 overall seed, the No. 2 overall seed and the No. 3 overall seed and haven’t gotten to a Final Four,’ coach Bill Self said after Sunday’s overtime win against Duke in Omaha, Nebraska. ‘So that means that these guys have done so well to put us in a position but we hadn’t kicked the door in yet.

‘I’m happy for us, staff, school, everything, but I’m more happy for these guys because they deserve to experience what the best of college basketball is – and that will be what takes place Saturday and Monday.’ 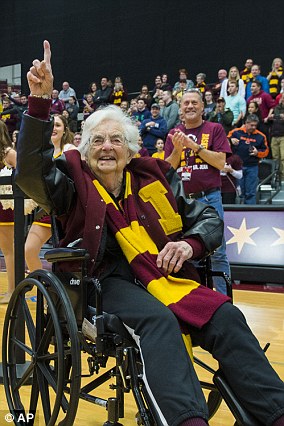 Sister Jean Delores Schmidt, the team chaplain for NCAA Men’s Basketball Tournament Cinderella Loyola-Chicago, now has something in common with the team’s players: The school can license her image.

‘Sister Jean’, as she has been known throughout the 11th-seeded Ramblers’ improbable march to this weekend’s Final Four in San Antonio, succumbed to overwhelming demand and agreed to let her name and image be used by the school’s athletic department, according to ESPN.

‘We weren’t going to do anything until she gave her blessing,’ said senior associate athletic director Tom Sorboro.

And like the players, who cruised to their easiest win of the tournament on Saturday – a 78-62 win over ninth-seeded Kansas State in the South Regional Final – Sister Jean won’t be receiving any monetary compensation for use of her name or likeness.

‘She didn’t ask for anything for herself,’ Sorboro said of the 98-year-old nun.

The school has reportedly approved more than 25 Sister Jean T-Shirts from several different companies. One shirt has a quote from her – ‘Worship. Work And Win.’ – while others feature her face with the school’s logo. 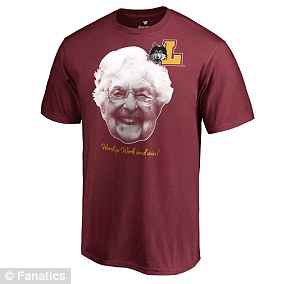 The school has reportedly approved more than 25 Sister Jean T-Shirts from several different companies. One shirt has a quote from her – ‘Worship. Work And Win.’ – while others feature her face with the school’s logo. Proceeds will go to the school’s athletic fund

The school previously released Sister Jean bobbleheads back in 2011, and reproduced the bobblehead in 2015, but that was before Loyola-Chicago’s re-emergence on the national basketball consciousness.

Now sales of another reproduction of the figurine have soared to the heavens.

Phil Sklar with the soon-to-be-open museum in Milwaukee says that within 24 hours, the bobblehead became the institution’s top seller of all time.

The bobblehead depicts Sister Jean wearing a black Loyola warmup jacket and a scarf. Her shoes even have ‘Sister’ and ‘Jean’ on the back of them.

The licensing royalties for everything besides the bobbleheads will go to the Loyola Athletic Fund, which supports the school’s athletic department.

The bobblehead proceeds will go to Sister Jean’s Sisters of Charity of the Blessed Virgin Mary. 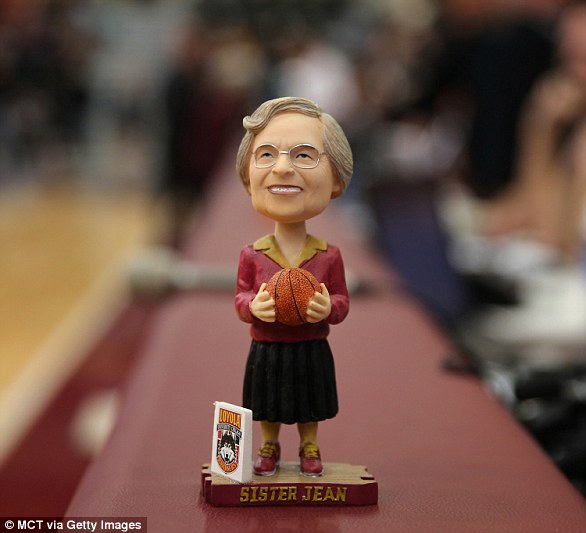 Sister Jean’s bobblehead is already a top seller. Proceeds will go to Sister Jean’s Sisters of Charity of the Blessed Virgin Mary

FORESHADOWING?: If you’re into good omens, note that Kansas won its last title in San Antonio by beating North Carolina and Memphis under Self a decade ago. And that was the program’s first since Danny Manning and The Miracles won the 1988 title as a No. 6 seed – now an even 30 years ago.

So maybe years ending in eight bring a bit of luck for the Jayhawks?

RANKING THE SEEDS: Villanova was the No. 2 overall seed behind Virginia on Selection Sunday, putting the Wildcats as the headliner followed by Kansas at third. Michigan was No. 11 and Loyola-Chicago was No. 46.

WINING UGLY: Villanova and Michigan should arrive in Texas with an extra bit of confidence after winning games when they shot poorly.

TITLE HISTORY: Top seeds have hoisted the trophy on the final Monday night of the season in 18 of the past 26 NCAA Tournaments, while No. 3 seeds have won three times (Syracuse in 2003, Florida in 2006, Connecticut in 2011) in that span.

Villanova remains the lowest-seeded team to win a title as a No. 8 in 1985.

NOT SO WILD AFTER ALL: With all the upsets, it sure looked like the Final Four had a chance to be filled with surprises. It didn’t end up that way.

The last two of those were the most recent to feature an 11-seed before Loyola-Chicago’s run, with George Mason getting there in 2006 and VCU doing it in 2011. The only other Final Four to feature a No. 11 seed came in 1986 with LSU, though the combined seed total was 15 on the strength of 1-seeds Duke and Kansas, and 2-seed Louisville (the eventual champion behind freshman Pervis Ellison) joining the Tigers in Dallas.

ACC’S MISS: The Atlantic Coast Conference was trying to get a team into the national-title game for the fourth straight year but ultimately fell short of the Final Four.

Duke won the championship in 2015. Rival North Carolina lost to Villanova in the 2016 title game before coming all the way back and winning the 2017 title against Gonzaga. And 10th-seeded Syracuse was a surprise semifinalist in 2016 after upsetting No. 1 seed Virginia in a regional final.

IMPROVED NUMBERS: ESPN said none of the 17.3 million entrees had the Elite Eight teams correct in its Tournament Challenge picks contest. But 550 people correctly had the Final Four teams.

Villanova was the most popular pick to get there, winning the East Region on 58.4 percent of the submitted brackets. 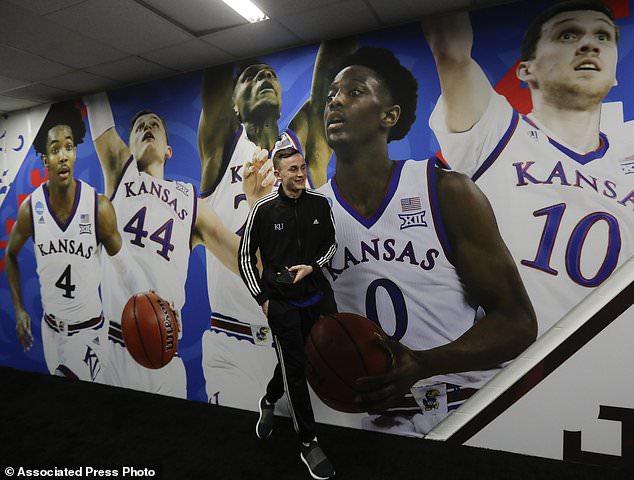 Kansas’s Mitch Lightfoot walks past a picture of himself on the wall before a practice session for the Final Four NCAA college basketball tournament, Thursday, March 29, 2018, in San Antonio. (AP Photo/Eric Gay) 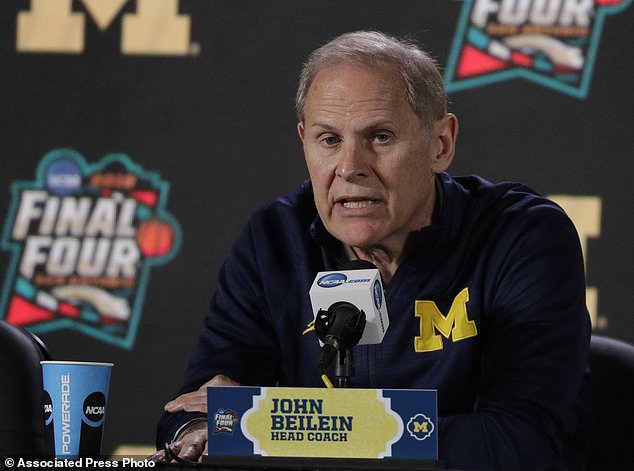