A probable cause affidavit filed by the Palm Beach Police Department is revealing new details about the arrest of Luann de Lesseps in the early morning hours of Christmas Eve.

Officer Robert Mastrangelo wrote in the report that he arrived to room 407 at The Colony Hotel when security guard Carlos Lopez called to report that de Lessesps and an unidentified male had broken into another guest’s room and were refusing to leave after he discovered them in bed together.

That mystery man had fled the scene by the time Officer Mastrangelo showed up at the scene, but de Lesseps was with another woman, her friend Julie Marie Olson.

‘It should be noted that both smelled of an unknown alcoholic beverage, had slurred speech and appeared to be highly intoxicated,’ stated the affidavit.

‘I asked both females to exit the room, Olson left however de Lesseps refused to leave and locked herself in the bathroom.’

Olson then went home it seems, posting a photo of herself standing in her kitchen at around the same time de Lesseps was being booked on four felony counts.

Friendly face: The probable cause affidavit filed by Officer Robert Mastrangelo reveals that Luann de Lesseps was with two people in a hotel room night of her arrest, inclduiong Julie Olson (Olson and de Lesseps in March) 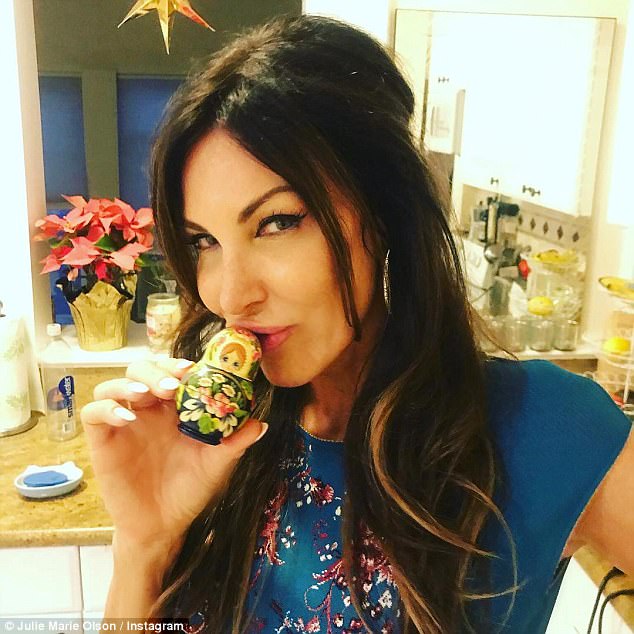 Smart move: The affidavit reveals that de Lesseps, 52, was with her friend Olson police arrived on the scene, with Olson agreeing to leave the room when asked (Olson above shortly after leaving the hotel early Sunday) 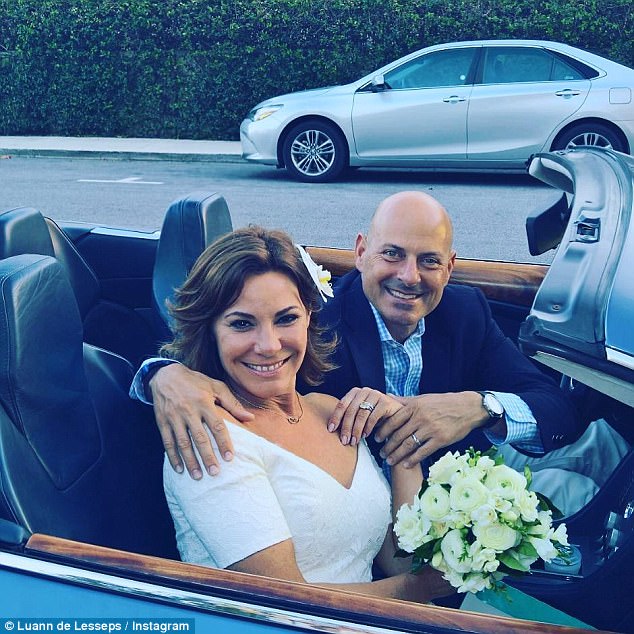 Fonder memories: The Colony is the same location where de Lesseps and her ex-husband Tom D’Agostino had their New Year’s day bridal brunch earlier this year (couple above leaving their bridal brunch)

De Lesseps and Olson had been seen earlier in the evening while getting ready to go out in video posted to the reality star’s Instagram account.

The Real Housewives of New York star, 52, can also be seen smiling alongside Olson in a photo posted back on March.

‘Last weekend with Tom and Luann D’Agostino on their boat! Fabulous time with the best couple ever!!! BFF’s! Luann and I go back to the 90’s when we were modeling and doing television shows together in Milan, Italy! Amazing memories … Thank you, Lu!’ wrote Olson.

That photo, which shows the two woman out on the water in their bathing suits, appears to dispute de Lesseps’ claim that she had not returned to Palm Beach since her wedding to D’Agostino last New Year’s Eve.

The couple celebrated their nuptials with a bridal brunch the next day, which was held at the same hotel where Luann was arrested on Sunday.

De Lesseps’ charges stem entirely from her treatment of the police officers who arrived on the scene and tried to get her out of the room over the weekend and into her own, which was one floor below in 327.

Officer O’Leary eventually opened the bathroom door to try and detain de Lesseps according to the affidavit, at which point she ‘shoved Officer O’Leary with an open palm to the chest, then slammed the door on Officer O’Leary’s face, striking him in the forehead.’

She resisted again as Officer O’Leary placed her in handcuffs, and managed to get out of the shackles once she was in the patrol car. 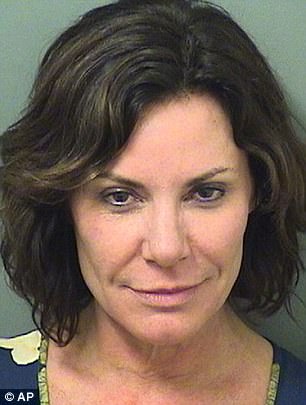 Mugging for the camera: News of her arrest was first reported by The Palm Beach Post

De Lesseps ‘attempted to exit the vehicle’ at thsat point, and as she was pout back in and cuffed once more she told Officer Mastrangelo: ‘”i’m going to f***ing kill you.’

At the same time she ‘tried kicking the door to keep it from closing.’

She was taken to the station at that point, telling both officers along the way that she was ‘going to f***ing kill you all.’

De Lesseps was seen for the first time since her court appearance while enjoying a beachside barbecue on Christmas day at her brother’s home in Jupiter.

It is unclear if she was drinking but she was sitting in front of an open bottle of wine.

The reality star, 52, arrived at the Palm Beach Courthouse just after 9am on Sunday, almost eight hours after she was taken into custody and booked by police.

The Real Housewives of New York star got no sleep it seemed as she stood in front of the judge with her limp and greasy hair covering her face, make-up smeared and wearing the same soiled dress she had on Saturday night when she first hit the town.

At one point during the proceedings de Lesseps attempted to respond when Judge Ted Booras mentioned she might have a drinking problem, but was quickly told to remain silent.

‘Don’t say anything,’ ordered Judge Booras, who seemed concerned that de Lesseps might incriminate herself with her response.

News of her arrest was first reported by The Palm Beach Post, while WPVI captured the reality star during her court appearance early Sunday.

Judge Booras informed de Lesseps that she needed to hire a lawyer for the ‘serious charges’ she is facing, just before releasing her from custody.

De Lesseps was told she could return to her home in New York because this was her first offense according to the judge, who also allowed her to forego posting any bail and instead released her on her own recognizance.

‘I don’t think it would be that hard to find you,’ said Judge Booras of the Housewives star, who had been filming the upcoming season of her show just days before in New York City. 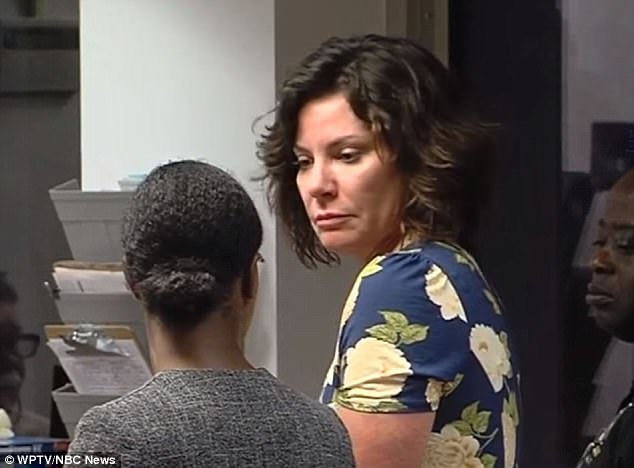 Worse for the wear: De Lesseps, 52, appeared in Palm Beach County Courthouse on Sunday (above) after her arrest earlier that day at a nearby hotel 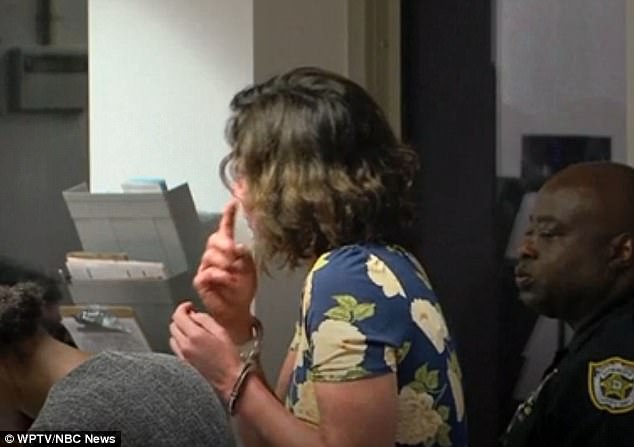 Multiple counts: She is charged with battery on law enforcement officer, disorderly intoxication, resisting an officer with violence and two counts of corruption by threat

De Lesseps, who appeared with a public defender for her court appearance, is now facing five counts – four felonies and one misdemeanor.

She will be back in court next month to address those charges: battery on a law enforcement officer, disorderly intoxication, resisting an officer with violence and two counts of corruption by threat.

Battery on a law enforcement officer is considered a third-degree felony which is punishable by a maximum of 5 years in prison and a $5,000 fine.

The disorderly intoxication charge is a second-degree misdemeanor which is punishable up to 60 days in jail and a $500 fine.

Resisting an officer with violence is a third-degree felony which could land de Lesseps behind bars for 5 years and forced to pay a $5,000 fine.

This means that de Lesseps could find herself behind bars for more than a decade in the wake of her arrest.

A few hours after her court appearance, de Lesseps addressed her arrest on Twitter.

‘I want to offer my most sincere apologies to anyone that I might have offended with my behavior,’ wrote de Lesseps.

‘This was my first time in Palm Beach since my wedding and being here brought up buried emotions. I am committed to a transformative and hopeful 2018.’

That ‘transformative’ 2018 will include at least one more trip to palm Beach for de Lesseps, who is due back in court on January 25, at which point the state with formally file charges in the case.

It almost one year ago to the day that de Lesseps married Tom D’Agostino in Palm Beach, seven years after her divorce from Count Alexandre de Lesseps.

She and the Count have two children, Victoria and Noel, who both appear to have been in France with their father at the time of de Lesseps’ arrest.

De Lesseps’ marriage to D’Agostino, which her Bravo co-stars all said they thought was doomed from the start, was over by August and the two have since finalized their divorce.

D’Agostino was also in Palm Beach over the weekend with his new girlfriend Anna Rothschild. 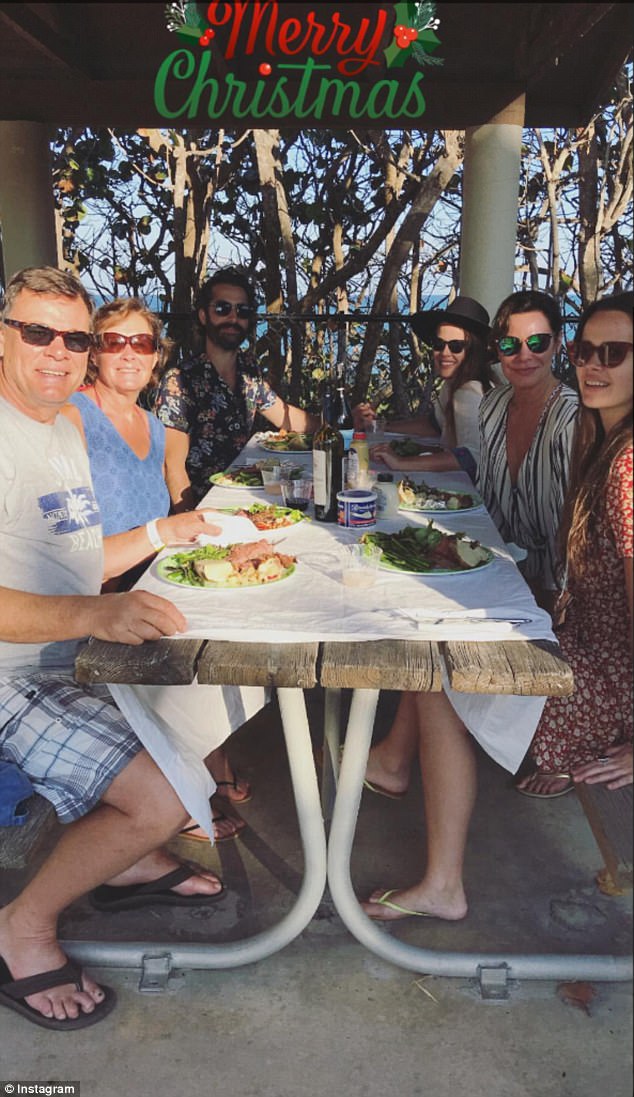 Chow down: Luann De Lesseps was seen enjoying a beachside BBQ on Christmas with her brother 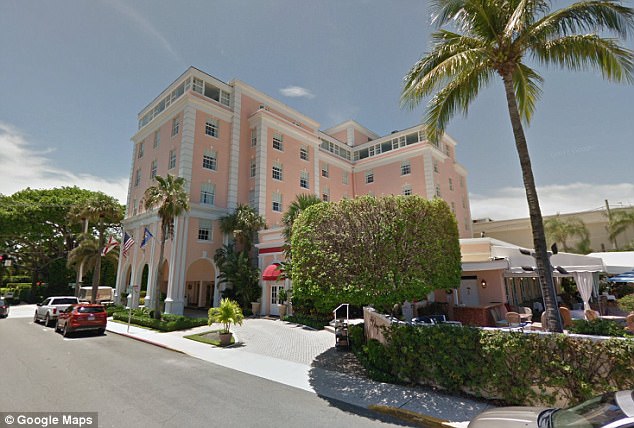 On the go: De Lesseps was arrested after reportedly breaking into a room at The Colony despite having one on the floor below 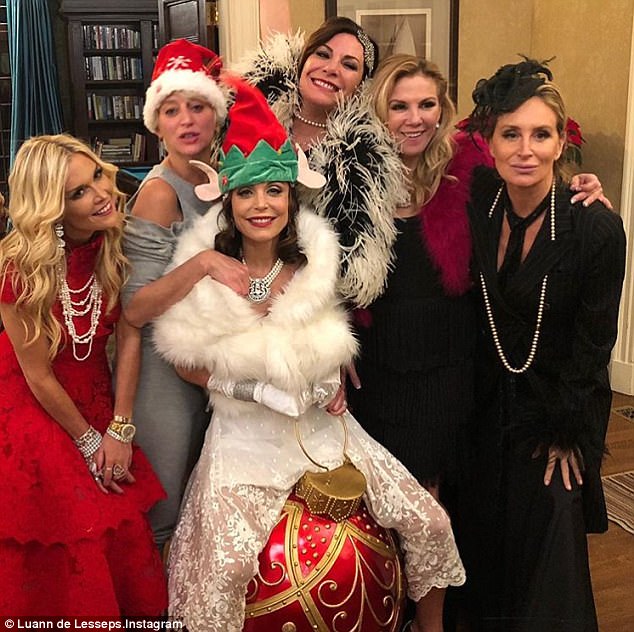 Gang’s all here: De Lesseps has been busy filming the upcoming season of Housewives (above with the cast last week)

One source claimed earlier this year that de Lesseps’ New Year’s Eve nuptials were less about true love and more about an aging divorcee desperate to secure her ever-loosening grip on reality stardom.

A close friend of D’Agostino told DailyMail.com that it was Tom who filed for divorce after growing tired of being cuckolded by his new wife during their brief marriage.

‘It has been really difficult for Tom because he did love her,’ said his friend.

‘But she only married him because she was becoming irrelevant on the show and needed a new story line.’

And as D’Agostino’s friend explained, that was still just one of the couple’s many problems.

‘She cheated, she was unfaithful, she was prone to violent outbursts,’ revealed the friend, making their way through a laundry list of accusations.

Those violent outbursts allegedly included de Lesseps biting D’Agostino days before their wedding and leaving him covered in blood when she scratched his cheek at a posh Upper East Side eatery in July.

‘It doesn’t take much for her to punch, bite, slap or scratch him,’ noted the friend, who described de Lesseps’ behavior as ‘bats*** crazy’ at times.

Another friend who knows both members of the couple tells DailyMail.com that it was clear from the beginning this romance was made for television.

‘Stevie Wonder can see what Luann did here,’ jokes the friend of the estranged pair.

‘She knew she’d had a very boring season, except for drunkenly falling into the bushes in Mexico, so she needed something to ensure Bravo cast her for another year.’

The friend then added that de Lesseps has been holding on to her position as one of the show’s leading ladies with an iron grip ever since she was demoted back in season six.

‘She was downgraded a few years back and it nearly killed her being a friend of the Housewives rather than a fully-fledged cast member,’ revealed the friend of the couple.

And while some may find the entire scenario to be a bit uncouth, the friend applauded Luann for her tenacity.

‘It’s a very smart move by the nurse from Connecticut. No one hustles better or is more cunning than Luann,’ said the friend.

It worked out too, as she is a featured cast member in the upcoming season.