LUCY MANGAN: Why every parent must urge their teenager to watch the TV series Sex Education

I’m not a prude. Well, I am, but only in the privacy of my own home. I’m very happy for others to do whatever they want with whoever, whenever they want, while I keep the bulk of my clothes on and my eyes averted.

But the TV series Sex Education is quite something – even if you’re not at least three parts an aged Catholic aunt.

The creation of playwright Laurie Nunn, it follows the mostly sexual escapades of a group of 16-year-olds at fictional Moordale High.

The main character, Otis, has absorbed so much knowledge about carnal matters from his sex therapist mother Jean (played by Gillian Anderson) that it’s put him off the practice itself.

The TV series Sex Education is quite something – even if you’re not at least three parts an aged Catholic aunt. Pictured: characters Otis and Ola

Cool loner Maeve swiftly spots a business opportunity here and turns Otis’s expertise into a money-making scheme, with him giving advice to fellow students in need of an education in real sex.

Unsurprisingly, the first series received much criticism and I suspect the new one (which, as a TV reviewer, I’ve seen in its entirety) will do likewise. Not least because it begins with a bravura sequence proving that Otis has finally overcome his mental block.

You ought to watch it. No matter how many parts aged aunt you are, this is an important programme. And you must urge your children (from low teens and up) to watch it, too. 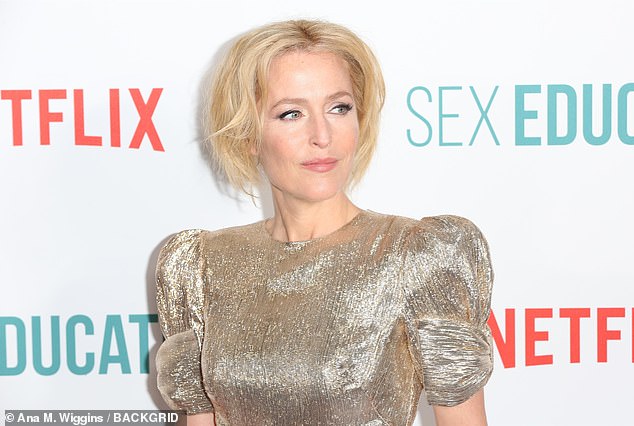 The main character, Otis, has absorbed so much knowledge about carnal matters from his sex therapist mother Jean (played by Gillian Anderson pictured) that it’s put him off the practice itself

Because – as well as being superbly written and hysterically funny – it has a vital message.

Although to the untrained eye it looks like something born of, and feeding straight back into, the soulless, pornified culture in which too many are steeped and which the internet generation sadly believe is normal, I strongly believe that it is a potent and necessary antidote to it.

Sure, it treats many and various sex acts for laughs. But it also handles the accompanying emotions with utmost respect. Its moral message centres on the crucial difference between sex and intimacy. Intimacy does not necessarily involve sex. Sex does not necessarily imply intimacy. And one is always better when both are involved. Yes, I realise this is an old-fashioned coupling of two notions that long ago became divorced from each other.

Indeed, the experience of a friend, whose job as a doctor had changed beyond all recognition, made this clear.

She retired recently, more willingly than she expected after a career teaching sexual health and wellbeing in schools. Her job involved explaining to young teenagers why boys should never bully/coerce/cajole (delete according to temperament of boy) girls into ‘doing things’ that they then record on phones and send the images to friends. 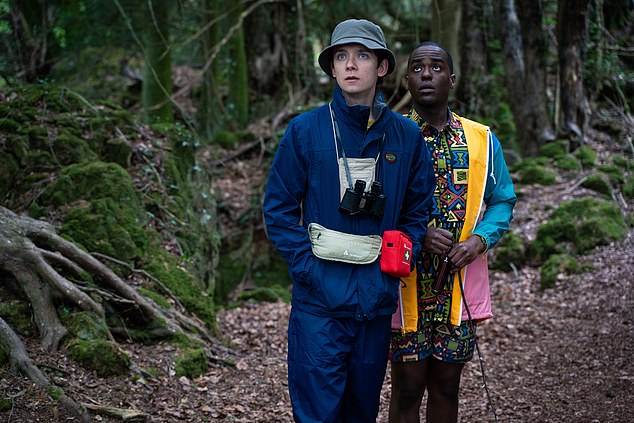 A second series of the drama launched on Friday on Netflix and it covers a huge amount of ground. Pictured: main characters Otis and Eric

Sex Education may be crude (the actors, for the avoidance of doubt, are all in their 20s, not teens) but its storylines show young viewers that sex should be enjoyed – by everyone involved.

Amid the jokes and physical disasters of the TV drama is the message that, speaking honestly, eliciting not just consent but enthusiasm for any sexual activity is a far better way – and will set you free to enjoy yourself far more.

Now that is an education.

Last week I learned that Lord Byron, the most billowy-sleeved of all the Romantics, nicknamed his rival poet Wordsworth ‘Turdsworth’. If I’d known this earlier, GCSE English would have been much more fun.

A quiet plea from us introverts

A variety of suggestions sprang to mind in response to a fad on the internet called Stupid Questions For Introverts.

My favourites: ‘Why are you so quiet?’ and ‘Do you want to meet up for the second day in a row?’

Contrary to what you might think, many of us introverts contributed. I suspect this was for two reasons.

First, throwing one sentence into an anonymous group of similar people and then retreating is the ideal form of interaction for most of us cautious-minded folk.

Second, it might help in our lifelong collective quest for understanding in a world built by and for our loud, excitable opposite numbers – the extroverts.

Meanwhile, for anyone baffled by a sibling, friend, colleague or child who’d prefer to crawl backwards over broken glass than go to a party, talk to a stranger or participate in a group activity, this is the clinical definition of an introvert: someone who is drained rather than energised by interacting with people.

If you have the good fortune to be an extrovert, please be kind and give us some space. We’ll come to you when we’re ready. April 2025, maybe.

The menace of TV’s plastic stars

Apparently, I’m not alone in boggling at the body shapes on show on ITV’s Love Island. I know we are the same species but, God, it’s hard to believe.

They look like models of extruded plastic – as unsettling as humanoid avatars.

No wonder programmes like this and similarly honed influencers on social media are blamed for encouraging the growing use of anabolic steroids by men.

For their part, women undergo cosmetic surgery, extreme dieting or have eating disorders.

If you need drugs or other extreme measures to improve yourself, you’re merely chasing an illusion. 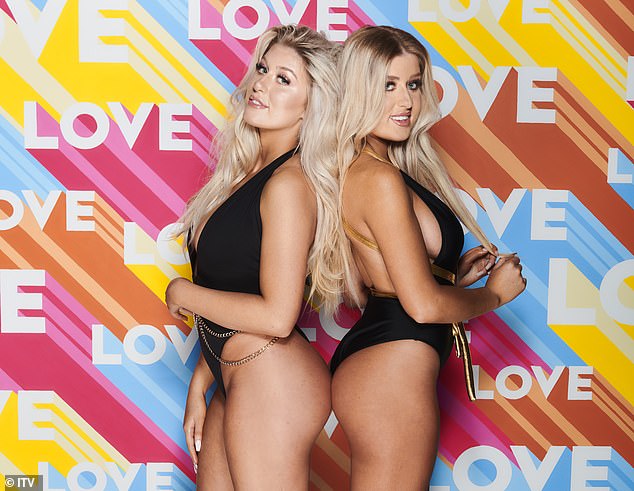 Apparently, I’m not alone in boggling at the body shapes on show on ITV’s Love Island. Pictured: Jess and Eve, twins on this year’s series

The Duke of Edinburgh Award Scheme has proposed a list of 25 so-called ‘character hacks’ which every teenager should have the chance to do before leaving school. The ideas – which include community work, befriending an older person, digitally detoxing and campaigning for something you believe in – is a noble one, aimed at improving psychological resilience.

I’d add two more: No 26 – ‘Never use the phrase ‘character hack.’ ‘ No 27 – ‘Take care of your knees, for it’s not strength of character that gets you up stairs.’ Any older person will tell you to start exercise squats now.

According to new research, we are at our unhappiest at the age of 47. I completely understand that – not old enough to have forgotten our youth entirely but old enough to see the decrepitude ahead.

Ding-dong-bing-bung! Boris has done it again.

He’s divided opinion by encouraging people to ‘bung a bob for a Big Ben Brexit bong’ – i.e. donate towards the £500,000 said to be needed to allow Big Ben to chime at 11pm on January 31 when we leave the EU. W

Whether you’re Leave or Remain, you must have hoped for better.

Just like his previous cheque to help the homeless, it’s an infinitesimal amount of his £80 billion fortune – 0.000006 per cent, in fact.

It’s like someone on an average UK income giving 20p. Bezos’s insulting message is: Koalas – save yourselves. 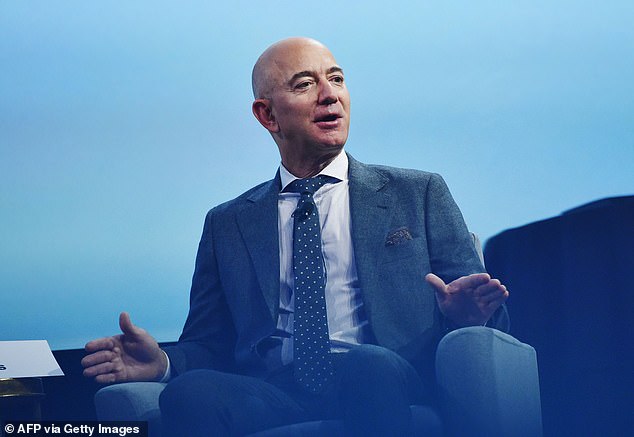 A men’s make-up counter has opened for the first time at John Lewis. Please – no real man should go there.

Don’t be suckered, like us women, into a lifetime of lotions, potions and powders. It’s also expensive and time-consuming, with occasional burning sensations. In any case, you’ll never master a cat’s eyeliner flick.

Women prefer bearded men when seeking someone to start a family with, a study suggests.

Somewhere in our reptile brains we find facial hair a sign of masculinity, it claims. In truth, beards often camouflage weak chins and don’t suggest the quality genes we’d wish to propagate.

Succumbing like all children eventually do, my son is consumed by Harry Potter. So, together, we used the Wizarding World website to discover our individual ‘patronus’ – or animal spirit. Mine is a hedgehog.

Now I feel fully justified to curl up in a ball and pretend to be hibernating every time my son demands attention.

Bestselling author Lee Child is handing over the writing of his Jack Reacher thriller series to his younger brother.

Fans – I’m a devoted one – are distraught. Yet we must be stoic, like his ex-US Army hero, who is epitomised by: ‘Reacher said nothing.’