And midfielder Gavi showed why Enrique had the faith to throw him into the side at 17 years and 62 days old.

Up against the likes of Marco Verratti and Jorginho, Gavi showed no signs of being overawed, producing a debut of rare confidence in the 2-1 win that set up a final against Belgium or France on Sunday.

Composed on the ball, confident throughout and always looking to bring Spain’s attacking players into the game, Gavi’s performance left his coach purring.

‘See how good the kids are in Spain! It is not normal to see a player with this character, this confidence on his debut,’ Luis Enrique told RAI Sport.

‘He will be the future of the Spain squad and I think the present too,

‘Verratti is his idol! I told him, today you press Verratti from the first moment to the last. He loved it.’ 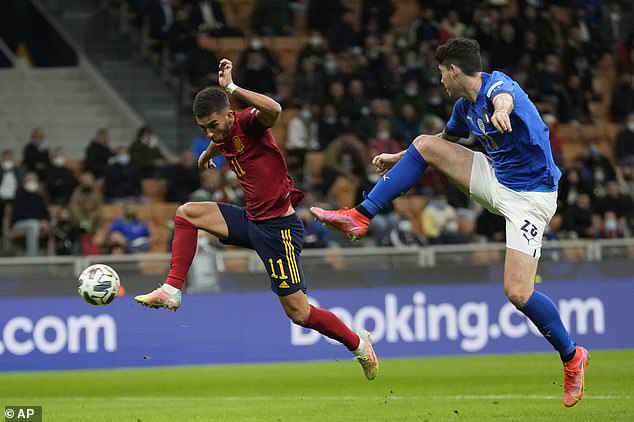 Enrique said the Spain press was key to the 2-1 victory on Wednesday night.

‘The key was perhaps that we are capable of playing the way we always do, that is the key to this game,’ Luis Enrique told RAI Sport.

‘Italy are so strong that they are always difficult opponents. I think it was one of the best matches of football that you can see at international level.

‘We were able to press very well, block off some of Italy’s qualities and in the end we created danger with players from the second lines. It was almost the perfect performance for us.’ 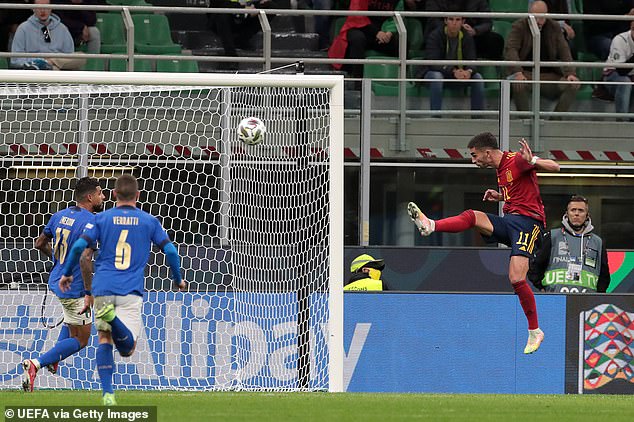 Enrique added: ‘The satisfaction is that we are in the final, not that we ended this run, because Italy deserved that world record and they continue to play football at a very high level.’

Ferran Torres expects to be available for Sunday’s Nations League final after firing Spain to victory over European champions Italy before limping off injured.

Manchester City forward Torres claimed a first-half brace in Milan as La Roja recorded a 2-1 semi-final win to set up a showdown with France or Belgium.

Success for Luis Enrique’s men at the San Siro partially avenged the Euro 2020 semi-final exit suffered at the hands of their hosts, while ending Italy’s world-record 37-match unbeaten run. 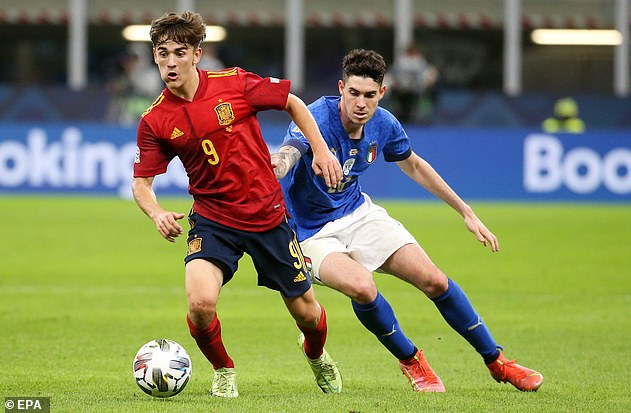 And the in-form 21-year-old – who now has 12 international goals in 21 outings following two assists from Mikel Oyarzabal – already has his sights set on helping his country lift silverware.

‘We knew it was a special match, we fell in the semi-finals of the European Championship and what better way to beat them at home in another semi-final,’ said Torres, according to Marca.

‘I am happy for the team. I believe that perseverance and training make the results arrive.

‘I had a few minor annoyances (with injury) but I’m already thinking about the final.’

Enrique added: ‘I’m not sure how Ferran will be.

‘He had a knock in the first half and another in the second half so we decided to take no risks.’