Perry’s fiancée Wendy Madison Bauer joined his 21-year-old son Jack and his mother,  the star’s ex-wife, Rachel ‘Minnie’ Sharp, at a restaurant near in Studio City, California, on Friday evening.

They were joined by a woman who appeared to be a friend of Perry’s 18-year-old daughter Sophie, though it is unclear if she herself attended the dinner.

The blended family likely took the opportunity to discuss funeral arrangements for Perry as it’s been rumored that he will be laid to rest at the Los Angeles Forest Lawn Cemetery. 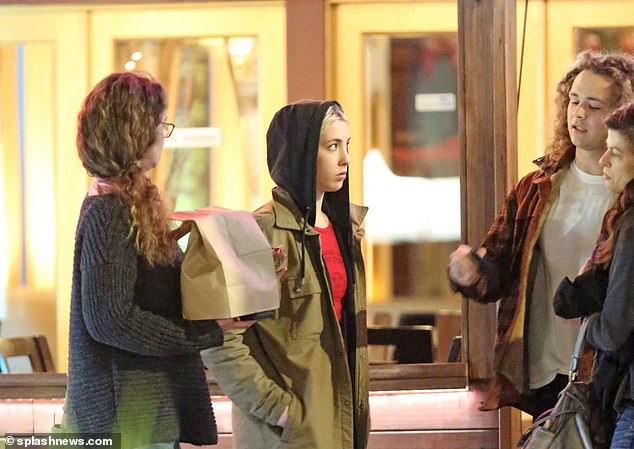 They were joined by a woman who appeared to be a friend  (center) of Perry’s 18-year-old daughter Sophie, though it is unclear if she herself attended the dinner 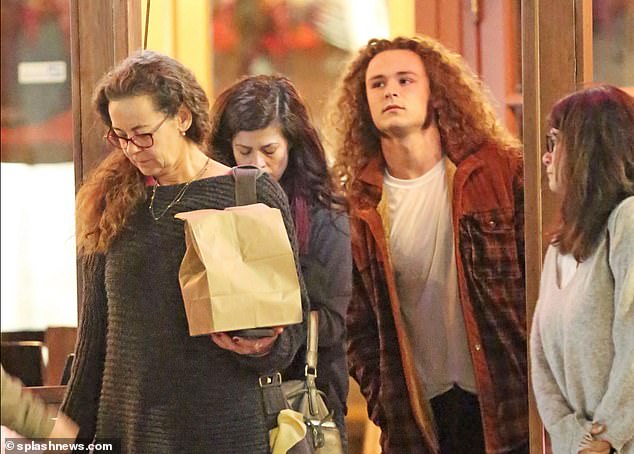 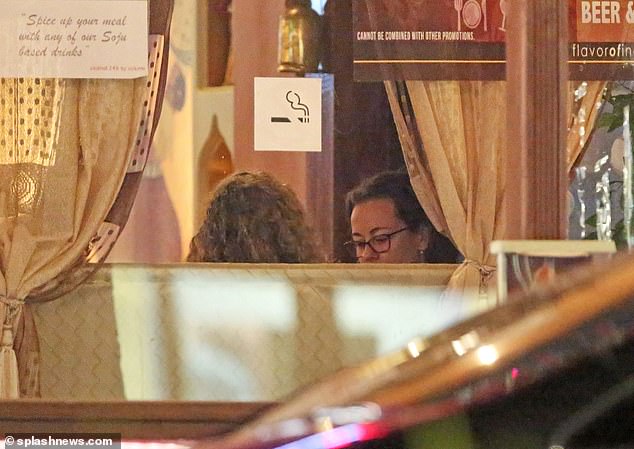 They likely took the opportunity to discuss funeral arrangements for Perry 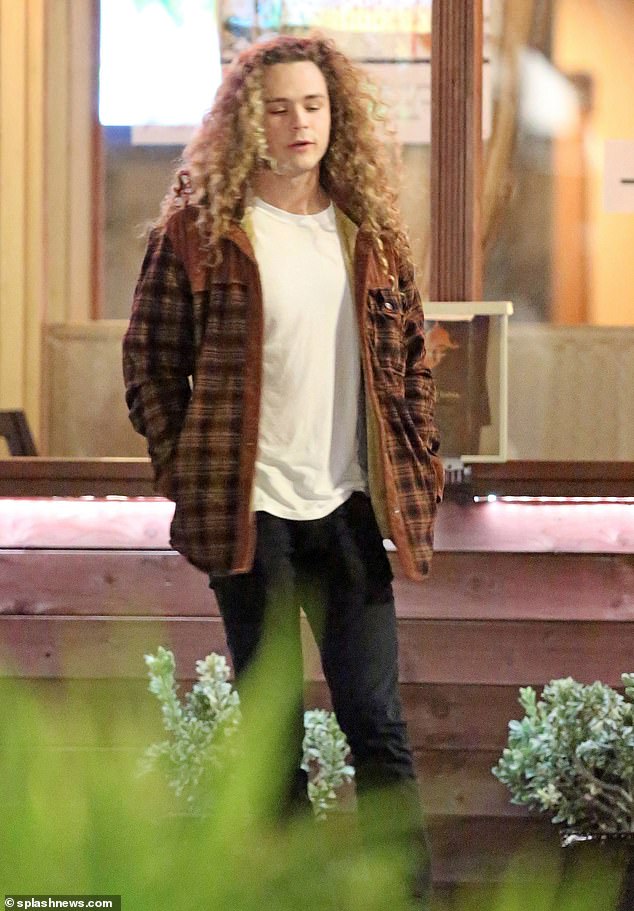 Jack Perry, a pro wrestler who is taking a break from the ring in the wake of his father’s death, was seen wearing a plaid shirt and black jeans with his hair in its signature long, curly ‘do 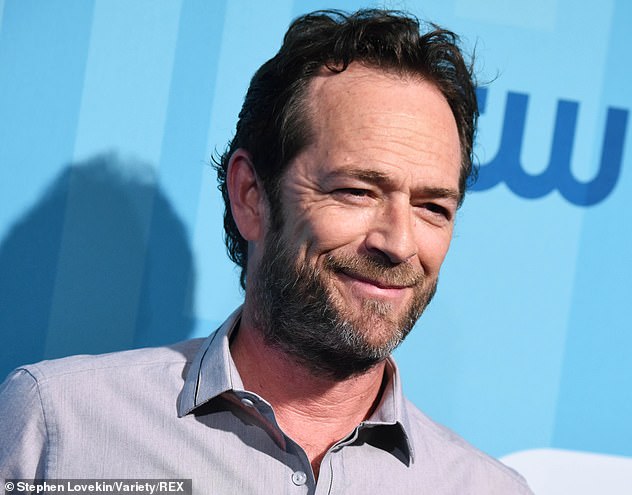 Perry died on March 4 after suffering a stroke the week prior. The same day he suffered the stroke, Fox announced a third reboot of 90210, the series that skyrocketed him to fame

Jack Perry, a pro wrestler who is taking a break from the ring in the wake of his father’s death, was seen wearing a plaid shirt and black jeans with his hair in its signature long, curly ‘do.

Bauer and Sharp, who appear to be good friends, both wore jeans and soft sweaters to the gathering near their former partner’s home.

The dinner came the night before Bauer broke her silence about losing the man she’d been secretly dating for nearly 12 years.

In a statement to People published Saturday, the 44-year-old said: ‘I want to express my gratitude to everyone for the outpouring of love and support.

‘The countless, heartwarming stories of Luke’s generosity and kindness have been a great source of solace during this difficult time.

‘The past 11½ years with Luke were the happiest years of my life, and I am grateful to have had that time with him.

‘I also want to thank his children, family, and friends for their love and support.

‘We have found comfort in one another and in the knowledge that our lives were touched by an extraordinary man. He will be dearly missed.’ 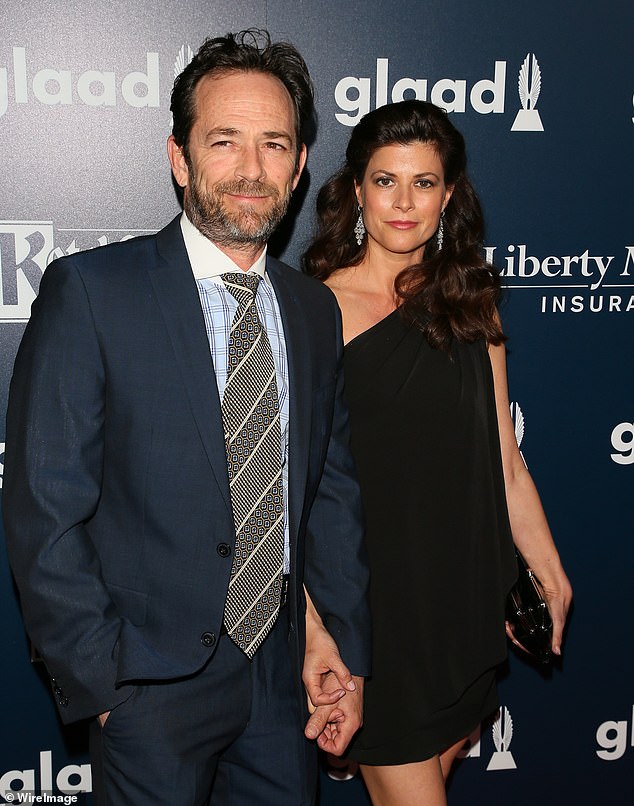 Bauer broke her silence after the beloved actor’s death in a statement on Saturday that said:  ‘The past 11½ years with Luke were the happiest years of my life, and I am grateful to have had that time with him.’ The pair are pictured during their first public appearance in 2017 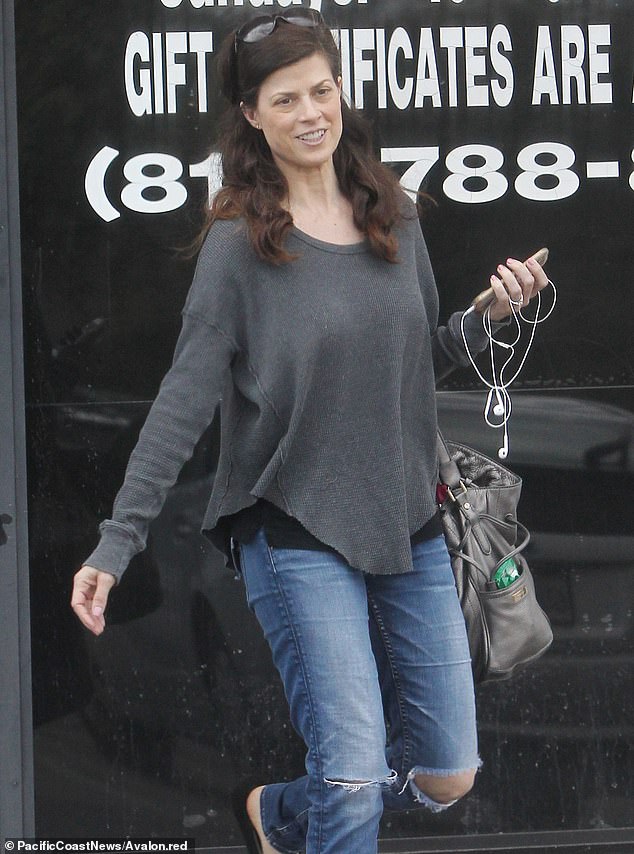 While specifics about their relationship are unknown, Perry hit the red carpet with Bauer at the GLAAD Media Awards in April 2017.

Bauer was spotted for the first time since Perry’s death on Friday in Los Angeles.

She was seen dressed in a dark gray sweater and blue jeans as she went with a friend to a nail and spa salon.

Later in the day at her home, a swimming pool maintenance worker arrived and gave her a comforting hug.

Bauer worked as a therapist but also acted and worked in the entertainment world for 12 years, according to her personal website.

She acted in small roles under the name Madison Bauer from 2004 to 2011, appearing in small roles on House and The Mentalist, according to her IMDB page.

She was at his side along with his children and ex-wife when he passed away last Monday. 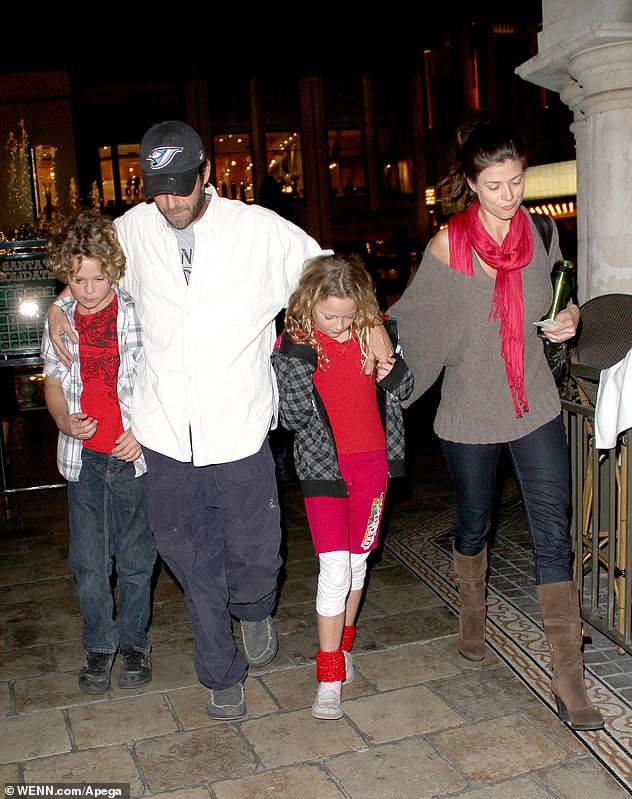 Perry is pictured above with son Jack, daughter Sophie and ex-wife Minnie Sharp in 2009

On February 27 Perry suffered a massive stroke in his Sherman Oaks, California home and was rushed to the hospital.

Though he at first exhibited signs of recuperating he passed away on Wednesday after his family decided to take him off life support.

He suffered the devastating stroke the very same day Fox announced it would be reviving 90210 for the third time.

Following his passing the actor’s publicist released a statement about his final hours.

‘The family appreciates the outpouring of support and prayers that have been extended to Luke from around the world, and respectfully request privacy in this time of great mourning. No further details will be released at this time,’ it added. 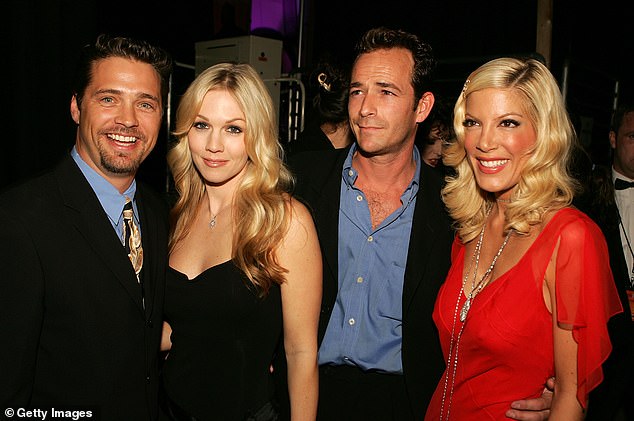 Luke Perry is best known for his leading role in the 90s teen drama Beverly Hills 90210. He is seen above with castmates Jason Priestley, Jennie Garth and Tori Spelling in 2005 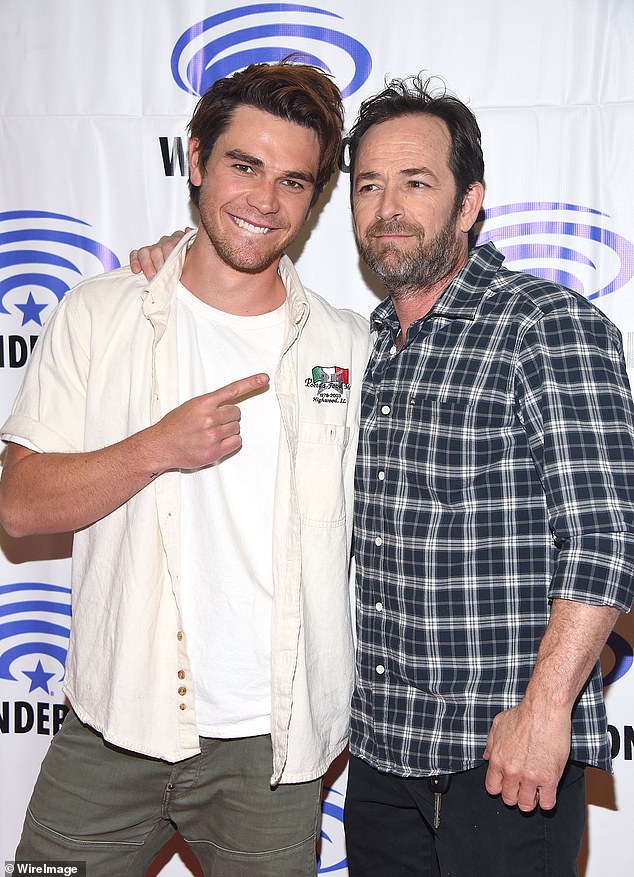 His latest role was as Fred Andrews on the CW series Riverdale. He is pictured with his son on the show, actor KJ Apa, in March 2017

Perry’s children paid tribute to their father in Instagram posts last week as the world mourned the loss of the famed Beverly Hills 90210 star.

‘He was a lot of things to a lot of people. To me, he was always Dad. He loved and supported me in everything, and inspired me to be the best that I could possibly be,’ said Jack Perry, a professional wrestler under the name ‘Jungle Boy’ Nate Coy.

‘I’ve learned so much from you, and my heart is broken thinking about everything you won’t be here for,’ he continued.

‘I’ll miss you every day that I walk this earth. I’ll do whatever I can to carry on your legacy and make you proud. I love you Dad,’ Perry’s son concluded. 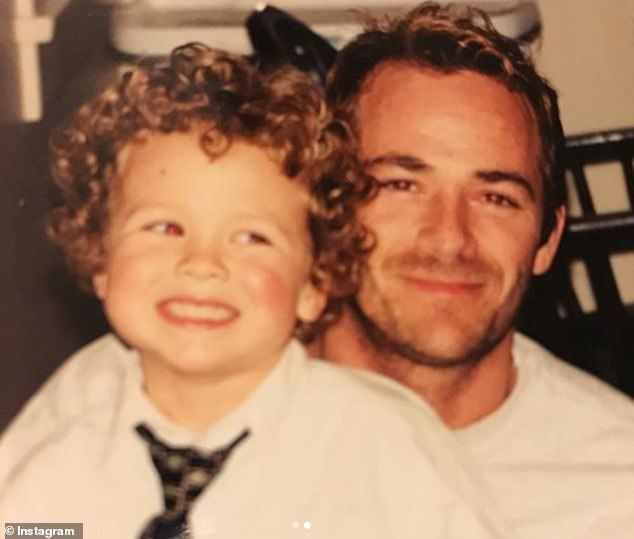 Luke Perry’s pro wrestler son Jack ‘Jungle Boy’ Perry paid tribute to his father with a throwback photo posted to Instagram on Wednesday, two days after the actor died at the age of 52 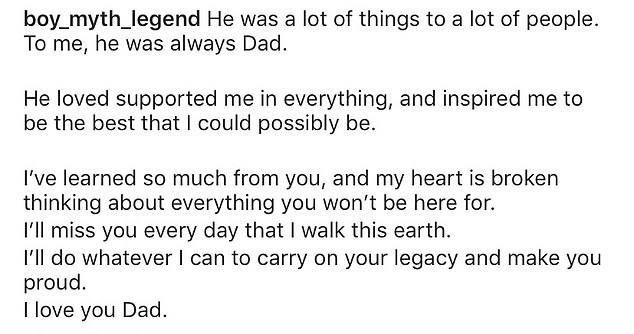 His daughter Sophie Perry also released a heartfelt statement following her father’s death, along with a photo of them together.

‘A lot has happened in this past week for me. Everything is happening so fast. I made it back from Malawi just in time to be here with my family, And in the past 24 hours I have received an overwhelming amount of love and support,’ she began.

‘I cannot individually respond to the hundreds of beautiful and heartfelt messages, but I see them, and appreciate you all for sending positivity to my family and I,’ she continued.

‘I’m not really sure what to say or do in this situation, it’s something you aren’t ever given a lesson on how to handle, especially when it’s all happening in the public eye. So bear with me and know that I am grateful for all the love. Just, being grateful quietly,’ she concluded.’ 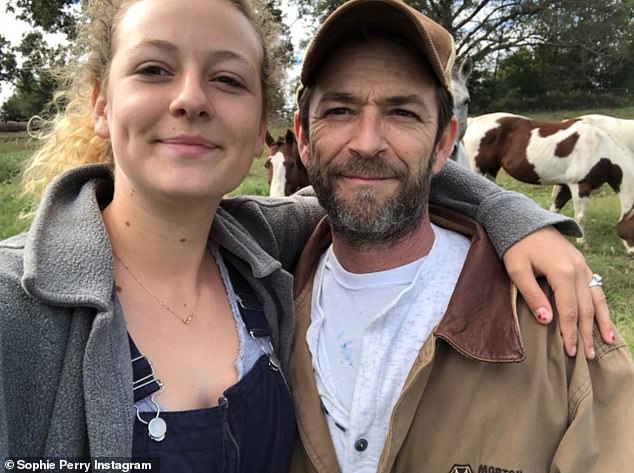 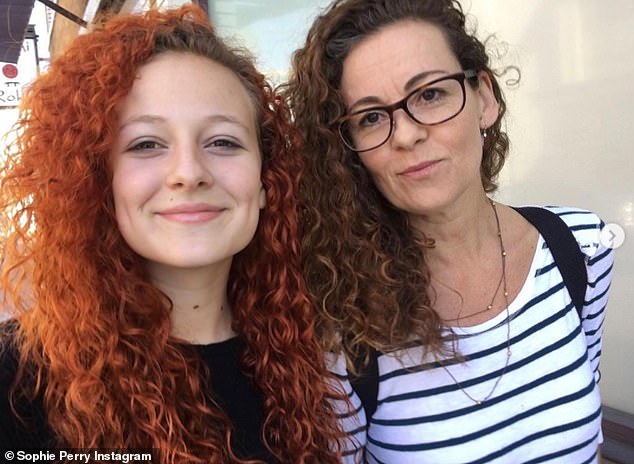