Lunar Eclipse 2018: Everything you need to know about this week’s blood moon

The longest total lunar eclipse of the 21st century is heading our way this week and will turn our moon into a reddish orange colour, transforming it into what is referred to as a blood moon for over 100 minutes, according to NASA.

While it is not a solar eclipse, the appearance of the blood moon is a rare celestial event and will only be visible from certain areas in the world such as the Middle East, south or eastern Africa, western and southeast Asia and India, but not from North America.

Those in Australia will be able to view the lunar eclipse as it sets and those in eastern Brazil and western Europe, while it rises. Here’s everything you need to know about the July 2018 eclipse, where you can watch, whether it will result in the end of the world and when the next eclipse is.

What is a lunar eclipse?

As reported in Forbes, both lunar eclipses and solar eclipses are viewed as a ‘general darkening of either the moon or sun’ when the sun, Earth and the moon are aligned in a straight line.

During a lunar eclipse, the sun shines on the Earth, but the moon creeps behind the Earth to be in its shadow.

What this results in is a lack of direct sunlight reaching the moon and in turn, bouncing off it to the Earth, which is how our night skies are usually lit up.

How often does a blood moon occur?

While lunar eclipses are not so frequent, a blood moon occurs around twice every three years, as reported in the Daily Star. NASA said: ‘In any one calendar year, the maximum number eclipses is four solar and three lunar.’

A lunar eclipse becomes a blood moon when the moon becomes a deep red colour, because of what is referred to as sunlight scattering, according to Forbes.

‘Since during an eclipse there is no direct sunlight hitting the moon, all of the light which reaches the moon and bounces back to Earth (allowing us to see the moon) is indirect.

‘The indirect light goes through Rayleigh scattering as it passes through Earth’s atmosphere. This, in effect, scatters the longer blue and violet wavelengths more than the shorter red and orange wavelengths.

‘Hence, more red/orange wavelength reaches the moon and is bounced back to Earth, presenting to us a deep red blood moon.’ 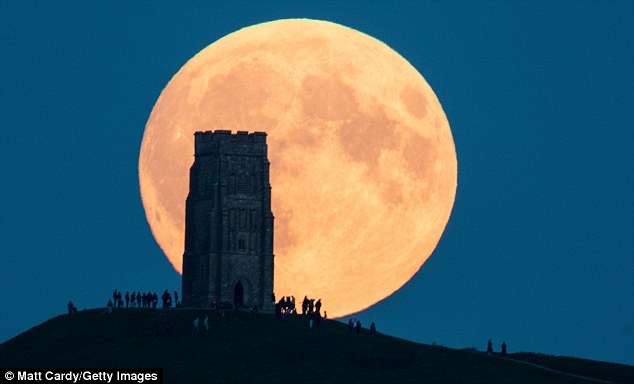 A picture of the September supermoon rising behind Glastonbury Tor in Somerset, England

On Friday, July 27 2018, the longest total lunar eclipse of the century will be seen and will also transform the moon into a reddish orange colour for over 100 minutes, for about an hour and 42 minutes.

However, the entire event, which will start as the moon passes through the Earth’s atmosphere, will last about six hours and 13 minutes, according to Noah Petro, a scientist for the NASA Goddard Space Flight Center as reported on ABC News.

On Friday, the sun, Earth and moon will be aligned in a straight line at the same time as a full moon. Another unique feature about this celestial event is that the Earth is close to the farthest that it will ever be from the Sun. This is referred to as the Aphelion, which occured on July 6, according to timeanddate.com.

Also, the reason why this lunar eclipse is the longest of the 21st century is because it will pass through the centre of the Earth’s shadow which will in turn, increase the time in which the moon is blocked from the sun.

While the theoretical limit of a lunar eclipse is 1 hour and 47 minutes, it will be just under 1 hour and 43 minutes.

Where can I watch the lunar eclipse? 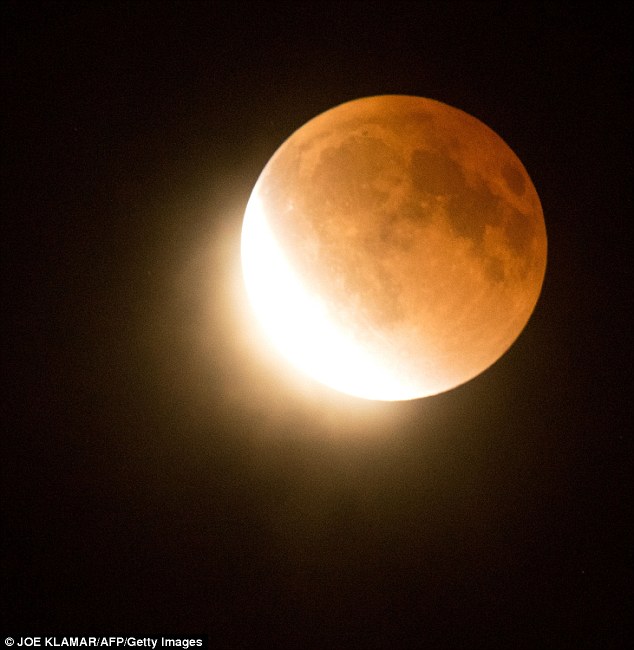 The partial eclipse will begin at 18:24 UTC (Universal Time), the total eclipse at 19:30 UTC and the greatest eclipse will at 20:22 UTC. You can find the exact time in your time zone by entering your location here.

Do you need special glasses to look at the moon?

While protective eyewear was recommended during the recent solar eclipse to protect people’s eyes from the sun’s bright light, i News reported that during a lunar eclipse, the glow from the moon is not nearly as strong so it is safe to look at the spectacle without any additional protection.

The next total lunar eclipse visible will be on January 21, 2019, according to NASA. It will be a super moon, which is a full moon or new moon that coincides with the moon’s position at its closest to the Earth.