From Jermain Defoe’s Wembley Arch to David Beckham’s cornrows, footballers have been known for sporting some seriously dubious ‘dos’.

But Goran Pandev, who plays for Italian side Genoa, may have one of the most unfortunate hairstyles of all time – and didn’t even get it on purpose.

Eagle-eyed fans noticed that a bald patch on top of the striker’s head looks remarkably like a set of male genitals as he was substituted off during a game against Udinese on Sunday.

Goran Pandev, a striker for Italian side Genoa, has been mocked online after fans noticed a bald patch in the top of his head forms a rather rude shape 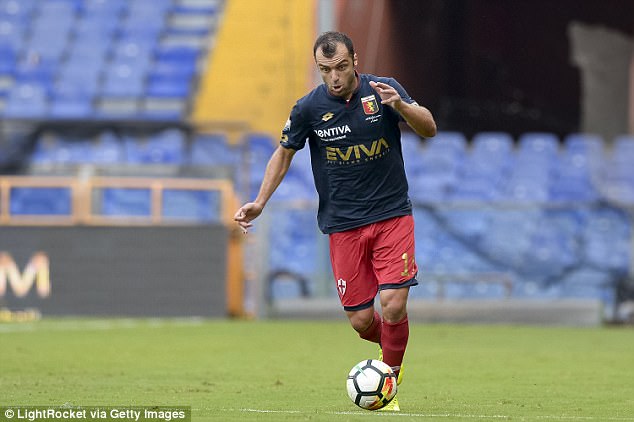 The unfortunate ‘do’ was spotted on Sunday night as Pandev, who also captains the Macedonian national side, was substituted off against Udinese

While the Macedonia captain’s hair has been thinning for a while, this was the first time the patches had joined up to make such an unfortunate shape.

As could be expected, fans on Twitter wasted no time in poking fun at Pandev.

‘He literally went for the d*ckhead cut,’ one person joked.

Others offered him up as an early nomination for ‘haircut of the season’, while dozens of aubergine emojis were also banded around.

Twitter users were quick to mock Pandev – accusing him of being a ‘literal d*ckhead’, advising him to shave his remaining locks, and bandying around aubergine emojis

A few fans sympathised with the striker, with one suggesting he needs to ‘do a Rooney’ as quickly as possible – in reference to the star’s famous transplant.

Meanwhile some suggested that he needs to accept baldness and shave his head immediately to avoid further mockery.

While there have been too many terrible football haircuts through the years to mention them all, who could forget Ronaldo’s half-dome, the time Salomon Kalou shaved an insect into the back of his head, and Carlos Valderrama’s blonde afro.