A machete-wielding thug  who posted a bloody selfie on Snapchat moments after he almost cut a man’s hand off outside a McDonald’s has been jailed for 12 years.

Jordan Hughes’ victim needed 12 hours of surgery to reattach his hand after Hughes began following him and his friends from a McDonald’s restaurant after a night out in Warrington in March.

Liverpool Crown Court heard how Hughes, 22, offered no explanation for the attack on March 7 – and even callously posted a bloodied picture on Snapchat afterwards.

Hughes had hidden the blade down his trousers during a night out in Warrington, Cheshire, the court heard.

Jordan Hughes gave no reason for the savage attack outside a McDonald’s in Warrington in March, which nearly cost his victim his hand

Katy Appleton, prosecuting, said the victim, 20-year-old Samuel Liggett, along with three of his friends, were in the McDonald’s restaurant when Hughes was seen staring at them. 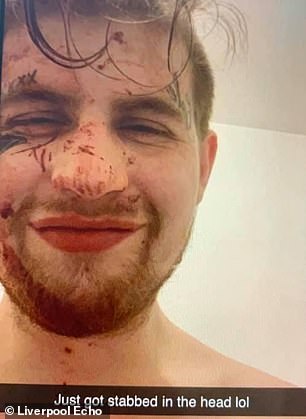 Moments after the horrific attack, Hughes posted a bloodied selfie on Snapchat

The two parties left the restaurant separately shortly after 3am, when Hughes started shouting at the group ‘for no apparent reason’ before making his way across the road and removing a 40cm bladed weapon from his trousers.

The victim described the attack as a ‘blur’, first thinking the weapon was an umbrella, before putting his arm up to protect himself.

Witnesses described Hughes taking two or three swings with the machete, which struck the victim’s hand and left it partially amputated at the wrist.

The victim was rushed to Whiston Hospital and needed extensive, complex surgery to his hand, which still does not have full function.

He has to wear a splint to try and straighten his wrist and prevent clawing and is in constant pain, the court heard.

Mr Liggett described living in ‘psychological torture’ as a result of his injury.

The court heard that just hours after the attack, cops were called to a large group of males fighting near Hughes’ home address in Warrington.

He originally told officers that he had fallen over the previous night and cut his knee which had been bleeding.

The court heard that Hughes was ultimately identified by his ‘top-knot’ hair style and diamond face tattoo.

It was also told that a Snapchat story was posted from Hughes’ account with a photograph of himself covered in blood and the caption ‘just got stabbed in the head lol’ the day after the incident.

Jeremy Rawson, representing Hughes said he is a shy person who will struggle in jail.

He added: ‘He is an unremarkable young man who has done something really out of character.

‘He is sorry for what has happened and wishes he could turn the clock back.’

Judge Gary Woodhall, sentencing, said: ‘For no apparent or discerning reason, you began shouting at that group who were just minding their own businesses.’

He added that the weapon had never been recovered, which indicated that Hughes was fully aware of what he had done and disposed of the evidence.

Judge Woodhall added: ‘Rather than regretting or having remorse for what you had done, you were revelling in what happened.’

The judge added that due to Hughes’ lack of motive and the high level of violence used, he could pose risk to the public.

He sentenced him to 12 years with an extended licence period of three years.

Hughes was also made subject to a restraining order.