Baking soda can cure breast cancer and deodorants and underwire bras can cause the disease – these are some of a number of myths about the disease circulating online.

Other false theories include cancer sufferers shouldn’t eat sugar and a mammogram can cause malignant tumours to spread.

The growth of inaccurate and often dangerous ideas on the internet has prompted Macmillan Cancer Support to reveal ten of the most common inaccurate beliefs about cancer and the real scientific truth behind them.

Such is the size of the problem, the charity has newly appointed its first ‘digital nurse’ dedicated entirely to combating ‘fake news’.

It comes after research by the charity raised fears that cancer patients are increasingly left to google their diagnosis without adequate support.

Ellen McPake, Macmillan’s new digital nurse specialist, said: ‘I’m there to make sure people affected by cancer have a real person they can turn to online for information about their symptoms, cancer diagnosis and treatment.’

These are some of the inaccurate views that crop up in internet searches and forums. 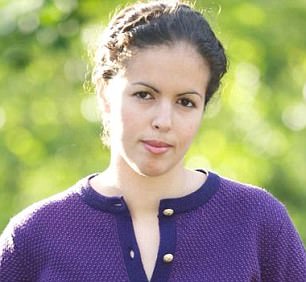 This theory claims that because cancer cells thrive in an acidic environment, alkaline substances like baking soda will prevent cancerous tumours from growing.

Unfortunately, baking soda nor an alkaline diet will not prevent or cure cancer.

This myth had deadly consequences when British army officer Naima Houder-Mohammed was convinced it could save her after she was diagnosed with breast cancer.

She paid thousands of dollars for ‘alkaline treatments’ for breast cancer, which consisted mainly of intravenous infusions of baking soda.  After three months she died at the age of 27.

Last year, the doctor in charge of her ‘treatment’, Robert O Young, was convicted of two charges of practising medicine without a license, and now faces up to three years in prison.

WHAT THE FAKE NEWS NURSE WILL DO

Ellen McPake will be dedicated to answering questions from people affected by cancer online, on Macmillan’s social platforms and online community.

She will be there to answer questions from people across the UK about cancer who want to investigate the validity of something they have read online.

This may relate to information about their symptoms, cancer diagnosis and treatment.

Ellen will be reacting to posts on social media such as Facebook to make sure people are being informed correctly.

She will also help run a series of monthly Q&A sessions on Macmillan’s Online Community on the charity’s website.

Her appointment comes as Macmillan research, conducted by YouGov, found 37 per cent of people in Scotland with cancer looked up information about their diagnosis online.

An estimated 3,450 people, or 4 per cent of Scottish cancer patients, who looked online for information thought they were going to die.

2. Antiperspirants and deodorants cause cancer

Some scientists have claimed that aluminum-based compounds in antiperspirants can trigger the development of tumours.

They have argued these compounds can build up in breast tissue and produce some oestrogen-like effects, which promote the growth of cancer.

But previous studies have denied there is any link – and manufacturers insist products are entirely safe.

But it isn’t clear that much aluminum is absorbed through the skin. Macmillan Cancer Support’s stance is that there’s no substantial evidence to suggest aluminium can contribute to a greater risk of breast cancer.

A review of the peer-reviewed literature on the issue in 2014 by a team from Risk Sciences International in Ottawa, Canada, concluded there was no clear evidence.

3. Eating ‘superfoods’ will stop you getting cancer

Green tea, maca, acai, blueberries – every week scientists find certain foods or nutrients that are supposed to increase or decrease the risk of cancer.

The definition of ‘superfood’ means it only has to be considered to be beneficial for health and well-being – which means almost any healthy food could be described as a ‘superfood’. 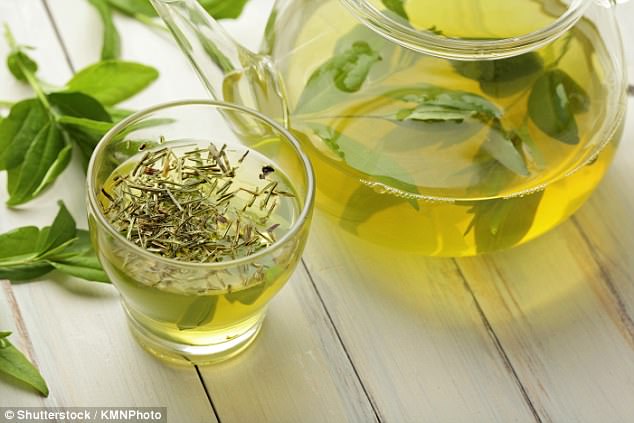 The charity said no one ‘superfood’ has been proven to reduce cancer risks – and people should focus on eating a healthy, balanced diet and getting exercise (stock photo)

‘Cancer and the human body are both too complicated for any one food, on its own, to have a major influence over whether or not you get cancer,’ said McPake.

‘Eating a healthy, balanced diet, exercising, and avoiding smoking have much more scientific basis in reducing your risk of cancer.’

4. You can think yourself positive into remission

A plethora of self-help books have emerged telling patients that they stand a better chance of beating cancer if they adopt a positive attitude.

But Ellen says a range of factors determine a person’s prognosis, such as what type of cancer they have, how much it has spread, and how quickly it is growing.

She says that while some cancer patients say having a positive attitude helps them when coping with cancer, it is not helpful to imply that someone’s prognosis is dependent on this.

‘A positive attitude can mean different things to different people and there should be no pressure on anyone to feel or act in a certain way,’ she said.

‘Cancer and its treatment can be a very scary experience. People can feel overwhelmed, helpless and too tired to be positive all the time but this doesn’t mean they can’t survive their disease.

‘If you are feeling anxious and depressed while going through cancer, it’s important that you talk to your doctor, nurse or someone close to you about your feelings.

‘There is also an army of people within the cancer community, including Macmillan who can help with emotional support.’

While it is true that smoking is around 80-90 per cent of lung cancers, it is not the only reason people get the disease.

Other causes include breathing in other people’s smoke (passive smoking), exposure to asbestos or a family history of cancer.

There are usually no signs or symptoms in the early stages, but many people eventually experience a persistent cough and breathlessness, coughing up blood, tiredness, weight loss and an ache or pain when breathing or coughing. 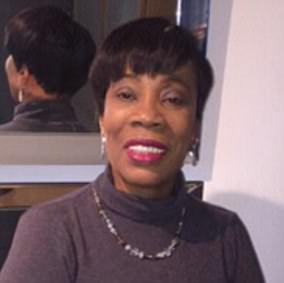 Yvonne Welch has never smoked yet was diagnosed with lung cancer

Mother-of-two, Yvonne Welch, from London knows that only too well that not only smokers get lung cancer.

A non-smoker, she was in her 40s when she was diagnosed with the disease.

She said: ‘I feared other cancers and checked my breasts regularly but never thought I would get lung cancer. After all, I didn’t smoke and led a healthy lifestyle.

‘I wished I had been more aware of the early symptoms of lung cancer as if caught early enough there is a better chance of recovering from it.

‘I’m still undergoing treatment but having lung cancer has put my life into perspective and I make the most of every precious moment with my family.’ 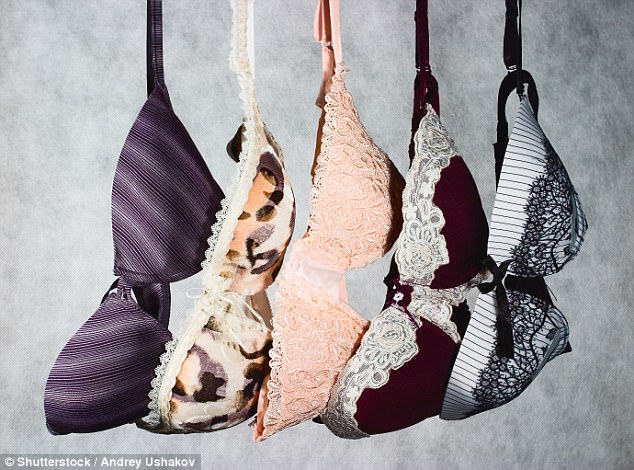 The myth has possibly continued to circulate because obesity does increase breast cancer risk, and women who are overweight are more likely to have larger breasts and wear a bra.

Women who don’t wear bras are more likely to be at a healthy weight.

Cancer is caused when damaged cells multiply out of control. Lifestyle factors such as smoking, drinking alcohol and not getting enough exercise can damage cells and increase people’s risk of getting cancer.

Women would be best focusing on these factors to reduce their chances.

SYMPTOMS OF BREAST CANCER IN MEN

Signs of breast cancer in men include:

A lump in the breast – this is usually hard, painless and doesn’t move around within the breast

Fluid oozing from the nipple (nipple discharge), which may be streaked with blood

The nipple or surrounding skin becoming hard, red or swollen

Breast cancer is often thought of as something that only affects women. But, while it is rare, men can get it too – accounting for just under 1 per cent of all cases.

That’s around 390 males in the UK each year.

It develops in the small amount of breast tissue men have behind their nipples. While it usually occurs in men over 60, it can occasionally affect younger men.

The exact cause of breast cancer in men isn’t fully understood, but those who have had female relatives with breast cancer are known to be at increased risk.

It is also linked to high oestrogen levels, which can occur in men who are obese, have chronic liver conditions, such as cirrhosis, and some genetic conditions.

Previous radiotherapy to the chest area also raises the chances.

The message is clear: Men should check their breasts as well as women and look out for the symptoms, especially if they are at higher risk.

Some studies have indicated a link between various psychological stress and an increased risk of developing cancer, but others have not. There is no conclusive evidence.

However, when we are feeling stress, this can impact on our well-being and we may lifestyle behaviours can change. For example, overeating or drinking more alcohol, which are associated with raised cancer risk.

Making positive lifestyle choices – such as limiting alcohol intake, not smoking, eating a healthy diet, and keeping physically active – can all help a person to reduce their risk of getting cancer and improve their overall health.

9. Mammograms give you cancer

Modern machines use radiation doses to get breast x-rays that are high in image quality.

However, the dose is very low, though, and for most women the benefits of regular mammograms outweigh the risks posed by this amount of radiation. They cannot cause cancer or cause existing cancer cells to spread. 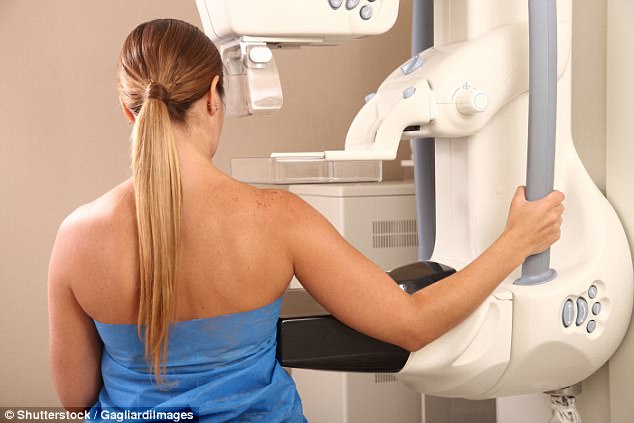 Mammograms are the best way to get an early diagnosis of breast cancer. You’re less likely to need a mastectomy or chemotherapy if breast cancer is detected at an early stage. 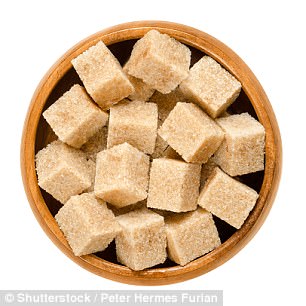 Cancer cells can grow at a fast rate, multiplying quickly. This takes a lot of energy, which means the cells need plenty of glucose.

But as with all other cells, cancer cells don’t just need sugar – they need nutrients such as amino acids and fats too.

Ellen said: ‘The myth says that because cancer cells need sugar to grow, people with cancer should cut out sugar.

‘Sadly, it’s just not that simple. All our cells – healthy ones too – need glucose, and our bodies can’t choose which cells get it.

‘There’s no evidence that following a ‘sugar-free’ diet lowers the risk of getting cancer, or boosts the chances of surviving if you are diagnosed.’