President Emmanuel Macron sparked fury in France by suggesting the country’s workers are lazy as he condemned ‘slackers’ for opposing his employment reforms.

Protesters staging mass walkouts will take to the streets across France on Tuesday in the first major challenge to Macron’s promised labour reforms – the biggest and riskiest of his fledgling presidency.

The French leader added fuel to the fire with a lively speech in Athens on Friday in which he said he would not ‘yield to slackers’.

Critics claim the former investment banker’s comments were ‘scandalous’, suggesting he was out of touch with the population.

French president Emmanuel Macron (right) delivers a speech next to his wife Brigitte Macron (L) during a welcoming ceremony at the presidential palace in Athens, on September 7, 2017, as part of his two-day official visit to Greece. In it, he warned that he would ‘not yield anything, either to the lazy, the cynics or the extremes’

The pro-business Macron is determined to make good on campaign promises to deepen the labour reforms – the unions have dubbed his draft legislation the ‘XXL’ version of the labour law – as a key to tackling France’s stubborn unemployment rate.

On Friday, Macron, a former investment banker, warned that he would ‘not yield anything, either to the lazy, the cynics or the extremes.’

Speaking during a visit to Athens, he lamented that France ‘is not open to reforms… We rebel, we resist, we circumvent. This is what we are like.’

Currently at 9.5 percent, joblessness in France is roughly twice that of Britain or Germany.

On the campaign trail, Macron pledged to overhaul regulations and reduce the weight of the French state to free up business activity.

Under his plan, bosses would be given more latitude to negotiate working conditions directly with their employees rather than being required to honour industry-wide agreements.

There would also be a ceiling for compensation for unfair dismissal.

Left-leaning politicians such as failed Socialist presidential candidate Benoit Hamon and the head of the radical left France Unbowed party, Jean-Luc Melenchon, both back Tuesday’s action.

Hamon on Sunday lambasted Macron for his ‘insulting’ remarks in Athens, which he said were ‘unworthy’ of a head of state.

‘Lazy people are the independently wealthy, who don’t need to work for a living,’ he told reporters.

‘And a lot of independently wealthy picked Emmanuel Macron as their champion.’

He said: ‘Who was the president talking about when he said he wouldn’t yield anything to the lazy?

‘The millions of unemployed and those without stable jobs?’ 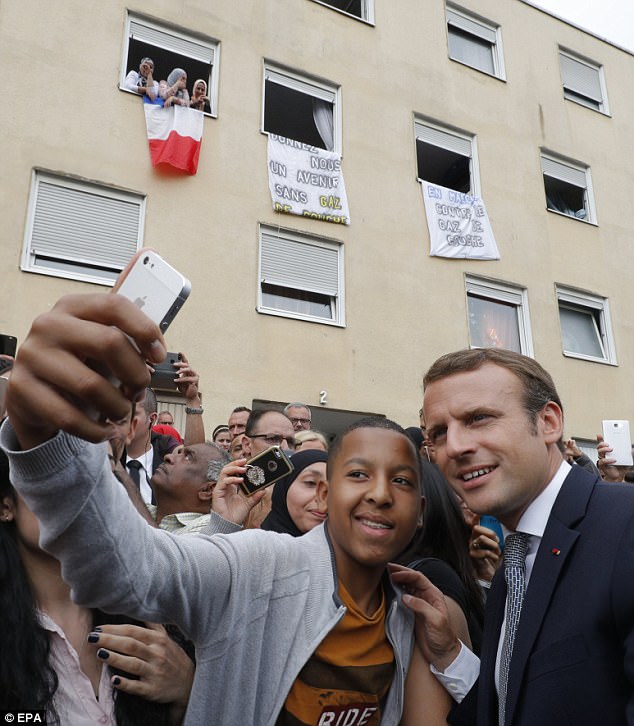 French President Emmanuel Macron (right) poses for photos with students as he leaves a school in Forbach, Eastern France on September 4, following a visit on the first day of the new French academic year

The CGT union plans to follow up Tuesday’s actions with another protest day on September 21, to be followed by another two days later, called by Melenchon.

The protests come as Macron’s approval ratings have fallen sharply.

Recent polls showed that only around 40 percent of French voters are satisfied with his performance in office, with analysts attributing the disaffection to a mix of communication problems and political missteps.

‘The feeling that the labour reform is unfair is beginning to take hold, which is not a good sign’ for Macron, said pollster Frederic Dabi of Ifop.

Macron has to show strength and ‘not give in at the start of his term, so as not to give a bad signal to voters,’ Dabi said.

But discontent over the labour reforms could morph into more general dissatisfaction with Macron, he warned. 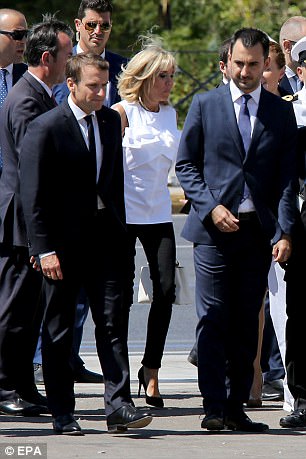 French President Emmanuel Macron (left) and his wife Brigitte (centre), arrives lays at the Tomb of the Unknown Soldier in Syntagma square in Athens, Greece

The day of protest tomorrow will gauge the ability of unions to mobilise after deep divisions have emerged between those determined to fight the reforms and those willing to compromise.

The CGT union, one of France’s biggest, has asked civil servants, rail and transport workers as well as students to observe the strike.

The centrist Macron, 39, is hoping to avoid a repeat of the months-long, sometimes violent protests unleashed by labour reforms pushed through last year by his Socialist predecessor Francois Hollande.

Macron’s decision to use executive orders to fast-track the labour reforms has angered all the unions, including those that are not striking on Tuesday and are adopting instead a wait-and-see attitude.

The orders must be ratified by parliament but are expected to breeze through given the large majority won by the president’s Republic on the Move party in June.

Eric Beynel, spokesman of the progressive Solidaires union, said workers would keep up the pressure ‘until the orders are withdrawn’.

The Force Ouvriere (FO) union, which had been shoulder-to-shoulder with the CGT last year, would prefer to keep its powder dry for battles down the road, specifically a proposed reform to unemployment insurance.

Nevertheless several FO sections and activists from other unions plan to defy orders and down tools anyway on Tuesday.