A Brothel madam whose punters received everything from a naked massage to a ‘Brucie bonus’ faces jail after being convicted of running a vice den.

Chin Chih Chang insisted she was a professional masseuse and had ‘no idea’ the scantily clad young Asians she employed were selling sex to her clients in a luxury harbour apartment block.

Jurors and lawyers frequently laughed as a series of punters gave evidence during a five-day trial.

Brothel madam Chin Chih Chang, above, has been convicted of running a vice den at Lord Gambier Wharf, Kirkcaldy, in Scotland 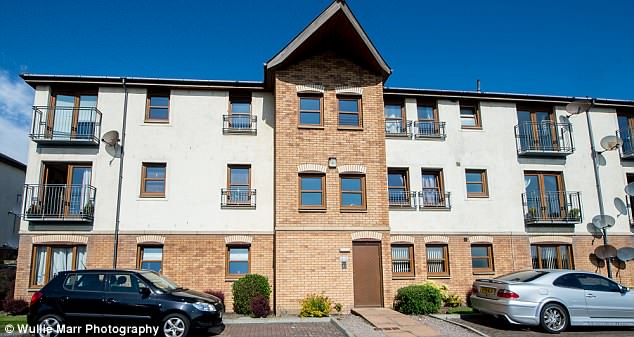 Police raided the ground floor flat on May 31 last year. The court was told that Chang was selling sex through ads on Gumtree to punters, who paid between £80-£110 a time for sessions

PC Kevin Daglish told Kirkcaldy Sheriff Court how, during a raid, he entered a room at the flat, which had initially been blocked by Chang, and found witness Alasdair McIntosh with his ‘buttocks in the air’.

‘I observed his buttocks in the air and underneath him was a female with her legs wrapped around him.

‘I told him to get off and get up. He rolled off the female and has stood up.

‘I would have expected him to have tried to cover up but he just stood there with a grin on his face as if he wasn’t bothered about the scenario.

‘I had to tell him to go and get dressed. He walked with no shame, arrogantly. He was quite cocky.’

Mr McIntosh had earlier told the trial he had responded to an advert and gone to the flat for a massage on his ‘sore back’ – but had received an ‘unexpected Brucie bonus’ from a scantily clad woman, for a ‘happy ending’ after his back rub. 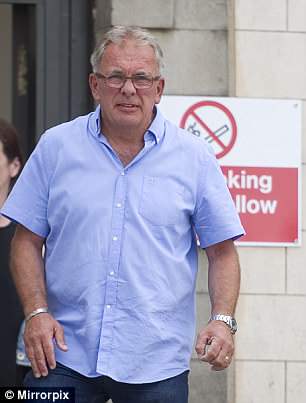 Witness Alasdair McIntosh, above, said he went for a massage on his ‘sore back

The court was told that Chang was selling sex through ads on Gumtree to local punters.

They paid between £80-£110 a time for sessions at their home or in the flat in the upmarket Lord Gambier Wharf development in Kirkcaldy’s harbour district, on the south-east coast of Scotland.

Police raided the ground floor flat on May 31 last year.

Prospective client Andrew Wilson said he had arranged appointments by text with Chang – and received a reply offering ‘the girlfriend experience’ or a ‘naked massage’ but had arranged to pay £40 for a non-sexual service.

James Saunders later told how he had handed £80 to Chang before receiving a ‘topless massage’ from a young Asian woman.

He said: ‘I got a phone number for it. It was in the paper. There was an advert for Tiffany’s massage services or something like that.

‘I think I asked what was available and the age of the girls.’

Mr Saunders then told the court that the young girl had entered the room topless and was only wearing a pair of knickers during the massage.

Mr Saunders added that ‘if you pay a bit extra, you get oral sex’.

Barry Livingstone, 45, who lived in the same block as the brothel, told how he would see different men arriving at the flats throughout the day and later found an advert offering massages from the property online.

He told a friend, the earlier witness Alasdair McIntosh, about the property but claimed he didn’t know he had visited it until he saw him at court where he ‘burst out laughing’.

But Chang insisted she was running a legitimate business – and said the £30,000 in dirty money she transferred to her native Taiwan was cash for her son.

Asked if she knew why the male clients would ask if other women were available when they turned up she said: ‘Some people want noodles today and rice tomorrow.’

He added: ‘Not only was the accused permitting prostitution, but she was managing provision of these services.

Chang, 53, of Eaton Road, Hove, Sussex, denied charges on indictment of keeping or managing a brothel at the flat in Lord Gambier Whard, Kirkcaldy, between April 18 2016 and May 31 2017.

She further denied transferring criminal property out of Scotland on various occasions between April 19 2016 and May 31 2017.

But after a five-day trial at Kirkcaldy Sheriff Court a jury took less than an hour to find her guilty of both charges by unanimous verdicts. Chang now faces a jail term when she returns to be sentenced next month.

Sheriff Jamie Gilchrist QC deferred sentence until June 27 for social work background reports and released her on bail in the meantime.