Christmas just wouldn’t be the same without a spine-tingling ghost story – and who better to tell it than Mr Christmas himself? Simon Callow, one of the nation’s best-loved actors, is synonymous with Charles Dickens and A Christmas Carol, having staged it many times.

‘I’ve been involved with A Christmas Carol for so long and in many different ways,’ says Simon. ‘It’s about ghosts. Dickens loved ghost stories – he wrote them, read them and adored them.’

No wonder then that Simon was Mark Gatiss’s first choice to play the lead in Sky Max’s new Christmas film The Amazing Mr Blunden, a remake of the 1972 film adapted from Antonia Barber’s children’s fantasy novel The Ghosts. The adventure starts for teenagers Jamie and Lucy Allen when the mysterious Mr Blunden offers their mother the chance to be the caretaker of a country house that’s said to be haunted.

Within its neglected grounds, Jamie and Lucy meet Sara and Georgie Latimer, a pair of ghostly children who say they are in danger from the murderous Mr and Mrs Wickens in 1821, and that their guardian, a Mr Blunden, is ignoring their fears. So they’ve time-travelled 200 years into the future to find help.

The present-day Mr Blunden then implores Jamie and Lucy to help him go back in time to 1821 to change history and save the Latimers from dying in a fire.

‘This is a story of redemption, like A Christmas Carol, except Blunden initiates it whereas Ebenezer Scrooge is visited by the ghosts who force him to face the facts,’ explains Simon. 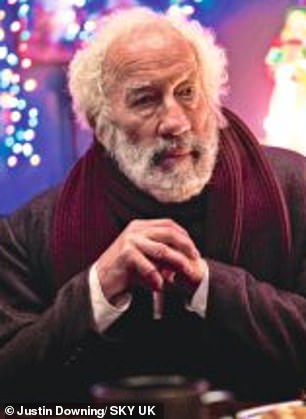 ‘Blunden knows that what he did all those years ago was disgraceful. But he’s an irresistible character. He’s charming, eccentric, vulnerable and consumed by guilt. He wants to turn back the clock.’

It’s a tale that Mark felt was important to retell to a modern audience. ‘The original Lionel Jeffries film is one of my favourites,’ he says.

‘I saw it at school when I was seven in the most perfect circumstances; it was the last Friday before we broke up for Christmas.

‘It was on our battered old school projector and it was everything I love. It was ghosts, time travel, magic, faintly sinister with brilliant baddies. It had everything.’

Mark, 55, grew malicious-looking facial hair to play the half-mad pyromaniac Mr Wickens, who with his wife plans to murder Sara and Georgie for their inheritance. Mrs Wickens, originally played by Diana Dors, is reprised here by Tamsin Greig.

‘Mr and Mrs Wickens fuel each other’s villainous characteristics, they egg each other on,’ says Tamsin, 55.

‘Mrs Wickens is not a panto villain, she’s frightening as she does the most evil thing – she tries to kill the children who are to inherit a fortune so her daughter, Bella, can get it.

‘It’s a bizarre love. There’s something from her heart motivating her. But I still wanted her to be the kind of villain who makes children’s hearts race.’ 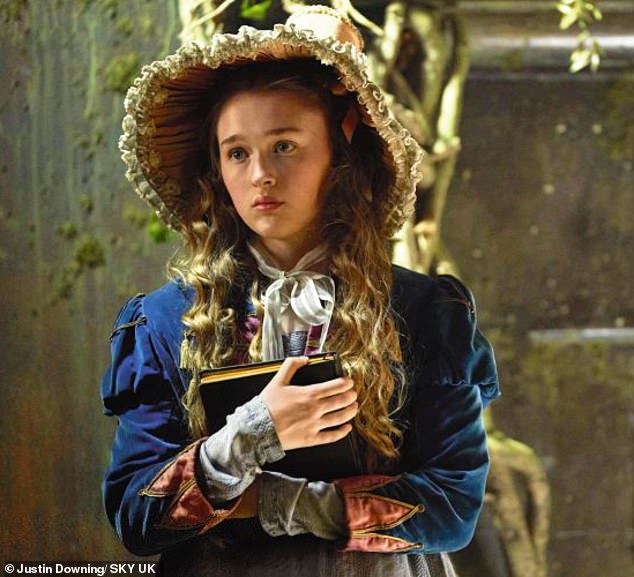 Jamie and Lucy meet Sara (pictured) and Georgie Latimer, a pair of ghostly children who say they are in danger from the murderous Mr and Mrs Wickens in 1821

Simon, 72, confesses that, unlike Mark, he’s not big on ghost stories, even if he’s had a supernatural experience. ‘Once I was living and working in Los Angeles in a dismal flat. It wasn’t going well and I was feeling down.

‘Extraordinarily, my maternal grandmother, almost the most important person in my life, sort of materialised in front of me and murmured a few words. It was something banal like, “Hello, darling. Lovely to see you and don’t work too hard.” Then she went.

‘I thought, “This is absurd. How can she be there?” I was very moved. I repeat, I have no superstitions.

‘I walk under every ladder, I long to see black cats crossing my path. But, in a difficult situation, I might have wanted to invoke my grandmother’s spirit.’

Like the 2021 Mr Blunden, she was clearly benevolent. ‘Yes. Blunden reminded me of one of my absolute favourite parts ever, The Reverend Mr Beebe in A Room With A View, who also was benevolent – a lovely thing to be in our malevolent world.’