Heartwarming footage shows the magical moment a little boy, who lost both his legs to sepsis, walks for the first time into the arms of his doting grandma.

William Reckless, four, from Sutton-in-Ashfield, Nottinghamshire, almost died when he contracted a life-threatening case of sepsis in January.

The brave boy battled the killer infection and underwent multiple amputations losing both of his lower legs and parts of nine fingers – with only his right thumb left intact. 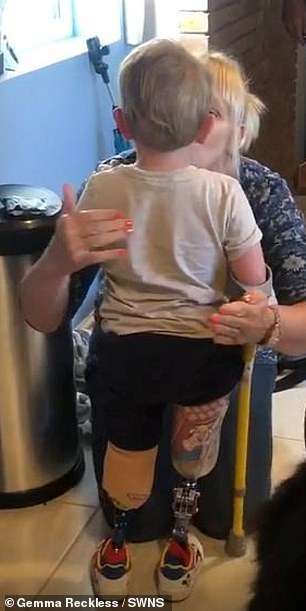 William Reckless, 4, from Sutton-in-Ashfield, takes his first steps unaided after losing both his lower legs to sepsis 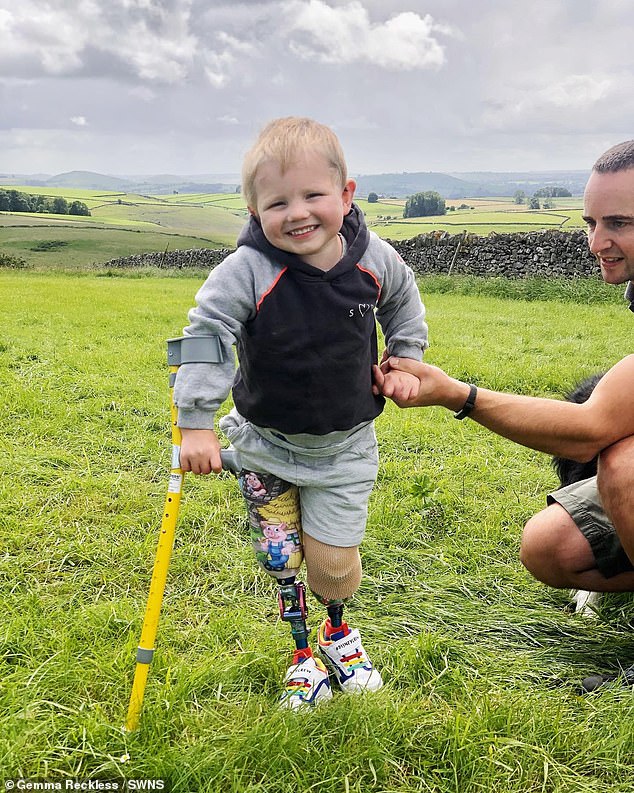 Smiling face of determination: William Reckless gives a cheeky grin as he takes trip to the great outdoors with father Michael , and his family

However, William has made amazing progress and a video posted online shows him taking his first steps wearing his new prosthetic legs.

The video, taken in his granmother Trish Brennan’s house in Killamarsh, captures the magical moment William walks unaided into her arms.

She holds her arms open and encourages William by counting his steps as he slowly walks towards her.

William makes it into her arms and is rewarded with a cuddle and a kiss.

The video shows the fast progress he has made over the last few months- from taking his new legs home in May and being able to walk on his own by mid-July.

Mum, Gemma Reckless, 30, a police officer from Sheffield, said that watching her son take his first steps after the months of pain was ‘magical’. 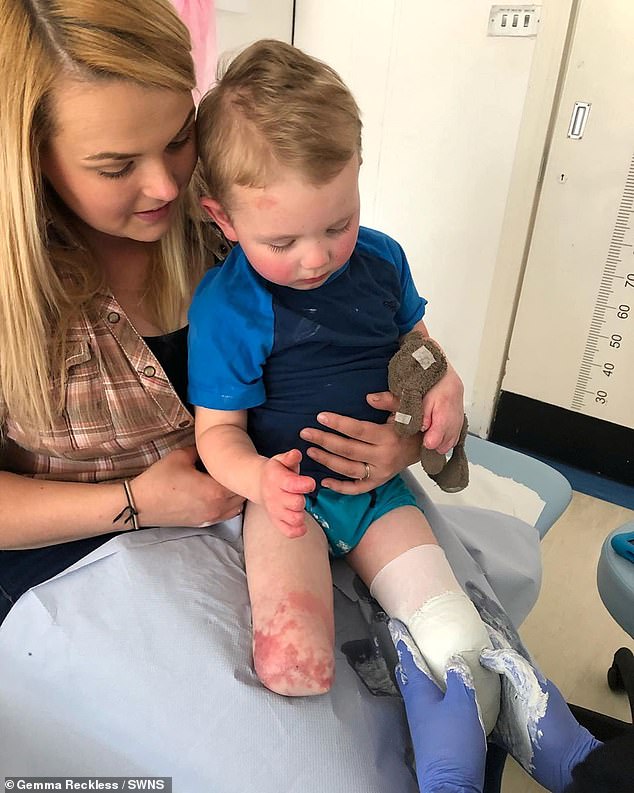 The little fighter underwent multiple amputations losing both of his lower legs and parts of nine fingers. He is pictured here with mum, Gemma, 30, having his prosthetic legs fitted 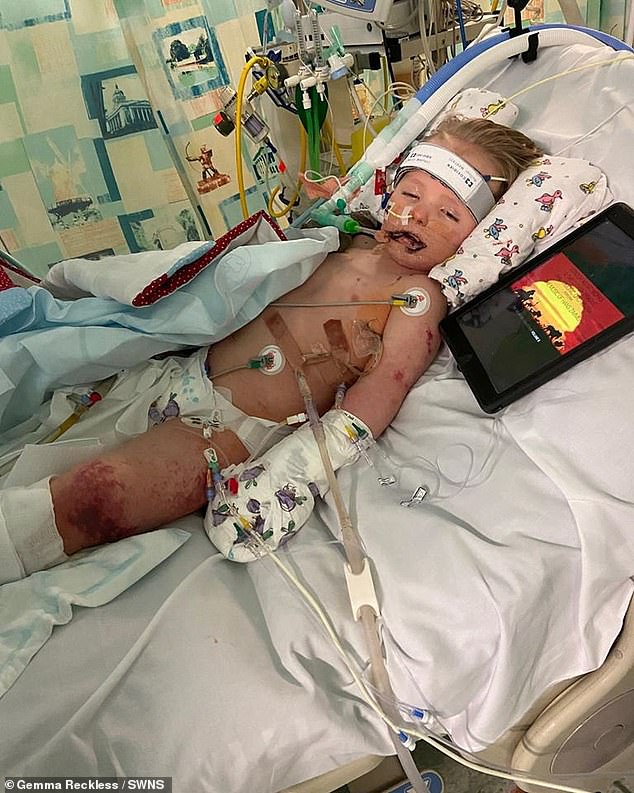 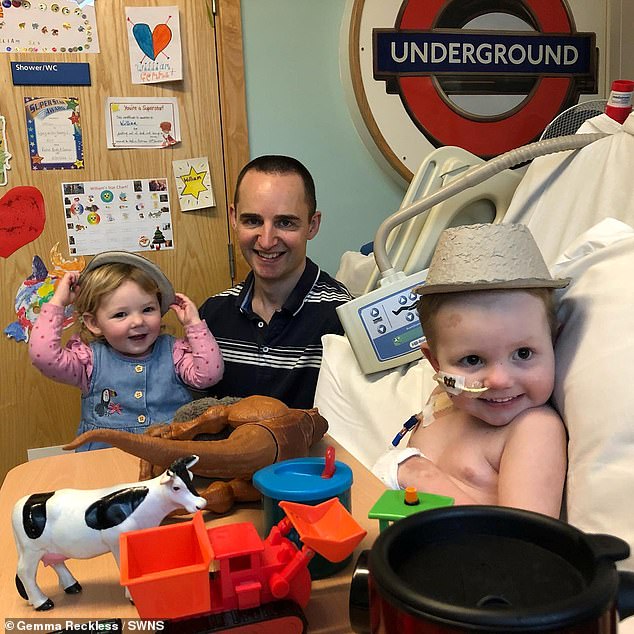 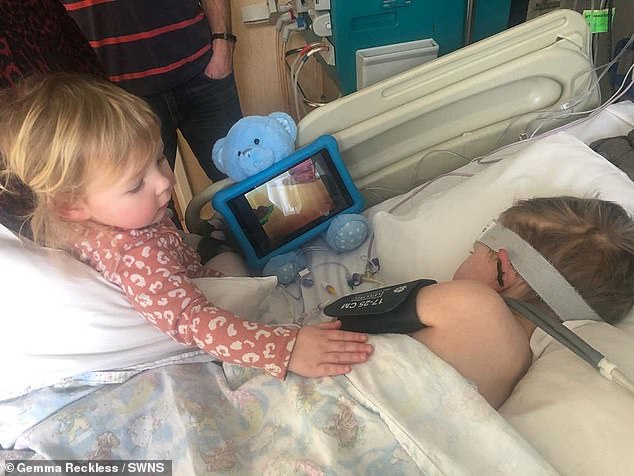 ‘When your baby takes their first steps, it’s magical,’ she said.

‘But when they have to learn a second time, after months of watching their pain, fear, frustration, hard work and determination, the pride we feel is something else.’

William Reckless became seriously ill in January after he developed sepsis while suffering from scarlet fever.

He almost died when his heart stopped and had to be in intensive care for three months as he battled complications, leading to his lower legs and parts of his fingers being amputated.

However, his family say throughout the months of physio the little boy has never stopped smiling.

His mum Gemma said that when he was told he would be losing his legs, he seemed to accept everything he woke from the amputation with a smile on his face.

He was soon telling doctors and nurses his left leg had been eaten by a crocodile and the right taken by a shark.

His mum has documented her son’s journey on her Facebook page for business Little Gems. 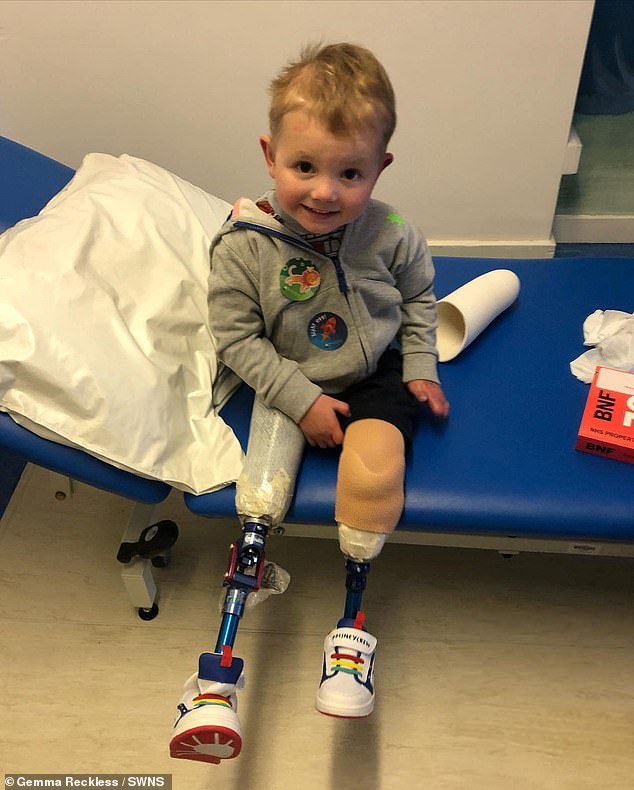 Smiling with his new legs: William Reckless, 4, with his prosthetics in hospital after sepsis stripped him of both limbs 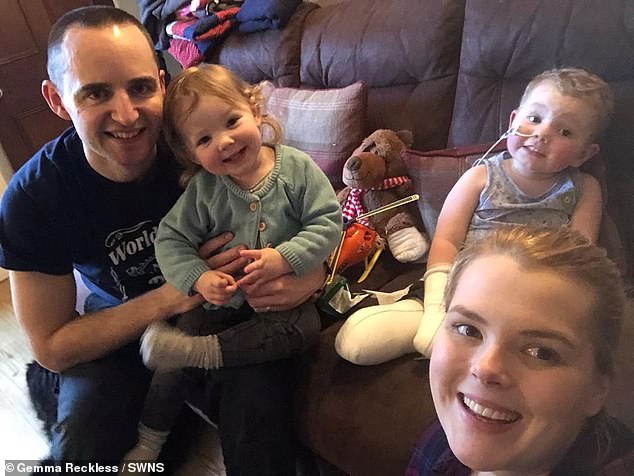 William Reckless, pictured with father Michael, sister Georgia and mum Gemma back at their home

She wrote: ‘I never set out to share this journey I wish we never experienced, but the support and love from this community meant we gained a huge family of people invested in William, and for that I am thankful.’