MailOnline reviews the first British smartphone for over five years

In an attempt to shake up the smartphone industry, London tech company Nothing this month released its first smartphone, the £399 ‘phone (1)’.

Nothing’s device, which is the first British smartphone to be released for more than half a decade, boasts a unique light interface that flashes in different patterns.

It also has a ‘minimalist’ design with a frame made from recycled aluminium and an adapted version of Android 12 that does away with the pointless pre-installed apps.

The firm will be hoping its device fares better than the last British smartphone, which was made by another London-based firm, called Wileyfox.

Wileyfox released three generations of phones between 2015 and 2016, but the company never turned a profit and went into administration in 2018.

MailOnline spent a week trying tried out phone (1), which the company says ‘marks the start of change in a stagnant industry’ as it looks to challenge Apple and Samsung in a crowded smartphone market. 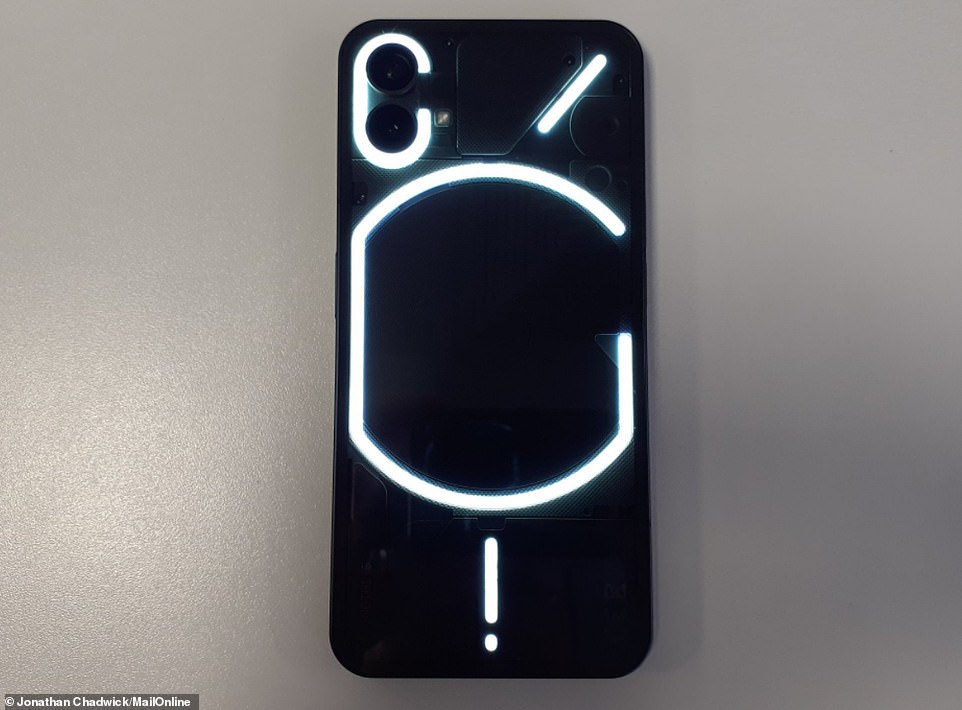 London tech company Nothing has released its first smartphone, the ‘phone (1)’, which features a futuristic ‘glyph interface’ that lights up (pictured) 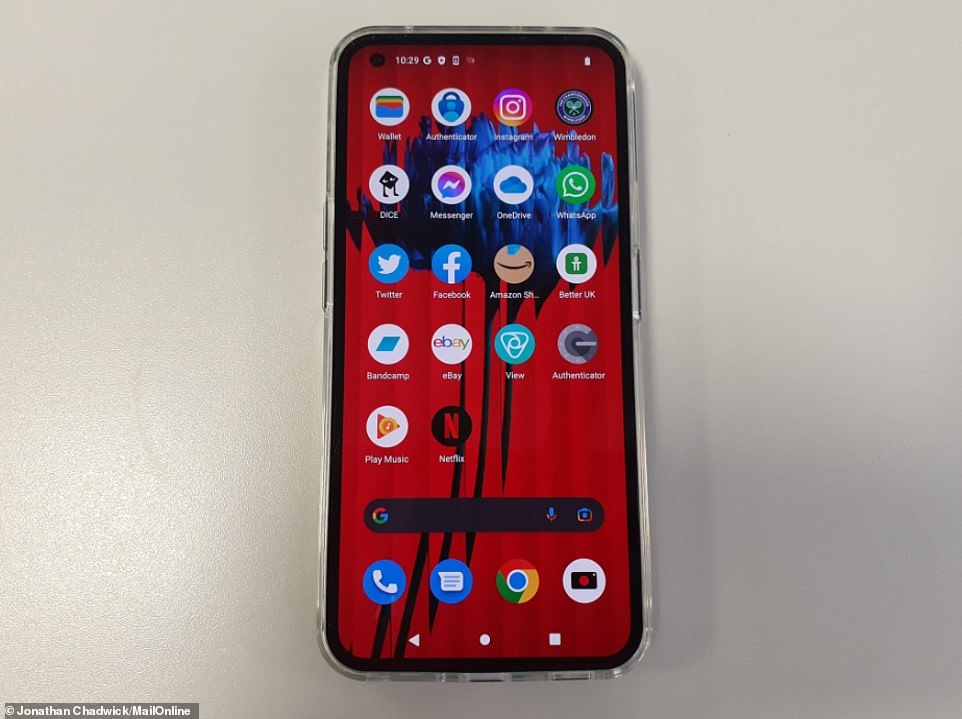 O2 is the network partner for phone (1) in the UK. Nothing has also signed with Germany’s Deutsche Telekom and Indian online retailer Flipkart to market the phone.

What first struck me about phone (1) was its hefty size and weight. It accommodates a 6.5-inch screen and weighs 194 grams – a fair bit bigger than the 6.1-inch screen and 174g weight of Apple’s flagship iPhone 13.

It also has a 4,500mAh battery, Gorilla Glass on the front and back, dual 50-megapixel rear cameras and a hole punch front-facing camera – which means no ugly notch at the top like the iPhone 13 has.

Nothing also says the device has its own operating system – ‘Nothing OS’, powered by a Qualcomm Snapdragon processor, but it’s essentially an adapted version of Android 12.

In keeping with the company’s minimalist aesthetic, Nothing OS has taken out the ‘bloatware’ – pointless apps that take up space and needlessly drain battery life.

On the back of phone (1), the transparent glass covers what seems to be the device’s unique selling point, a ‘glyph interface’ – a series of LED lights that flash when the device gets a call, receives notifications, takes photos and more.

By going to Settings, users can choose a particular light display and an accompanying pattern of bleeps and bloops as their default ringtone.

Users can also assign a light display to each one of their phone contacts. For example, I can assign a display called ‘radiate’ to my mum, so I know when she’s ringing by looking at the glyph interface.

But this only works if the phone is face down with the interface facing upwards, and may require users to learn lots of different light patterns to work out who’s calling. 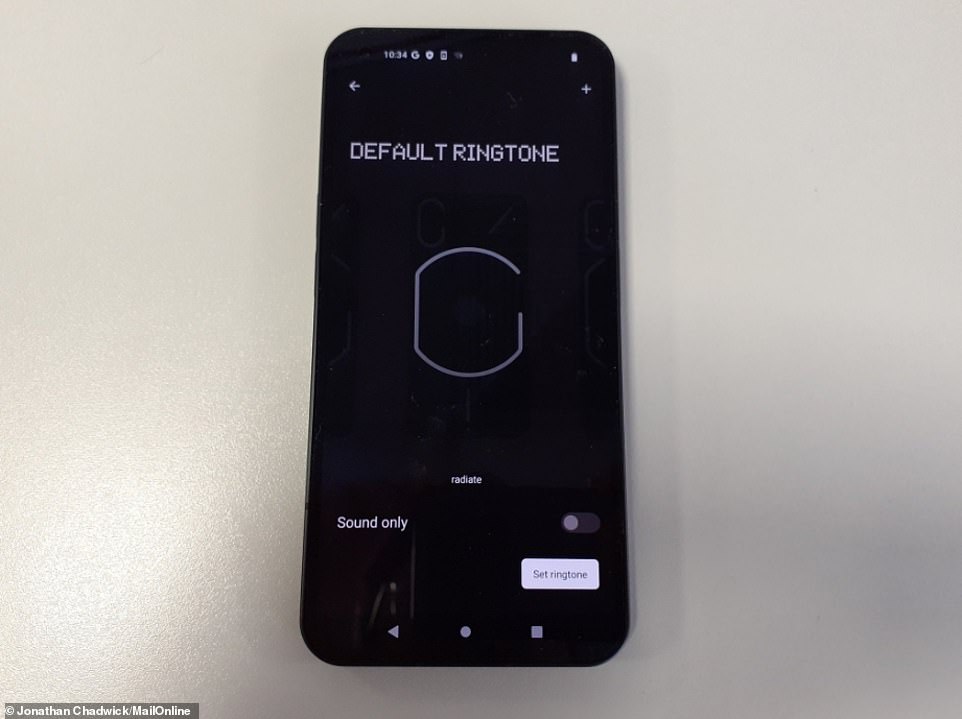 By going to Settings, users can choose a particular light display and an accompanying pattern of bleeps and bloops as their default ringtone 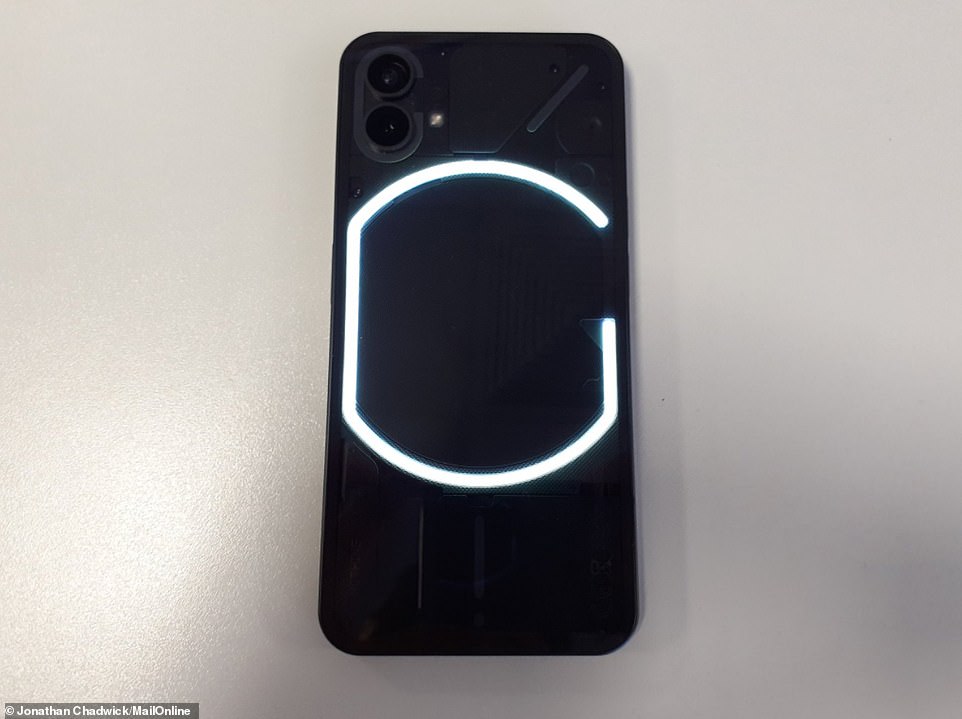 Pictured is how the ‘radiate’ ringtone, and the accompanying light pattern, looks on the glyph interface, which is located under glass on the back of the device

Users can also opt to light up the whole of the glyph interface when they’re taking a photo, as a more gentle alternative to the powerful torch light.

One particular part of the glyph interface towards the bottom is a LED light that looks like an exclamation mark. When charging the phone with a USB-C charger, this light gradually gets more and more illuminated, like a progress bar.

The glass back also covers a wireless charging coil, which can be used to charge up Nothing’s other product, its £99 earphones (‘ear 1’).

Another fun feature that can be toggled on and off in Settings is a small red LED light that flashes when you’re filming video. 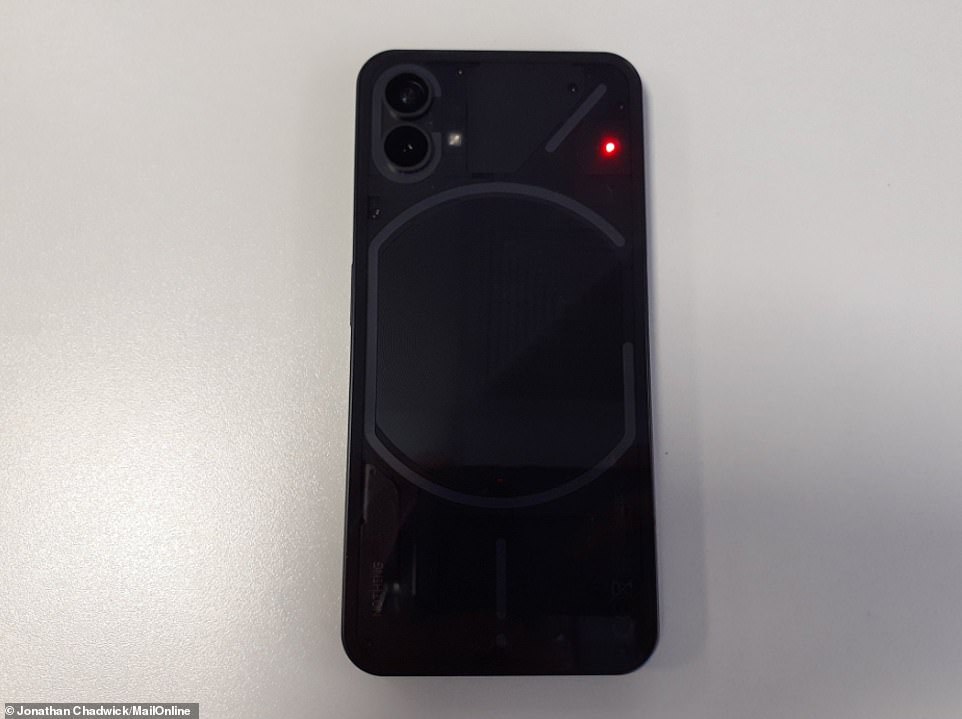 Users have the option to turn on an option to flash a small red light on and off when filming video, like the VCR recorders of our youth

Nothing told me it’s meant to be a reference to the old VCR recorders of our youth – another indicator that this phone’s target market is hipster millennials who grew up with ’90s gadgets.

Meanwhile, phone (1) has a 16-megapixel selfie camera and dual 50-megapixel rear cameras, one of which provides ‘exceptional detail in any light’ and ‘always sharp shots’, the firm says, thanks to a Sony IMX766 sensor.

I tried out phone (1)’s camera and compared the results with shots from my Samsung A20e taken from the same spot – and the results show notable differences, including a clearer capture, a greater use of light and a more expansive field of view. 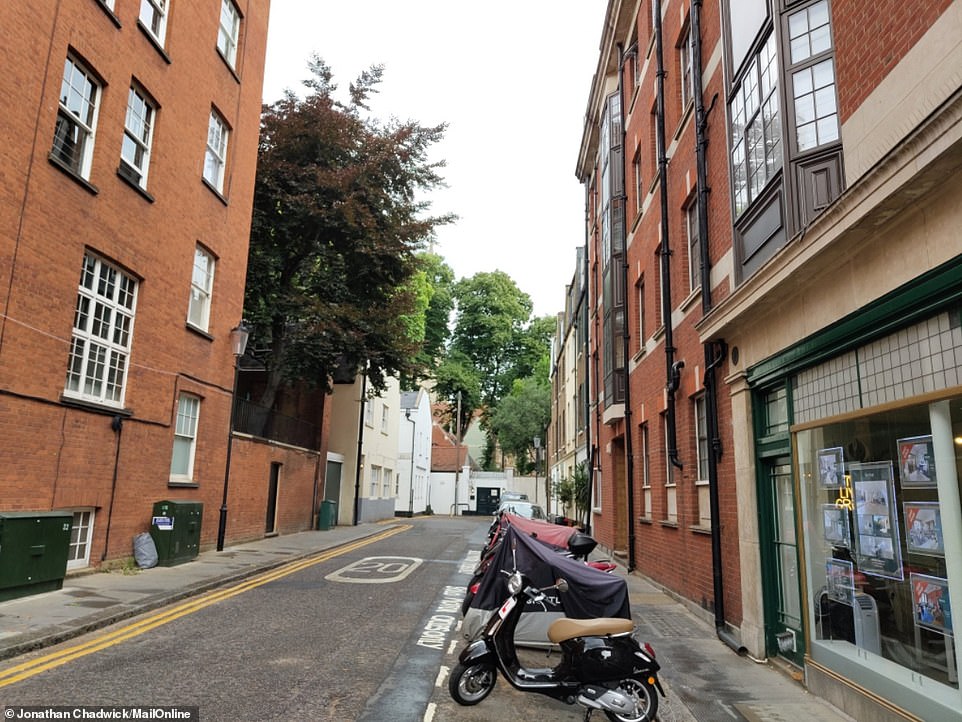 Phone (1) has a 16-megapixel selfie camera and dual 50-megapixel rear cameras, one of which provides ‘exceptional detail in any light’ and ‘always sharp shots’, the firm says. Pictured is a shot of a London street taken with phone (1) 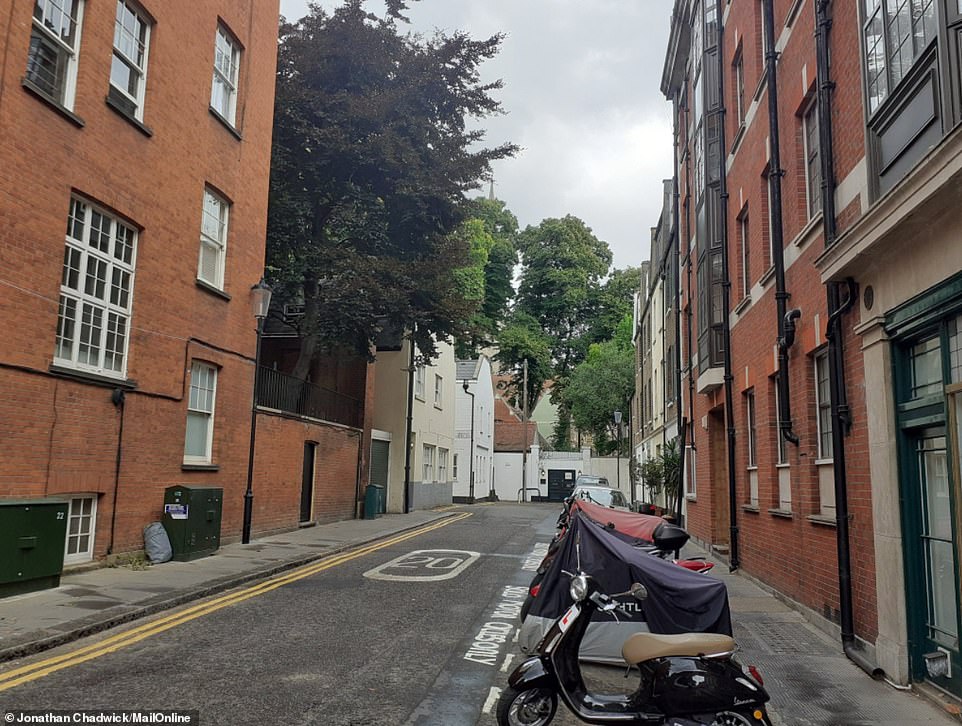 This is a photo taken from the same spot on the London street using a Samsung A20e. The phone (1) image is arguably clearer, brighter and wider

Another thing I liked was how Nothing has made use of the smartphone side button on the right of the device. Pressing it twice brings up the camera, while holding it down brings up Google Assistant.

Other smartphones, including my current Samsung device, have the side button as the on-off switch – but it’s pretty much wasted, because who turns their smartphone off these days?

I hate it when it’s difficult to open the camera on a smartphone. Before you know it that fleeting photo opportunity has gone, and you’re still fruitlessly swiping at the screen.

So the ability to tap the side button twice to open the camera means it’s ready to take photos before it’s even halfway out my pocket.

Meanwhile, its 4,500mAh battery gave me 18 hours of use with one full charge, so it was easily enough to see me through the day. 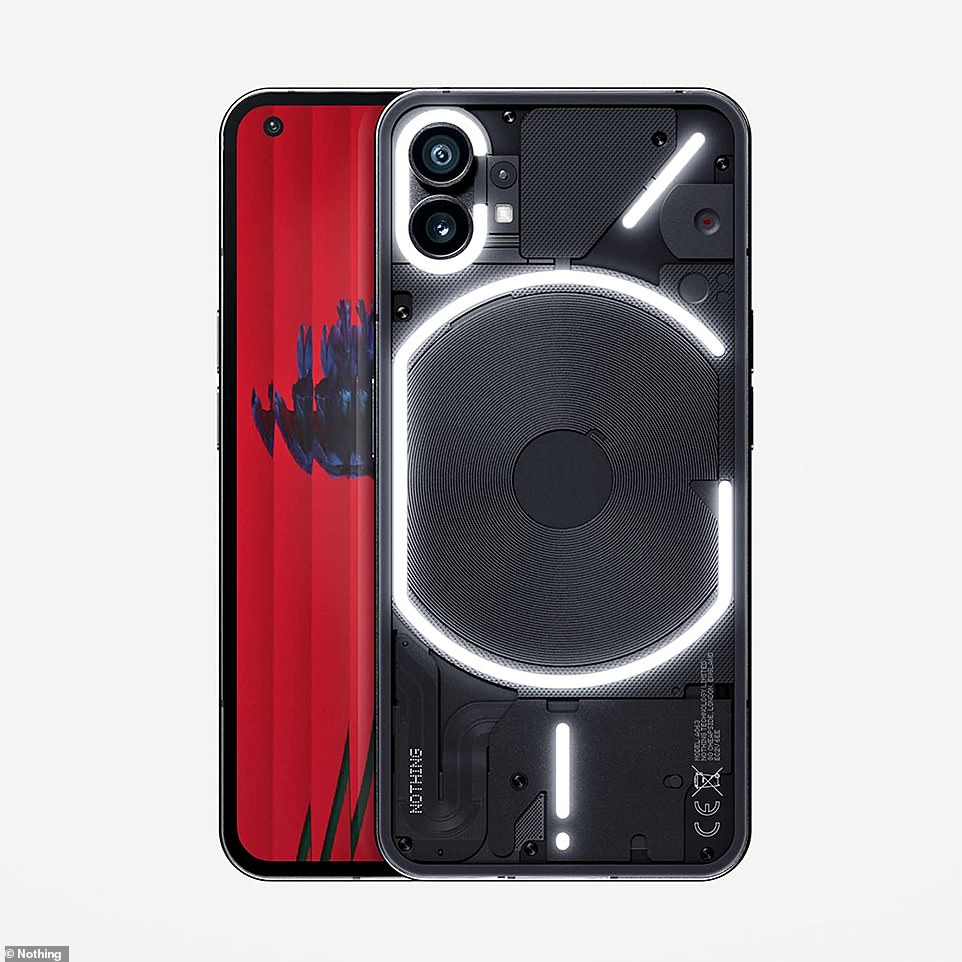 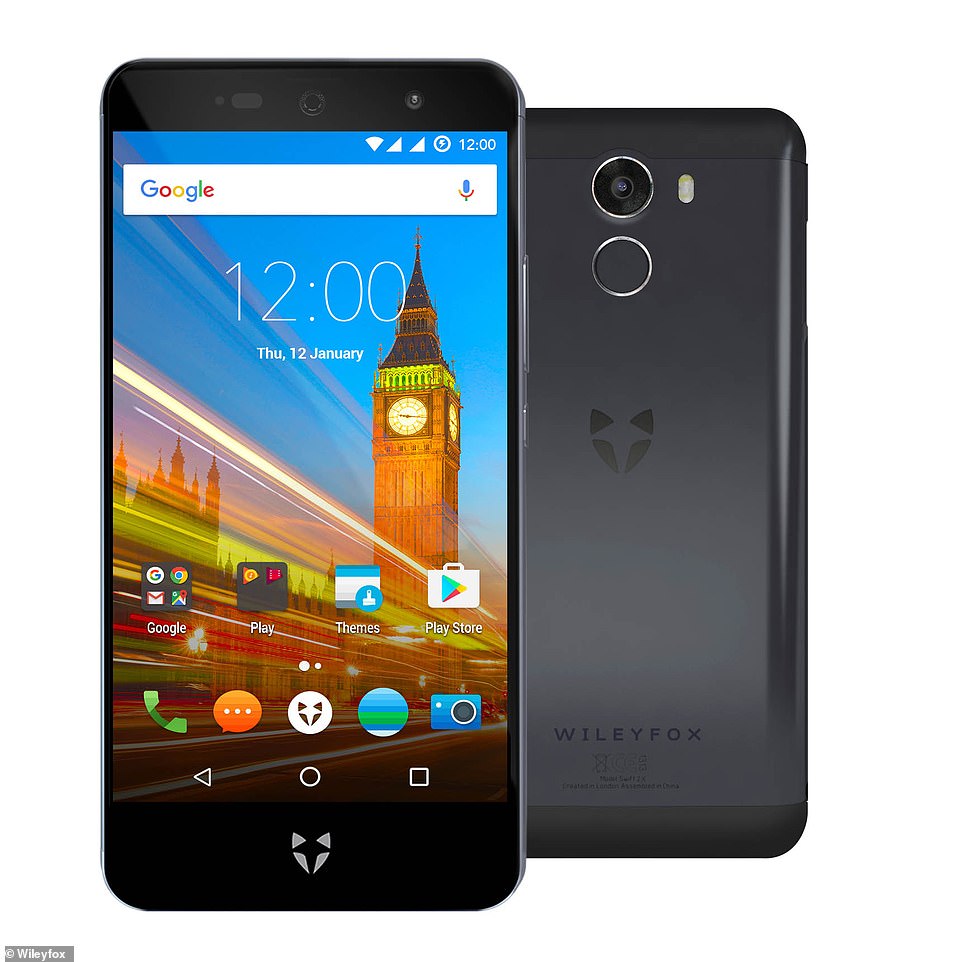 Nothing will be hoping its device fares better than the last British smartphone, which was made by another London-based firm, called Wileyfox. Pictured is the Wileyfox Swift 2 X 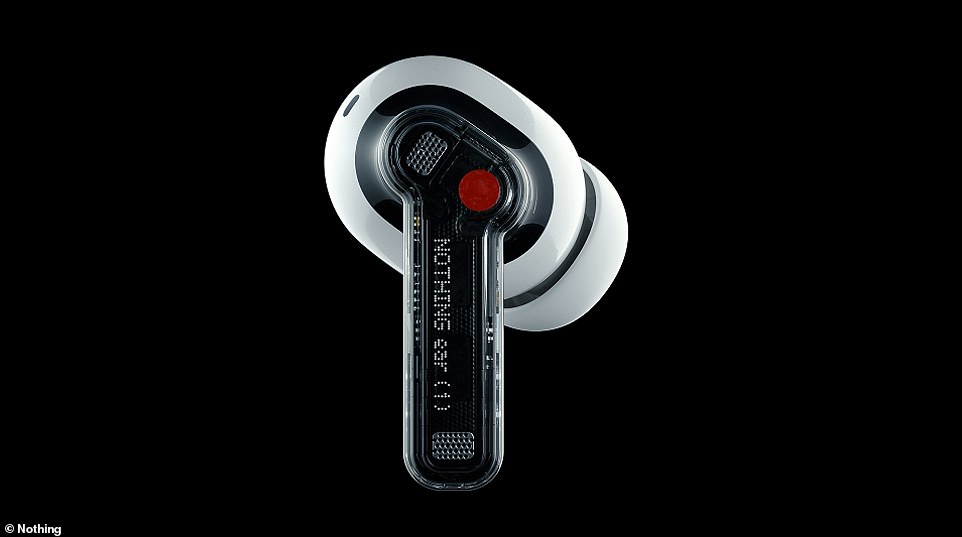 Nothing has already released a pair of wireless headphones (called ‘ear (1)’, pictured), which has transparent parts ‘to highlight and celebrate the craftsmanship underneath’

Overall, I really loved the Nothing phone because it’s a genuinely fun device, which is how technology should be.

The glyph interface is a super addictive feature that kept me entertained for hours, the display is clear and crisp, usability is slick and easy, and the price is pretty reasonable for what this phone provides.

Nothing – which was founded by Swedish entrepreneur Carl Pei less than two years ago – claims to make devices for people who are ‘tired of the same old technology’, and plan to add more devices to their ‘ecosystem of multiple products’.

The company wouldn’t give me a single hint what its next product in this ecosystem would be, which left me speculating – could it be a tablet? A smartwatch? A pair of smart glasses? Or something that no other tech company has done before?

Whatever it is, it’s genuinely exciting to have a technology company on our doorstep that’s rivalling some of the world’s biggest powerhouses, like Apple, Samsung and Google.

Phone (1) is available in both white and black and prices start at £399, although it is only available in the UK, Europe and Asia, so Americans may have to turn to eBay to get their hands on one.

WHO IS CARL PEI?

Nothing is a consumer technology company based in London, England, founded in October 2020 Carl Pei.

Pei is a Beijing-born Swedish entrepreneur who co-founded Chinese consumer electronics firm OnePlus back in 2013.

He claims the Nothing phone will be ‘the most compelling alternative to Apple’s ecosystem’.

‘For too long, the smartphone market has been dominated by the same players and that’s led to unimaginative, bland design across the board,’ said Pei. 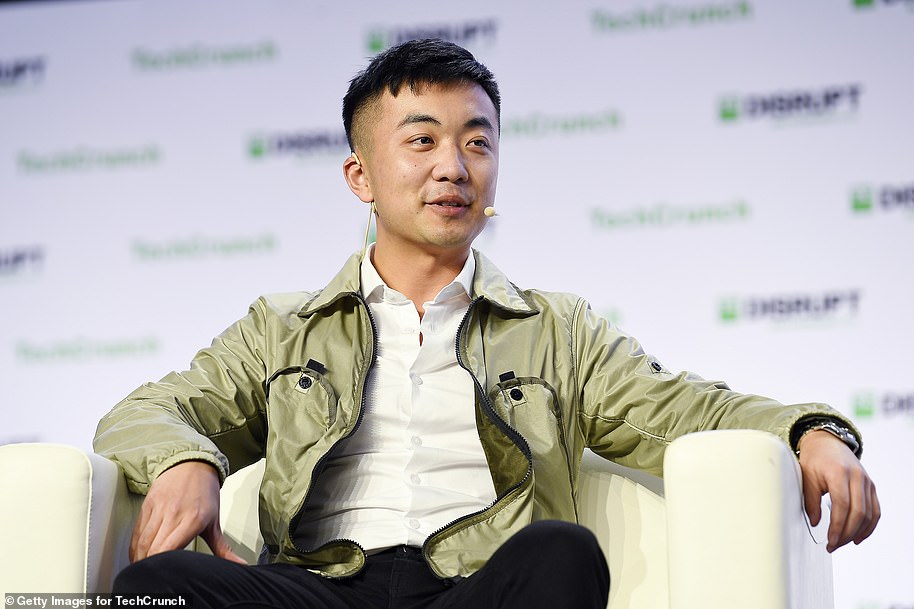 ‘These players have created closed-off ecosystems that lock people in, limiting their choice about the products they can access and use. This is what I want to change with Nothing.’

According to Pei, the UK has a strong track record of creating software companies, but not hardware.

The firm is privately owned and has backing from investors including GV (formerly Google Ventures), Kevin Lin (co-founder of live streaming service Twitch) and Steve Huffman (co-founder and CEO of Reddit).