I’ve swam in piranha-infested waters and scaled punishing mountains but the thought of boarding a 5,686-passenger cruise liner actually filled me with more dread than my perilous escapades.

I’d been invited, along with a crowd including Holly Willoughby and Sofia Loren, to board the new £1billion ship Bellissima from Italian family-owned company MSC Cruises as it docked in Southampton and I spent two nights getting into the cruising swing of things.

After boarding the monster boat, I quickly became swept into a bizarre world featuring staircases crafted out of Swarovski crystals (each step alone cost £10,000 to make), constantly-flowing food bars and a rather wacky nightclub housed inside a basketball court. I certainly felt a bit at sea!

MailOnline’s Sadie Whitelocks boarded the MSC Bellissima in Southampton ahead of its maiden voyage. Above, she stands on one of the Swarovski crystal staircases, with each step alone costing £10,000 to make 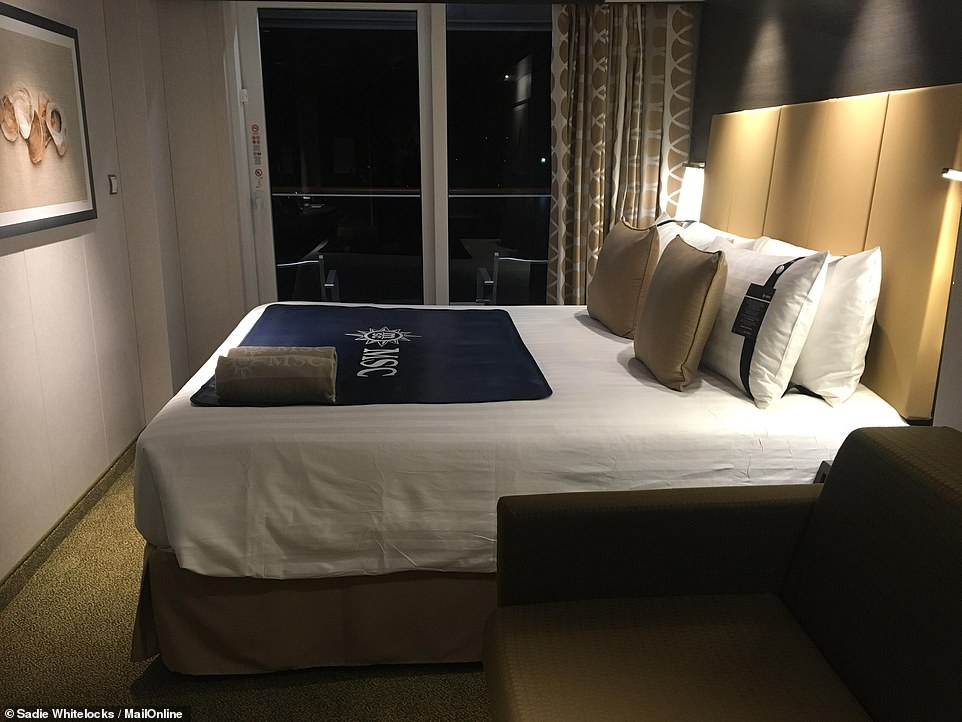 Sadie spent two nights on the ship in a balcony cabin, with neutral interiors and outdoor seating 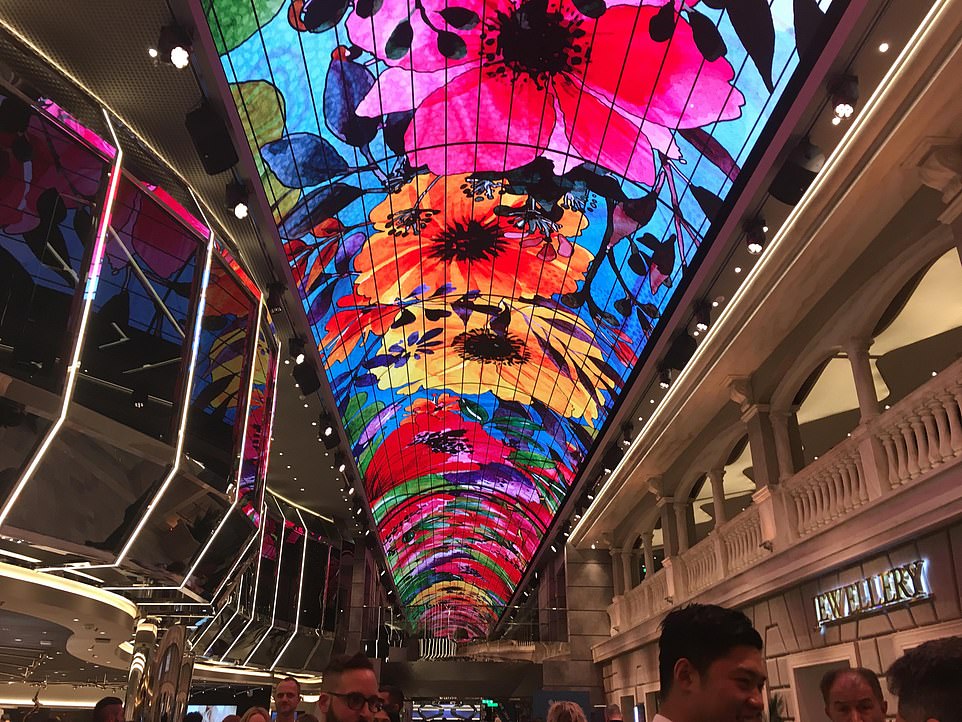 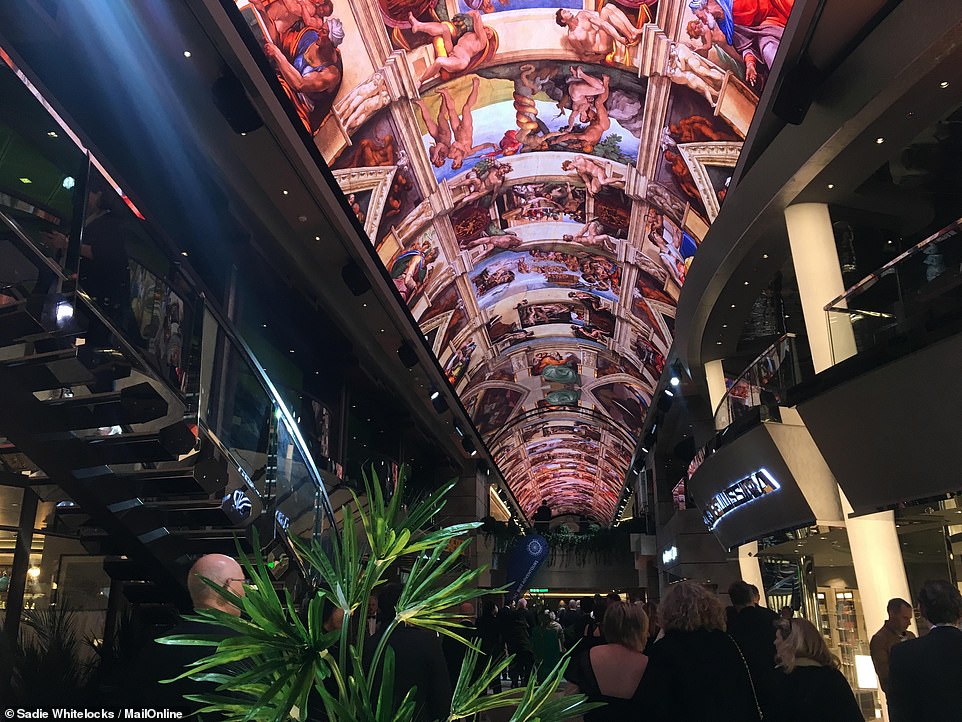 However, my initial preconceptions of being on a mega cruise ship were instantly quashed on getting inside the mammoth structure with no bingo session in sight or drab, casino-esque interiors.

MSC Bellissima was quite the opposite of anything I’d imagined.

The whole place seemed to sparkle, from those blinding crystal staircases to the mirrored elevators.

Granted the place was new, but I couldn’t help being seduced a little by all the glitz.

I checked into a balcony cabin on the 14th floor, which featured a neutral clean decor, a couch, desk, double bed, outdoor seating and a shower room. 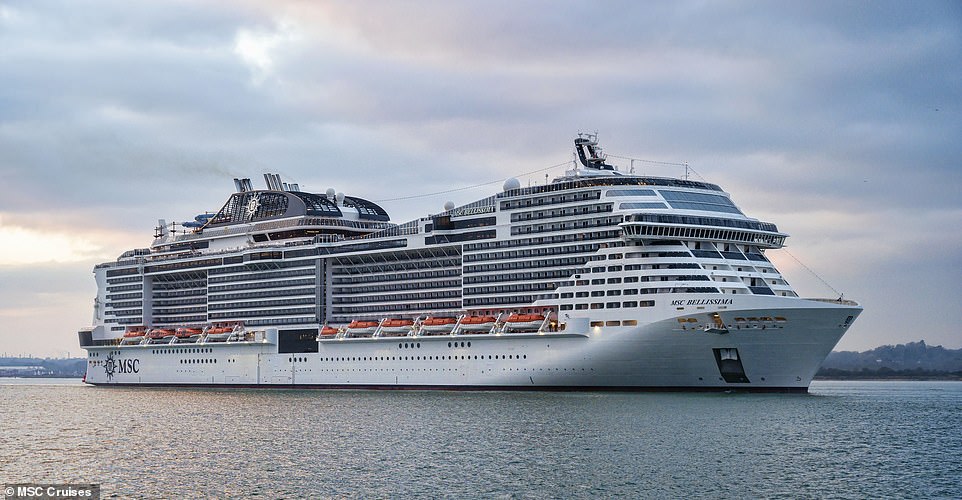 The ship will depart from the UK on her maiden voyage on March 24 taking passengers on a seven-night Mediterranean trip leaving from Genoa, Italy 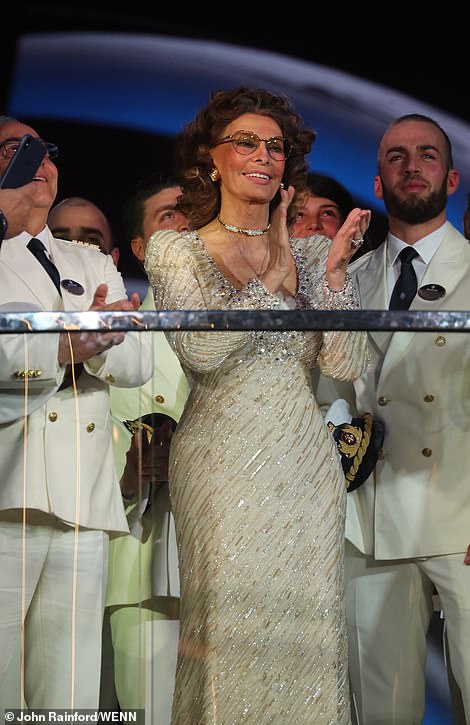 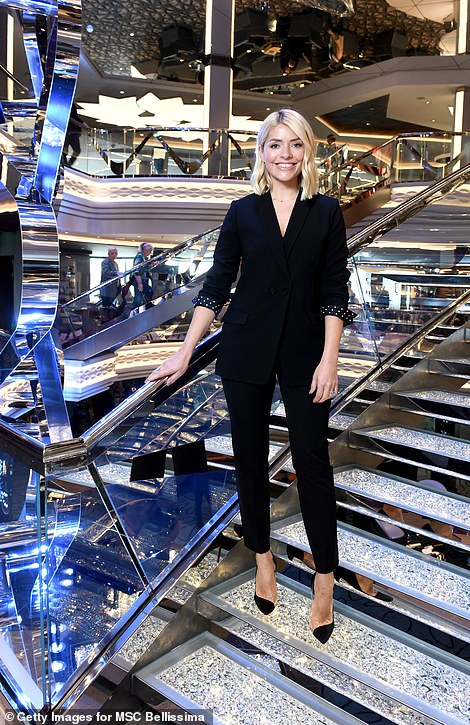 Sophia Loren helped to christen the ship over the weekend (left), while Holly Willoughby was also on board to help host proceedings for the MSC Bellissima’s naming ceremony (right) 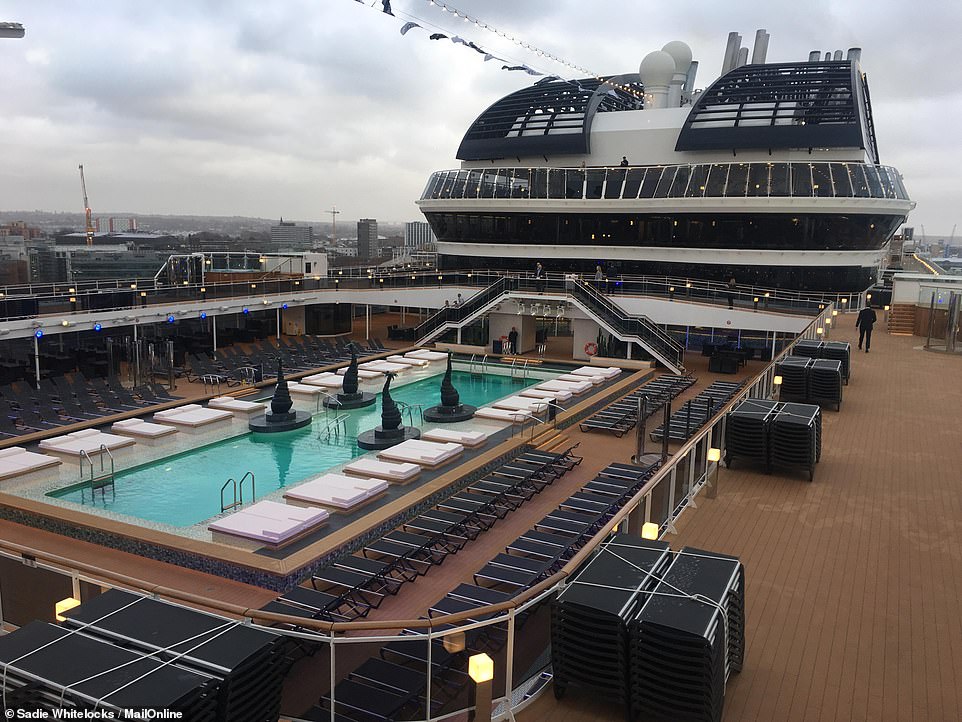 A view of the top deck of the ship, complete with a pool and sun lounger area 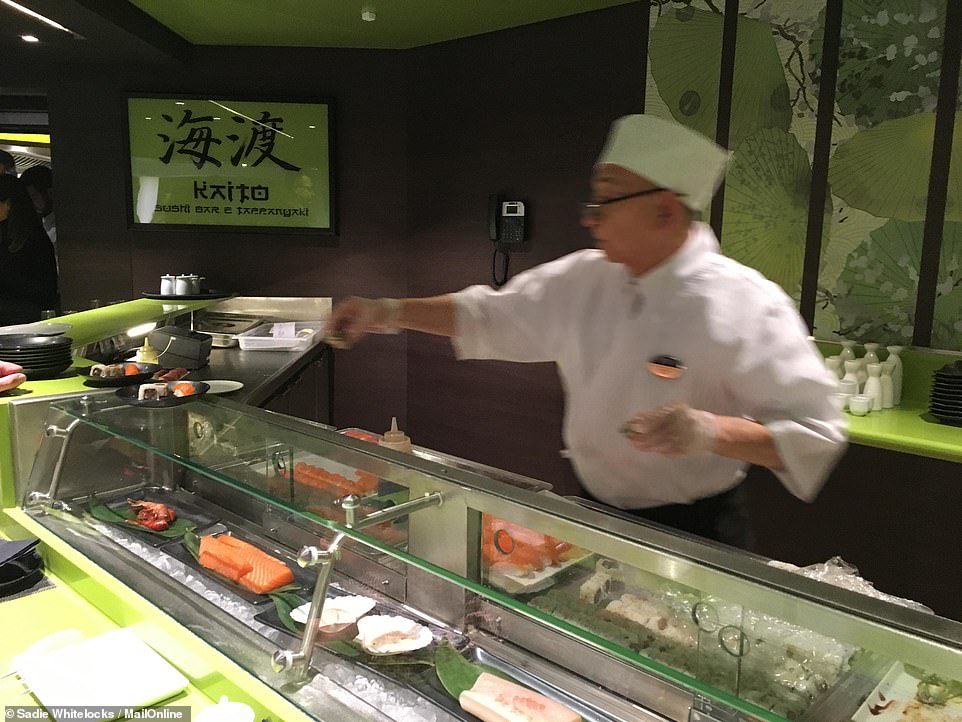 There are 12 restaurants on the cruise ship including Kaito, which boats a sushi bar and teppanyaki grilling station 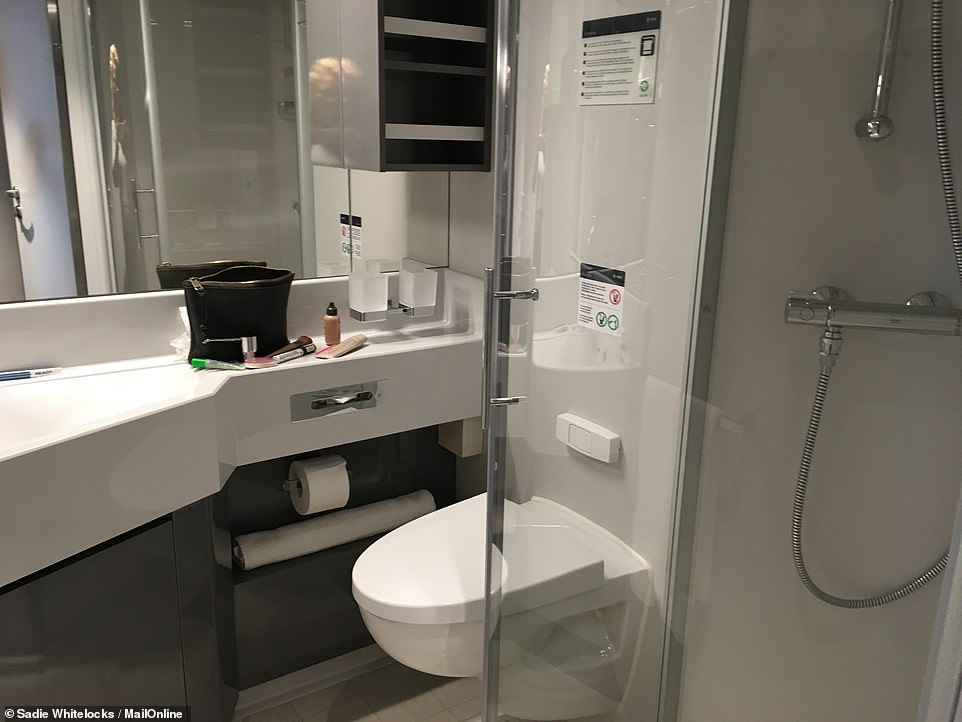 A view of the shower room in Sadie’s balcony room

Perks of the room included, good quality hangers in the wardrobe, handy usb charging points and a pretty comfortable bed.

After having a quick shower, I ventured to one of the 12 eateries to get some dinner.

We were treated to an a la carte dinner in Le Cerisier restaurant.

This is one of the two restaurants included in the package price, and it did have the kind of cruise ship atmosphere I expected with a large dining room configured a bit like one of those seemingly never ending Chinese restaurants and fairly bright lighting. It seats 828 people in total.

But defying my low expectation of wilted lettuce and grey-coloured meat, the food offering was pretty delicious.

The multi-course medley included a trio of duck or smoked salmon to start, some homemade ravioli and Mediterranean sea bass or roasted New Zealand loin of lamb for mains. This was rounded out with a very moreish slab of chocolate tonga bean tart. 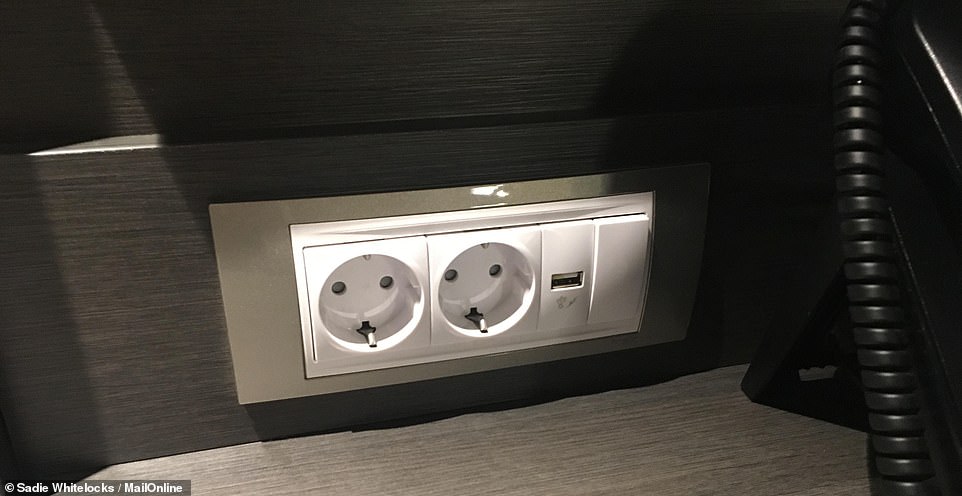 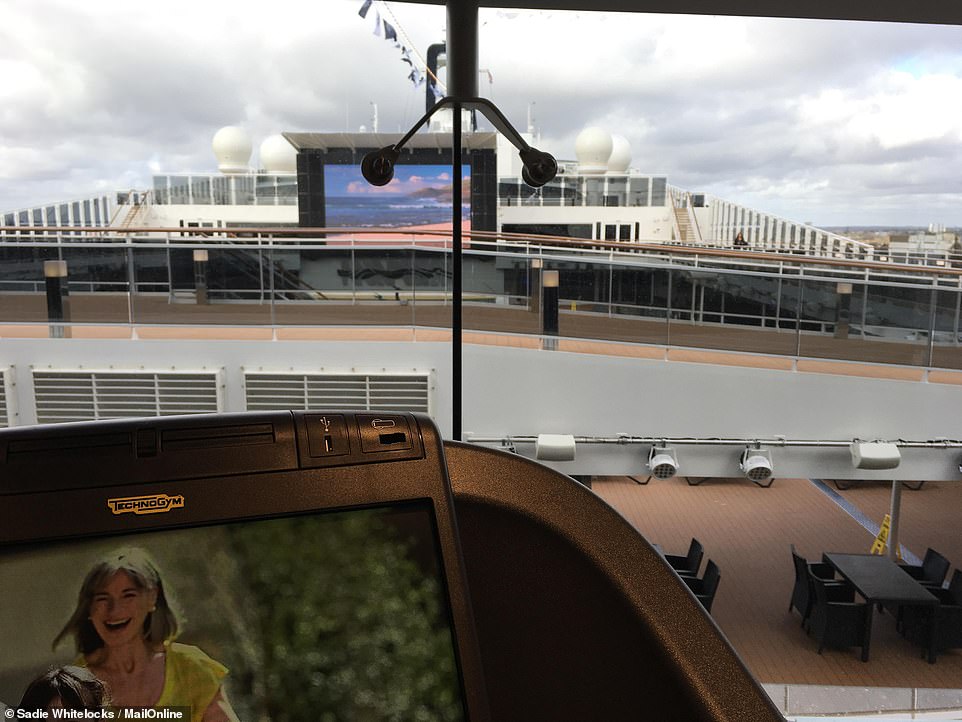 Sadie said she was impressed by the large gym, with the treadmills looking out over the top deck and beyond 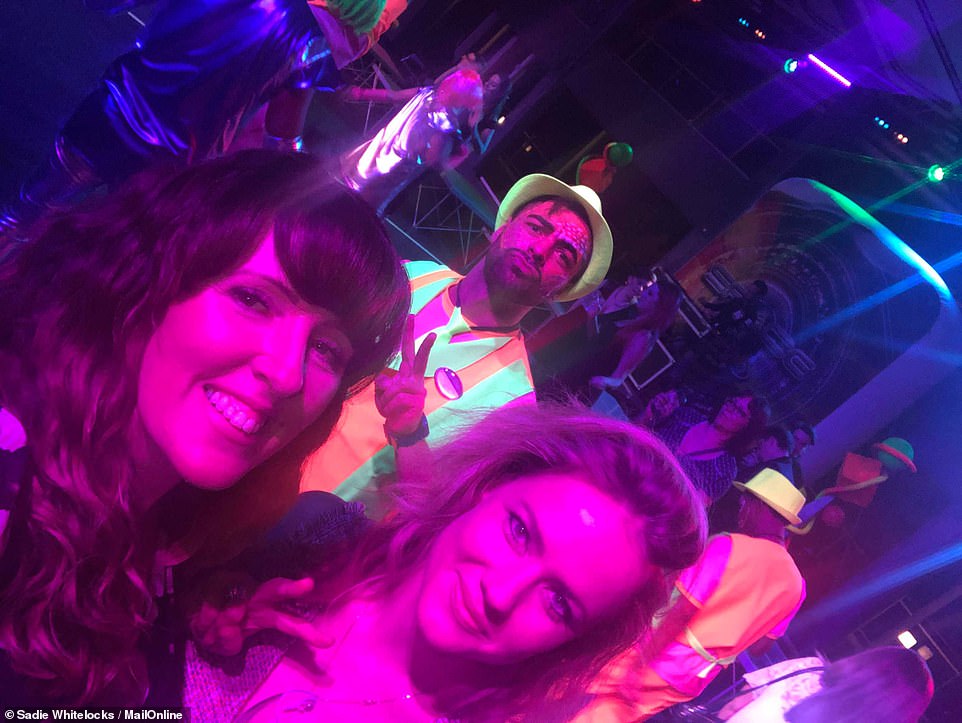 Sadie, pictured with a friend, found herself in the boat’s basketball, which had been transformed into a nightclub

After dinner, our programme revealed that there would be a disco on the 16th floor.

The evening soon descended into a bizarre haze as everyone boogied away in a cavernous basketball court transformed into a club.

At breakfast the next morning in the bright and airy Poseidena restaurant, I expressed by surprise at what a great night it had been and others echoed the same sentiment.

In a bid to sweat out my sore head, I ventured to the ship’s gym after grabbing a bite to eat.

On walking into the slick studio, I was instantly impressed by the space, with a good spread of new equipment and floor-to-ceiling windows looking out over the top deck.

As I ran on the treadmill I could soak up views of the Southampton marina and people wandering around outside, excitedly exploring.

In the changing room, there was a well-heated sauna and after that, I pretty much felt like new. Along with the gym, another space that blew me away was the state-of-the-art spa with a thermal treatment area boasting saunas, an ice bath and relaxation areas. 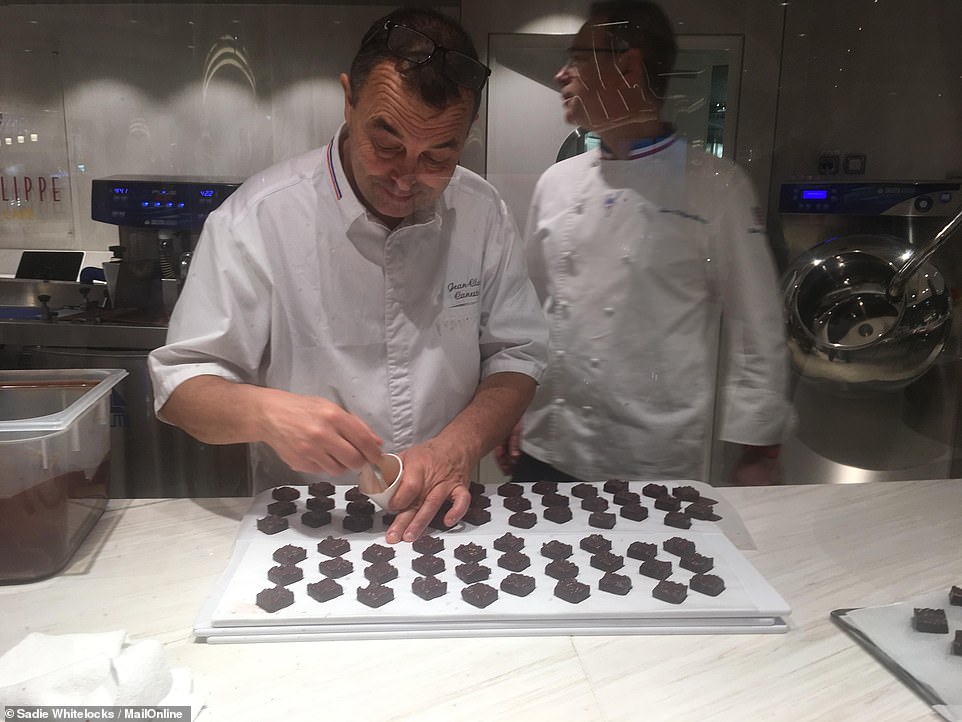 The boat even has a chocolate shop by world-renowned pastry chef Jean-Philippe Maury, and guests can see treats being made up before them with an open kitchen 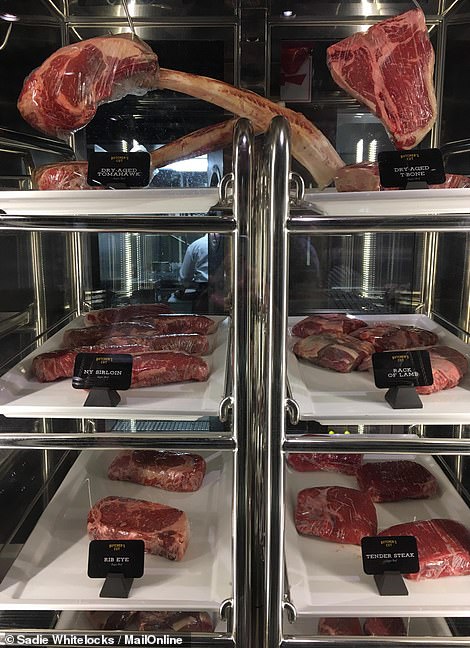 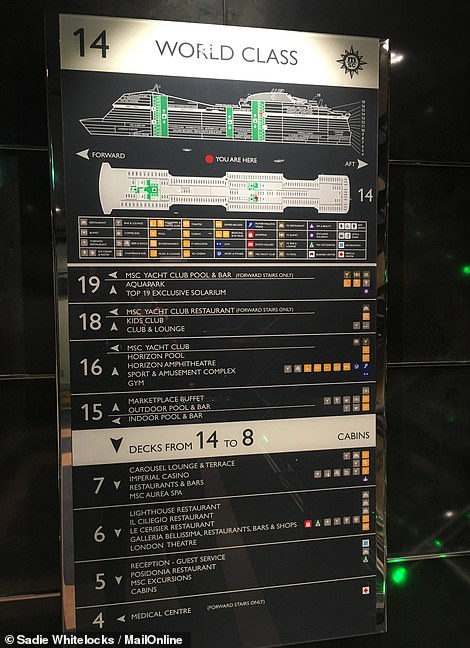 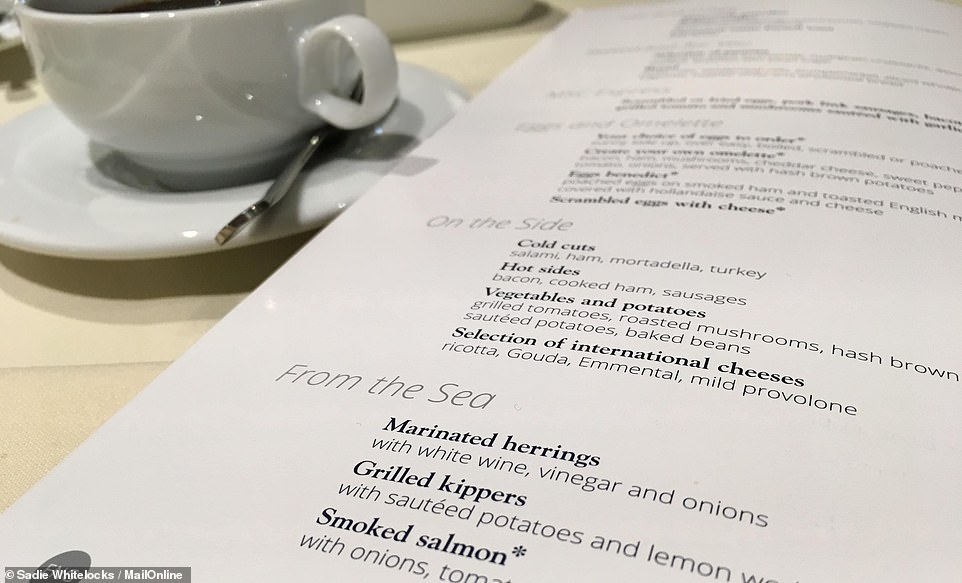 A photo of the a la carte breakfast menu in the Posidonia restaurant, which seats 604 passengers

It was hard to believe I was on a boat, with the spa akin to one you’d find inside a five star hotel.

The gourmet restaurants were other places where I forget I was at sea.

The French-inspired L’Atelier Bistrot felt like I could have been in some hip London spot with chic interiors and a charming barman who tried to get me indulge in the absinthe list.

Meanwhile, the Butcher’s Cut transported me to some kind of uptown New York steakhouse and the funky sushi place, complete with a tepanyaki grilling area, oozed the same kind of city chic.

Before I knew it, the day had dissolved away and we followed the same schedule as the night before, although dinner that night had been masterminded by culinary maestro Raymond Blanc.

MSC has teamed up with the British chef for him to create a signature dish that will be served on board. 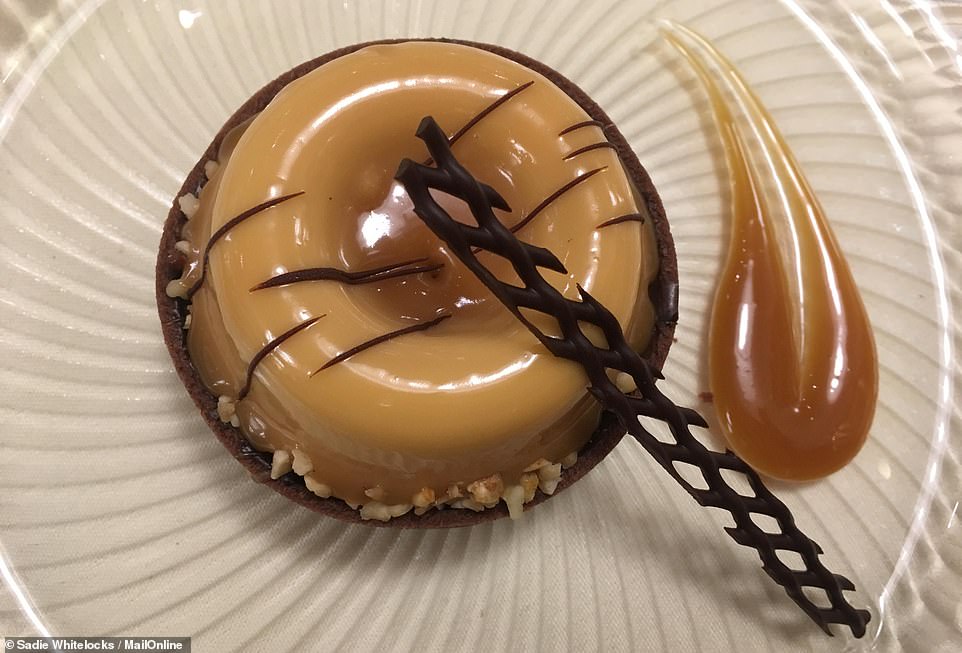 At dinner, Sadie said this slab of chocolate tonga bean tart proved to be very moreish 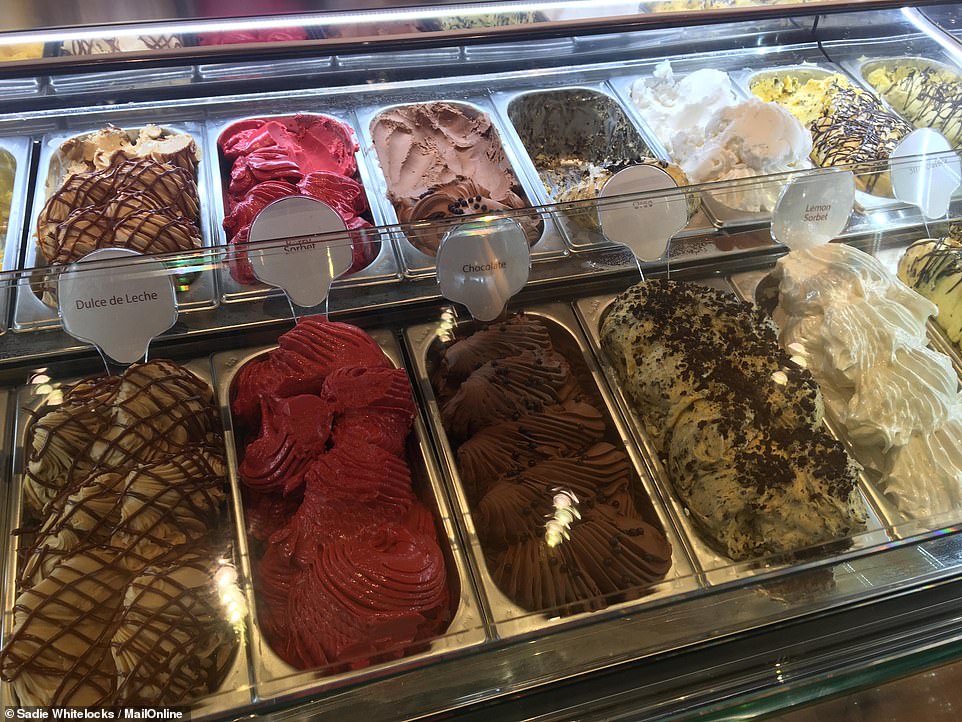 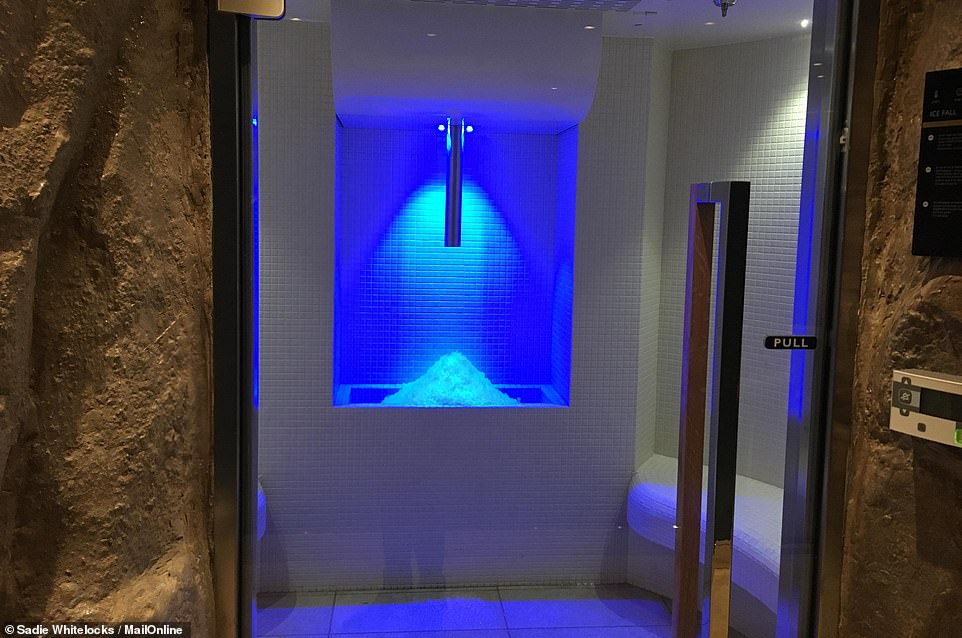 A view of the ice bath inside the ship’s spa, which Sadie said was akin to one you’d find inside a five star hotel

This is just one of the shipping firm’s many impressive collaborations, with a standout one being its unique partnership with Cirque du Soleil.

MSC Bellissima features a £20milloin stage that was custom built to enable Cirque to show its jaw-dropping shows at sea.

Unfortunately I never finished my dinner by Raymond Blanc, as service at dinner was pretty chaotic, as it was in other areas of the ship, so I ventured to the 20-hour buffet instead.

I realised that over the course two days we hadn’t even been anywhere and had remained in dock but it had been a surprisingly fun weekend away.

The MSC Bellissima wasn’t as scary as I initially thought.

I’m not sure if I’m a cruising convert but my trip on this 19-deck beast certainly got me thinking it’s not so bad after all.

All of that sparkle certainly starts to rub off.