An uber-chic spaceship has landed in Times Square.

Ok, so The Times Square Edition hotel isn’t a spaceship but its luxuriously chic guise is certainly alien to this thronging part of Manhattan where Sesame Street-costumed characters roam and harsh light from giant LED screens kill the mood.

Immediately on walking into the 42-storey, 452-room building I was transported away from the madness outside to a world of quiet calm. The drumming buskers and squawking tourists were gone. 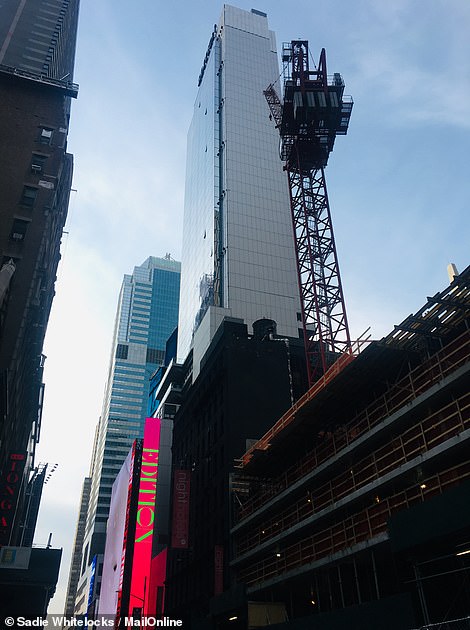 MailOnline’s Sadie Whitelocks joined a roster of writers, influencers and celebrities including Kendall Jenner (pictured left), to check out the The Times Square Edition (right)

I – along with a roster of writers, influencers and celebrities including Kendall Jenner, Cara Delevingne and Hailey Bieber – had been persuaded to hit this gaudy part of New York in a bid to check out the latest opening from famed hotelier and former Studio 54 co-owner Ian Schrager.

The five-star 516ft-tall Times Square Edition, which has been in the works for more than eight years, took shape as part of an $800million-plus development project. Schrager’s aim is to inject a bit of sexy and chic into Times Square.

I checked into the place during the initial launch week in March, with the place all abuzz. Diana Ross had performed the night before I arrived and more spectacles were on the agenda.

The ambitious hotel is the ninth launch by Shrager and Marriott International under the Edition brand and the second one in New York, with the other located in the more peaceful surrounds of Madison Square Park.

From the outside, passersby would hardly know the hotel is there with a fairly plain facade and giant doors keeping the innards under wraps.

On walking into the place after being greeted by two chirpy doormen I was immediately hit by the Shrager aesthetic. 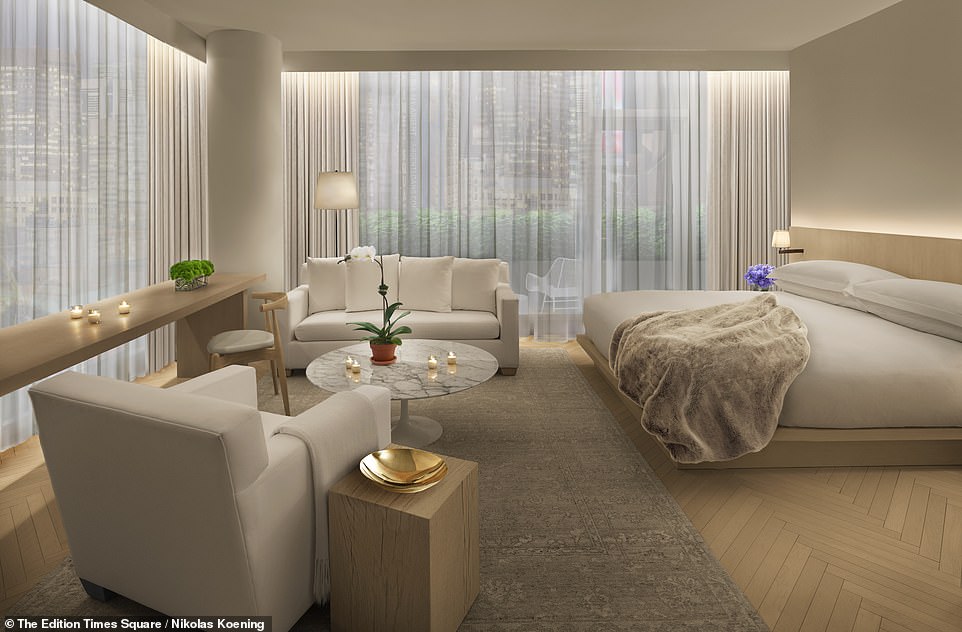 Stays at The Times Square Edition start from $295 (£228) with bookings made 14 days in advance. Above, one of the hotel’s balcony suites 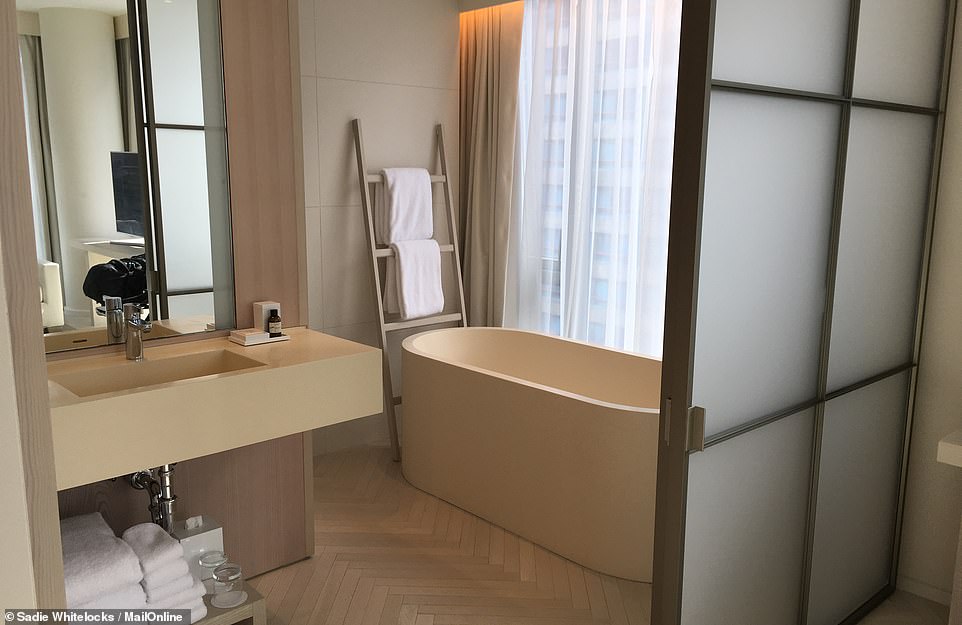 A view of Sadie’s bathroom, which has a deep tub and views, unsurprisingly, towards Times Square 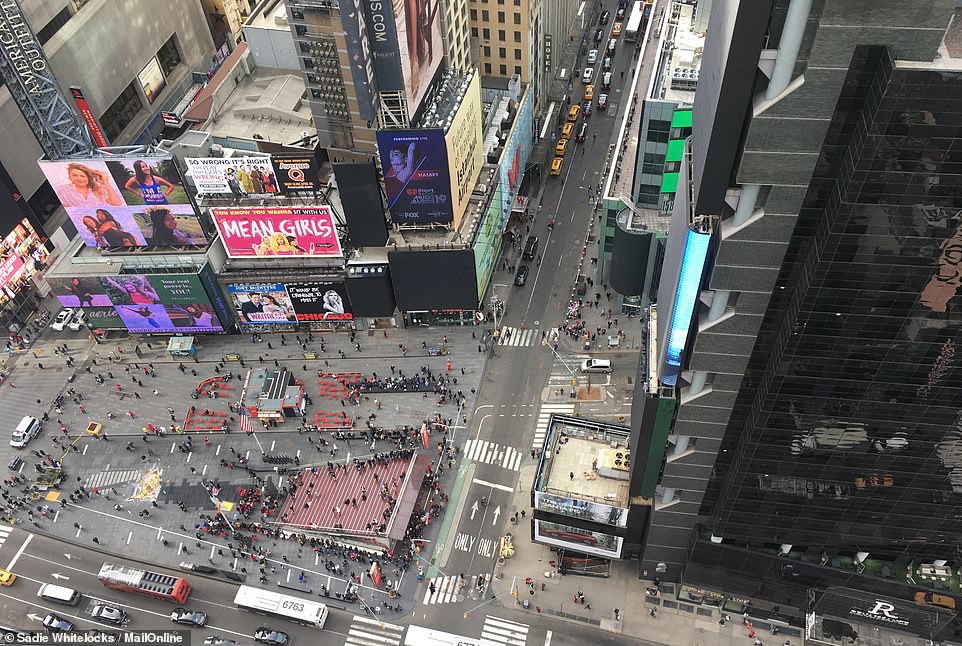 All of the Edition hotels – whether you’re in London, Shanghai or Hollywood – smell the same with a special air scent and bathroom products produced by hipster perfumer Le Labo.

This means fans of the boutique hotel brand are made to feel instantly at home no matter where they are in the world.

After making my way to the dark ebony-panelled tenth floor lobby area, I swiftly checked in with a friendly host and ventured to a different set of elevators to get to my room on the 17th floor.

I was booked into a corner balcony suite and on walking into the space I wish I’d had my sunglasses to hand.

In contrast to the shadowy lobby area, the bedrooms at the Times Square Edition are light and airy, with floor-to-ceiling windows and white furnishings exuding a cool Miami-style vibe.

My suite featured a central lounge and bedroom area, a bathroom complete with a rain shower and tub and a generous balcony looking down on the mayhem of Times Square below and the calmness of the Hudson River beyond. 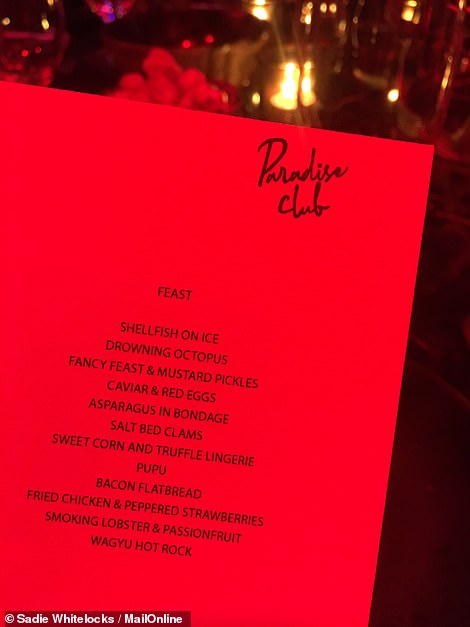 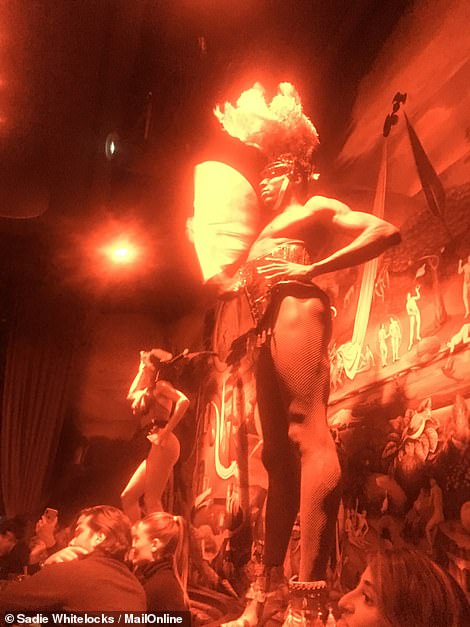 Sadie ventured to the cavernous Paradise Club on the seventh floor for the premiere of dinner show The Devouring: A Marriage of Heaven and Hell. Above, a menu from the night (left) and one of the scantily-clad performers (right) 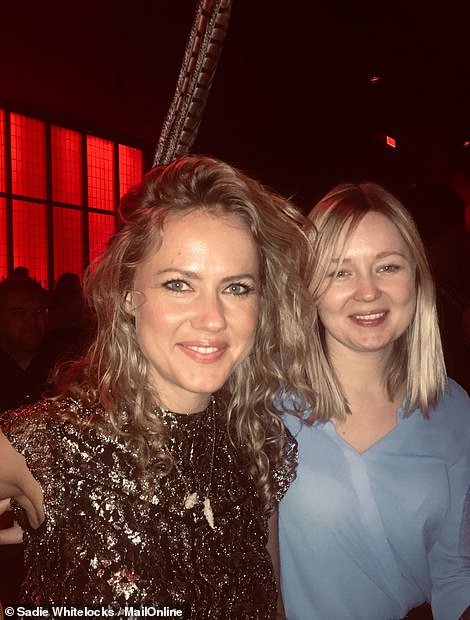 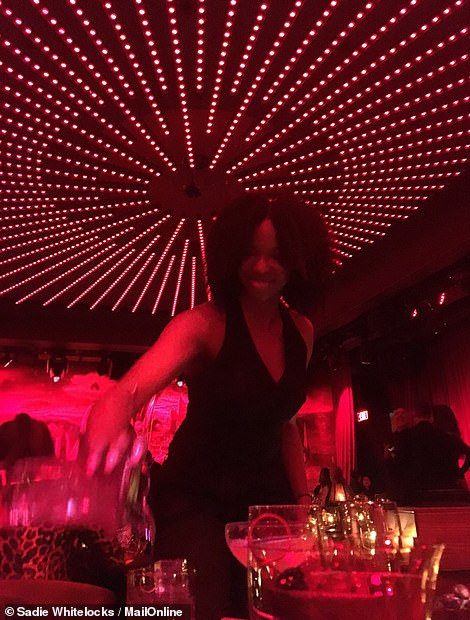 After a few punchy Manhattans whisked up by a cocktail cart-pushing waitress, Sadie (pictured far left with a friend) said her night ‘descended into a steamy haze’

The dressing gowns were lined with an exceedingly soft fabric, there was a steamer in the cupboard instead of an iron and the mini bar was stocked with a mix of quirky treats for purchase including mushroom jerky, sunglasses and a ‘temptation lover’s kit’. On the entertainment front, there was an easy-to-use Bluetooth speaker and large TV.

In a bid to shake off my jet lag after orientating myself, I made a swift costume change and ventured to the 24-hour fitness centre on the 14th floor.

Even if you’re not a fan of gyms this space could tempt you to break sweat, with a great mix of equipment, triple-height ceilings and floor-to-ceiling windows gazing out to the flashing LED screens outside.

After a quick workout, I zoomed back upstairs for a blissful soak in the deep bathtub, which came complete with the traditional Le Labo scented products and a welcome pot of bath salts.

From the tub I could spy pedestrians shuffling through Times Square and hear musicians busking to the masses.

Feeling a bit more in shape I headed downstairs for dinner.

The hotel’s Terrace Restaurant was open, but it was where I’d be having breakfast, so I ventured to the cavernous Paradise Club on the seventh floor for the premiere of the dinner show The Devouring: A Marriage of Heaven and Hell. 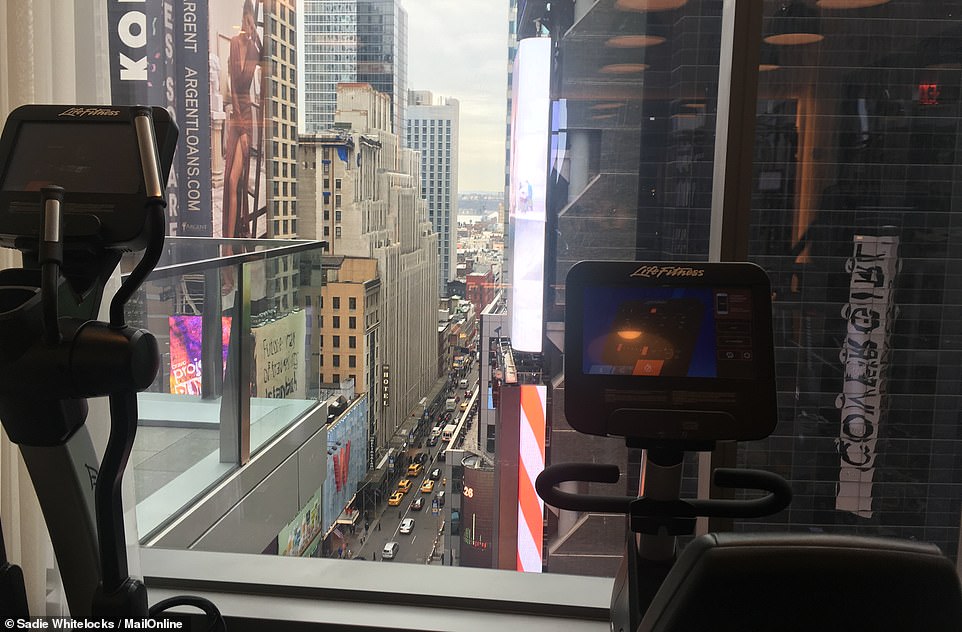 Even if you’re not a fan of gyms, Sadie says the 24-hour fitness centre could tempt you to break sweat, with a great mix of equipment, triple-height ceilings and floor-to-ceiling windows gazing out to flashing LED screens outside 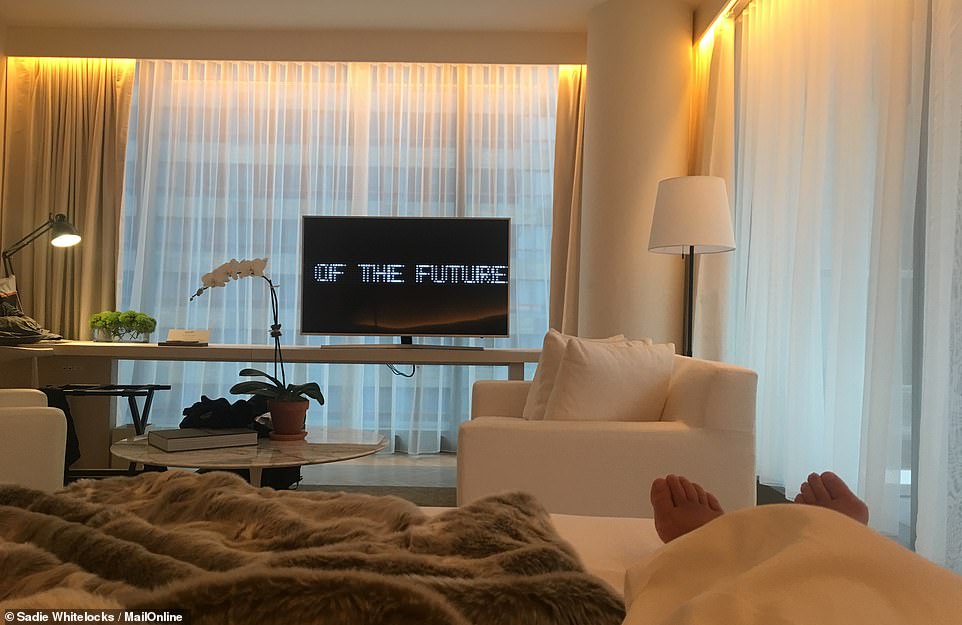 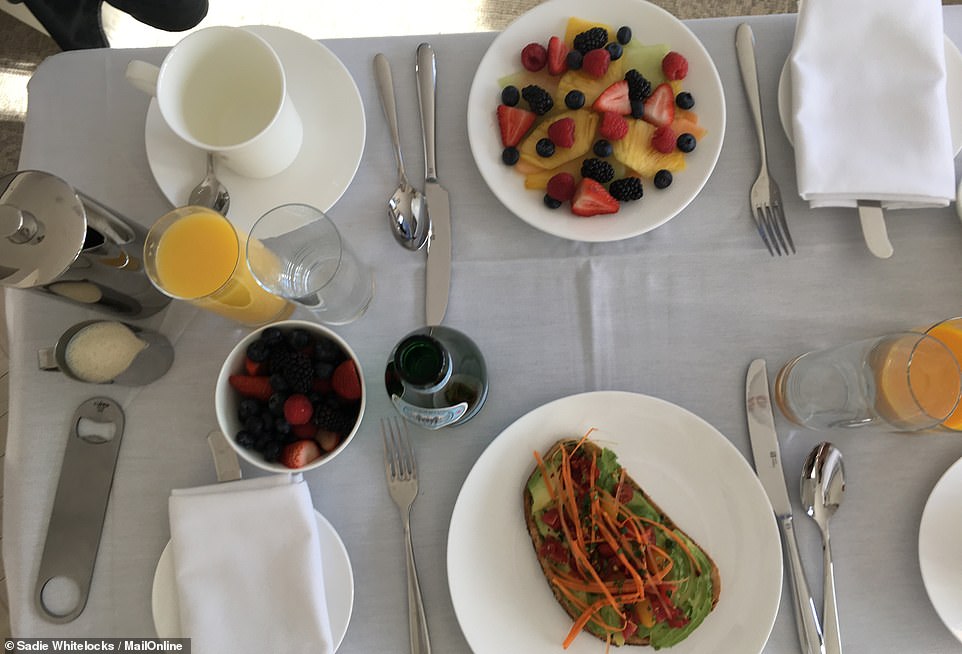 After a wild launch party, Sadie opted to have breakfast in bed, with avocado on toast and a strong coffee saving the day 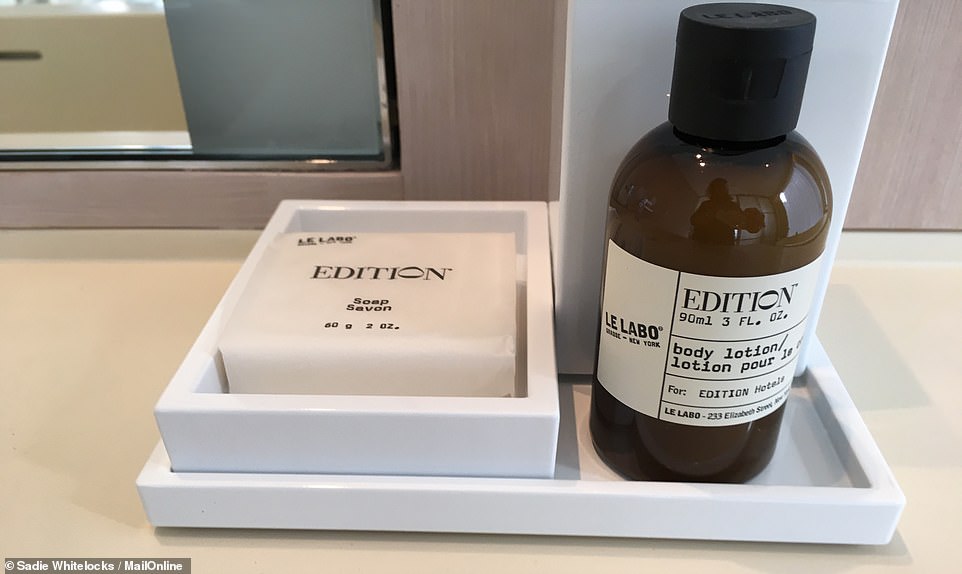 All of the Edition hotels – whether you’re in London, Shanghai or Hollywood – smell the same with a special air scent and bathroom products produced by hipster perfumer Le Labo 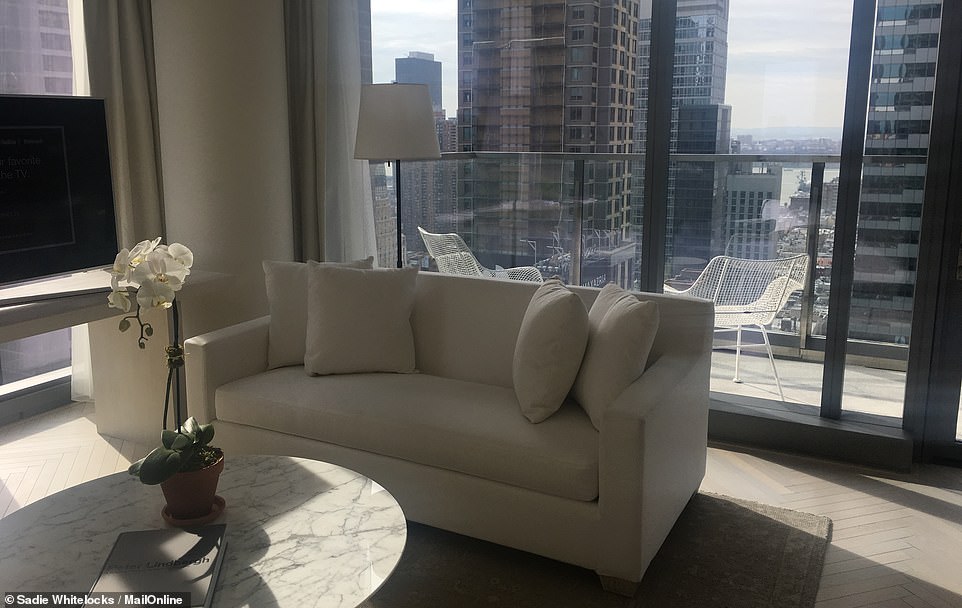 This performance promises to get your pulse racing with a rather obscure and saucy selection of food from John Fraser. Indeed our menu included ‘asparagus in bondage’ and ‘sweetcorn and truffle lingerie’, which kept our tongues guessing as we chewed.

We dabbled in the delicacies while scantily-clad men and women writhed on the booths behind us and flexible dancers dazzled on the stage as they showcased acts ‘inspired by the poetic texts of William Blake and his work The Marriage of Heaven and Hell’.

After a few punchy Manhattans whisked up by a cocktail cart-pushing waitress the night descended into a steamy haze. There was dancing after the show until the early hours and I finally rolled upstairs to bed.

In the morning, feeling a little glassy-eyed, I opted for room service over breakfast in The Terrace Restaurant with the delicious avocado toast and punchy coffee making me feel a little more human.

That day I followed pretty much the same routine with a journey to the gym and the dinner show swapped out by a stellar performance by Fugees rapper Lauryn Hill, which created yet more buzz around the lofty Times Square property.

The bouncers were once again kept on their toes and my glassy eyes returned the next morning. 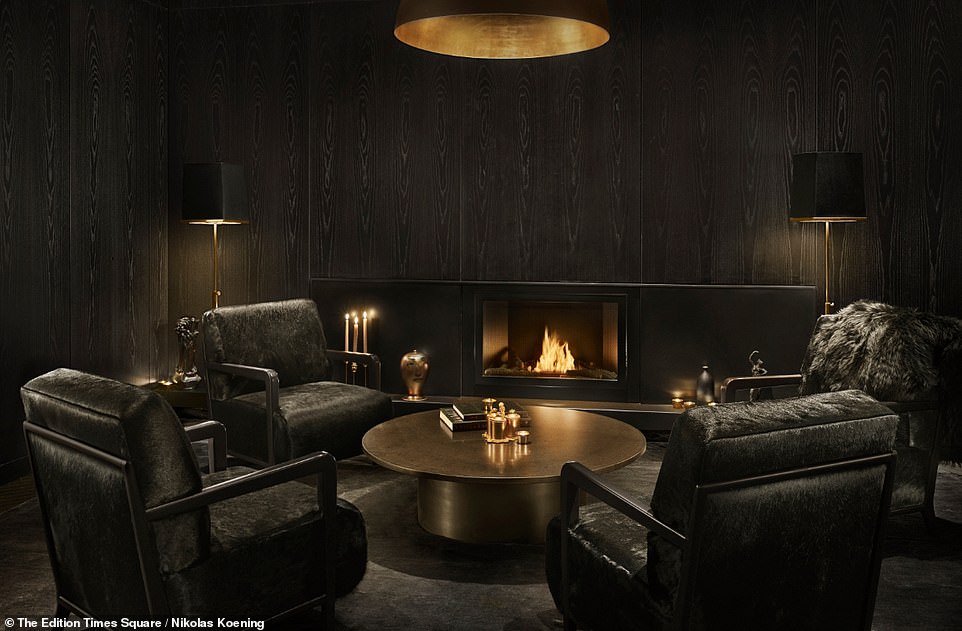 The bar area of the lobby, complete with an open fireplace and low lighting 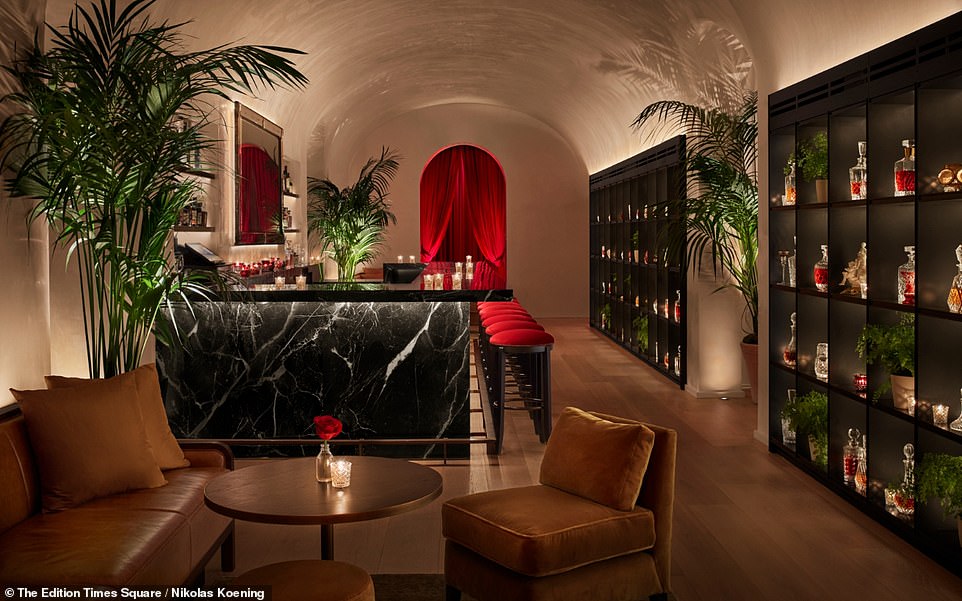 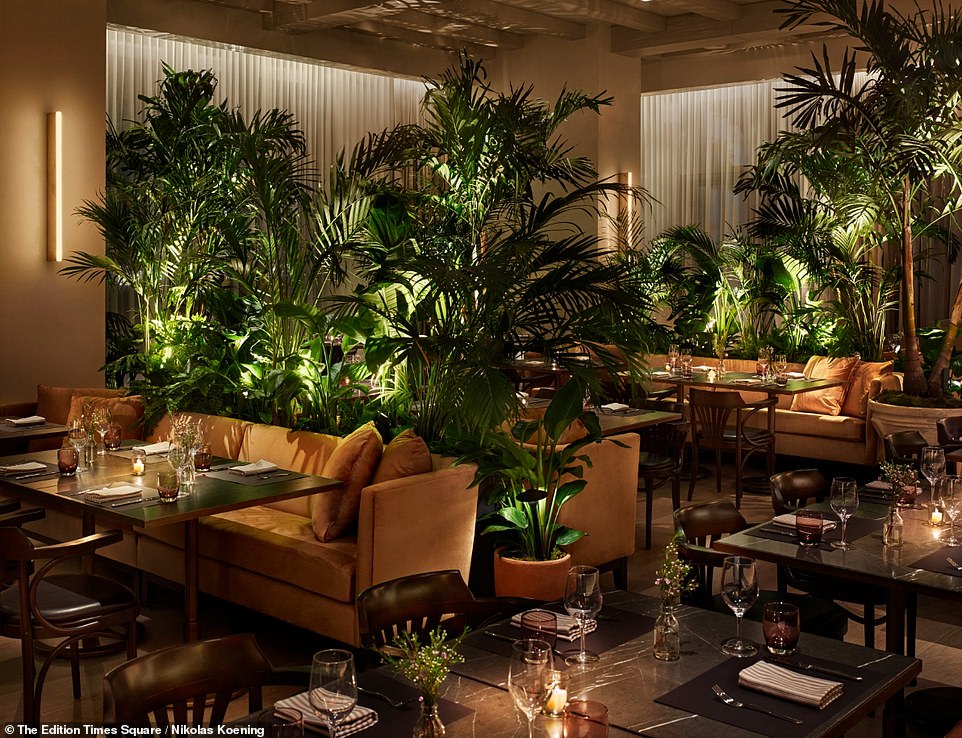 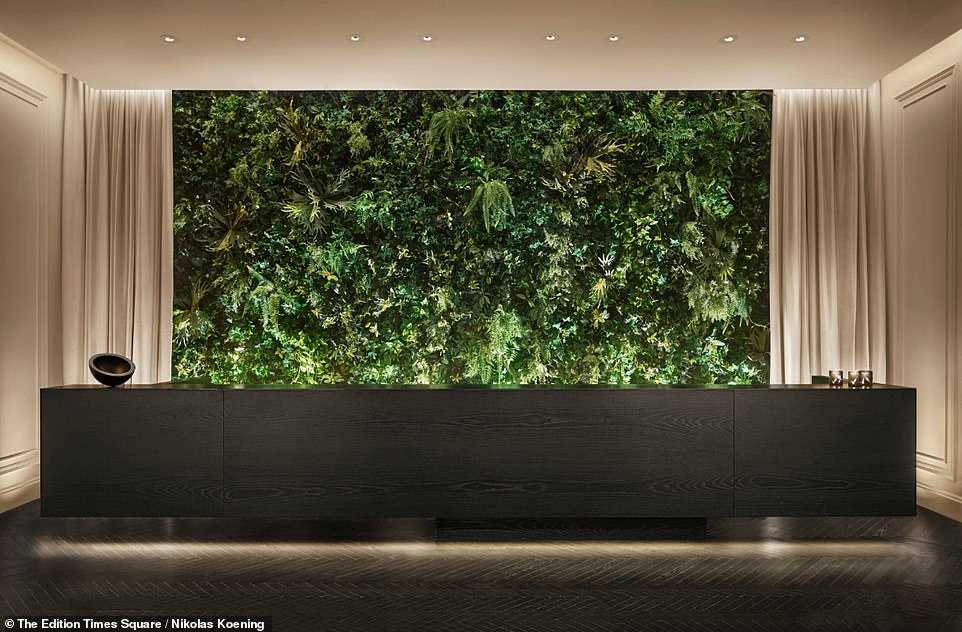 The reception desk at the hotel is located on the 8th floor, with a bar area and work space next door 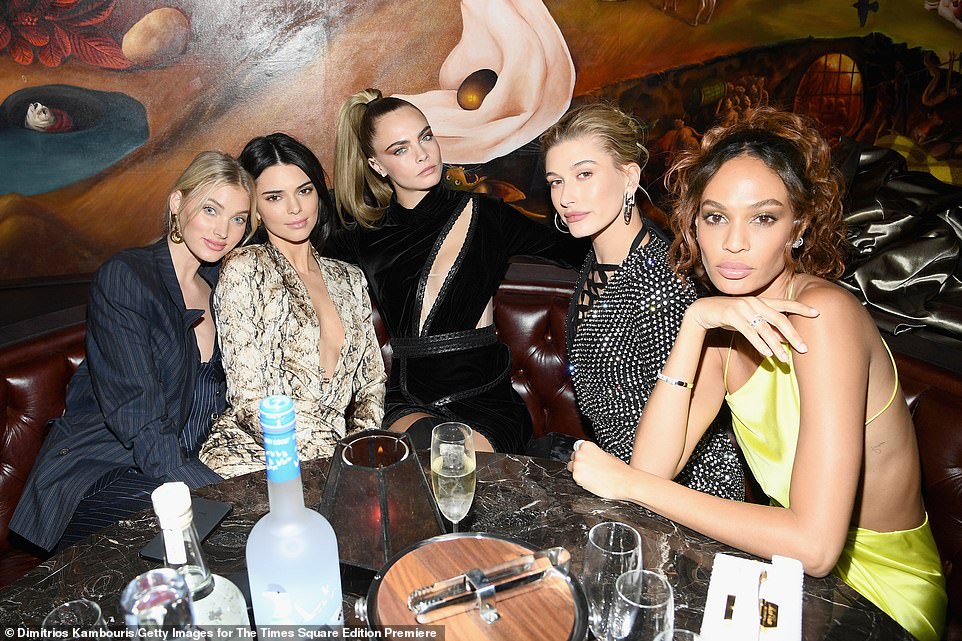 After a few days in The Times Square Edition I felt something of a willing prisoner in the place.

There was nothing urging me to explore the chaos outside and I stayed cocooned in my heavenly room with brief interludes out on the balcony for fresh air before the deafening noise caused me to retreat once again.

I felt like the scent of the Edition’s Le Labo was oozing out of my pores after several more soaks in the bath and a mild headache ensued.

Overall, this place is an extremely cool basecamp to explore the city, especially for newbies to New York.

Only time will tell if this was just a brief fling for Manhattan’s cool kids following the well-orchestrated launch (Page Six reported that Kylie Jenner, Cara Delevingne,and Hailey Bieber each got paid at least $250,000/£195,000 to attend the hotel’s opening night and check in as guests) or if it will be a blossoming love affair.

For me Times Square is not my spot but I had certainly been seduced by the Edition and its slick guise.

I left the place with that omnipresent Le Labo scent serving as a reminder of my pretty pleasant mid-town rendezvous.

Flights with British Airways run daily from London to New York from £298.

Stays at The Times Square Edition start from $295 with bookings made 14 days in advance.

To book a dinner show at the hotel’s Paradise Club or for weekend entry visit www.eventbrite.com.

For more information on things to explore while staying in New York visit www.nycgo.com.