The United States’ most popular left-leaning publications and news networks – including The New York Times, Washington Post, CNN and MSNBC – have made no mention of the story in the 36 hours since it was broken by the Post, and confirmed by DailyMail.com

On Wednesday evening, CNN host Jake Tapper did mention Hunter on his show – but only while discussing the president’s son’s paintings with Republican writer Kristin Soltis Anderson.

Soltis Anderson blasted Biden for cashing in on his dad’s name, and selling his artworks to anonymous buyers. But no mention was made of Biden’s alleged payment to the sex worker with his dad’s plastic.

This isn’t the first time mainstream media outlets ignored controversy surrounding the president’s son. They previously blanked a June 7 DailyMail.com exclusive about Hunter using the n-word, and have faced hypocrisy claims after running multiple stories on the alleged wrongdoing of Donald Trump’s children while he was president.

Liberal media outlets in the US are facing backlash for completely ignoring Hunter Biden’s prostitution scandal. The New York Times has not mentioned the story. Wednesday’s edition is pictured 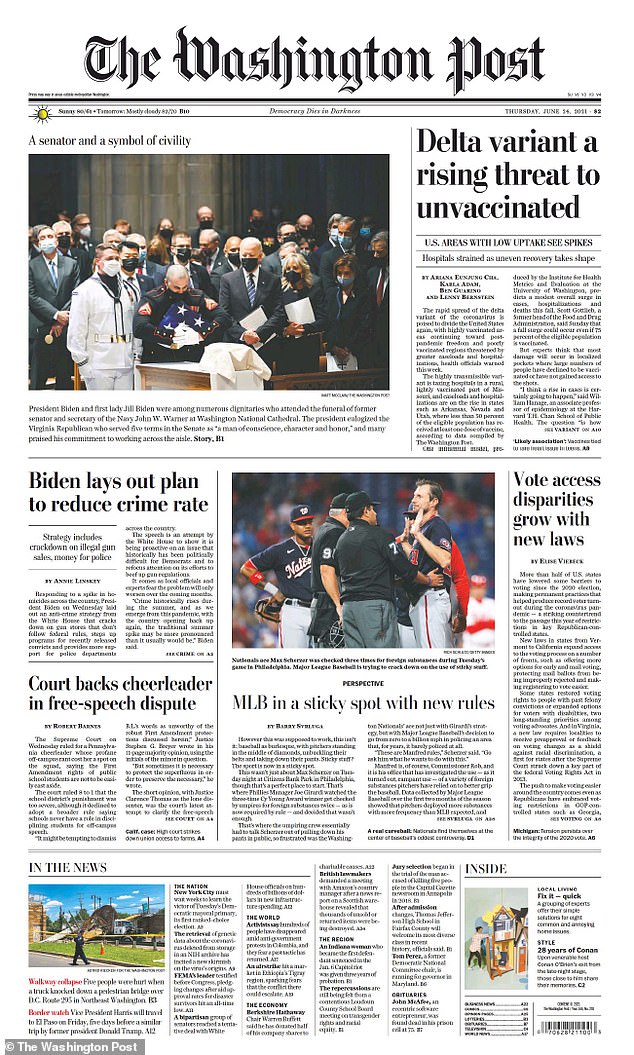 Thursday’s Washington Post, which has also avoided mentioning the latest Hunter Biden scandal, despite being the White House hometown paper 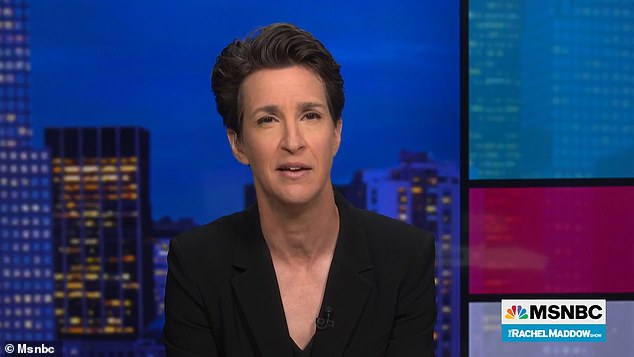 Rachel Maddow, of MSNBC, made no mention on her show last evening about claims Hunter inadvertently used his father’s credit card to pay an escort $25,000 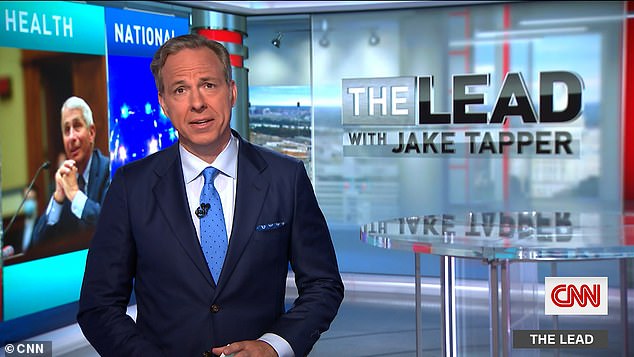 Jake Tapper, of CNN, mentioned Hunter in the context of another story about him selling his art to unnamed bidders – but did not reference the credit card story 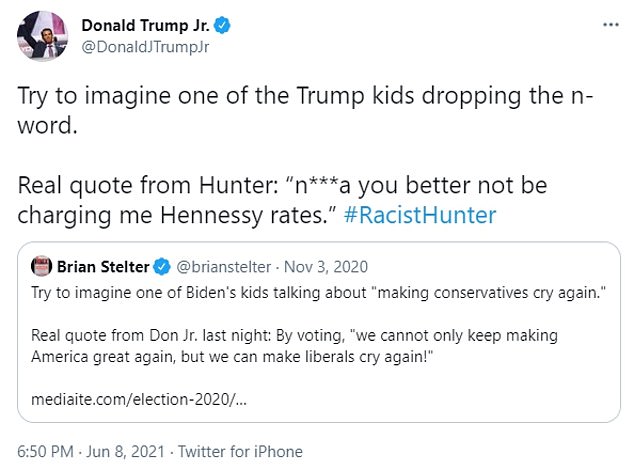 Mainstream media outlets previously ignored a June 7 DailyMail.com exclusive about Hunter using the n-word. Donald Trump Jr. tweeted about the double standards that would arise if it had been one of Donald’s children

When the n-word story broke, Donald Trump Jr. tweeted that coverage would have looked far different if it involved someone in the Trump family. ‘Try to imagine one of the Trump kids dropping the n-word,’ he tweeted.

This week, CNN have run a story about Ivanka and Jared Trump distancing themselves from Ivanka’s dad, as well as a follow-up analysis of that claim.

The story about Hunter using his father’s credit card for sex with a prostitute was covered numerous times on Fox News – including on shows hosted by the network’s most popular stars Tucker Carlson and Sean Hannity.

But CNN did not mention the credit card story, and MNSBC avoided it altogether.

The lack of coverage has prompted outrage among conservatives with many taking to Twitter to accuse the liberal media of double standards.

Michael Champlain referenced a video from the incident in which Hunter balances a line of M&Ms on his penis, which was documented in files stored on the laptop. He wrote, ‘Remember when they told you that President Trump’s children lacked morals because they operated businesses? What are they going to say about Hunter balancing M&Ms on his erect penis for a prostitute?’

Another user called OddBiff wrote, ‘Too funny…So receipts and texts show Hunter Biden spent thousands on President Biden’s credit card for prostitutes .. Was shocked the news is not saying it was Ivanka Trump he paid just to smear her.’

Stacy Herbert called out MSNBC for not providing any coverage of the scandal, writing, ‘Unlikely that Maddow, who had been so eager to air the Trump pee tape, will be airing any of the contents of the m&m’s on penis photos.’

And a Twitter user named Punished Donut wrote, ‘Hunter Biden could shoot someone in the street in broad daylight and you’d still bring up Trump.’

Meanwhile, only more conservative-leaning media have unraveled the story about a series of wild nights that Joe Biden may have accidentally paid for his son Hunter to have with a prostitute in 2018.

It was early May that year when Hunter Biden ordered Yanna, an escort, who billed herself as ‘Russian, Green Eyes, Thin Brunette, an elite courtesan’ from his favorite site, Emerald Fantasy Girls, according to files obtained by the New York Post from his 2017 Macbook Pro.

‘Hi, My name is Rob.’ he texted the woman on May 7, 2018, using his first name, Robert, before telling her he was staying at The Jeremy Hotel, ‘Are you available now?’

Hotel bills show Hunter then moved to a $470-per-night room at The Jeremy in West Hollywood later that month, where he hired another escort while under the protection of two recently retired Secret Service agents.

And messages saved on the laptop show Joe Biden might have inadvertently been the person actually paying the bill for the wild week, according to the messages obtained by the Post. 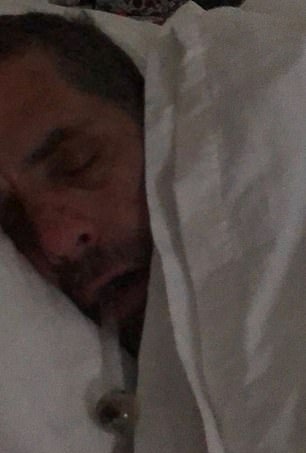 First son Hunter Biden (left and right, with a pipe) may have inadvertently spent his fathers funds on an escort at LA hotel The Jeremy, according to text messages and receipts, when he was overcharged nearly $25,000 for the services, the Post reports 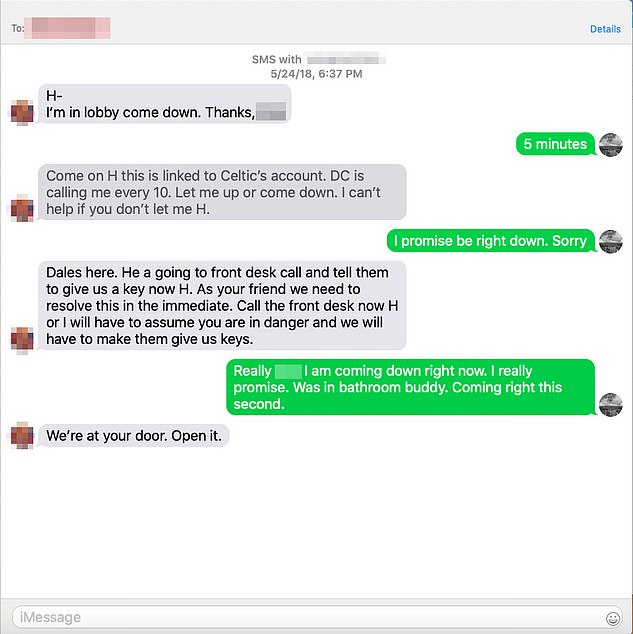 As for the 2018 tryst at The Jeremy, the Post reports that on the Morning of May 24, Hunter added a woman named Gulnora, a registered agent for Emerald Fantasy Girls, as a recipient on the cash transfer app Zelle, and attempted to wire her the money.

But his card didn’t work, and Wells Fargo sent him a fraud warning alert.

He tried another card, and then another before the $8,000 charge finally went through.

Throughout the morning, however, the transactions he thought had failed started to clear, meaning he was overcharged.

The first $8,000 left his account at 10.22am, according to receipts from the laptop viewed by the Post.

In total roughly $25,000 is transferred in less than an hour, according to the Post.

‘There is many transactions on my account,’ Yanna would soon text him, according to the Post. ‘From last night 8k, 8k, 3500k. So get back with me when you can. So I can transfer back to you. Better if you call my personal.’

‘I’m happy to see that much in my account.’ she texts again. ‘No worries you can have the rest back. Karma is a b***h.’

‘Send it back please.’ Hunter replies at 4.19pm, according to the Post.

A little more than two hours later, however, he would be receiving texts from a very different person.

Labelled as from Robert Savage III, a former Secret Service agent who until that month had been in charge of the agency’s Los Angeles field office, the Post reports, he texts him at 6.37pm: ‘H – I’m in the lobby come down. Thanks, Rob.’

Savage’s attorney told the Post that he had never been in contact with Hunter Biden, and said that he was retired before the exchange took place. He referred to the messages as ‘fabricated text messages.’

‘Come on H, this is linked to Celtic’s account,’ Savage replied five minutes later, using the Secret Service code name for Joe Biden when he was vice president, the Post reported. ‘DC is calling me every 10. Let me up or come down. I can’t help if you don’t let me H.’

It’s not clear which if any of the accounts Hunter used to pay for Yanna may have been linked to his father – although Celtic was a codename used for his dad.

‘I promise be right down. Sorry.’ Hunter answers.

Another five minutes goes by and Savage warns him that Dale Pupillo, also retired from the Secret Service, and who served as the agency’s assistant director, had shown up, the Post reports.

Invoices on the laptop show that Pupillo vetted potential business partners for Hunter.

‘He’s going to front desk, call and tell them to give us a key now H,’ Savage texts. ‘As your friend, we need to resolve this in the immediate.’

‘Call the front desk now H or I will have to assume you are in danger and we will have to make them give us the keys.’ Savage continues.

‘Really, Rob I am coming down right now,’ Hunter replies nine minutes later. ‘I really promise. Was in the bathroom buddy. Coming right this second.’

‘We’re at your door. Open it,’ comes a quick reply from Savage.

The exchange ends there, but further records on the laptop indicate Hunter spent the rest of the evening on an encrypted site, ‘secure.login.gov’ until 4.04am, according to the Post.

Further texts and receipts on the laptop indicate that all but $5,000 of the extra charges for Yanna’s visit were returned, with Gulnora texting Hunter that she was having trouble with her bank account.

A number of Hunter’s other escapades have been chronicled on files recovered from the laptop.

Biden had stayed in LA for an ‘undetermined amount of time’ in 2018, following his divorce from Kathleen Buhle and during an extended period of drug use he chronicled in his memoir ‘Beautiful Things.’ 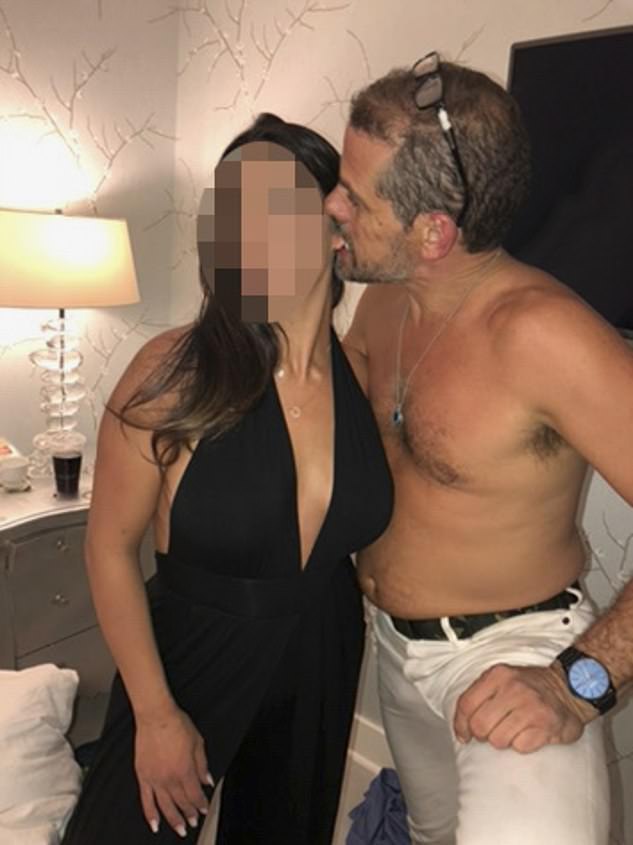 Leaked emails and photos obtained by DailyMail.com from Hunter’s laptop reveal he was desperate to avoid going to jail for unpaid taxes after blowing tens of thousands of dollars on luxury cars, prostitutes, drugs and designer clothing 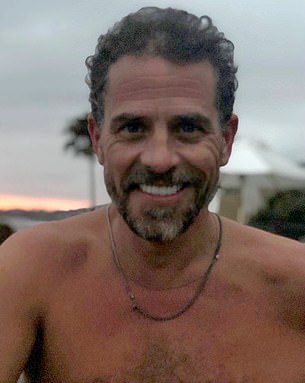 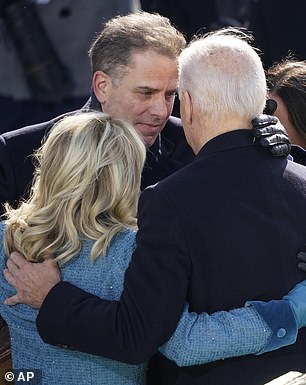 Hunter, the son of President Joe Biden (with him in January, right) has long struggled with drugs, and spent much of 2018 at the Marmont, where he invited the escort

In 2016, he allegedly dropped off a rental car in Prescott, Arizona, leaving behind a crack pipe and white powder, his driver’s license and his late brother Beau’s attorney general badge.

And in April, DailyMail.com reported that he had stayed in a third-floor suite of The Jeremy Hotel in Los Angeles for a week, ordering room service each night, drinking at the hotel bar and racking up a $5,195 bill, including a $400 fine for smoking in his room.

During the stay, he also sought refills for prescriptions of a generic equivalent to Viagra called Sildenafil, the antidepressant Lexapro and anxiety medication clonazepam.

He had also texted his father, now President Joe Biden, about his struggles and the president had offered to pay for his grandchildren’s medical care when Hunter ran out of money.