John Major rushed out the news that the Queen had agreed to pay income tax to deflect criticism of the royals, the files reveal.

The then prime minister made the news public as Her Majesty was rocked by her ‘annus horribilis’ of 1992.

During the year, the collapse of Prince Charles and Princess Diana’s marriage was revealed in Andrew Morton’s book ‘Diana: Her True Story’, while the Duke and Duchess of York announced their separation and Princess Anne divorced her husband Captain Mark Phillips.

John Major rushed out the news that the Queen had agreed to pay income tax to deflect criticism of the royals, files reveal

A fire also caused extensive damage to Windsor Castle, prompting an outcry when it was suggested that the estimated £60 million repair bill be met by the taxpayer.

The scrutiny prompted growing concern about the effect the ‘intrusive and intolerable’ media coverage was having.

Mr Major told the Cabinet that the Queen, who was not subject to taxation, asked him to come up with an arrangement for her to pay tax.

The announcement was due within weeks, but Mr Major speeded up the process to end media criticism of the Queen.

On November 26, Mr Major finally revealed to the Cabinet the Queen, who was not subject to taxation, had asked him some months earlier to ‘consider arrangements by which she could pay the equivalent of income tax on her private income’. 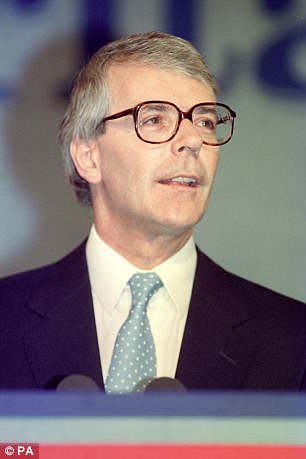 Mr Major told the Cabinet that the Queen, who was not subject to taxation, asked him to come up with an arrangement for her to pay tax

The Prince of Wales, he said, had made a similar offer in relation to his income from the Duchy of Cornwall.

A team of officials had been quietly working on the plan, and Mr Major told ministers that he had intended to make announcement in a few weeks, when the exercise was complete.

However, the cabinet minutes noted: ‘In the light of recent unjustified media criticism of the Queen’s taxation position and after discussion with Her Majesty, he had decided to tell Parliament later that day that these discussions were taking place and also that the Queen proposed to take on some Civil List payments.’

In the discussion that followed, ministers agreed the move was ‘most welcome’ and should put a stop to one of the major sources of criticism of the royal family.

The minutes added: ‘On the other hand, this gesture would not by itself change the behaviour of the media and some would represent it as resulting from their pressure.

‘The Government should reinforce the Queen’s initiative by strong expressions of support for the institution of the monarchy.’