When Tina Rahimi wandered into a gym in the western Sydney suburb of Bankstown in 2017 she had no idea her life was about to be transformed.

Fast-forward to 2022 and Rahimi has qualified for both the International Boxing Association Women’s World Championships in May and the Birmingham Commonwealth Games in July, making her the first Muslim woman to lace up the gloves and represent Australia.

‘Never take your eyes off the target’: Rahimi is an inspiration in and out of the ring

They’re enormous accomplishments, but Rahimi never had a shred of doubt that she would make it.

‘I love it, I love the aggression of it, I just love everything about it,’ the former makeup artist from Bankstown said.

‘My mindset is I like to always stay ready for a fight. I’m not afraid to get hurt at all.

‘The whole point of boxing is to be smart. To hit and not get hit.

‘It’s not like pain that would make you want to give up. It actually motivates me even more, to be honest.

‘If I get hit hard, you want to come back with a bigger shot. All the time.’

‘I’ve always embraced the physicality. I was never scared to get hit. I even sparred with the boys and I’d get hit by a punch and still come forward.’

It all started when Rahimi walked into her cousin’s gym in 2017, looking for a way to keep fit. She had her first bout in 2018 and now her cousin and coach Muhummad Alyatim says they have to change the locks to keep her out of the joint.

‘I felt that she would be good for the gym, a great role model for the females especially in physical sport. To carry themselves to be strong and physically fit,’ he said.

‘Tina has great discipline. We’re trying to change the locks to keep her out of the gym, that’s the discipline that she has towards her training. 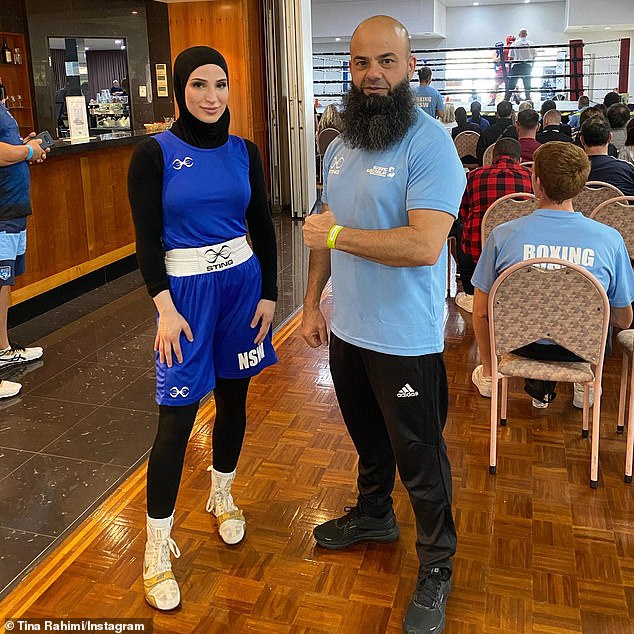 Today, Rahimi is a role model for her entire community.

She has started the Boxing With Tina class and Instagram account to inspire more women, children and people of the Muslim faith to take up the sport.

She trains them, inspires them and celebrates both her faith and her love of boxing at the same time.

‘I have a lot of faith in God,’ Rahimi said.

‘As a Muslim, we are required to pray five times a day. It gives me the comfort knowing that I’ve spoken to God and I know that he will make me victorious.’ 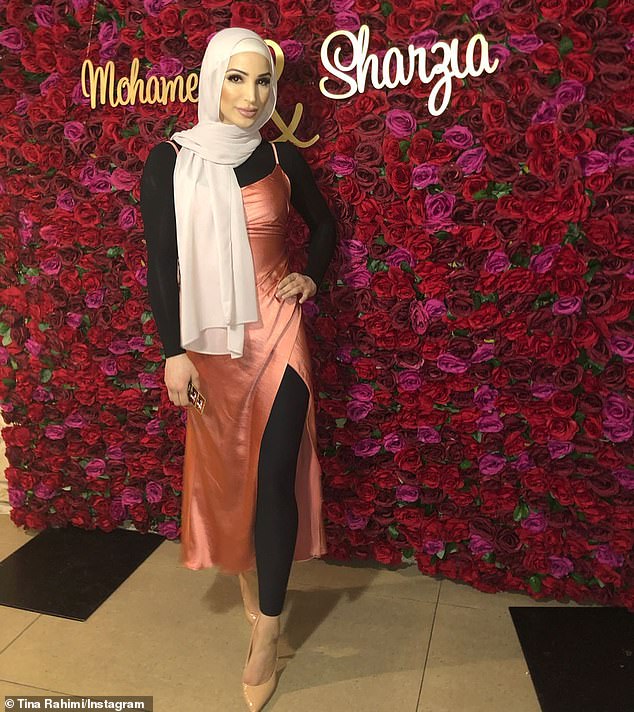 Rahimi is glamourous and dangerous, with her sights set on Commonwealth Games glory

It was not a hobby or career path that Tina’s mother thought her little girl would fall into.

‘I never thought she was going to be a boxer,’ she said.

‘I was really surprised and scared. I said Tina, ‘Why are you choosing boxing? It’s very dangerous and I don’t want somebody to hit you.”

Tina was determined to prove that strength from a very early age.

‘She used to arm wrestle everyone, the whole family, the friend group, literally everyone,’ her sister laughed.

Tina has a softer side, too. While her makeup business might play second fiddle to her boxing now, it is still very much a part of her life.

‘I don’t like to use too much makeup, it is all about enhancing one’s natural beauty.’ 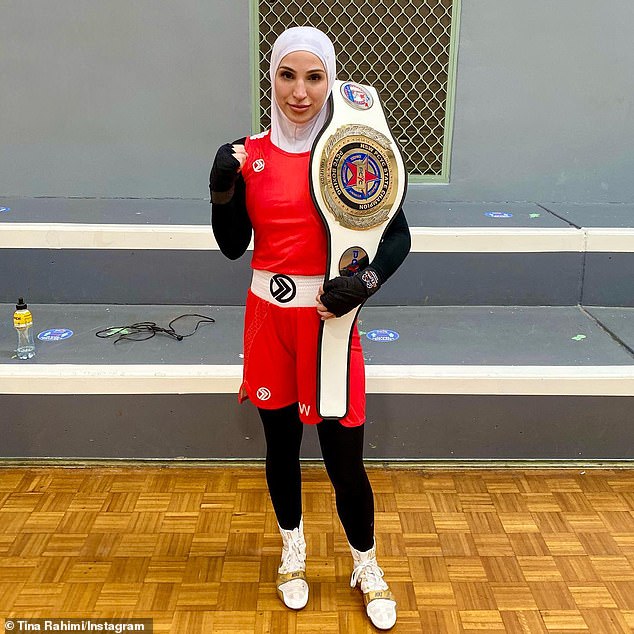 But for Tina, the real beauty comes from outsmarting her opponents in the ring.

‘It’s just about what they do and then you come back and do it better. It’s about studying them and seeing how they do they something and how you can come back and beat them to it, reacting faster and better.

‘See how beautiful it is? It’s not about hurting them, it’s about thinking with your brain as well.’