Malala Yousafzai in Pakistan for 1st time since she was…

Nobel Peace Prize winner Malala Yousafzai has returned to Pakistan for the first time since she was shot in 2012 by Taliban militants.

The activist will meet the country’s prime minister Shahid Khaqan Abbasi today although the exact reason for her trip has not been revealed, with officials saying the details of the visit are being kept secret ‘in view of the sensitivity’.

Malala was shot in the head on a schoolbus in her hometown of Swat aged just 14 by a gunman outraged by her campaigning for female education in the country.

The 20-year-old, who studies at Oxford University, was surrounded by tight security as she arrived at Pakistan’s Benazir Bhutto International Airport.

Malala pictured at the World Economic Forum in Davos, Switzerland, earlier this year

Local television showed her with her parents in the lounge at the airport before leaving in a convoy of nearly 15 vehicles, many of them occupied by heavily armed police.

Her return to Pakistan has been shrouded in secrecy and it wasn’t immediately clear how long she would be in Islamabad or whether she planned to go back to her hometown.

During the 2012 attack, the Taliban gunman boarded her school van and demanded to know ‘who is Malala?’ before shooting her in the head.

Two of her classmates were also injured. In critical condition, Yousafzai was flown to the garrison city of Rawalpindi before being airlifted to Birmingham in Britain for emergency treatment.

She spent weeks at Queen Elizabeth Hospital but made a full recovery, with her family relocating to the area. 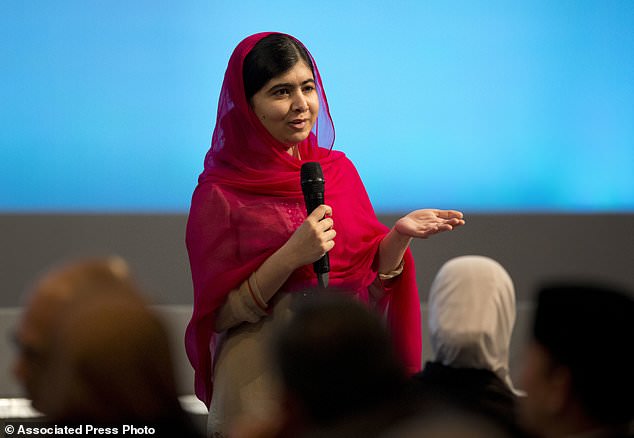 Since then she has spoken at the United Nations and continued her advocacy for universal female education by setting up the Malala Fund charity and releasing a book.

She was awarded the Nobel Prize in 2014, along with Indian child-rights activist Kailash Satyarthi, and said on the day she collected it said that ‘education is one of the blessings of life, and one of its necessities.’

But at home in Pakistan, she has been condemned by some as a ‘Western mouthpiece’ with some even suggesting on social media that the shooting was staged.

Previously when speaking in public she has championed her home country and spoken in her native Pashto language, always promising to return to her home.

On March 23 when Pakistan celebrated Pakistan Day, Yousafzai tweeted, ‘I cherish fond memories of home, of playing cricket on rooftops and singing the national anthem in school. Happy Pakistan Day!’

Local television channels have been showing her return to Pakistan with some replaying the horror of her shooting and the rush to get her treatment.