Malaysian cinema ‘is covered in mould’ after two-month coronavirus lockdown

A Malaysian cinema appears to have become covered in mould after two months of coronavirus lockdown which has already ravaged its leather goods retailers.

The cinema’s purple and red seats and its carpets had been wrecked by a thick layer of mould and dust, according to the photographer in the city of Ipoh in western Perak state.

With 6,742 cases and 109 deaths, Malaysia eased movement curbs earlier this month but has kept tight restrictions on several areas where there have been new outbreaks of the COVID-19 disease.

The impacts of the strict measures were seen earlier this week on the mouldy leather bags and shoes when cleaners arrived at a shopping mall in Sabah state on the island of Borneo. 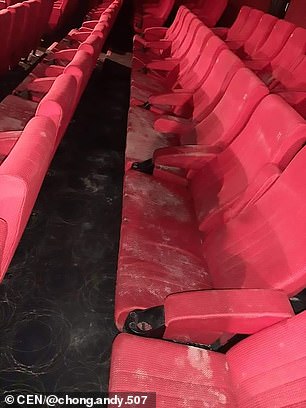 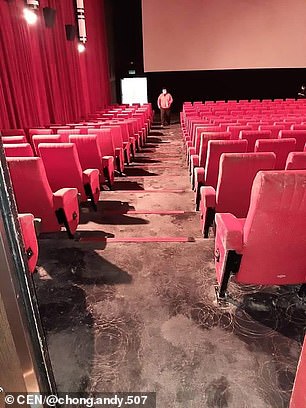 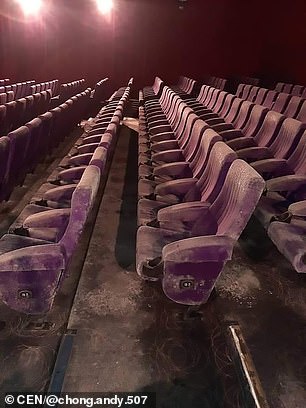 Fortunately for the country’s cinemas they will be able to have a deep clean or replace their seats, but for retailers, much of their expensive stock has had to be disposed of.

Indeed, one Malaysian Twitter user remarked: ‘This is actually a good thing for places like cinemas. Finally they can start a full cleanup after 10 years of disgusting filth and dust, time to say goodbye to the cockroaches.’

One of the bags pictured in Sabah on Monday had a price tag of £126 (679 MYR) and had been totally ruined by the mould.

Many of those commenting on social media said this was the result of shoddy air conditioning and poor maintenance by the store owners.

The Metrojaya centre in Sabah, Malaysia, was given a deep clean when staff returned to the building on Sunday. 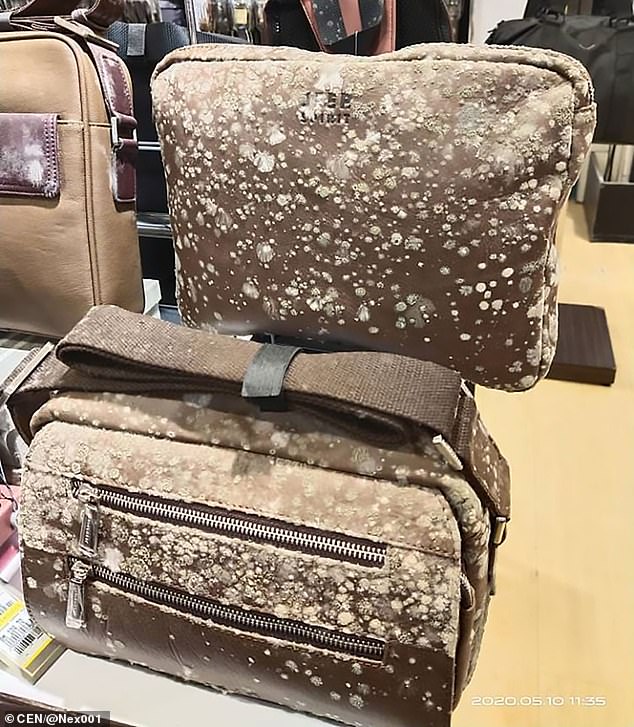 Pictured: Leather bags look studded with mould after employees shut up shop due to the coronavirus crisis two months ago 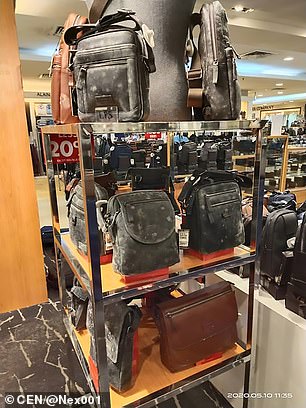 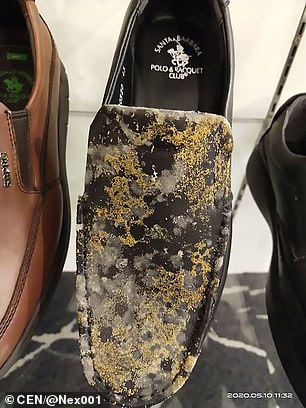 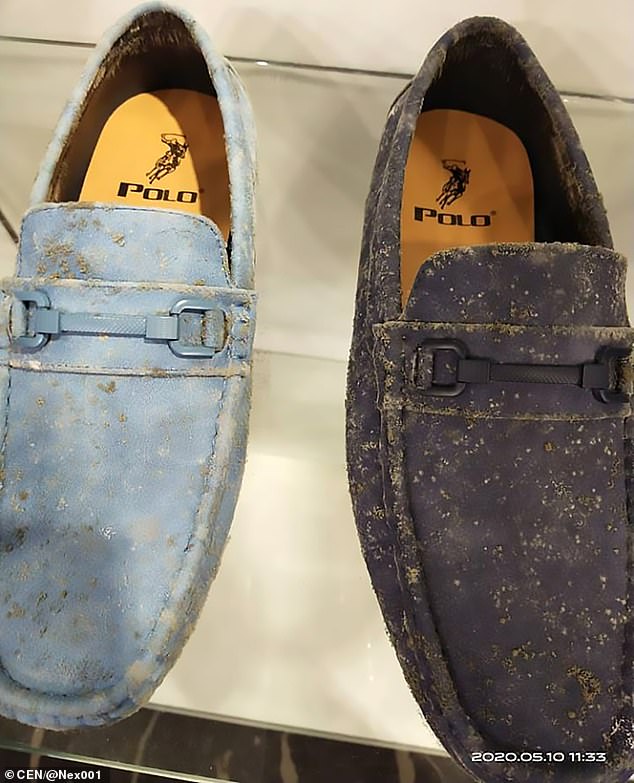 Pictured: Polo loafers fell victim to the mould at this store in Malaysia after they shut down due to the coronavirus pandemic

A spokesman for the shop said the ‘damaged goods’ had been removed. Several cleaners in masks and hazmat suits were on Tuesday throwing out the items and giving the area a deep clean.

They were seen chucking the designer leather goods into black bin bags. Other members of staff were cleaning the air vents and hoovering the carpets to remove the fungal spores and mould.

The spokesman said: ‘We take it very seriously in cleaning and disinfecting our stores to ensure a safe and healthy experience to our valued customers. Metrojaya Suria Sabah is now undergoing a thorough cleaning process by our dedicated staff and will be ready to welcome customers in a few more days.’

Malaysia’s movement control order (MCO) started on March 18 and has been extended until June 9 but some businesses have been allowed to reopen. 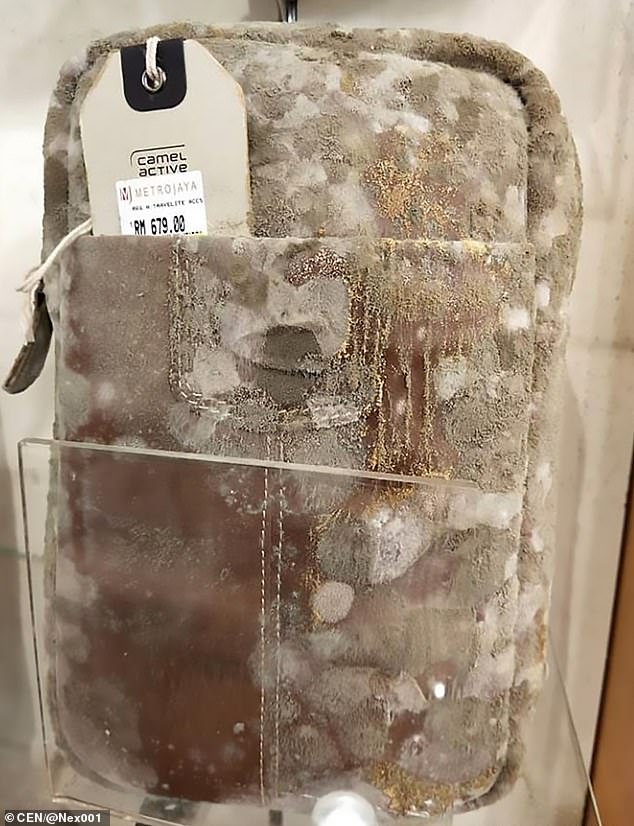 This bag, which has a price tag of £126, was completely ruined by the yellowing mould at the store in Malaysia after employees closed the shop down for two months due to the coronavirus outbreak 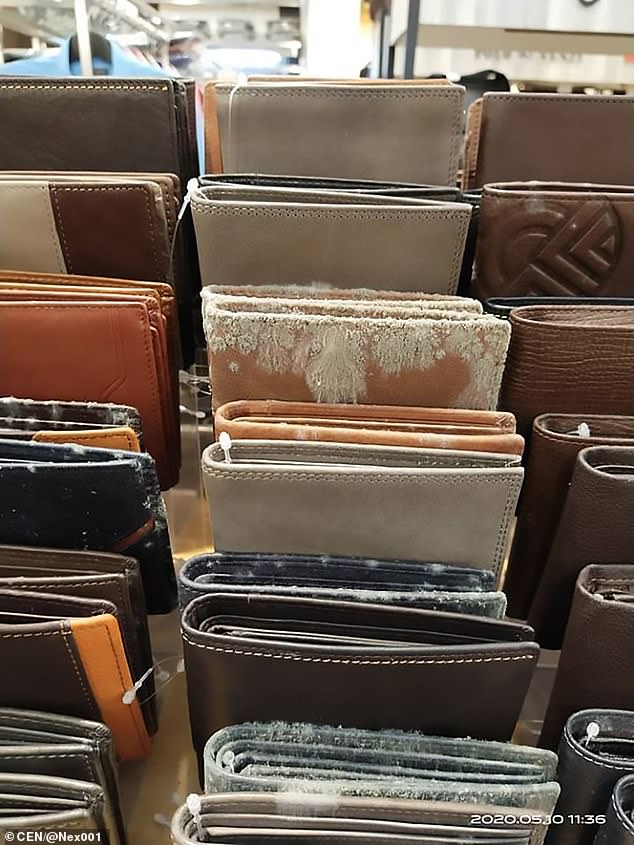 Pictured: Furry blue mould can be seen taking hold on the wallet rack after employees locked down the store two months ago due to the coronavirus outbreak in Malaysia

Why leather goes mouldy and how to avoid it happening

Leather clothes, shoes, and accessories are prone to mildew and mould growth if stored in an area where moisture and heat levels are too high.

Ideally, leather should be stored at room temperature and a humidity of 40-60 per cent.

Adequate air circulation is also very important. Constant humidity of more than 70 per cent, a high ambient temperature and lack of air circulation will contribute to growth of fungi and bacteria.

It is also good for the leather to not be in direct sunlight. Leather products should also be well spaced out in the home to ensure air circulation.

During its production, the leather must be treated with the appropriate level of fungicides. 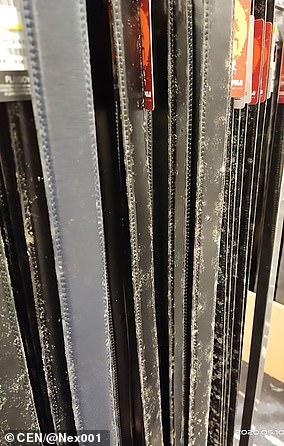 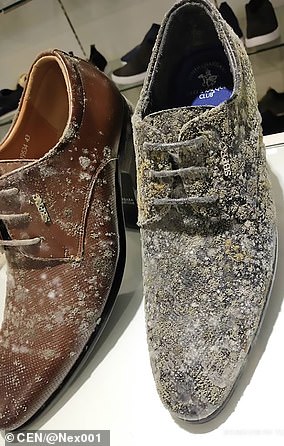 Pictured: A rack of belts (left) and shoes (right) completely ruined by the mould at a store in Malaysia. Employees discovered the mould-hit store after closing down for two months in response to the coronavirus outbreak. 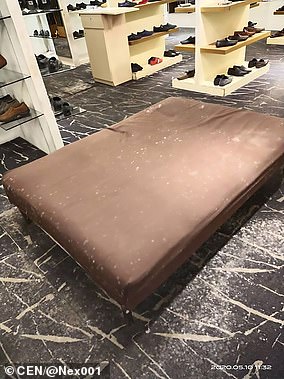 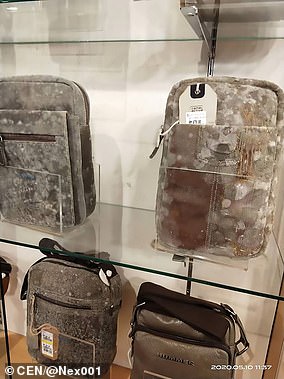