A male breast cancer survivor says hospitals assume he is a woman before he turns up in person because so few men get the disease.

Tony Herbert, 72, was sent letters inviting him to routine checkups advising him to wear a blouse and skirt to make it easier to get undressed for the scans.

And hospital staff often presume it is his wife, Brenda, who is there for the appointment, Mr Herbert says.

The retired paper company director was diagnosed with stage three breast cancer in January 2011 after finding a lump in his right nipple.

Just three days after his diagnosis, Mr Herbert went under the knife for a gruelling two-hour single mastectomy of his right breast.

The pensioner said he felt isolated being one of few men on the ward during chemotherapy and felt like he was battling the stigma a ‘woman’s disease’.

Tony Herbert, 72, a breast cancer survivor, was sent letters inviting him to routine checkups advising him to wear a blouse and skirt to make it easier to get undressed for the scans 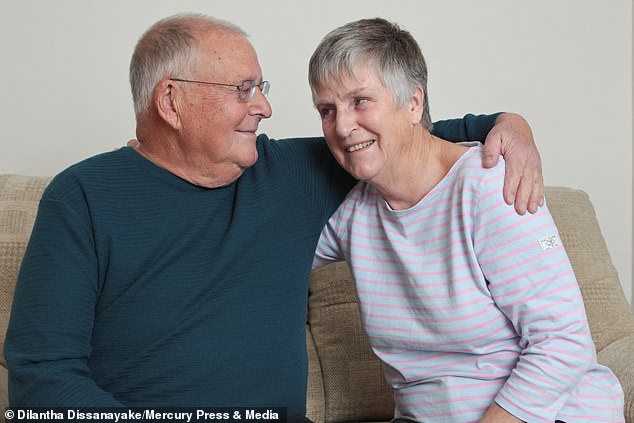 Hospital staff often presume it is his wife, Brenda, who is there for the appointment, Mr Herbert says. They are pictured together at their home in Leicester 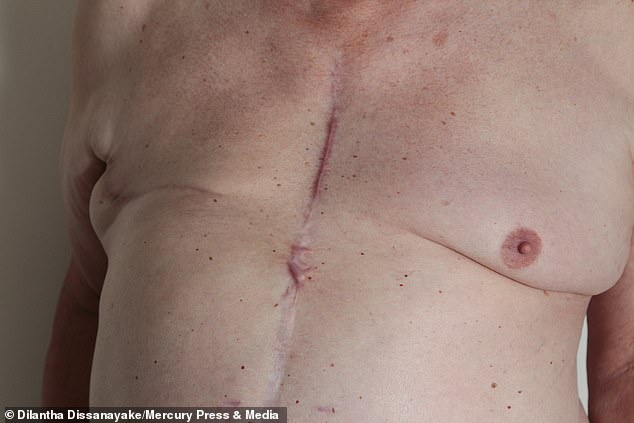 Three days after his diagnosis in 2011, the father-of-two went under the knife for a gruelling two-hour single mastectomy of his right breast (pictured)

The grandfather-of-two, from Leicester, said: ‘One of the reasons why men don’t refer themselves as quickly as women is because we think breast cancer is a woman’s disease and it affects our masculinity.

‘A number of times we went to the hospital they kept assuming that my wife, Brenda, was the one going for the appointment. I just had to laugh it off.

‘My mammogram letters say “you should wear a blouse and skirt so you can get dressed quickly”.

Macmillan Cancer Support lists some of the signs and symptoms of breast cancer:

‘It doesn’t bother me, but it’s obviously just because I’m the only man there.

‘All the lads down the pub say I should turn up in a blouse and skirt for my next appointment.

‘When I was undergoing treatment, I said to my wife I felt like a special person because I was the one of a few men on the ward so everyone recognised me.’

Mr Herbert, a father of two, first noticed a pain in his right nipple during a safari holiday to Namibia in August 2010.

Two months after he got home he noticed it had become a lump measuring an inch across but he simply Googled his symptoms and decided it was probably a cyst – with a GP appointment in January 2011 confirming the same.

But after Brenda felt the lump when she playfully poked him in the chest, she suggested Mr Herbert went back to his GP. He was then referred to Leicester Glenfield Hospital where he was diagnosed with grade three breast cancer.

Mr Herbert said: ‘I was on a safari holiday in Namibia – my nipple was sore but we’d bouncing about in the car so I thought the seatbelt had been rubbing against it.

‘It persisted when I got home and I felt a lump.

‘I looked it up on the internet but it said it was probably just a cyst so I ignored it. 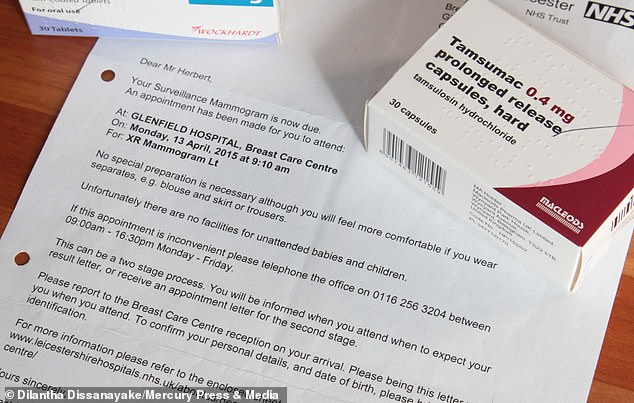 One of the letters sent to Mr Herbert saying ‘you will feel more comfortable if you wear separates, e.g. blouse and skirt or trousers’ for a routine scan 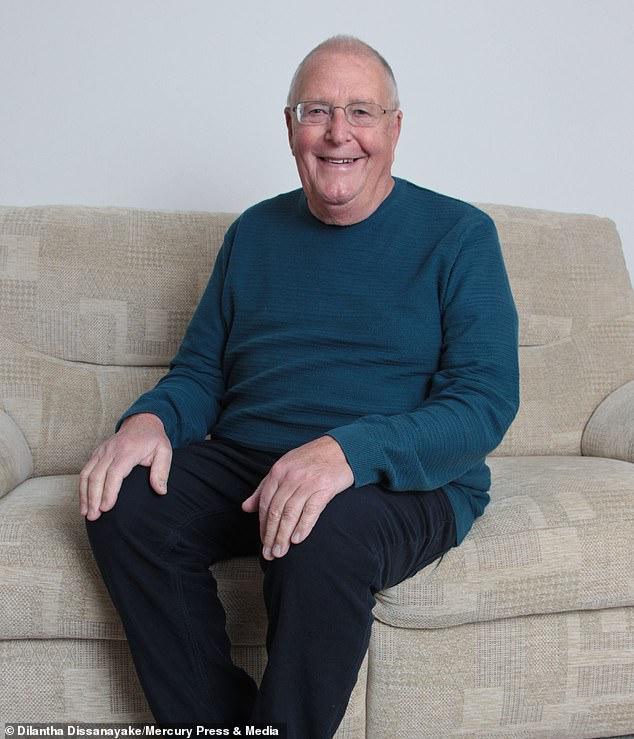 While facing the stigma of battling a ‘woman’s disease’, the pensioner said being one of a few men on the ward while having chemotherapy made him feel isolated

‘It got bigger and just after Christmas, four months after the initial soreness, me and Brenda were larking around and she poked me and felt it.

‘At the hospital, I could tell by the doctor’s face that it was breast cancer, but I was surprised it was. A biopsy showed that it was aggressive.

‘I was under the knife three days later, I had a panic because it was obviously pretty serious to need the op that quickly.’

There are about 390 men diagnosed with breast cancer each year in the UK. This compares to around 54,800 cases in women.

An estimated 2,670 new cases of invasive breast cancer will be diagnosed in American men this year, and 500 men will die from the disease.

After his mastectomy, Mr Herbert went through six rounds of chemotherapy, a lymphadenectomy and three weeks of radiotherapy which caused him to lose his hair.

Mr Herbert said: ‘For women, having a mastectomy there’s a big issue with the shape of the body and losing a breast.

‘From a male perspective, it’s not really important. It doesn’t make a difference to your life not having boobs.

‘I lost my hair but I didn’t have an awful lot anyway. I was shocked when it fell it when out but for me it wasn’t a big deal.

‘One good thing is I didn’t have to shave my face as often, as I hate shaving.’

CAN MEN GET BREAST CANCER? YES – AND IT’S OFTEN DEADLIER

It is exceedingly rare for men to get breast cancer, but possible, and when they do they are more at risk of dying of the disease.

Although men never develop milk ducts in their breasts as women do, they do have breast tissue, and the cells that makes up that tissue can become cancerous.

That said, men of course have far less breast tissue than their female counterparts, so the odds that any of that those cells multiply out of control are lower.

An estimated one percent of new cases of breast cancer every year in the US are diagnosed in men, about one in 1,000 of whom develop the disease.

Still, the fatality rate among men is higher among men.

While nearly 91 percent of women who develop breast cancer are still living five years later,  84 percent of men live the same amount of time after diagnosis.

This disparity in survival rates is mostly due to  few non-biological factors.

Men are less likely to be aware they can get breast cancer, so they may not know to even look for the signs.

Changes to men’s minimal breast tissue are often more subtle, and even if they do notice, many men are embarrassed.

Most breast tumors in men form under the nipple or areola, where there tends to be a little more tissue.

Signs of male breast cancer are similar to those that occur in women: a lump, knot or portion of the tissue that feels thicker and may be tender, irritation, nipple indentation, dimpling or puckering and discharge.

Men can carry either BRCA gene, but BRCA2 leaves them particularly predisposed to breast cancer.

The average age at diagnosis is 65, and men with other excess breast tissue, high levels of estrogen or those who are overweight are at greater risk. 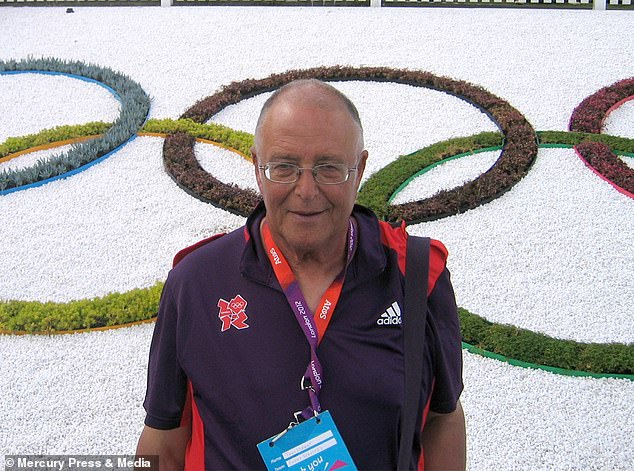 After his mastectomy, Mr Herbert went through six rounds of chemotherapy, a lymphadenectomy and three weeks of radiotherapy. He applied to be a games maker at the 2012 Olympics when he was recovering from chemo (pictured)

Mr Herbert has since discovered he carries the BRCA 2 gene, which increases the chances of breast and prostate cancer, along with his sister and niece.

His daughter has regular checkups but his son has refused to have the test for the gene.

Mr Herbert said: ‘I’m still trying to push him to do something about it. He won’t have the test for the BRCA 2 gene.

‘It’s his choice if he wants to take it further but it would give me piece of mind because then I know if its likely to be passed onto the grandchildren.’

Mr Herbert applied to be a games maker at the 2012 Olympics when he was recovering from chemo which he says gave him the motivation to get fit again.

He also volunteers with Breast Cancer Now’s Someone Like Me scheme, which matches people affected by breast cancer to a trained volunteer who has experienced similar situations.

Mr Herbert added: ‘People just assume it’s a female disease, but I was the only male on the ward been treated for breast cancer, and that was isolating.’

Anyone affected by breast cancer can call Breast Cancer Now’s free Helpline on 0808 800 6000 for information and support, or visit breastcancernow.org.