Malin Andersson has dumped her tattooed-faced boyfriend after having a heart-to-heart with his secret girlfriend, who revealed she’s expecting his fifth child.

The devastated Love Island star, 29, ended her 18-month romance with Michael Sadler, 35, last night after his partner of seven-years Rebecca Barr, 38, contacted her to reveal he has four children and one that’s due in August.

Malin, who was photographed on MailOnline yesterday holding hands with Michael, 35, had no idea her boyfriend is an expectant father.

‘Heartbroken’: Malin Andersson has dumped her tattooed-faced boyfriend after having a heart-to-heart with his secret girlfriend, who revealed she’s expecting his fifth child

Speaking exclusively to MailOnline, Rebecca warned Malin to stay away from Michael, who she branded a serial liar.

She said: ‘I am just terrified at the level of narcissism, the lies, and everything that’s happened.

‘I spoke with Malin last night, it’s really quite disturbing. He caught Malin at a vulnerable time.

‘To everyone else he’s so lovely, but he needs to be exposed. In my soul I cannot let another women go through what I’ve been through for seven years. 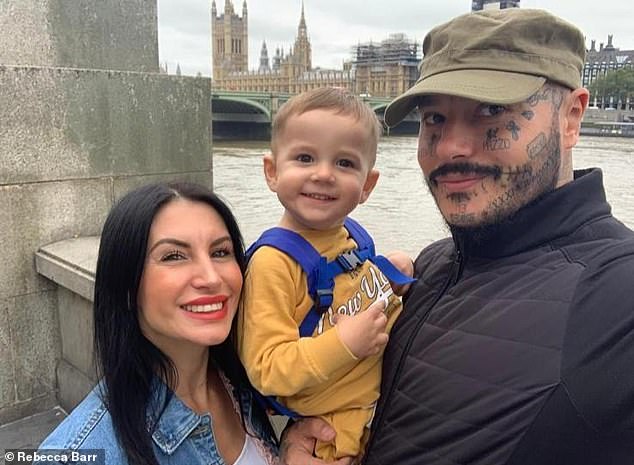 ‘I’m just terrified’: Rebecca Barr, 38 pictured with Michael Sadler, 35, and their son Luciano, two, last year, warned Malin to stay away from Michael, who she branded a serial liar

‘I really feel like I need to speak my truth in whatever sense that needs to work but I’m just so worried about his motives. I don’t think she’s the first Love Island star he targeted.’

As well the baby they’re expecting in August, Rebecca and Michael share son Luciano, two, and he also has three other children from a previous relationship.

It is understood Michael did not tell Malin about any of his offspring during their time together.

It’s believed the pair first met when Michael reached out to Malin claiming to be a ‘security professional’ shortly after her ex Tom was sentenced to 10 months in prison.

But Rebecca alleges that Michael lied about his job as a bodyguard when in reality he’s a guard at a car park. 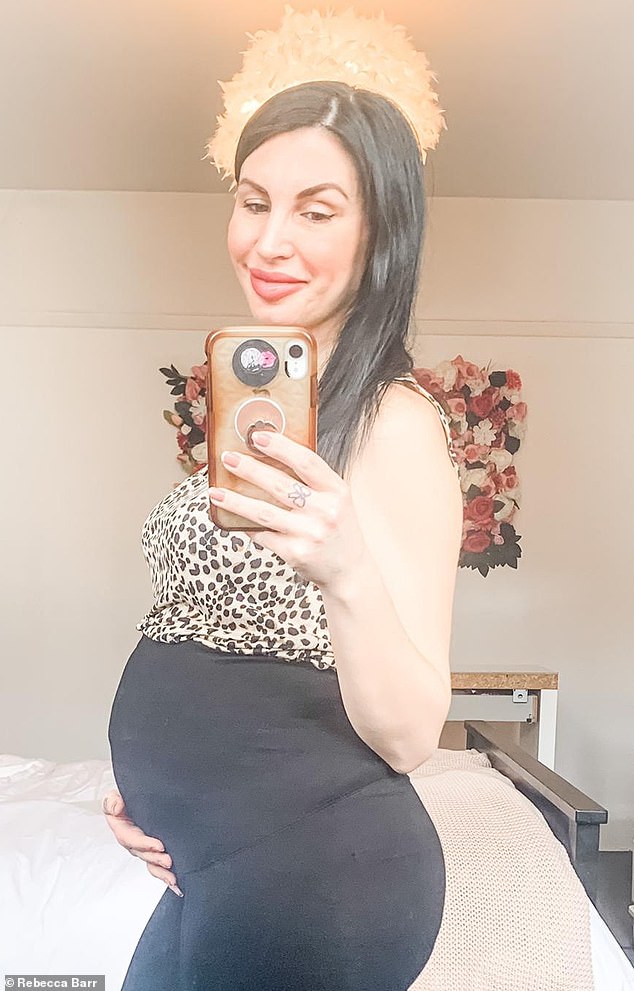 ‘He needs to be exposed’: Malin ended the 18-month romance last night after Michael came clean about his four other children and the one that’s due in August

She claimed: ‘She didn’t even know he has children – he has five children, I’m pregnant with baby number five, we’ve got one together and he’s got three from a previous relationship.

‘Malin said he initiated contact about 18 months ago when her ex went to prison under the guise of being a concerned security professional and apparently they’ve been talking for 18 months but I didn’t know anything about it.

‘He’s not a close protection officer and his name is not Michael James, it’s Michael Sadler. He told Malin he’s Italian and he’s not – it’s all an absolute lie, everything from start to finish.

‘He’s technically qualified; he got his license a couple of years ago but he’s never had the opportunity to do it.’ 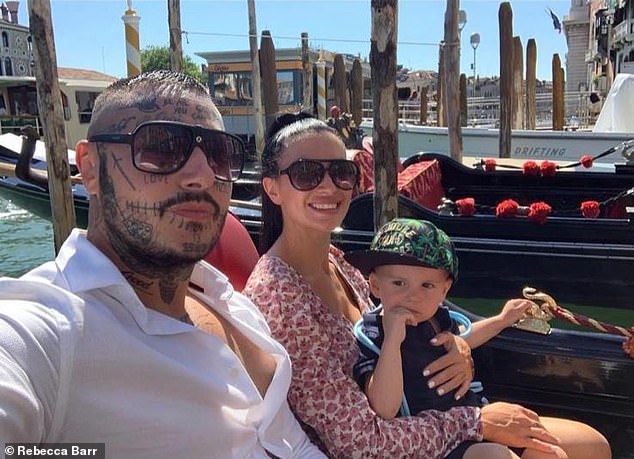 Family: Michael and Rebecca are expecting a daughter together in August, while they also share son Luciano, as well as Michael being a dad to three other children from a previous relationship 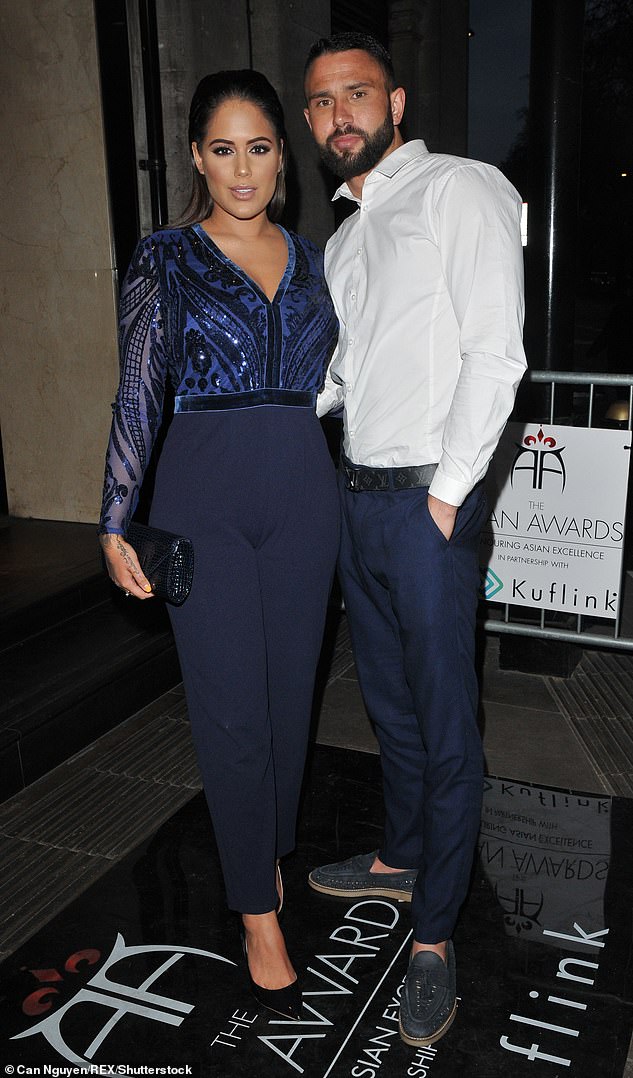 Suffered: Malin’s ex Tom Kemp was imprisoned last September after he admitted to assaulting the reality star, which left her with a broken her hand (pictured 2019)

Pals close to Malin say she’s heartbroken and can’t quite believe Michael never told the truth about being a father and she’s looking to draw a line under it and move on.

But Michael is determined to win her back, telling MailOnline: ‘I love Malin to bits.’

A source close to Malin confirmed: ‘Michael has been living a secret life for months. Malin had absolutely no idea she was being lied to.

‘She has fully cut ties with Michael and blocked him on Instagram. She doesn’t want anything to do with him.’ 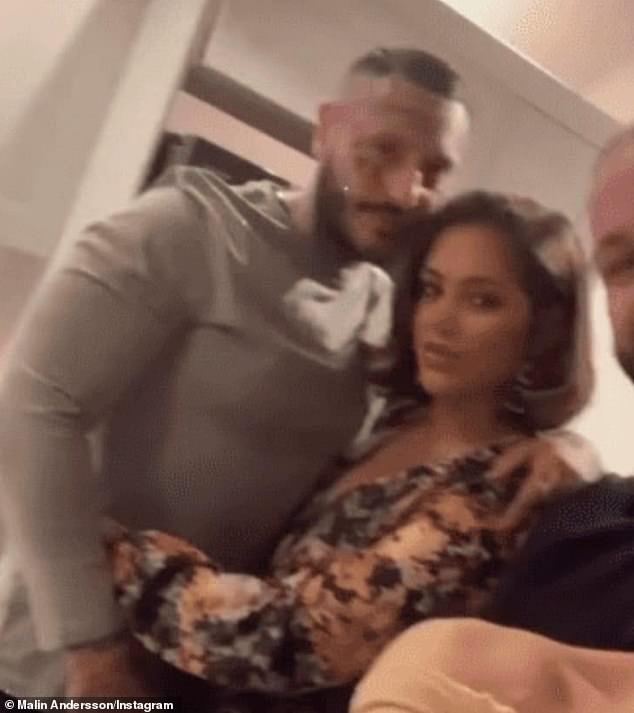 ‘She has fully cut ties’: Pals close to Malin say she’s heartbroken and can’t quite believe Michael never told the truth about being a father and she’s looking to draw a line under it and move on

Rebecca’s conversation with Malin was sparked by MailOnline’s pictures of them on a date together this week.

According to Rebecca, Michael claimed he was going to work on Tuesday night but it later emerged he had been with Malin at a restaurant in Essex.

Rebecca said: ‘He told me he was doing a night shift on Tuesday and obviously that’s when he went out with Malin.

‘He got back here at 11/12 and we spent the next day together and we were going to have a proper chat about everything but then I saw the article.

‘There was not an ounce of remorse or shame.’ 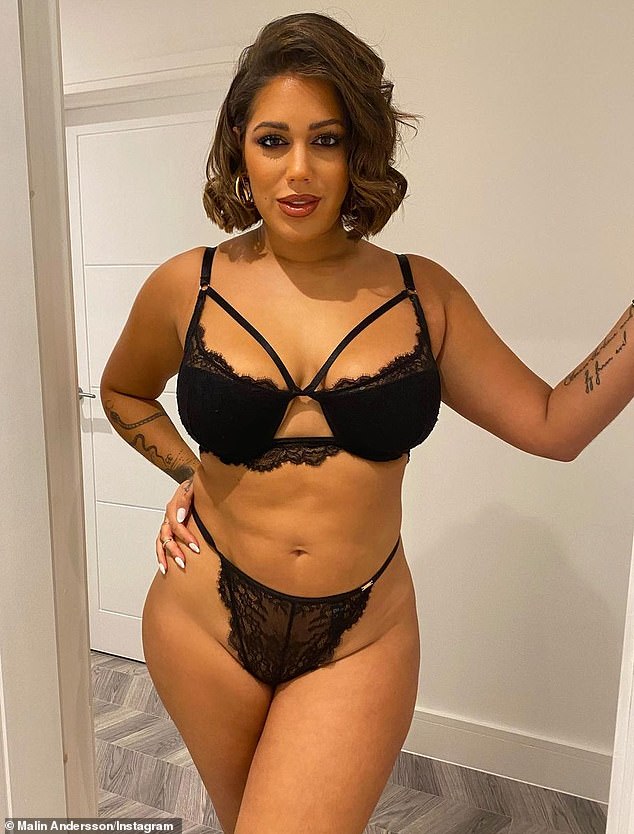 ‘She wants nothing to do with him’: While the Love Island star aims to move on from Michael as quickly as possible, he hopes to win her back, telling MailOnline: ‘I love Malin to bits’

Rebecca claims Michael got his face tattooed to strike fear into people, alleging he loves to ‘shock and scare.’

She said: ‘He got them done while we were together. It’s a mask.

‘He loves the element of fear it gives people that they don’t approach him, it intimidates them, he loves to shock and scare people but it’s a persona.

‘He didn’t have them up until a couple of years ago. He’s insecure and a pathetic person. He’s constantly in the mirror like ‘babe how do I look?’ He adopts all of these personas.

‘Now he’s American army and he really identifies with that but prior to that it was like Peaky Blinders, and really buying into that gangster mentality even though he has no affiliation with anything.’

Malin’s ex Tom Kemp was imprisoned last September after he admitted to assaulting the reality star, which left her with a broken her hand.

Tom was released in December after three months and will serve the rest of his term on Home Detention Curfew.

In June, Malin spoke about the abuse and emotional torment she suffered while being in the on/off relationship during 2018.

She said: ‘It started with things being thrown in my face out of anger – food, bottles of water, whatever was in his hand, all out of anger.

‘He switched from zero to 100 within seconds. Once they think they can do that to you, it escalates.’

Tom was the father of Malin’s baby girl Consy, who tragically died with a heart defect in January 2019, just one month after being delivered at 33 weeks. 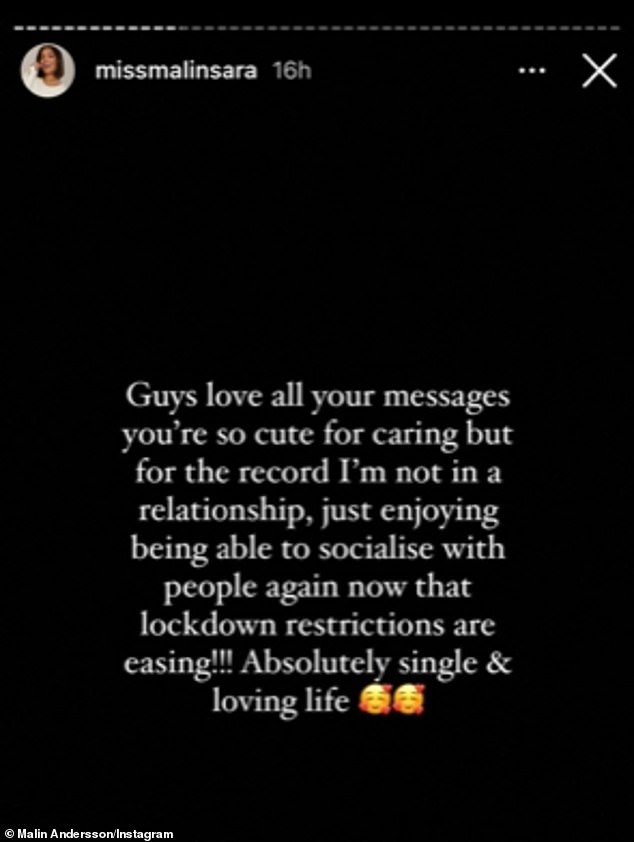 ‘Single and loving life’: On Instagram last night, after being told the truth about Michael, Malin addressed her fans, saying: ‘I’m not in a relationship, just enjoying be able to socialise’