These harrowing images are part of an unearthed set of photographs from Liverpool taken in the Victorian era.

The pictures paint a bleak portrait of what life was like for the downtrodden children at a time of rapid change in a period of intense industrialisation.

Bare-footed, dirt on their face and their clothes torn – three small children look helplessly into the camera.

Meanwhile a little girl stands on a pub table singing for the punters, hoping for some spare change.

Being poor in Liverpool at the turn of the twentieth century almost guaranteed a life in a slum, most likely to the north of the city as many of the factories were located there.

Children were expected to work long hours in dangerous jobs for minuscule wages.

Three children with dirty faces, torn clothes  and no shoes look helpless in this snap taken in Liverpool in 1880. In the Victorian era children were expected to work long hours in dangerous jobs for very little wage. Mortality rates for children were poor, with the main cause of death being polluted water and dire housing conditions 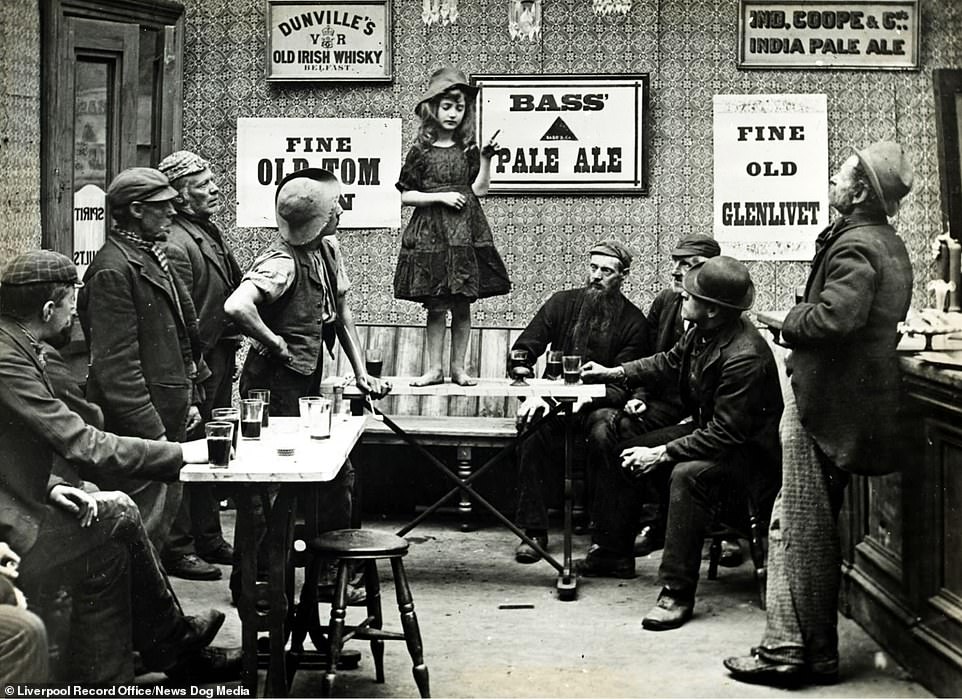 A shoe-less young girl entertains a crowd of men in a pub in Liverpool in 1895. This period fell within the industrial revolution which bought rapid change to many cities, including Liverpool. But the riches of industrialisation were not shared among the whole populace and cities like Liverpool had a dual character. The docks embodied the power and scope of British trading and economic power. While children as young as four would work in terrible conditions in newly opened factories in the north of the city or beg on the streets 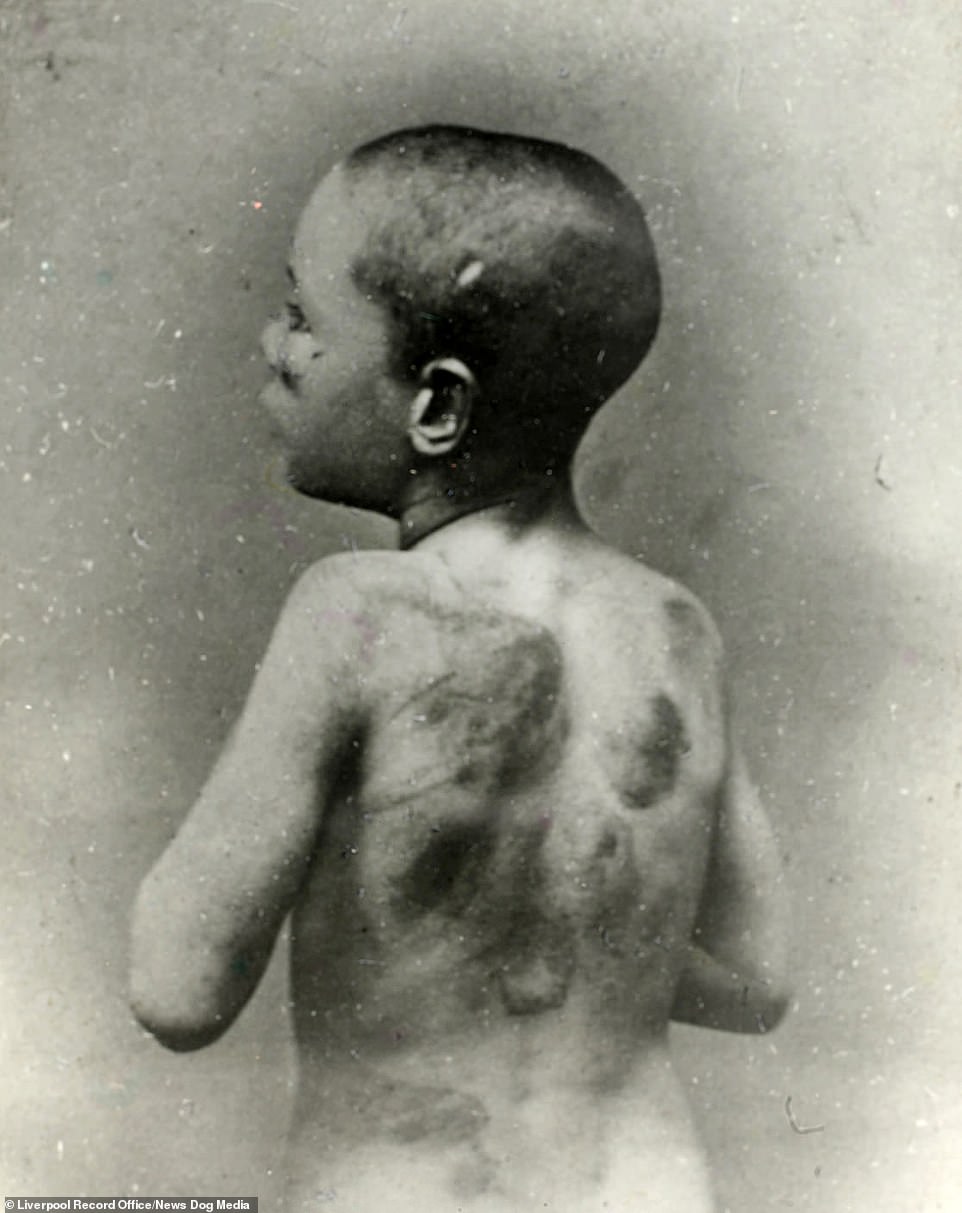 This little boy was brought to the Liverpool Society for the Prevention of Cruelty for Children (LSPCC) in 1900 and had sustained some shocking injuries. It was the first of its time founded in the country with the express aim ‘to form a society for the prevention of cruelty to children.’ Years later similar societies were founded in cities such as London and Glasgow.  The first shelter in Liverpool was opened on Nile Street, before a more permanent base was found in Islington Square 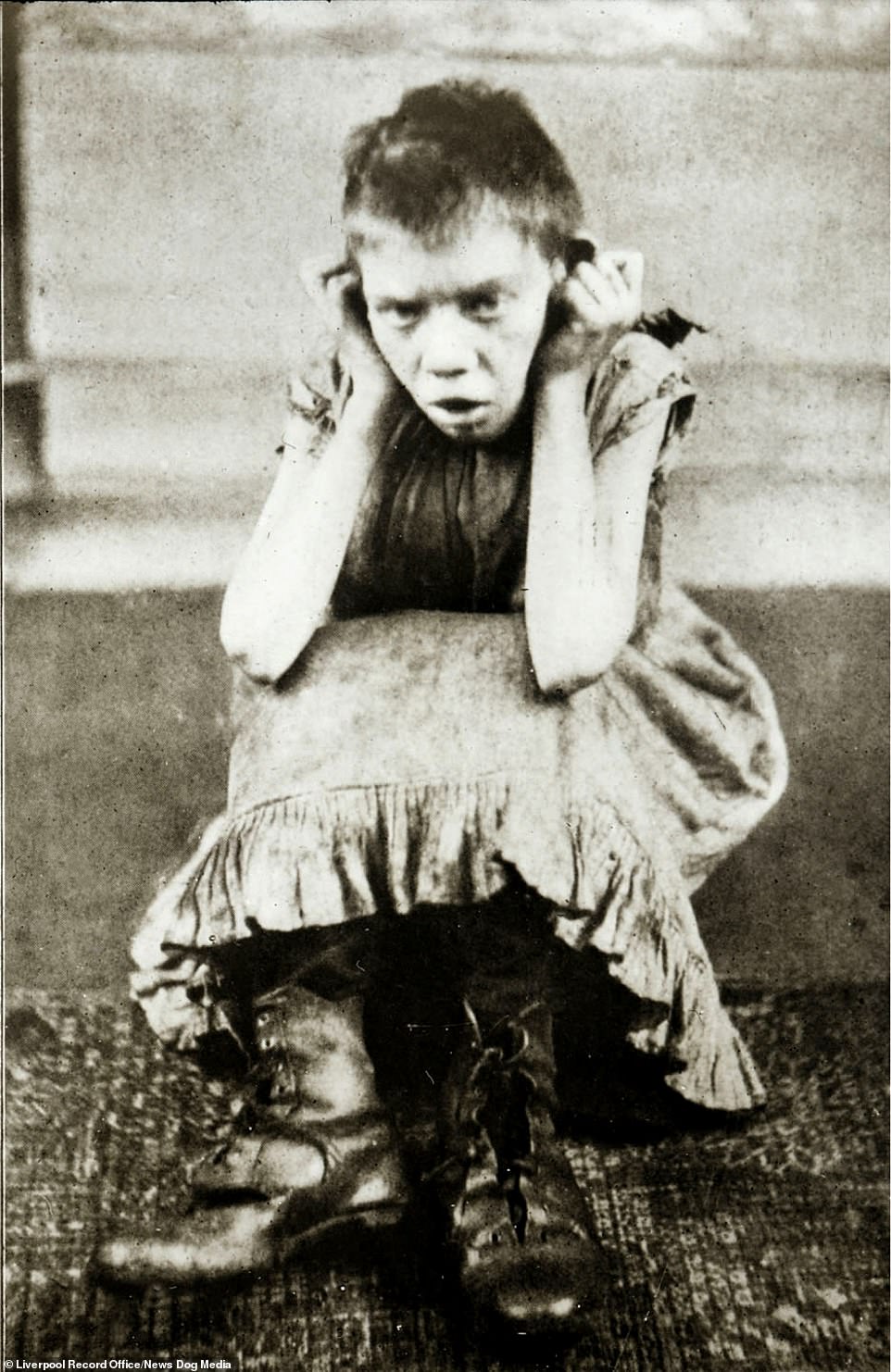 A little girl clutching her ears who was found in a garret, which is a dismal loft, Liverpool, circa 1880. Being poor in Liverpool at the turn of the twentieth century almost guaranteed a life in a slum, most likely to the north of the city as many of the factories were located there. The average life expectancy was 30 years old for a labourer and children born in the poor parts of Liverpool would be lucky to survive their fifth birthday 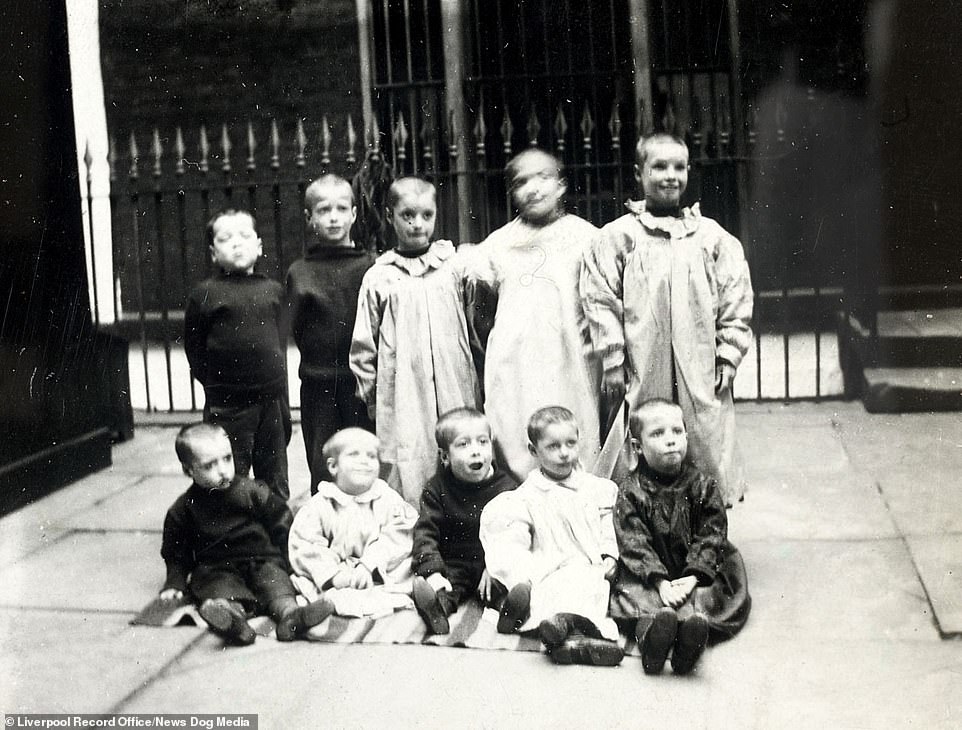 A group of children who have had their heads shaved in order to remove lice in the city, circa 1900. Hygiene was often poor in parts of the city at that time and disease was rife. Of a particular concern during this era was tuberculosis which claimed more than 70,000 lives a year. To add to threats of disease and atrocious standards of hygiene, drinking water was often polluted and was a significant cause of death 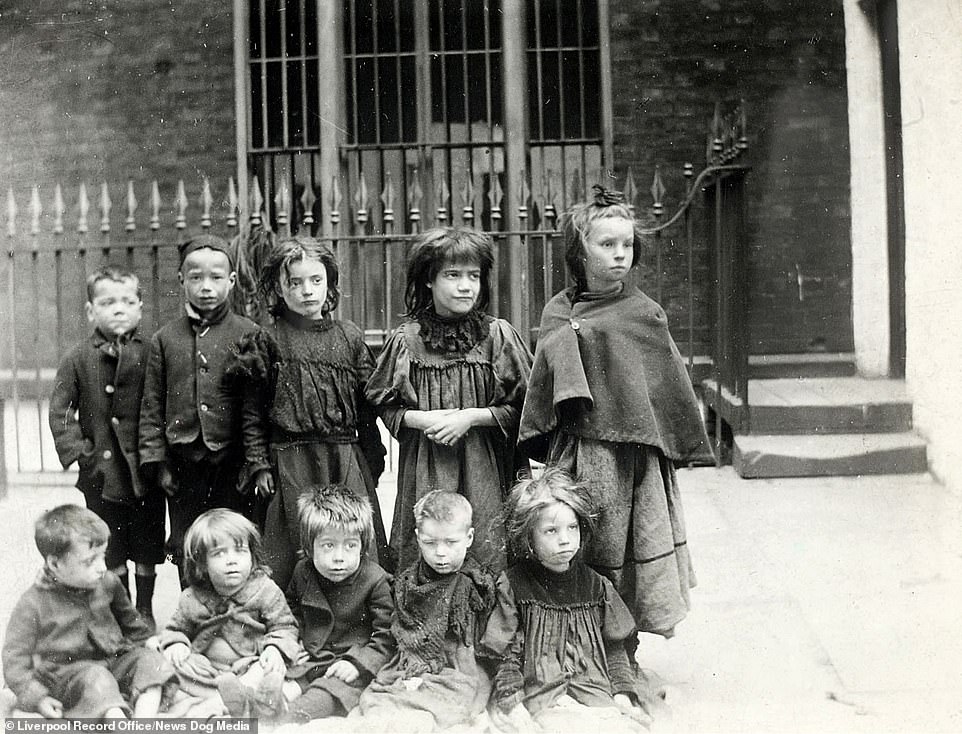 Malnourished children stand outside the Liverpool Society for the Prevention of Cruelty to Children home in 1900. Children at this time could have a variety of jobs such as chimney sweep, coal mine work, selling what they could on the street, or even resort to stealing. Due to the poor standard of drinking water, young children could even be seen drunk in the streets

Jobs children would do included chimney sweeps, the little children who could scramble under machinery to retrieve cotton bobbins, coal mine work or crawling through tunnel too narrow for an adult to undertake.

Some children would struggle to find even these unenviable tasks so would resort to selling what they could on a street. Failing that some of them would steal to get by.

However, it was not always misery as you can see from the large assembly of people watching a spontaneous cricket match beneath Wellington’s Memorial Statue.

Or the row of boys smiling at the camera, despite their lack of shoes and clean clothes, whilst sitting on the Steble fountain outside St George’s Hall.

The photos are from the Liverpool City Library and the Records Office certainly offer an unflinching glimpse as to what life was like. 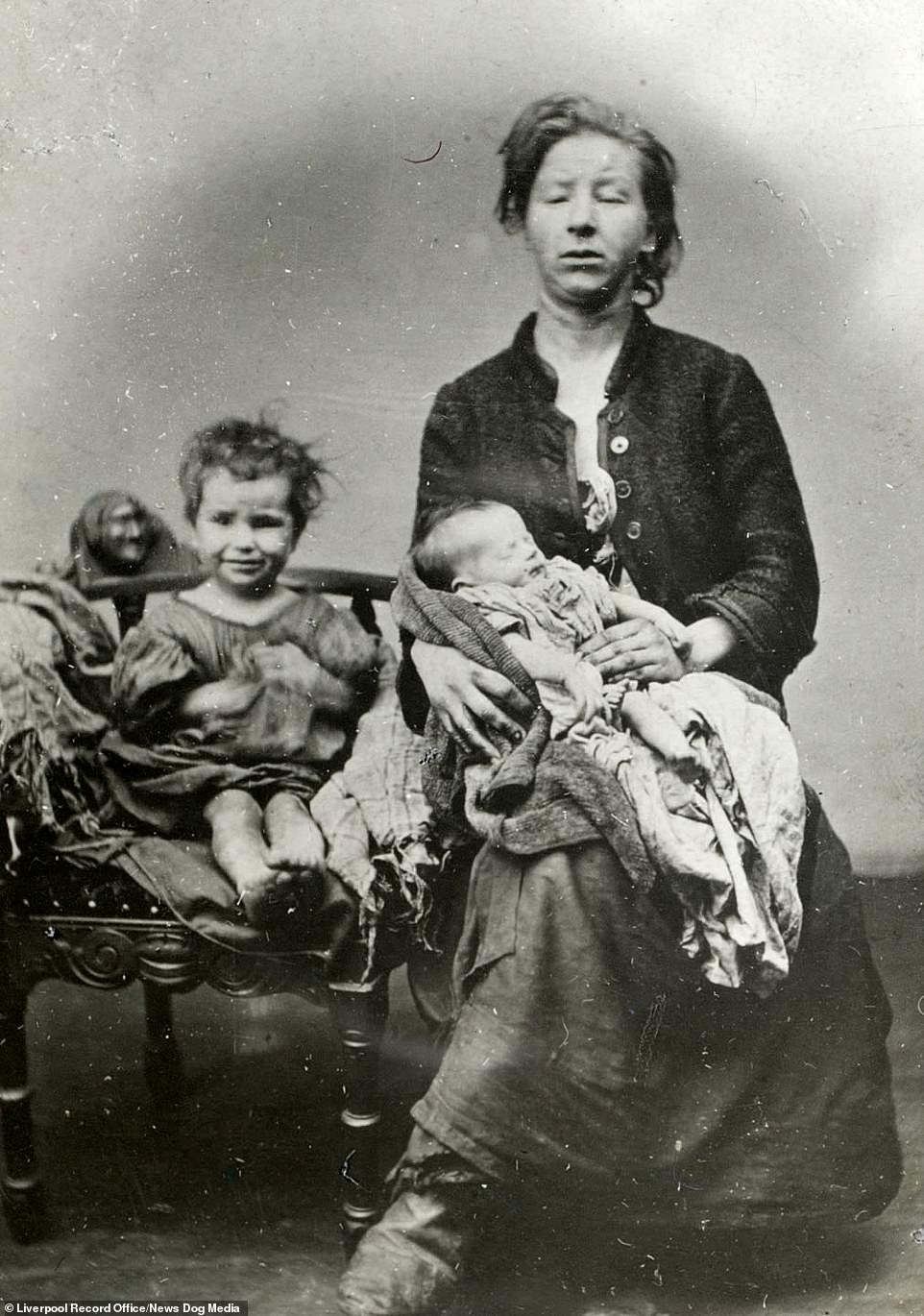 A mother and two children pose for a photograph in the Liverpool Society for the Prevention of Cruelty to Children (LSPCC) in 1900. The LSPCC would frequently become involved in cases where child abusers were prosecuted. After many years of campaigning the first law to protect children in the UK was passed 1889 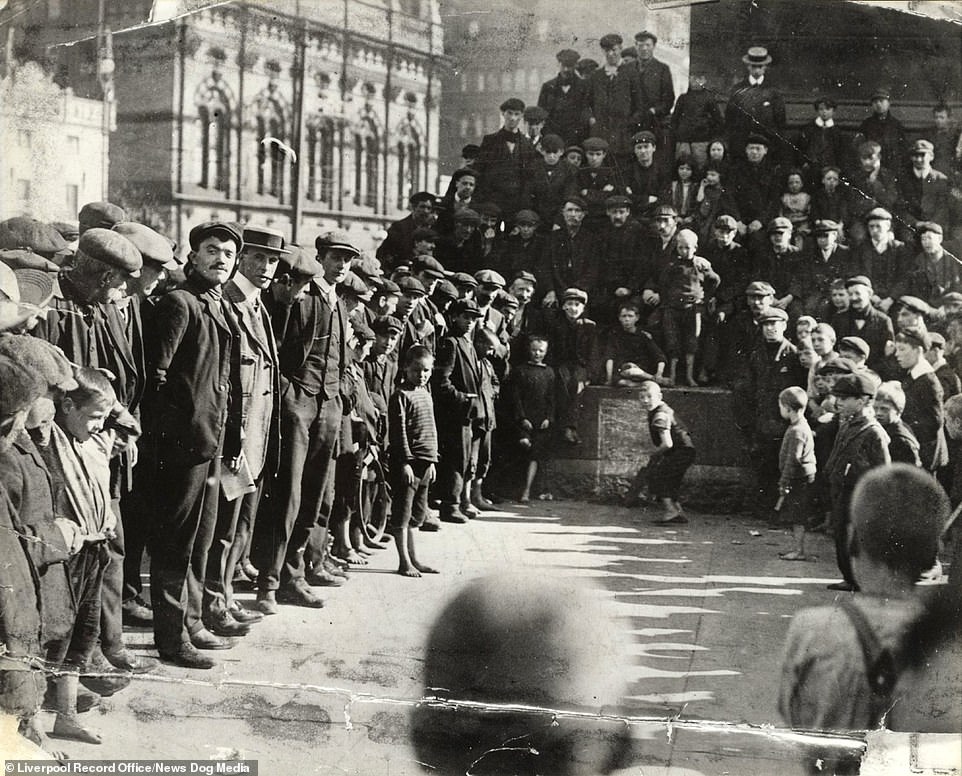 A game of cricket is played with a full crowd assembled beneath the Duke of Wellington’s memorial statue in Liverpool city centre, circa 1890. The statue was unveiled eleven years after Wellington’s death in May 1863. Crowds gathered to see the unveiling and more than 2,000 soldiers attended and there was a 19 gun salute 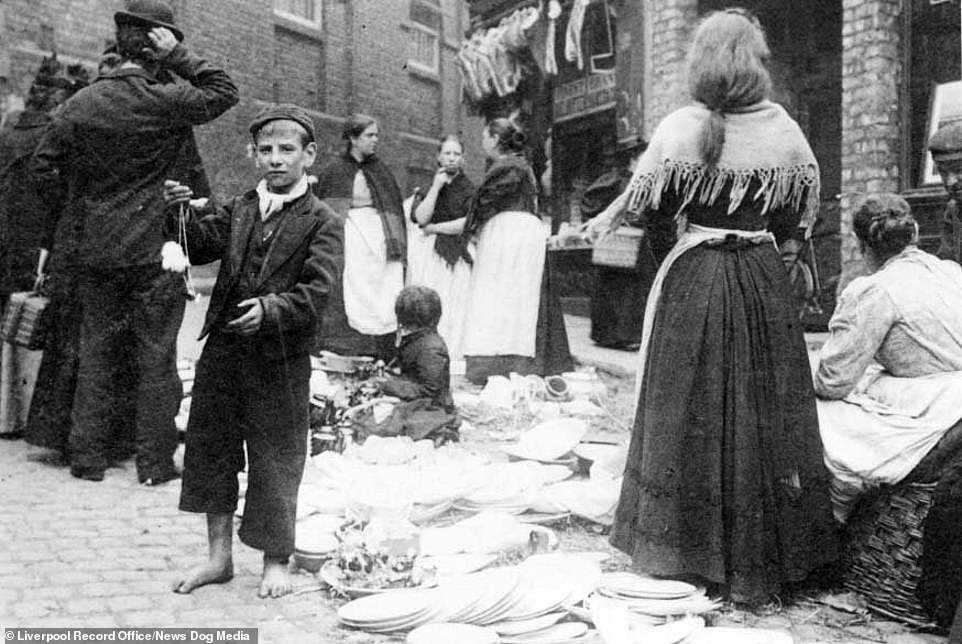 A street scene in a Liverpool slum, circa 1890. The street is littered with plates and other detritus, while a little boy stares into the camera. In the Liverpool slums conditions were often atrocious, with poor quality drinking water and dreadful housing conditions. Whole families would often sleep in just one room 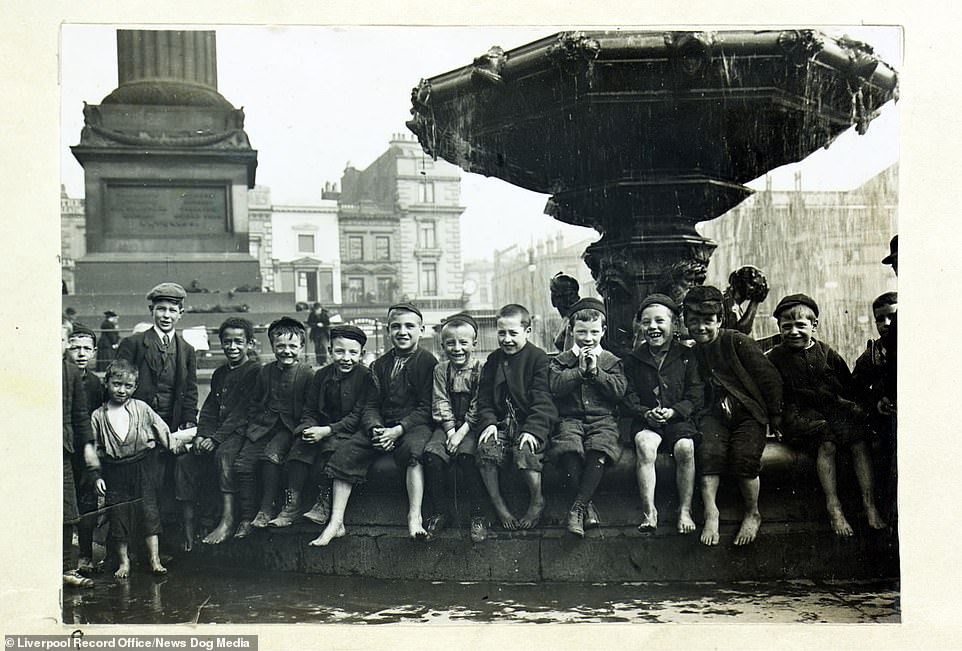 A row of young boys, who mostly don’t have shoes, sit on Seble fountain in Liverpool city centre in 1890. Large numbers of children in the poorest parts of the city ended up in orphanages due to the poor life expectancy of their parents 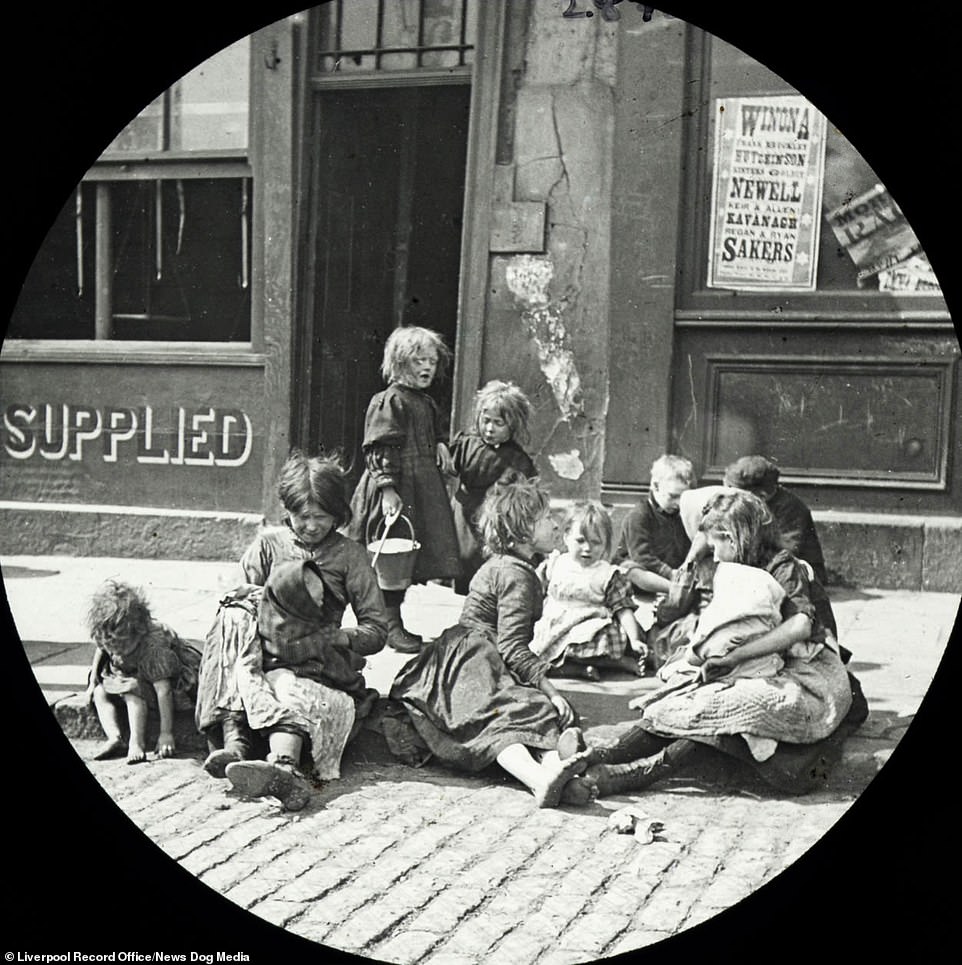 A nursery in a Liverpool slum, circa 1900. During this period the city of Liverpool changed rapidly. Because of the port, the demographic of the city changed significantly. Specifically, this time period saw an influx of Irish who came to the city to find work and escape famine in the 1840s and 1850s 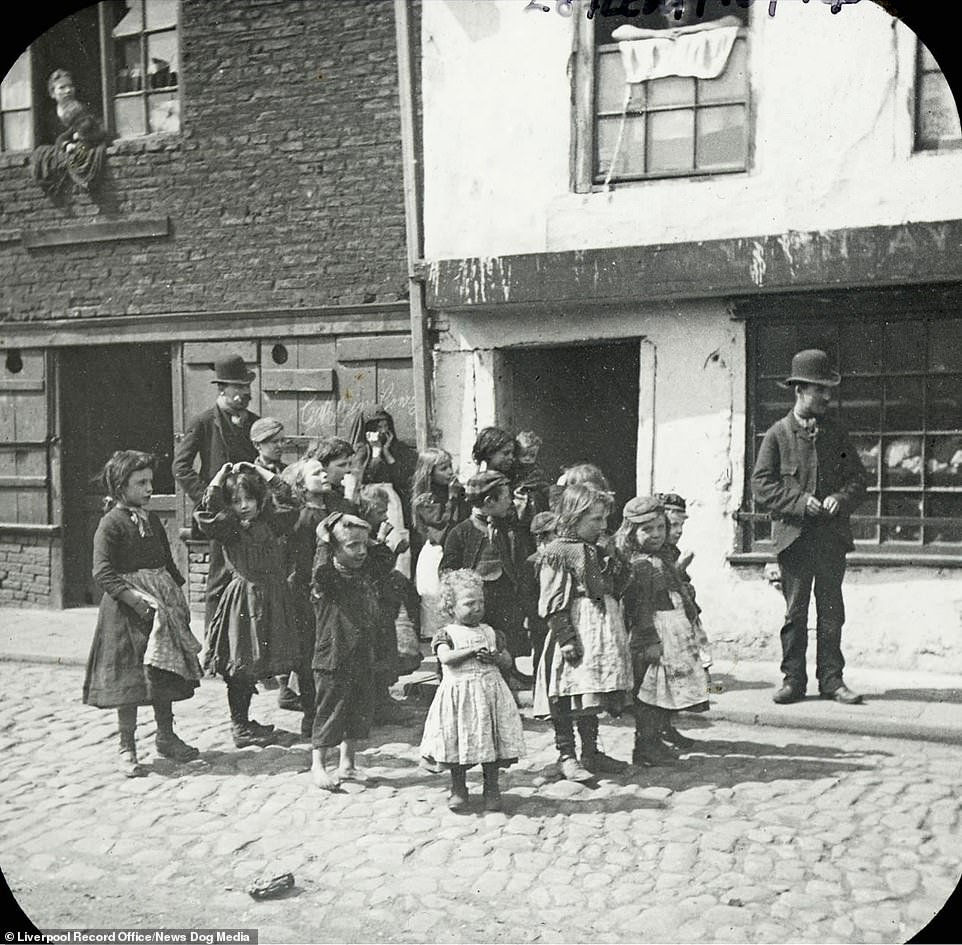 A crowd in a Liverpool slum gather to hear a missionary, circa 1900. The conditions within the slums cannot be understated. The buildings were often of dire quality and filled with rubbish. The shabby nature of the buildings meant it was difficult to keep warm and the poor nature of bathroom facilities, meant it was sometimes more convenient to defecate in the street 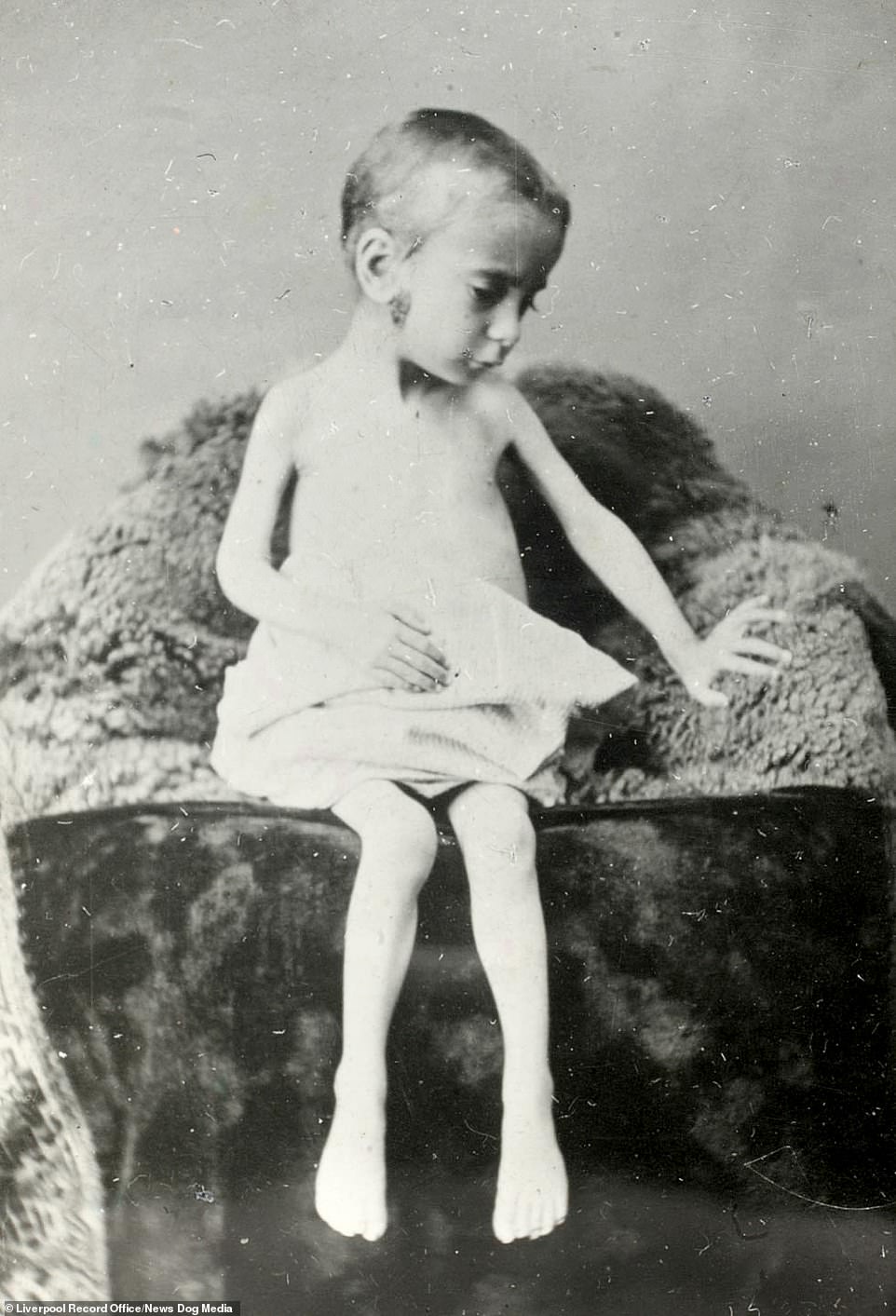 A severely malnourished four-year-old, Liverpool, 1900. For many children in the city, if you did not work you could not eat. This would put you in line for a number of very dangerous jobs such as working in a factory or destitution. Due to the sometimes abusive nature of the family situations at home, some children ended up in the streets, simply striving to get by 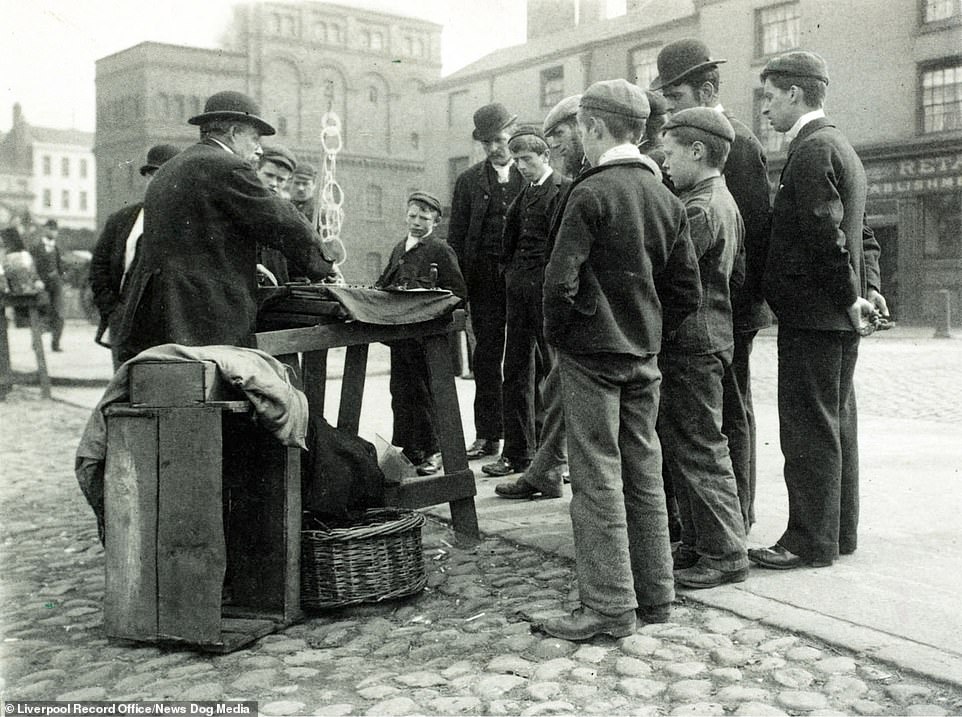 Good are sold close to Liverpool’s pier head, 1890. By the start of the nineteenth century the economy in Liverpool was booming, with a large amount of trade passing through it, mostly due to the port. The town became one of the leading ports of the British Empire and became a world leader in the market for cotton 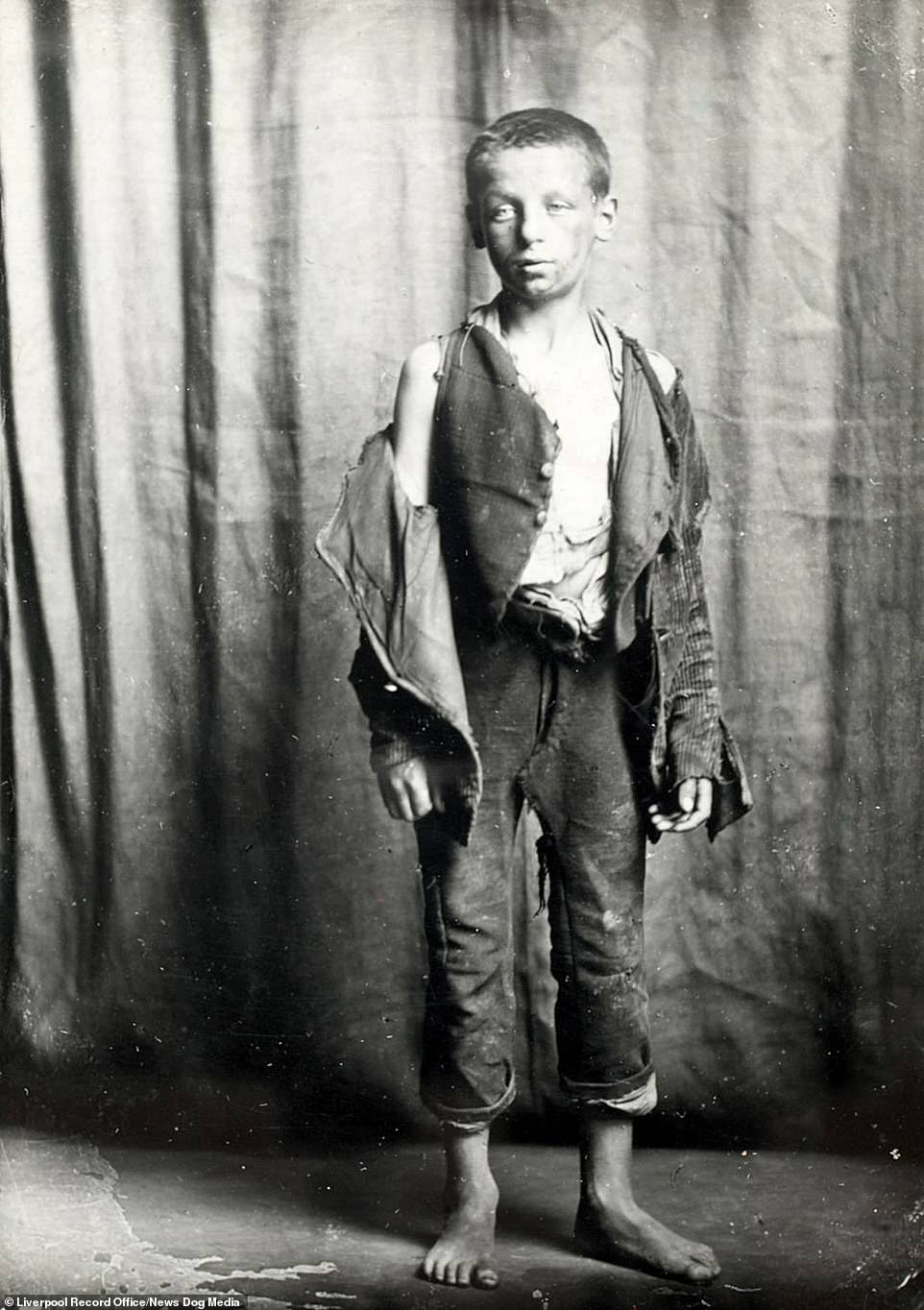 A young boy with torn clothes and a dirty face poses for a picture, Liverpool, 1900. The remarkable photos from the Liverpool City Library and the Records Office certainly offer an unflinching glimpse as to what life was like for our poor ancestors 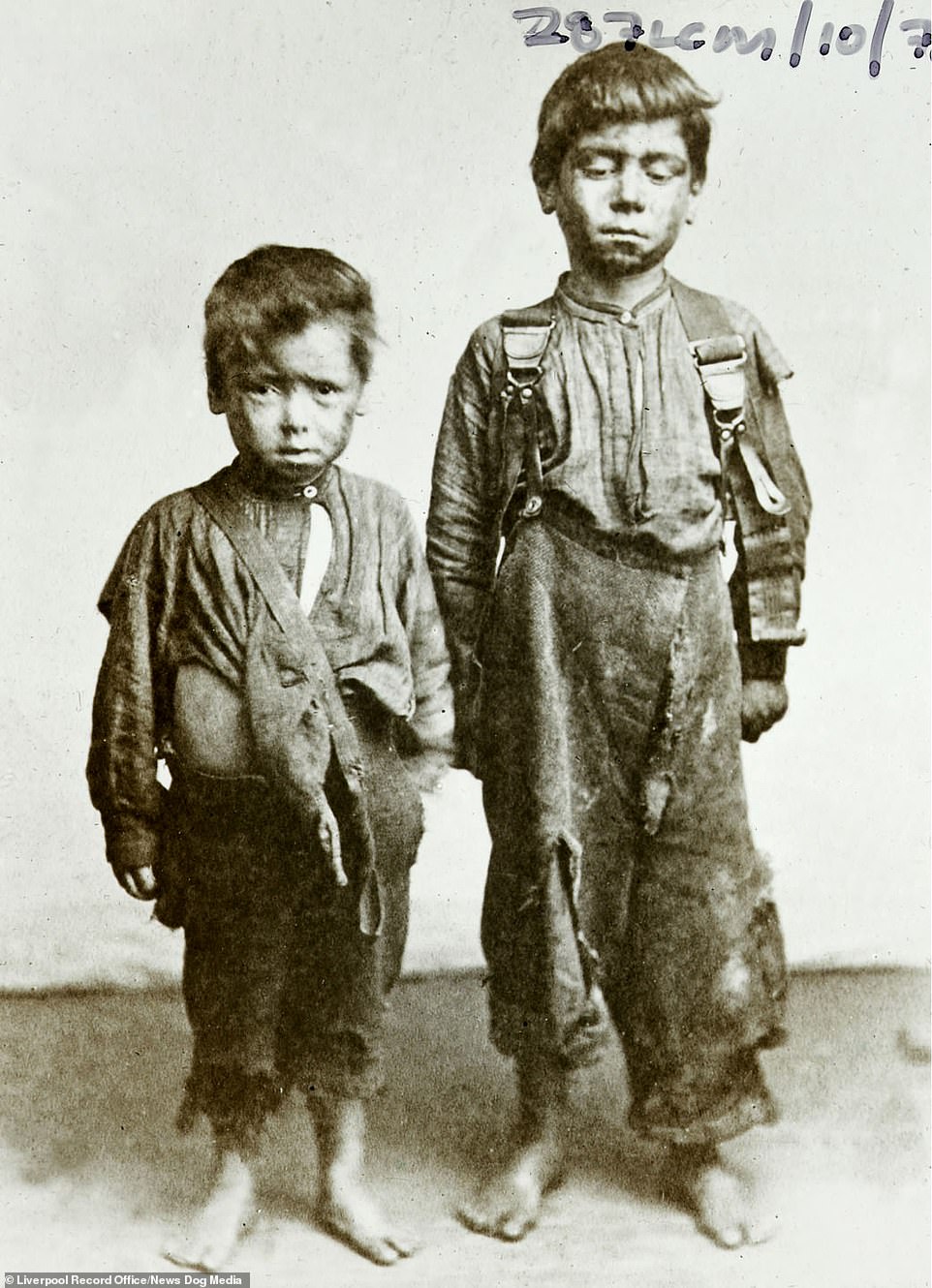 Two bare-footed and dirty looking young boys pose for a picture, Liverpool, circa 1880s. Street children in the city were often found living in large groups in alleys or side streets. The children of the slums were often undernourished and could suffer from a number of ailments not as common today such as rickets 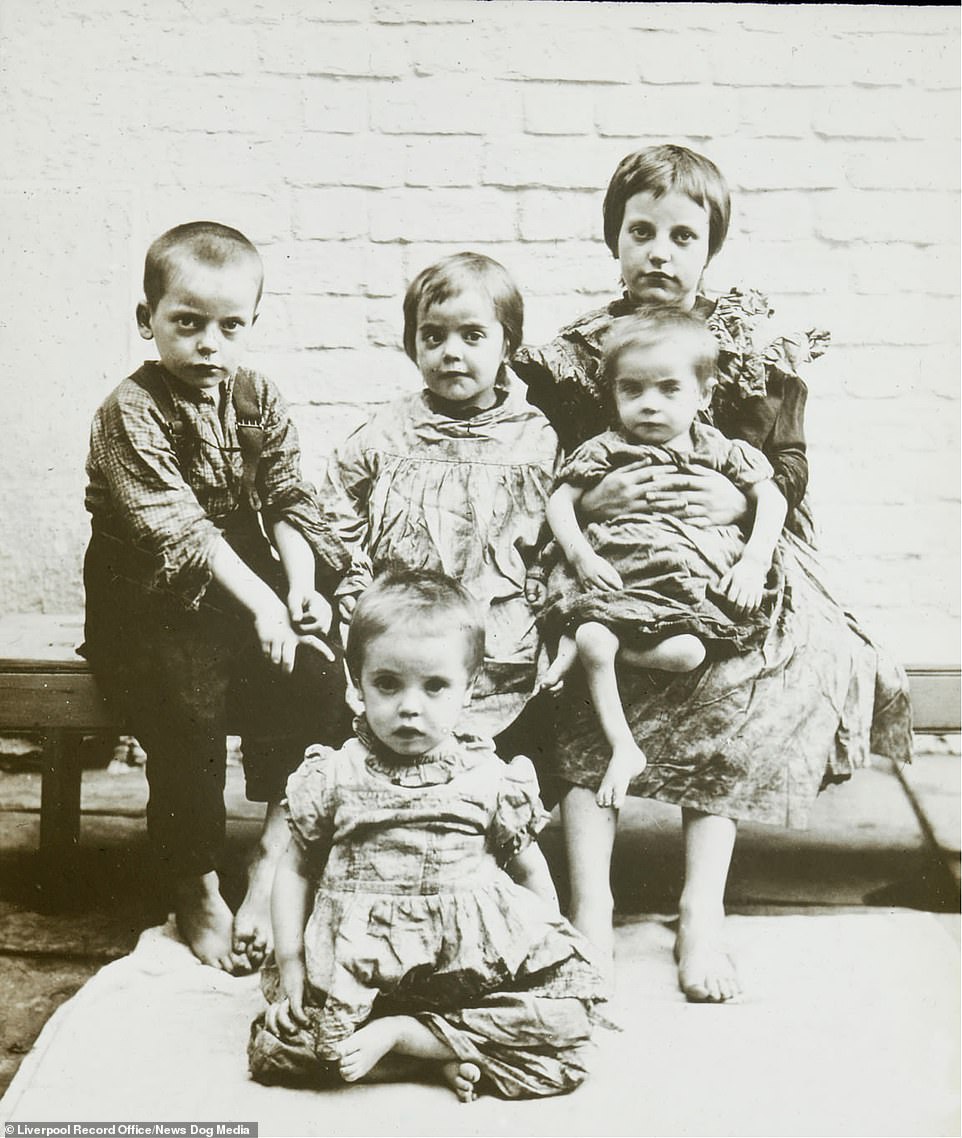 Five ragged children pose for a picture, Liverpool, circa 1900. A typical slum in the Victorian-era would have the most basic of cooking implements. There wouldn’t be an oven and even basic cutlery or plates was rare. A typical meal might consist of some sort of broth, usually made from boiling bones. Scurvy was a common ailment for young children, who often lacked any real form of nutrition 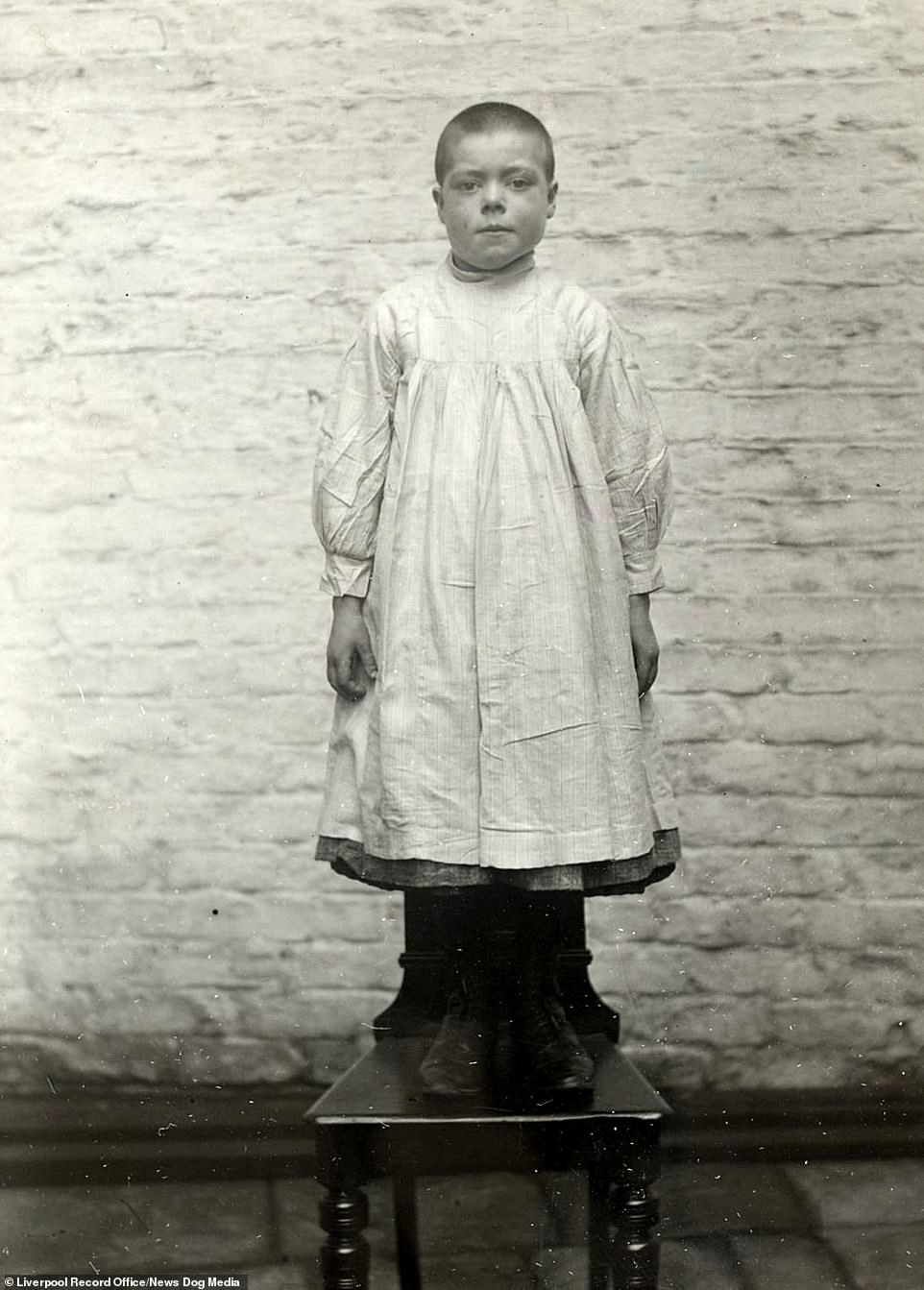 A young girl who has had her head shaven to remove lice, Liverpool, 1900. Being poor in Liverpool at the turn of the twentieth century almost guaranteed a life in a slum, most likely to the north of the city as many of the factories were located there