Mammarazzi! ‘Sharenting’ craze pits proud mums like Catherine Zeta-Jones against one another

Whether it’s an action-packed summer afternoon or the quietest of February evenings, Jules Osmany is a mum on a mission – to record every waking moment of her teenage daughter’s life. There’s 14-year-old Alexa baking, or playing with the family dog, or trying on yet another new outfit. No matter how mundane the activity, it seems, Jules is at the ready, smartphone in hand.

And it certainly doesn’t end there. In fact, the important part is what follows: Jules, 55, posts the pictures to her social media accounts up to four times a week. On summer holidays she’s more industrious still, posting at least one shot a day on Facebook and Instagram.

No wonder the family’s elegant Victorian townhouse in Northampton is crammed with photos of Alexa and her brother Louis, from when they were babies to the teenagers they are today – pottering about in streams on days out, giving each other piggybacks, swimming in glorious holiday pools and posing in sunglasses like models. 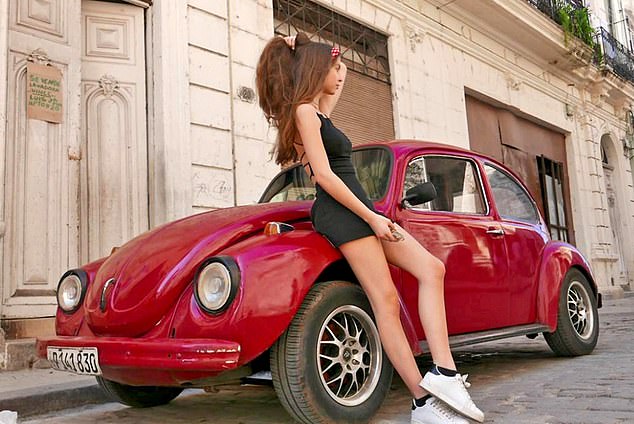 Catherine Zeta-Jones uploaded this photo of her daughter to Instagram with the caption: ‘Carys with a car (love heart emoji) mammarazzi is what my kids call me with my camera’

She is not the only proud mum to turn obsessive snapper, of course. In fact, she belongs to a growing breed addicted to taking pictures of their children whenever and wherever they can.

Hollywood actress Catherine Zeta-Jones is leading the way – and when she recently posted a photo of her 16-year-old daughter Carys on a family holiday, she also came up with a telling new label. ‘Mammarazzi is what my kids call me with my camera,’ she said. The term – a play on the term paparazzi – has caught on with a vengeance.

Yet as camera phones grow ever harder to escape, the questions become more pressing, too. Just how far should we go down the road of ‘sharenting’, as it is known? Ofcom suggests that as many as four in ten parents regularly upload family photos to social media, and even England’s Chief Medical Officer Dame Sally Davies has expressed concern. 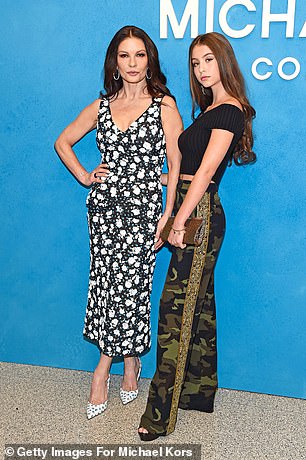 Last week she warned parents to be cautious about sharing pictures on public platforms, not least because children might not truly have consented. ‘When in doubt, don’t upload,’ she said.

Jules is more than happy to be a ‘mammarazzi’, however – and for good reason. ‘I presumed having children would be easy,’ she explains. ‘But it didn’t happen like that. I had six miscarriages.’

Then, after five years of trying, she fell pregnant again, and this time suffered terrible nausea.

‘I had extreme hyperemesis gravidarum like the Duchess of Cambridge. I spent almost the entire pregnancy in hospital, being tube-fed, and I’d lost more than two stone by the time they cut the cord,’ she says. ‘But I was thrilled to finally have a live baby.’

That was 18 years ago with Louis. Then, four years later, she went through exactly the same to have Alexa. ‘I call her my bonus baby – I can’t believe I’ve got her.’

With such precious babies, Jules took hundreds of photographs to document their lives. ‘Then, when Alexa was two or three, I started putting pictures on Facebook and later on Instagram.’

These days, it’s mostly Alexa who features online – Louis has become rather camera-shy since turning 18. ‘It’s lovely – friends I don’t see often have been able to watch her grow up and know her hobbies and what she’s into,’ explains Jules.

But what does her daughter think of her frequent photography? ‘I always check with Alexa before I post a photo of her,’ says Jules. 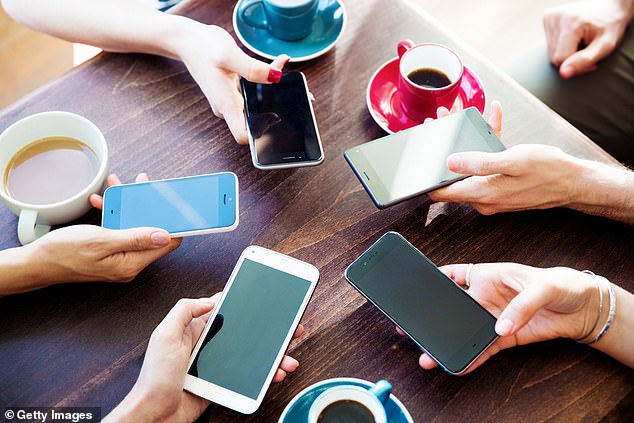 Then there are the ever-present concerns about the dark side of the internet. ‘I have 450 to 500 friends on Facebook,’ she says. ‘And if I’ve never had any interaction with someone who sends a friend request, they don’t get through. ‘I tend not to use the children’s names too much because of privacy – I call my son Teen Grump and my girl My Bonus Baby. I just feel safer doing this.’

Jules has every reason to be proud of her miracle babies, but it’s also true that her circumstances have been unusual. Why do other mothers seem so obsessive when it comes to pictures of their children?

‘It could be down to wanting everyone to see how wonderful they are,’ she says. ‘And a perhaps bit of sheep mentality, copying what others do online.

‘But it could also be a bit narcissistic. When you’re doing this, it’s helpful to ask yourself why you’re doing it. Do you truly think they’re wonderful and that you’re telling others so your child can see the reaction and gain confidence?

‘Or are people doing things like this because it’s feeding their own confidence – is it saying, “This is what I’ve produced, she’s a reflection of me and that means I did a good job and I have good genes.” ’

It’s even possible, Dr San argues, that some women post pictures of their children in response to their own sense of ageing: ‘It may make them feel better about themselves because they know they used to look like that.’

Shannon Whitlock, from Peterborough, began posting pictures of her two young sons on her Instagram account when she wanted to share recipes with others. The boys had just started weaning. Four years on, she’s a full-on mammarazzi, with a blog on which she regularly posts pictures of Henry, four, and two-year-old Archie. 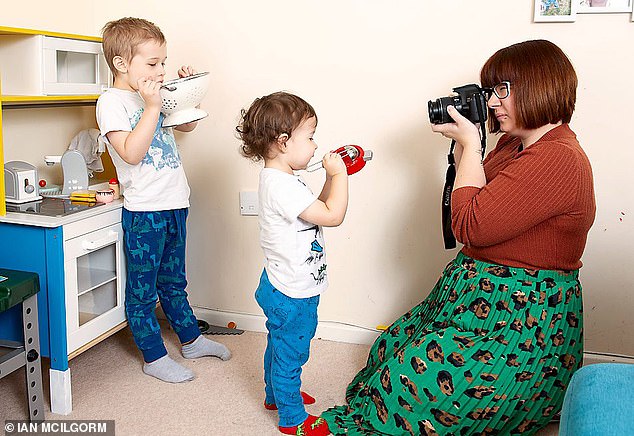 Shannon now has more than 1,000 photos of the boys on her phone.

‘I post on Instagram every day and do about two blogs a week,’ she says. ‘There’s definitely pressure to put pictures of your children on social media, especially when you’re a parenting blogger – there are so many out there now that you need to keep up,’ says the 24-year-old. But getting that perfect shot can be difficult when her boys won’t play ball.

‘I take a week’s worth of photos at the weekend when I’ve got my husband Gareth with me,’ she explains. But it can be tricky when the youngsters do not want to pose and sometimes Shannon has to resort to bribing them with treats.

‘Archie is very independent and he’ll run away’ she admits. ‘Henry is more negotiable – usually he’s OK with photos. And if he isn’t, I’ll say, “If you do this we might go to the cafe and you can get a cake”, or “We have to go the supermarket and we can get some sweets.”

‘He’s obsessed with toy cars so occasionally he’ll get a Hot Wheels car – which costs about £2 – for letting me take a picture. Sometimes it works, sometimes it doesn’t.’

Lauren Denby, 30, from Ashford, Kent, faces a similar battle. Her eldest son, Antony, is now ten and is starting to object to her ‘mammarazzi’ tendencies.

The mother of three has a staggering 2,000 images on her phone. ‘If we go on holiday, I’ll get pictures of the children in the evenings, in the sea and in the pool. At home, if we go out, I’ll stand them by the door for a picture. I post them on Facebook and Instagram usually a couple of times a week.’

Antony used to be her main subject as his brother Henry, four, hated having his picture taken. But now Lauren’s muse is daughter Penelope who, at one, is rather too young to object.

‘Antony will often pull a face, stick his tongue out or look moody, so I tell him to stop and let me take a picture. ‘If he smiles, I’ll put it up on social media.’ So why does she do it? ‘I’m just so proud of them and what they’d doing,’ says the beauty therapist, who takes four or five pictures a week and even more during the school holidays.

‘Most of my friends post photos of their children too. I love the comments I get about how handsome and how grown-up Antony is.

‘It makes you feel happy that people think that about your children.

‘My husband Chris is less keen. He keeps asking why I take so many pictures but I want the kids to be able to look back at them.’

He’s not the only one raising questions. ‘This is uncharted territory because social media use is developing so fast,’ says Janey Downshire, author and co-founder of Teenagers Translated, which runs courses for parents. 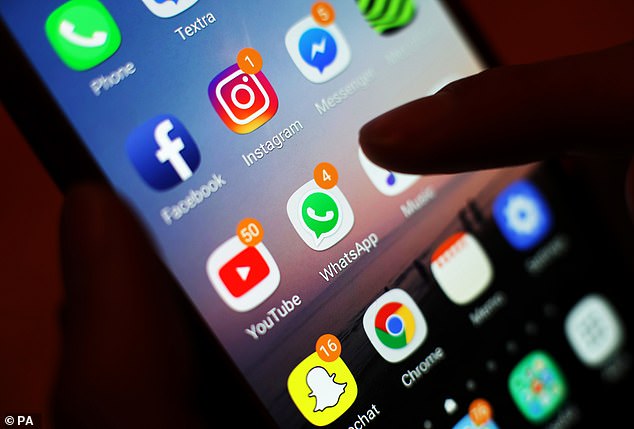 ‘Parents have to be very careful. The only way this could be a positive is if the child is old enough to consent, and parent and child are in complete agreement about what’s OK to post and what’s not.

‘What a parent might think is just a bit of fun, a teenager might disagree because they are more aware of the impact social media has on your future reputation.

‘So a parent has to be careful as posting pictures that could harm a young person’s development.

‘You have to think about how they’ll feel about it when they’re older. Video footage of young children having tantrums could come back to haunt that parent/child relationship.

‘You’re leaving yourself vulnerable as a parent to your child saying later in life that they don’t understand why you did it and it’s shaped their identity in a way they wouldn’t have chosen.’

Not that Laura Myers has any such concerns. She has uploaded so many photos of her two-year-old Sophia-Mae on Instagram that her daughter is now regularly asked to be a ‘brand ambassador’ and be pictured in clothing that she has been sent for free. ‘But that’s not why I started doing it,’ insists Laura, who has two older children – Lewis, 18, and Samuel, 11. ‘I do it for fun because I’m obsessive about taking pictures of her.’ 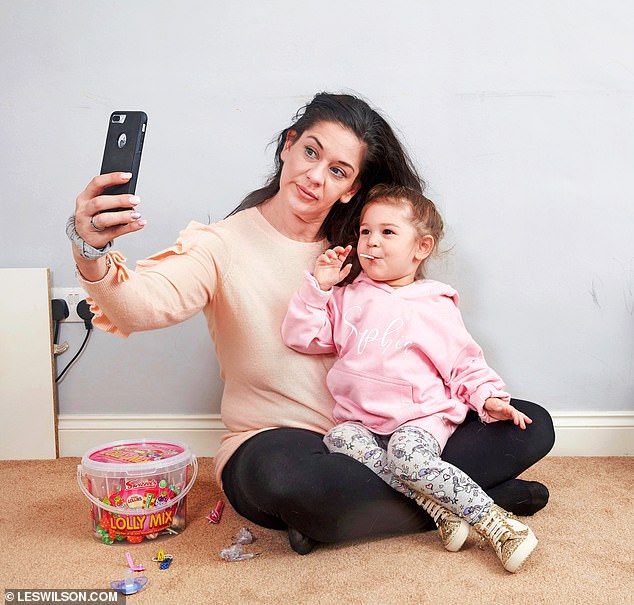 Sophia-Mae’s Instagram account began when she was nine months old and her devoted mum still uploads several images a week. Sophia-Mae has 60,000 followers.

‘It’s lovely when you get messages saying she’s beautiful,’ says Laura, from Ilford, East London, who keeps a whopping 4,000 images of her family on her phone.

‘It’s a lovely feeling to think you’ve produced her.

‘I don’t really have any concerns – except one guy messaged me to say he loved her and sent me a picture of her so I blocked him because it was a bit freaky. Now non-followers can’t see her.

‘I can get a lot of stick from people saying, “Why do you take pictures of a child?” But I’m not exposing her body, I’m only exposing her face.’

‘Sometimes she’s not in the mood and I’ll tell followers that she’s being grumpy. I posted a picture of her crying once with the message, “Anyone else got a child like this?” because I don’t want other mothers to think she’s perfect.

‘And I’d stop in a heartbeat if she didn’t want to do it.’