Man, 20, is shot dead by police after running towards an officer wielding a knife

Man, 20, is shot dead by police after running towards an officer wielding a knife and threatening self harm

A 20-year-old man was killed by police on Saturday morning after getting out of a car armed with a knife.

The man called police about 9am threatening self harm. A single officer was sent to a home on Tapleys Hill Road in Seaton, Adelaide, in response.

As the officer approached the home, the man was seen leaving in a silver Mercedes sedan with two women.

The policeman followed the trio, and when he pulled the car over, the 20-year-old emerged from the front passenger seat, wielding a knife.

The officer shot the man in the chest, causing injuries that would prove fatal.

Police allege they received a call from the man, 20, at 9am who threatened to self-harm and an officer travelled to the home in Tapleys Hill Road in Seaton, Adelaide’s west. The officer approached the house where the man was seen leaving in a car alongside two women known to him

‘The single officer fired a shot as he was retreating from the man who was allegedly armed with a knife. That shot caused critical injuries,’ Assistant Commissioner Scott Duval said to the ABC.

Police gave the man first aid before he was rushed to the Royal Adelaide Hospital in a critical condition, where he died later on Saturday.

No other people were injured and the two women who were accompanying the man are assisting the police.

The police did not confirm whether the man threatened the officer before he was shot and Assistant Commissioner Duval said he ‘did not have the full details.’

‘There will be a commissioner’s inquiry into this incident as well as a report for the coroner so at this stage I can’t comment on the officer’s actions.’ 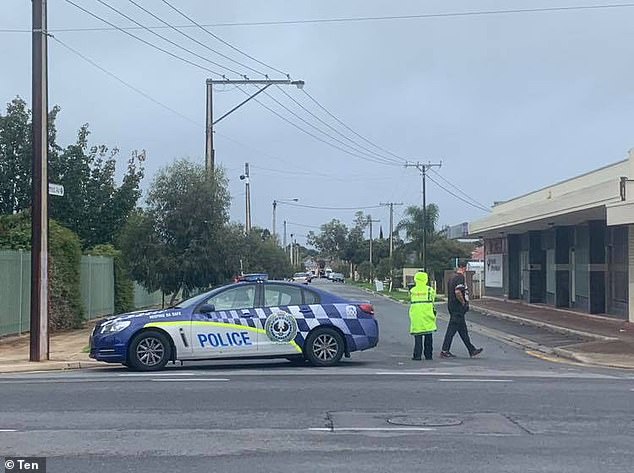 After the officer pulled over the man’s car on Green Avenue, near Alfred Avenue, he exited the vehicle wielding a knife. The officer shot the man and he later died. No other people were injured and the two women who were accompanying the man are assisting the police

Neighbours reported they heard gun shots after the man allegedly exited his vehicle wielding a knife.

Investigators from Major Crime, Western District CIB and Internal Investigation Section are currently at the scene where an investigation is underway.

Police have set up a crime scene near the corner of Green Avenue and Alfred Avenue close to the location of the knife and the spent round.