Man, 20, who was ‘dead for 20 MINUTES’ after being electrocuted is brought back to life

A 20-year-old Michigan man, dubbed ‘miracle man’ by hospital staff who saved him, was brought back to life after being clinically dead for 20 minutes.

Michael Pruitt had been working with his stepdad on a construction project at a home in Livonia on April 30 when a metal ladder he was carrying touched a live electrical wire.

Michael Pruitt, 20, from Taylor, Michigan, was dubbed ‘miracle man’ when hospital staff revived him after he had been clinically dead for 20 minutes on April 30. He is pictured at Beaumount Hospital 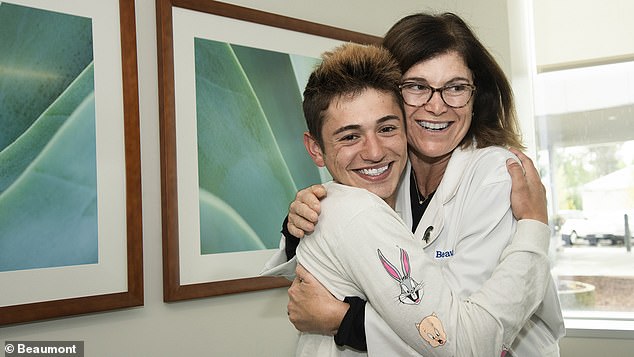 Pruitt pictured with Dr. Angel Chudler, the emergency room physician at Beaumount Hospital who helped resuscitate him after he was electrocuted

‘I remember being electrocuted while holding that ladder and shaking, and then nothing,’ Pruitt said.

The homeowner called 911 and started CPR, a move the hospital credited with making the later resuscitation possible.

It took around four minutes for paramedics to arrive. They attempted to revive him with the defibrillator while en route to the hospital, but he never regained a heartbeat in the ambulance.

‘They brought in this perfect young man who had no vital signs,’ said Dr. Angel Chudler, an emergency room physician at Beaumount Hospital Farmington Hills. 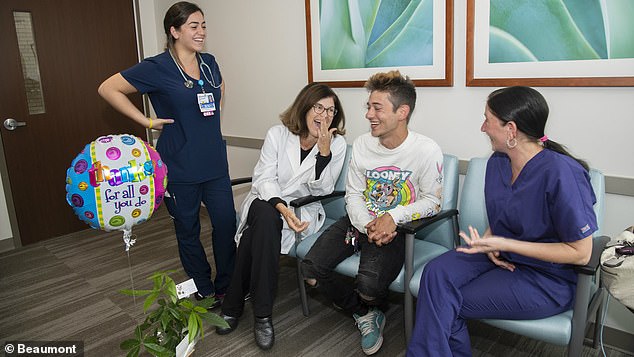 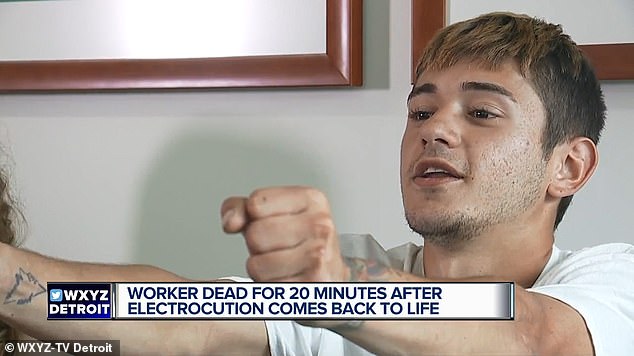 Pruitt told 7 Action News ‘I remember my arms just locking up’. He said being electrocuted was ‘like in the movies… it felt just like that, being shook like crazy’ 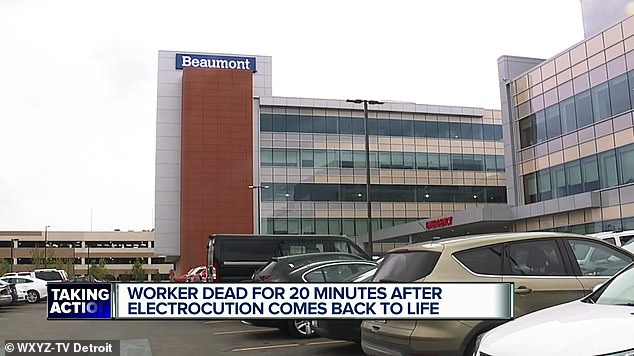 Despite a full 20 minutes with no pulse, the team of doctors and nurses at Beaumount Hospital refused to let him go

Doctors shocked the dead man’s heart again using a defibrillator, but nothing happened.

Dr. Chudler cranked up the defibrillator and shocked him again. His heart started beating within two minutes.

‘We upped the joules a bit. And you could just feel and see on the monitor that his heart rate was starting to come back,’ Dr. Chudler told 7 Action News. 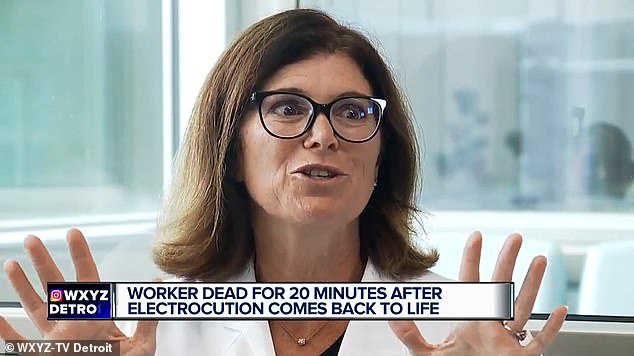 Dr. Angel Chudler, who helped bring Pruitt back to life, said paramedics ‘brought in this perfect young man who had no vital signs’ 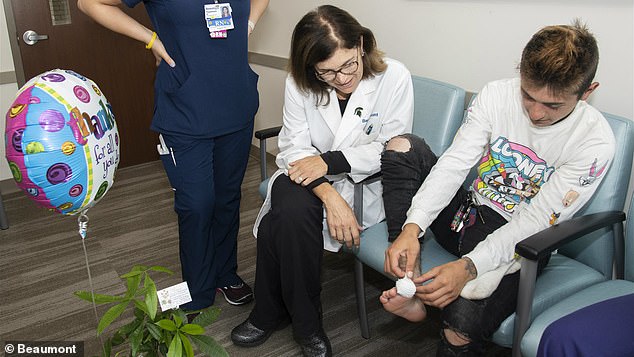 The only injury Pruitt sustained was in his toes, burned from the inside when the voltage electricity exited through his body 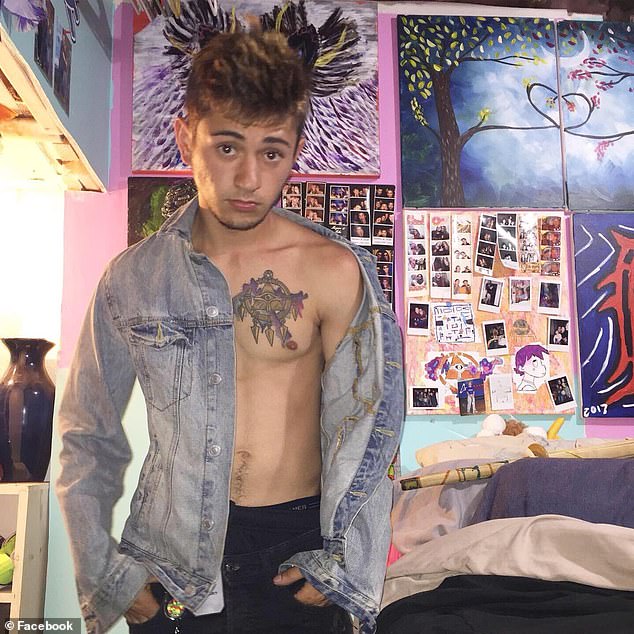 Pruitt got a new tattoo over his heart to honor the miracle: the sacred all-seeing eye of God inside a triangle in a Native American dream-catcher. He posted this photo on Facebook

‘When he became conscious again, he was like The Hulk, grabbing the railings and shaking the bed with huge strength. It took the entire care team to hold Michael,’ Beaumont clinical nurse Yasmeen Bachir, said in a hospital blog post.

Barbara Smith, the director of trauma services at Beaumont, told the blog that ‘Michael’s resuscitation is miraculous’.

‘In less than five minutes, brain cells start to die from lack of oxygen… He did not lose any brain function. It’s a testament to the importance of immediate continuous CPR to move oxygenated blood to the brain.’ 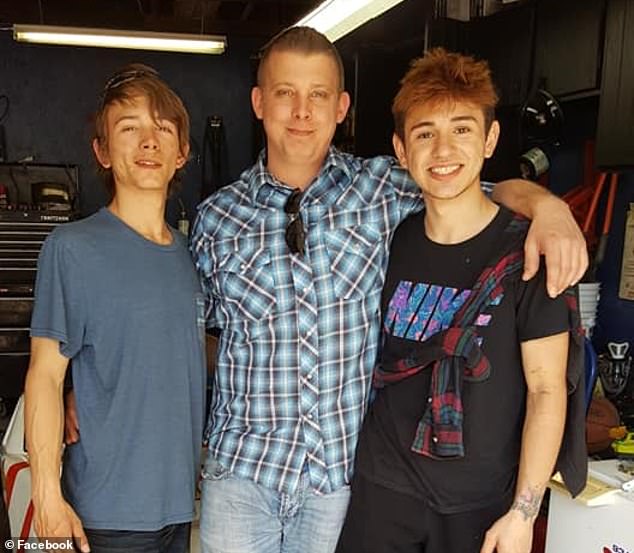 Pruitt’s mother Jillian, a rehabilitation tech at Beaumont Hospital, said she knew he was OK ‘when Michael made a sarcastic gesture when I asked if he had any other superpowers.’

‘My first-born had returned from the dead,’ the relieved mom added.

In most cases, the thousands of volts of electricity would have been lethal.

But the only injury Pruitt sustained was in his toes, burned from the inside when the voltage electricity exited through his body.

He was discharged from hospital after five days.

‘When my folks ask me to take out the garbage now, I’ve been trying to use my painful big toes as an excuse not to do it,’ Pruitt said.

He said he got a new tattoo in honor of his recovery, an image of an all-seeing eye over his heart.

‘When people ask if my hair spikes naturally, now I tell them it’s because I was electrocuted,’ Pruitt said.

Officials said recovery from electric shock depends on the nature and severity of the injuries and the percentage of the body surface area burned is the most important factor.

Electrical damage to the brain could result in a permanent seizure disorder, depression, anxiety or other personality changes. An electrical current can also cause internal damage, cardiac arrest or other injuries, according to experts.

Pruitt, who ironically likes the TV show ‘The Walking Dead’ on Facebook, is now fully recovered and back to work.