Man, 23, is one of Britain’s youngest ever patients to be diagnosed with dementia AND Parkinson’s

A 23-year-old man is thought to be one of the youngest adults in the UK to ever be diagnosed with both dementia and Parkinson’s.

Jordan Adams discovered he has inherited a gene that causes both early onset frontotemporal dementia and Parkinson’s from his mother Geri last month.

Although the entrepreneur, from Redditch, shows no signs of either illness now, doctors have warned him he could lose the ability to walk, talk and even eat at any time.

Like his mother who passed away aged just 52, Mr Adams is expected to die in his 50s.

Refusing to be defeated, he plans to have his sperm screened for the faulty gene so that he and his girlfriend Lucy Thomas, 21, can start a family before his symptoms develop.

He has also put together a bucket list that includes travelling to Hawaii, buying a house and skydiving.

Jordan Adams, 23, is thought to be one of the youngest adults in the UK to be diagnosed with both dementia and Parkinson’s disease. He inherited a gene for the disorders from his mother 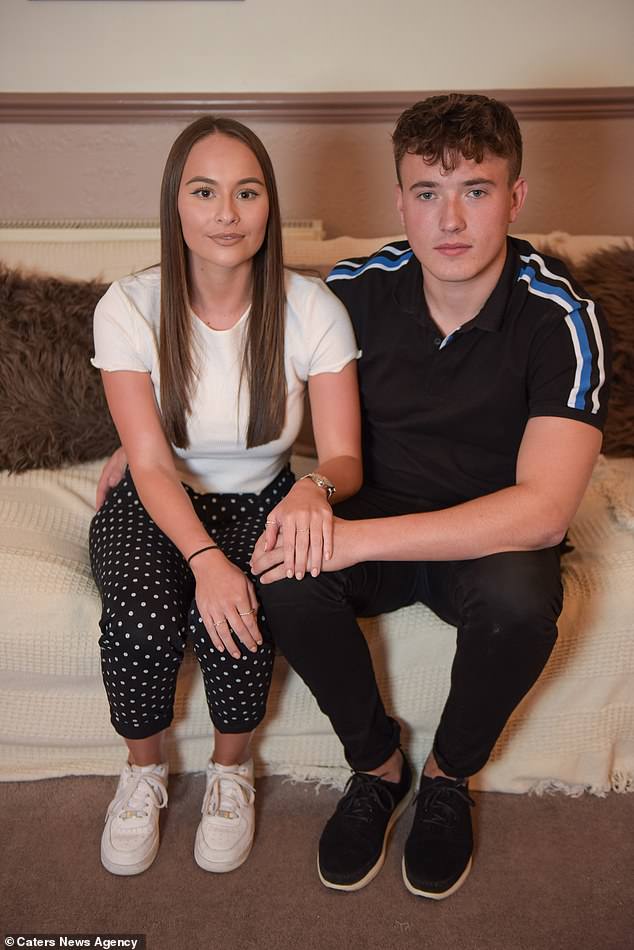 Doctors have warned Mr Adams he could lose the ability to walk, talk and even eat. Despite this, the entrepreneur hopes to start a family with his girlfriend Lucy Thomas (pictured) 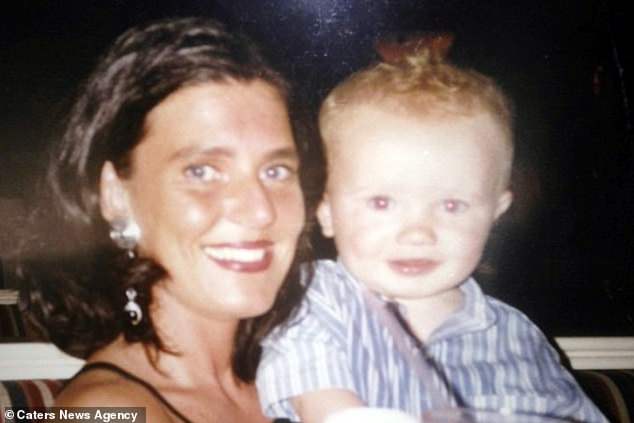 Mr Adams’ mother Geri (pictured with her son as a child) was diagnosed with both dementia and Parkinson’s disease in 2010. After battling the disease for six years, she died aged 52

Mr Adams and his sister Kennedy, 25, decided to be tested for the faulty MAPT gene after watching their mother’s health deteriorate over six years.

After three months of grueling blood tests and doctors’ consultations, Mr Adams was told he had inherited the faulty gene on September 12. Kennedy was given the all-clear.

Speaking of his devastating diagnosis, Mr Adams said: ‘We had been in the waiting area for what seemed like hours – it was only 10 minutes but it felt like an eternity.

‘As soon as I walked into the room I knew it wasn’t a positive result. Nobody can prepare you for that.

‘If there are no advancements then I’ll have a shorter life than most. It’s like a death sentence.

‘It’s very hard to explain. We’re all dealt cards in life and I was just incredibly unlucky.’ 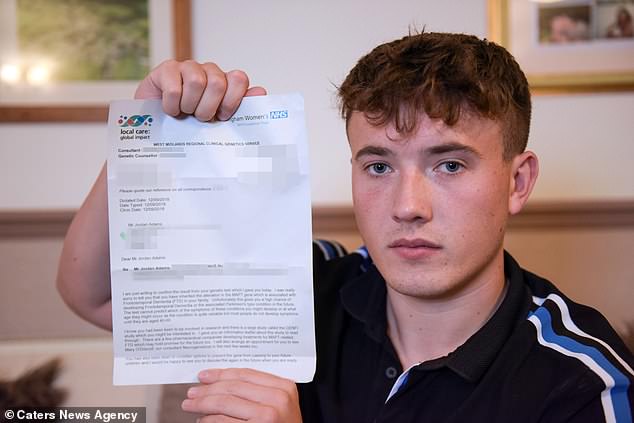 After watching his mother’s health deteriorate, Mr Adams underwent three months of grueling blood tests and doctors’ consultations to determine if he also carried the same faulty gene. He is pictured with the letter confirming his diagnosis on September 12 this year 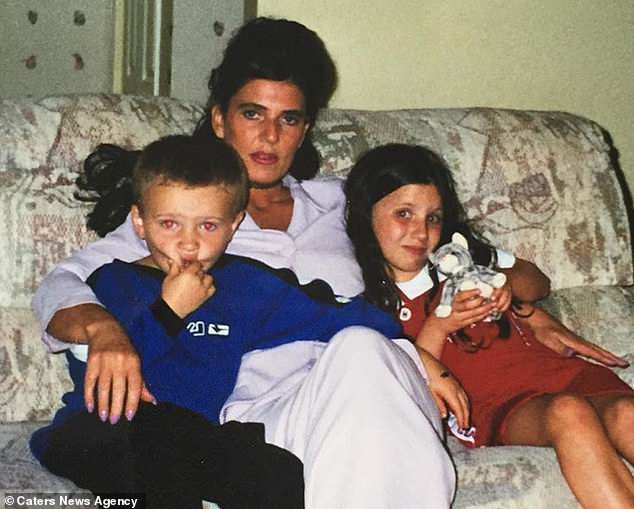 Geri (pictured with Mr Adams and his sister Kennedy) first developed symptoms in 2006 when she started acting ‘out of character’. ‘One Saturday she went to pick up Kennedy from school but it was a weekend. She seemed to lack compassion which was a huge change,’ he said

WHAT IS FRONTOTEMPORAL DEMENTIA?

Frontotemporal dementia (FTD) affects the lobes of the brain behind the forehead, which deal with behaviour, problem-solving, planning and emotions.

The left temporal lobe is involved in the meaning of words and the names of objects.

FTD occurs when nerve cells in these lobes die and the pathways that connect them change.

Symptoms are different from just the memory loss that is associated with Alzheimer’s disease.

FTD is rare, making up less than five per cent of all dementia cases.

However, it is one of the most common forms of the disease in people under 65.

Sufferers are usually aged between 45 and 65 at diagnosis.

The rate at which FTD progresses varies greatly, with life expectancies ranging from two years to more than 10 after diagnosis.

As it progresses and more of the brain becomes damaged, symptoms often become similar to those in the late stage of Alzheimer’s.

These may include memory loss and patients relying on others to care for them.

Around 10-to-20 per cent of FTD patients also have a motor disorder that affects their movement.

This can lead to twitching, stiffness, slowed movement and loss of balance or co-ordination.

In later stages, such patients may have difficulty swallowing.

Around one-third of FTD patients have a family history of dementia.

And the condition is often caused by an inherited faulty gene from one of a patient’s parents.

Treatment focuses on helping a person live well by easing their symptoms.

This may include counselling or a speech and language therapist.

Mr Adams saw the full impact of both dementia and Parkinson’s while caring for his mother, who gradually lost the ability to talk, walk, eat and even breathe by herself.

Her family first noticed something was wrong in 2006 when she started acting out of character, however, she was not diagnosed until 2010.

‘Mum was full of love and very much a people person,’ Mr Adams said.

‘No one had a bad word to say about her, she was very kind and lovely.’

Speaking of before she was diagnosed, he added: ‘We’d noticed irregularities in her behaviour.

‘I remember one Saturday she went to pick up Kennedy from school but it was a weekend.

‘Her character changed from being a loving woman and she became quite cold.

‘She seemed to lack compassion which was a huge change from when she’d covered us in love.

‘She slowly got stripped of her communication. She couldn’t talk a lot and then she began to lose her mobility and couldn’t go out alone.

He added: ‘As the disease progressed she lost the ability to walk and care for herself and for the last 18 months she was bedridden. It was heartwrenching.’ 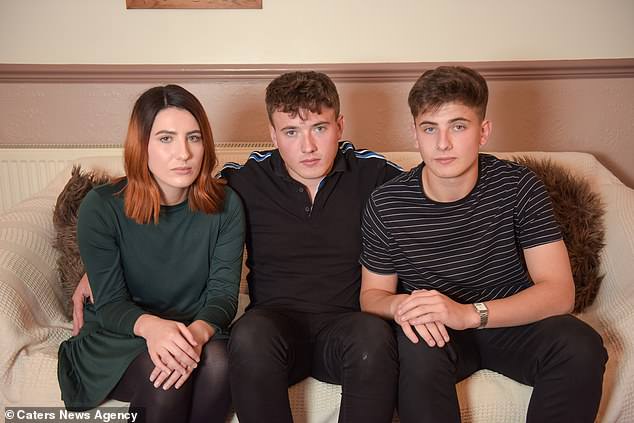 Kennedy (left) also got tested for the gene but was given the all-clear. ‘When I found out he had the gene, I said if I could have had it instead then I would,’ she said. Also pictured are Mr Adams (centre) and his brother Cian, 18; it is unclear if he inherited his mother’s faulty gene 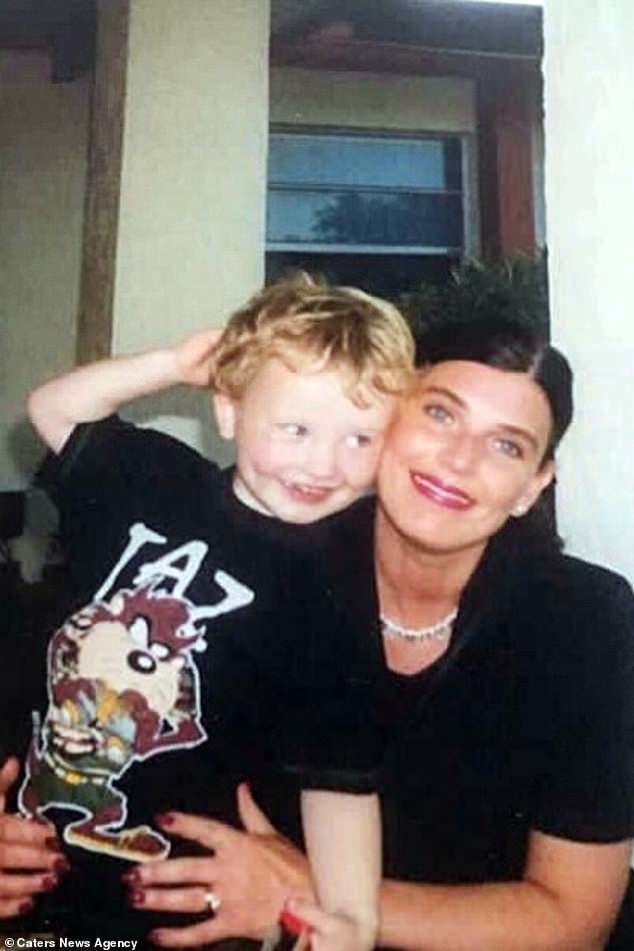 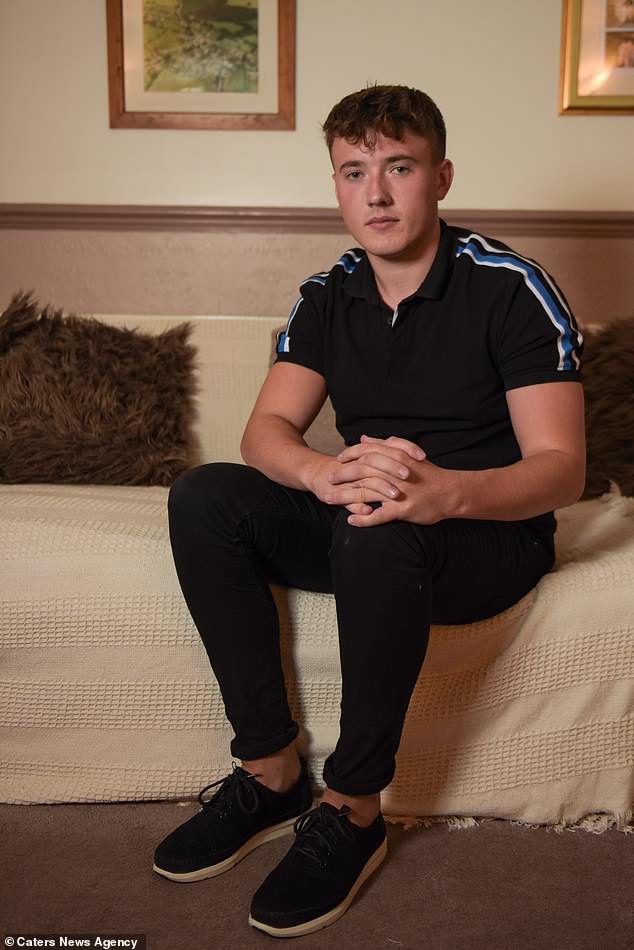 Refusing to be defeated by his diagnosis, Mr Adams claims the news has given him a ‘license to live’. He adds learning his time is short has made him more grateful for what he has 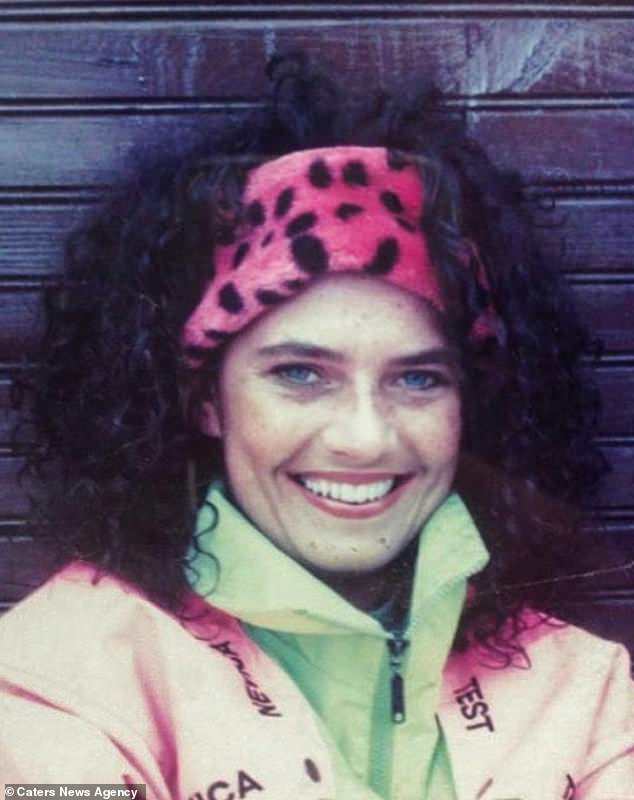 Once vivacious and independent, Geri gradually lost her ability to walk and talk. For the last 18 months of her life, she was bedridden, which Mr Adams describes as ‘heartwrenching’

Despite the initial shock of his diagnosis, Mr Adams and his girlfriend are still planning a full future together.

The couple are considering IVF when they decide to start a family due to the process allowing doctors to screen Mr Adam’s sperm for the dementia-carrying gene.

‘I feel like the diagnosis is actually a licence to live,’ he said.

‘It’ll make me step back and appreciate the bigger picture. It’s going to allow me to make choices to live a fulfilled life.’

Miss Thomas added: ‘We’ve decided that it’d be probably best to have children first and then get married.

‘We know it’s different to how most people would it do but it’ll give Jordan more time with his kids.

‘It’s hard to deal with knowing he won’t be there one day but it’s important to retain perspective.

‘We will have a life together despite everything.’

Kennedy added her brother has shown tremendous courage since he was given the shattering diagnosis.

‘This disease is hereditary, aggressive and rare,’ she said.

‘I’ve been told you have more chance of winning the EuroMillions than getting it.

‘But Jordan’s been incredible, and he’s not going to let it destroy him.

‘When I found out he had the gene, I said if I could have had it instead then I would.

She added: ‘We think Jordan is one of the youngest people to be diagnosed with the conditions in the UK that we know of.

‘It’s like you’ve got a black cloud over you but you don’t know when the storm will come.

‘He has got time but we just don’t know how much – he has no symptoms yet, but it could start tomorrow. He won’t get it when he’s old and grey, but when he’s young and fit.’

Kennedy worries the disease will eventually strip her brother of his personality.

‘He won’t have likes and dislikes and he won’t be able to hold a conversation,’ she said.

‘Eventually he won’t be able to feed himself and walk.’

‘How can this happen to one family? When will it stop? It seems never-ending.’