Man, 24, is left unable to smile after fluid-filled cyst PARALYSED his face

A man has been left unable to smile after being born with a rare condition.

Atholl Mills, 24, from Scotland, was diagnosed with cystic hygroma at birth – a fluid-filled sac that results from a blockage in the lymphatic system.

Due to the nature of his condition, he had to have surgery as soon as he was born, and his parents had to say their goodbyes as his chances of survival were low.

But now – after countless operations – he is defying the odds and living a successful, independent life.

On-going: His condition caused his left ear to grow into a different shape and size, which meant that he had to undergo another surgery in 2007 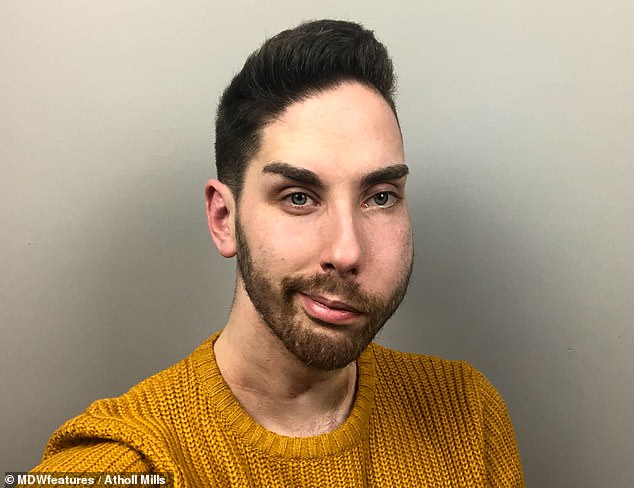 Defying the odds: Atholl Mills, 24, from Scotland, was diagnosed with cystic hygroma at birth – a fluid-filled sac that results from a blockage in the lymphatic system 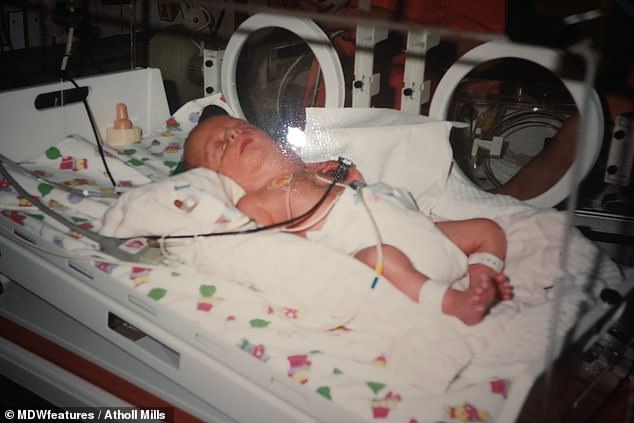 Difficult start: Mr Mills pictured shortly after his birth, which saw him whisked away into the operating theatre for a gruelling five-hour procedure

Mr Mills said: ‘My mum was told at one of her scans that there was something wrong.

‘She was offered the opportunity to abort only me and keep my twin sister, but my mum decided against that. She always knew that giving me up was never an option for her.

‘When I was born my parents had a couple of minutes with me before I was rushed to hospital and was told that my chances of survival were very slim.’

During a five-hour operation, doctors had to cut from the right side of his neck round to the left side.

They also cut his left facial nerve to remove more of the cysts; this resulted in him developing facial palsy, a condition that causes a permanent weakness or paralysis of the facial muscles.

Over the years he has faced negative reactions to his look which resulted in him developing so much anxiety, that he would lock himself up in his house, afraid to be mocked by strangers.

Mr Mills said: ‘It was very difficult; being young I didn’t really have a concept that anything was wrong with me but as I got older, I began to realise that there was something different about me and that was hard to deal with.

‘I spent a lot of my childhood wishing that I was either someone else or that I would wake up one day and everything would just be fixed.’ 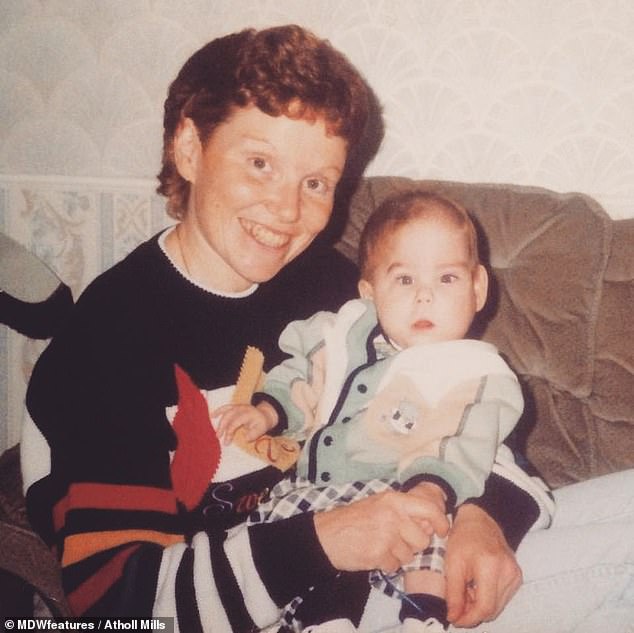 A mother’s love: Mr Mills pictured here as a baby with his mother, who refused to take medical advice and abort her son – a decision which proved to be wise 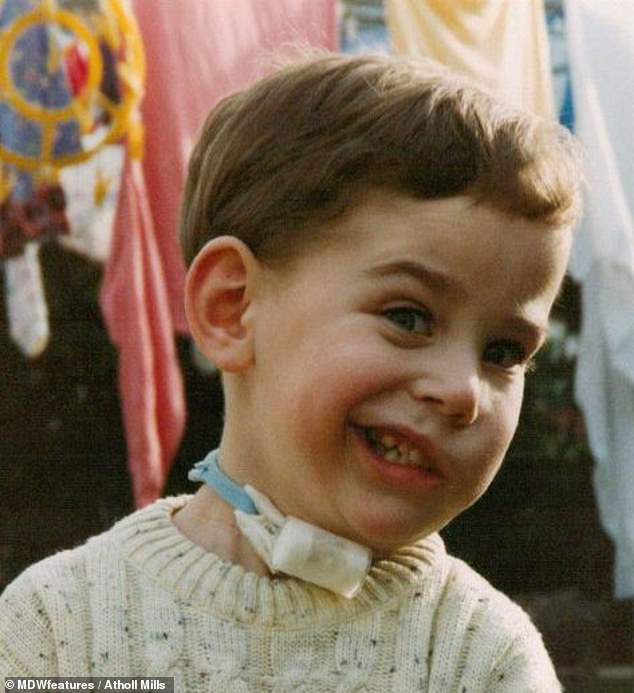 Difficulties: Mr Mills pictured when he was around two-years-old following one of many procedures to alleviate the cysts growing in his face

‘Living in a small village meant that bullying didn’t really happen for me and everyone was really accepting. But venturing out further often meant that I was stared at or pointed at.

‘It impacted my confidence a lot. It still does today because it really is an ongoing battle. There are good days and bad days.’

His condition caused his left ear to grow into a different shape and size, which meant that he had to undergo another surgery in 2007 to have them pinned back and have his left ear completely reconstructed.

In 2013 he underwent a 10-hour surgery to move a muscle from his leg to his face, which meant that whenever he clenched his teeth, the muscle contracted and pulled the left side of his face upward to give him more of a smile. 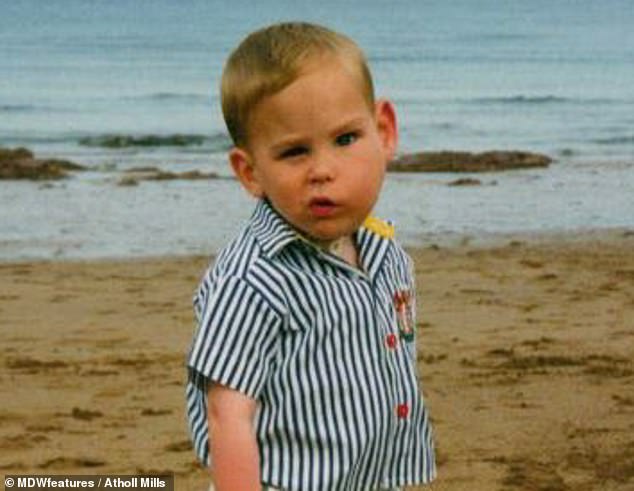 His condition caused his left ear to grow into a different shape and size, which meant that he had to undergo another surgery in 2007 to have them pinned back and have his left ear completely reconstructed (pictured aged two) 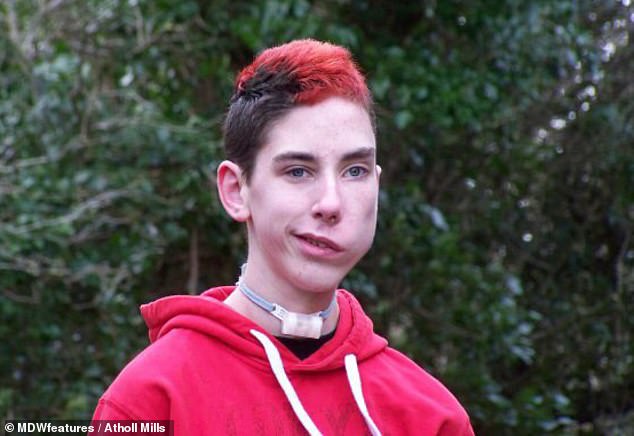 Intense: In 2013 he underwent a 10-hour surgery to move a muscle from his leg to his face, which meant that whenever he clenched his teeth, the muscle contracted and pulled the left side of his face upward to give him more of a smile 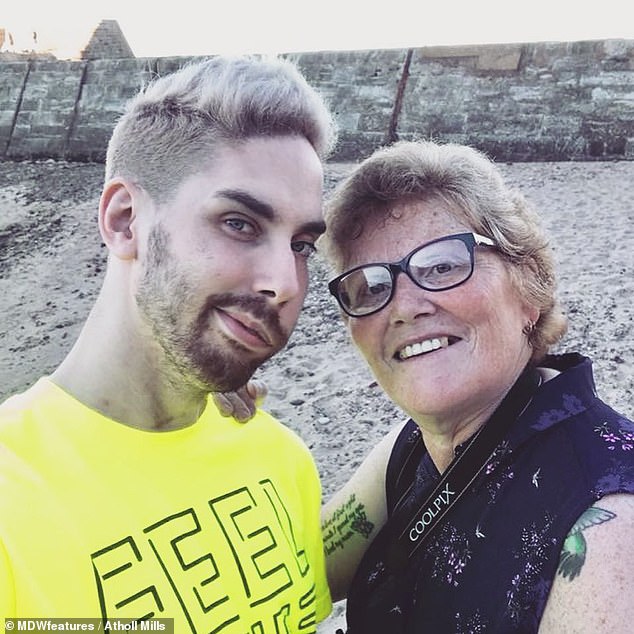 Today: Mr Mills pictured now with his mother (R), who has encouraged him to be confident in overcoming the tribulations he has faced since birth

What causes a cystic hygroma and can it be prevented?

A cystic hygroma forms when the lymph vessels fail to form correctly during the first few weeks of pregnancy.

It cannot be prevented as it occurs so early in pregnancy, usually before the pregnancy is confirmed.

They occur in approximately one per cent of children and can affect children of any race and both boys and girls.

It wasn’t until 2011, when he looked at himself in the mirror after an incident on the train, that he decided to look at himself differently.

He began posting videos on YouTube and pictures on social media, which helped him grow in confidence.

However, he has since changed his perception of himself and says that his more confident attitude has helped him when dating.

‘There was an incident where I was on a train and someone pointed at me and said “look at that freak” he was about the same age as me and with a group of friends,” he said.

‘In addition to that, the train was also packed, and everyone was looking at me. I remember feeling so low after that and I’ve never forgotten about that day. But it was also the day I realised that something needed to change.

‘After the incident on the train I really looked at myself in the mirror and I degraded myself. But then I realised that I wouldn’t let someone else say these things to me or a friend, so why was I allowing myself to say it?

‘It was then I made it my mission to stand in front of the mirror once a day and compliment myself in some way or another.

‘Slowly but surely my confidence grew, and I realised that if I looked for someone to look at me or say something about me, I would find it.’

He added: ‘So, I just stopped doing that whenever I went out and I focused on what I was doing with my family or friends and my confidence just grew and grew. I still have a way to go but I’m so far removed from where I was about seven years ago.

‘Starting my YouTube channel was also a major help in gaining confidence because I was able to see that the way I looked was only a small part of who I am because so many people loved me because of my personality. Always be yourself, no matter what anyone else thinks. The right people will always find their way to you.

‘I also want to show others who may have a child with cystic hygroma that it isn’t all doom and gloom because I was told when I was younger that I would never talk, walk or live an independent life.

‘But here I am, twenty-four-years-old; I can talk, walk, drive and I’ve even graduated from university.’