Man, 28, is charged with outraging public decency by allegedly urinating on memorial to Keith Palmer

A 28-year-old man accused of urinating on the memorial to PC Keith Palmer, who was stabbed to death in the Westminster terror attack in 2017, has been charged with outraging public decency.

Andrew Banks, of Stansted, Essex, was charged by police on Sunday night and will appear in custody at Westminster Magistrates’ Court on Monday. 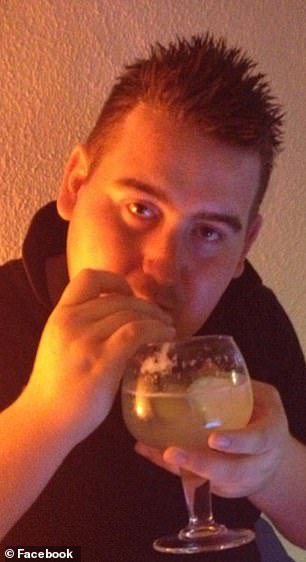 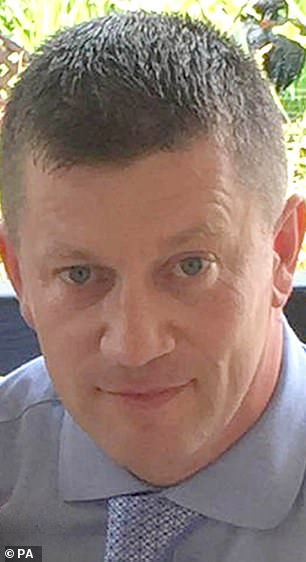 Andrew Banks, pictured left, will appear in court on Monday having been charged with outraging public decency, as he was accused of urinating on the memorial for PC Palmer, pictured right

Scotland Yard said previously that a man was arrested in Essex after presenting himself at a police station.

The charge came after a photograph of the ‘appalling and shameful’ act was widely shared on social media yesterday as violent clashes between far-right protesters and police took place in central London.

Speaking in response to the image, Metropolitan Police Commander Bas Javid said: ‘We are aware of a disgusting and abhorrent image circulating on social media of a man appearing to urinate on a memorial to PC Palmer.

‘I feel for PC Palmer’s family, friends and colleagues. We have immediately launched an investigation and will gather all the evidence available to us and take appropriate action.’

Banks, of Stansted, Essex, was branded a ‘stupid plonker’ by his father before being charged by police.

David Banks told The Sun: ‘Sometimes young lads get a bit desperate. Andy picked a stupid place to go to the toilet.

‘He’s devastated. He can apologise for being a stupid plonker. But he’s not the first person to have done that and I don’t suppose he’ll be the last.’ 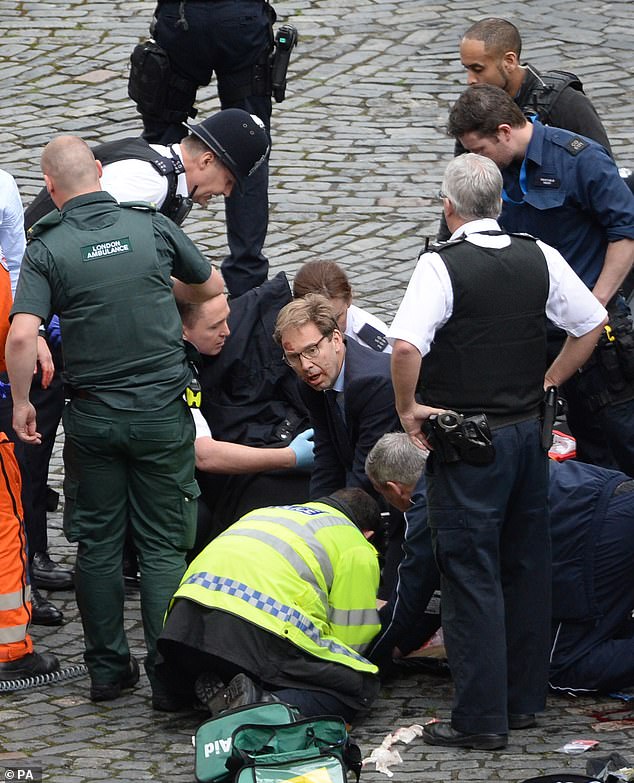 MP Tobias Ellwood, who rushed to help give first aid to PC Palmer after the incident, shared his disgust at the shocking image during the violent clashes in the capital on Saturday

Several politicians last night expressed their disgust at the act and the Met Police Federation called for the man to be jailed after he was snapped during violent clashes between far-right protesters and police in central London yesterday.

Home Secretary Priti Patel branded the incident as ‘absolutely appalling and shameful’, criticising those involved for the ‘shameful scenes’ in Westminster Square.

PC Keith Palmer was stabbed to death while guarding the main vehicle entrance — Carriage Gates — by terrorist Khalid Masood on March 22, 2017. He was awarded a posthumous George Medal for his bravery in confronting the killer.

Among those shaming the man is MP Tobias Ellwood, who gave first aid to the police officer as he lay dying outside Westminster.

He took to Twitter to share his disgust at the shocking photograph, describing his actions as ‘abhorrent’.

Speaking to BBC News, he said: ‘I’m really saddened to see this, in fact disgusted, it’s one of the most disturbing images I’ve seen.

‘We are going through a very difficult period of self-reflection here, quite rightly for us to look back and have a long overdue debate of our complex past and perhaps be more aware and critical of our own history.’ 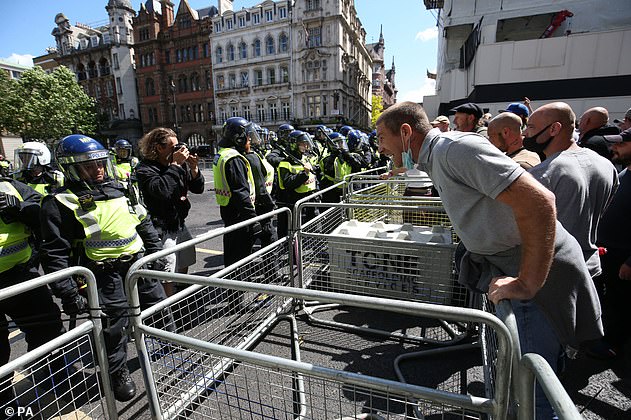 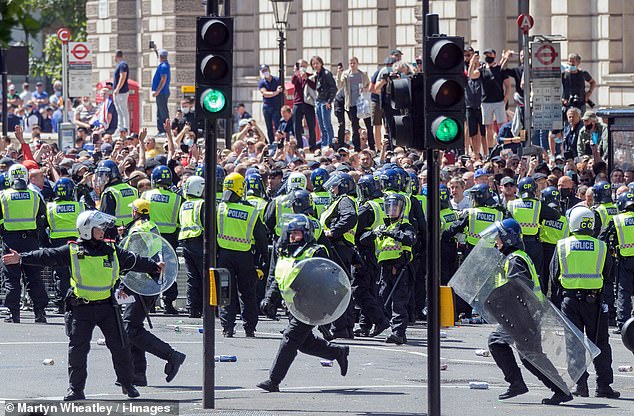 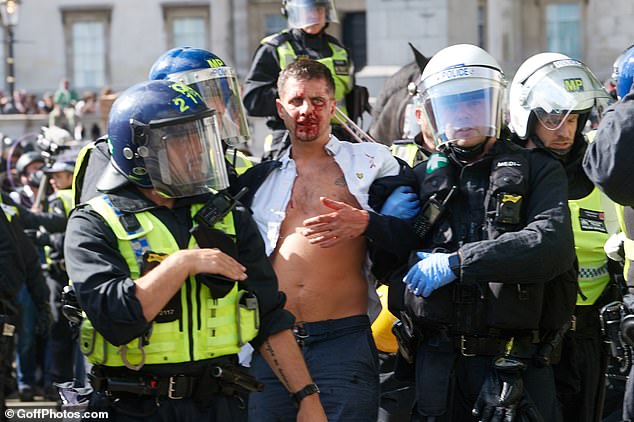 A man (pictured) believed to be a Tommy Robinson supporter, was one of two men chased by angry crowds on Saturday

He continued: ‘But the minority far-right groups wanting to come to London on the pretext of defending monuments, and yet we see monuments such as this being treated in this way, shows how far this generation still has to go.’

When asked whether he thought the urinating man may not have noticed the memorial, Mr Ellwood said: ‘I don’t agree with that at all.

‘This is the gates of Westminster, the most iconic symbol of democracy in the world next to a monument for PC Keith Palmer. He was fully aware of what he was doing, he should step forward and apologise.

‘These images are seen across the world, they will damage Britain’s reputation. It will make us look like we are not in control.’

He agreed with the Home Secretary’s comments of using the full force of the law against the unruly protesters, adding: ‘We must absolutely be firm on these people who choose to come to London and defend these statues but actually come here on the pretext of attacking the police and pursuing other agendas.’

Home Secretary Priti Patel condemned the ‘desecration’ of the memorial: ‘We are in an unprecedented public health emergency and I have said every single day, as have the police around the country and in London, that these protests, these gatherings, are illegal and we have been discouraging them.

‘Secondly, we have seen a small minority behave in extreme thuggery and violent behaviour today. 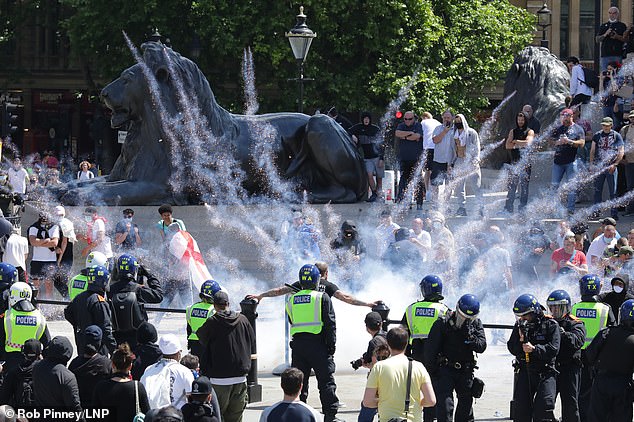 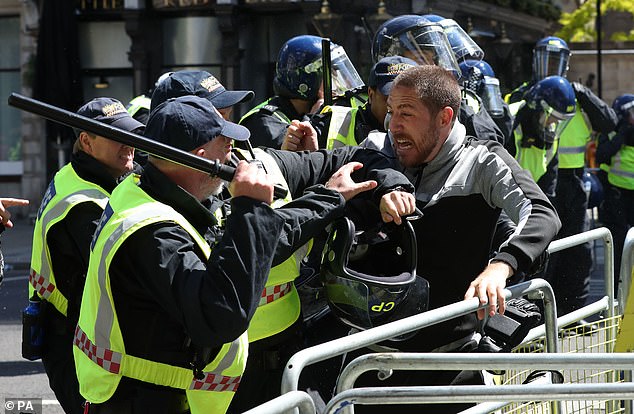 Police are confronted by protesters in Whitehall near Parliament Square, London, during a protest by the Democratic Football Lads Alliance against a Black Lives Matter protest

‘That is simply unacceptable and the individuals that are basically putting the safety of our police officers and the safety of the public at risk will expect to face the full force of the law.

‘We have seen some shameful scenes today, including the desecration of PC Keith Palmer’s memorial in Parliament, in Westminster square, – a man that gave his life to protect people – and quite frankly that is shameful, that is absolutely appalling and shameful.

‘And I think, you know, my final remark very much is that we live in a tolerant country but racism, any form of intolerance and violence is simply not acceptable.’

The Father of the House of Commons, Sir Peter Bottomley, added the protester should be ‘ashamed’.

Ken Marsh condemned the ‘disorder and unruliness’ witnessed at the far-right protests in London on Saturday.

He said: ‘It’s horrendous. The man urinating next to Keith Palmer’s memorial is disgusting.

‘How can a human being behave like that? I don’t get it, it’s beyond belief.

‘A faction of people today only had one intention – to be violent and unlawful, they didn’t come here to protect the statues, it’s just disorder and unruliness. 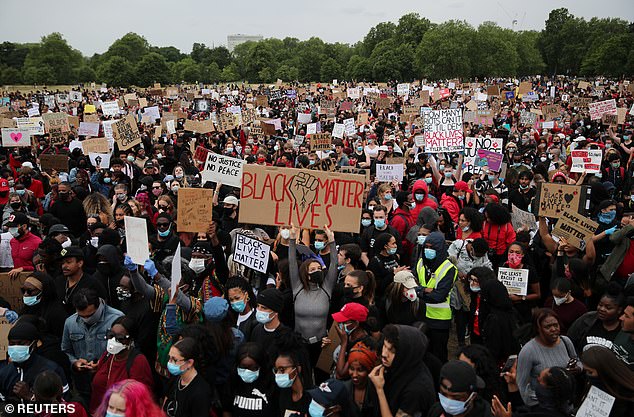 ‘I suggest serious custodial sentences in relation to assaults on police and others, criminal damage and urinating next to the memorial of heroes.’

Hundreds of far-right and pro-statue protesters gathered in the capital on Saturday morning in anticipation of a Black Lives Matter demonstration later in the day.

Several hundred demonstrators, mostly white men, attended the protest organised by far-right groups, including Britain First, which claimed they wanted to protect statues such as Winston Churchill from vandalism.

Shards of glass were strewn along the streets close to the Cenotaph on Whitehall after bottles were thrown at police officers clad in riot gear.

The violent scenes are in contrast with peaceful demonstrations that took place at Hyde Park and Marble Arch by anti-racism protesters in support of the Black Lives Matter (BLM) movement.

A spokesman for Metropolitan Police said tonight: ‘A man has been charged following an incident during the protests in central London on Saturday, 13 June.

‘Andrew Banks – 28 of Stansted, Essex has been charged with outraging public decency.

‘He will appear in custody at Westminster Magistrates’ Court on Monday, 15 June.

‘This follows an incident where a man was seen to apparently urinate by the memorial dedicated to PC Keith Palmer.’