Man, 32, ambushed by group of men in the carpark of a Sydney McDonald’s is found unconscious in a pool of blood with critical head injuries

A 32-year-old man has been left fighting for life after a brawl in a McDonald’s carpark.

Police were called to the fast food outlet in Penrith, west of Sydney, about 1.30am on Sunday, where they found the man unresponsive and suffering a head injury.

Pictures from the scene show a pool of blood in the carpark, and a bag, jacket and spilled box of chips nearby.

Officers were told the man was hurt during a fight in the carpark with a group of men, all who fled the scene before police arrived.

The 32-year-old was taken to Westmead Hospital.

A second man, whose age is unknown, was also found in the car park with minor facial injuries and was taken to hospital.

A spokeswoman for NSW Police told Daily Mail Australia the men were known to each other.

In an unrelated incident which took place in the vicinity of the McDonald’s carpark, an officer was allegedly assaulted by two men.

The sergeant suffered cuts to his face and was also taken to hospital for treatment.

The two men, both aged in their 20’s, were arrested at the scene and taken to Penrith Police Station.

They are assisting police with their inquiries. 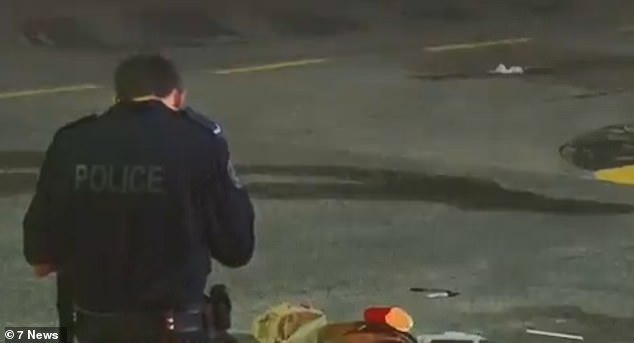 Police found the 32-year-old unconscious, lying in a pool of blood, when they arrived about 1.30am on Sunday