Man, 55, killed after being gored by a bull at annual festival in Spain

Man, 55, killed after being gored by a bull at annual festival in Spain – the first in the country since the start of coronavirus pandemic

By Natalia Penza For The Mailonline

A 55-year-old man has died after being gored by a bull at a festival in Spain – marking the first death of its kind in the country since the start of the Covid pandemic.

The animal was filmed Saturday lifting the reveller in the air on the end of its horns and dumping him on the ground as shocked onlookers took shelter in a shop doorway just a few feet away.

Other party goers in Onda, in the eastern province of Castellon, tried to entice the bull away to stop it attacking the injured man again as he lay unconscious on the ground.

He was rushed to hospital where he was pronounced dead after haemorrhaging blood from a gore wound in his left thigh near to his groin which had perforated his femoral artery.

Onda town hall officials announced they were suspending the rest of the night’s events when they learned he had lost his life.

People run in front of the bulls during the first running of the bulls after coronavirus Covid-19 restrictions were lifted, at Tafalla village, Navarra, Spain on 23 October 2020. A participant died at a separate festival in Onda, in the eastern province of Castellon

The gored man, who came from the nearby town of La Vall d’Uixo, has not yet been named.

Footage of the horror moment showed him standing still in front of the bull as it charged him.

The man, who was wearing a white baseball cap, red top and black trousers, was turned over in the air by the animal and crashed down onto the pavement on his head and back.

He was given emergency treatment by a doctor at the scene before being taken by ambulance to Hospital de la Plana in nearby Villarreal where he was pronounced dead.

A commentator for a local TV station, which is thought to have broadcast the incident live, could be overheard saying: ‘We’ve had quite a strong somersault here.

‘Let’s hope it’s nothing serious but it looks as if he’s lying motionless.’

The incident happened during the Fira de Onda, an annual festivity where bulls are let loose on the streets which the regional government describes on its website as an ‘excuse for celebration.’

The running of the bulls, where revellers race through the streets like in the famous San Fermines event in the northern Spanish town of Pamplona, form a central part of the festivities.

The Fira de Onda festival was cancelled last year because of the coronavirus pandemic.

Saturday’s fatal bull goring has been described as the first of its kind in a Spanish festival involving the animals since the start of the health crisis. 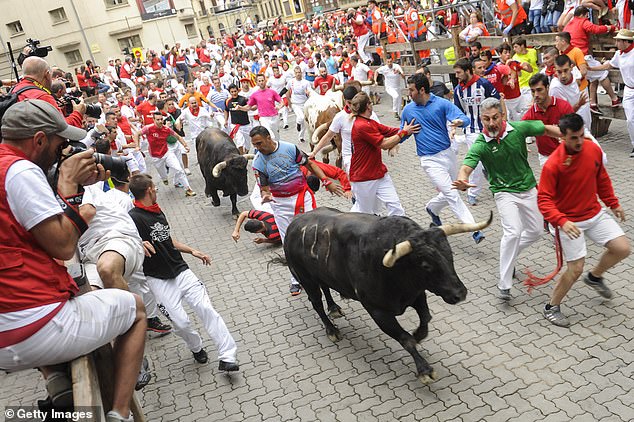 Onda Town Hall confirmed in a statement after the incident: ‘Due to the death of a man this afternoon and as a sign of respect and show of condolence, the rest of the programmed night-time events have been suspended.

‘The Fira de Onda takes place during the last week of October when Onda celebrates its patron saint festival.

‘A religious procession and the bull events are the biggest draws.

‘Before the coronavirus pandemic several revellers were gored to death every year at Spanish festivals involving bulls being let onto the street including the Pamplona-style ‘encierros.’

In 2015 seven people died between the start of July and the middle of August.