Man, 70, is arrested in 1980 cold case murder of a Navy pilot’s wife – as it emerges he is also the adoptive father of a girl, 14, who disappeared 30 years ago after accusing him of sexual assault

Police have arrested a 70-year-old man for the cold case murder of a 25-year-old woman found dead at her home in 1980.

Dennis Bowman, who now lives in Michigan, was arrested Friday on suspicion of murdering Kathleen Doyle at the home she shared with her Navy pilot husband in the city of Norfolk, Virginia, in 1980.

It later emerged that Bowman is also the adoptive father of Aundria Bowman, who vanished in 1989 aged 14 after accusing him of sexual assault. 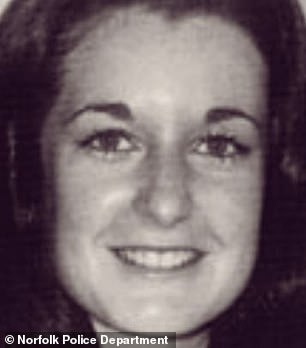 Dennis Bowman, now aged 70 (left), was arrested Friday for the 1980 cold case murder of 25-year-old Kathleen Doyle, who was found raped, stabbed and strangled to death at her home

Cathy Terkanian, Aundria’s birth mother who gave her up for adoption at the age of five months before learning she was missing 21 years later, has now called for Bowman to answer questions in that case.

Norfolk police said that forensic evidence had provided the breakthrough in Doyle’s case, but did not provide further details.

Bowman is currently in jail in Michigan, awaiting extradition to Virginia.

Doyle, the daughter of a naval officer, was found raped, stabbed and strangled to death with a chord at her home on September 11, 1980, the Virginian-Pilot reports.

She had been dead at least 24 hours before her remains were discovered by friends.

Doyle had been living in the house alone while her husband of nine months, Stephen Doyle, was deployed overseas as a US Navy pilot aboard the USS Eisenhower.

‘No victim is ever forgotten.’ 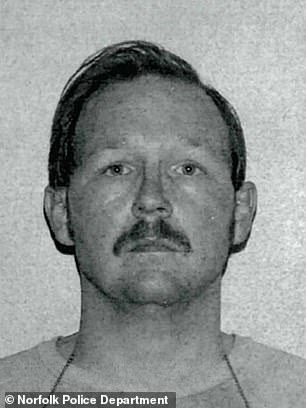 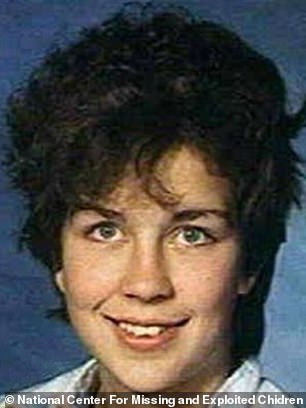 Bowman (pictured left in 1980, aged 31) is also the adoptive father of Aundria Bowman, who vanished in 1989 aged 14. He was the last person to see her

Aundria Bowman was reported missing in 1989 by Bowman who police to say she had stolen money from his house before fleeing, according to the Charley Project.

About a year before her disappearance, Aundria had refused to go home from school, then told police that Bowman had been molesting her.

Bowman denied it, saying she was having problems after recently finding out that she was adopted.

A short time later he moved the family to a trailer in an isolated, rural area from which Aundria disappeared.

At the time of her disappearance, Bowman had been on parole for the attempted kidnap and rape of another woman in 1980.

He was jailed the same year and released in 1986.

‘She didn’t just fall off the face of the earth, and that someone is very likely the someone they put in jail today.’

Bowman was subject to an investigation after the disappearance and was never ruled out by police, but was not arrested either.