A man accused of assaulting his pregnant partner and a 10-month-old baby before kidnapping the child has been arrested – with police saying the infant was ‘safe and well’.

The 25-year-old sparked a police manhunt after he took off in a car in Mentone, Melbourne’s south-east, on Tuesday afternoon.

A high-speed police chase was sparked and police pursued the vehicle along the Monash Freeway but lost sight of it shortly after 1pm.

‘It looked like they’re chasing a car because there’s a little car zigzagging in and out of traffic,’ one told 3AW Radio.

Another told the station: ‘I’m right behind them. My heart’s really pumping at the moment… They’ve got to catch him real soon or there will be an accident’.

Police had alleged ‘The man has left the scene… stating he is going to harm the baby and himself’.

The vehicle was later discovered abandoned in Cranbourne West but neither the man or the child were to be seen.

The man had swapped vehicles, with police catching up with the new car he was travelling in – with the baby onboard – at the Hume Highway near Donnybrook on Melbourne’s northern fringe. 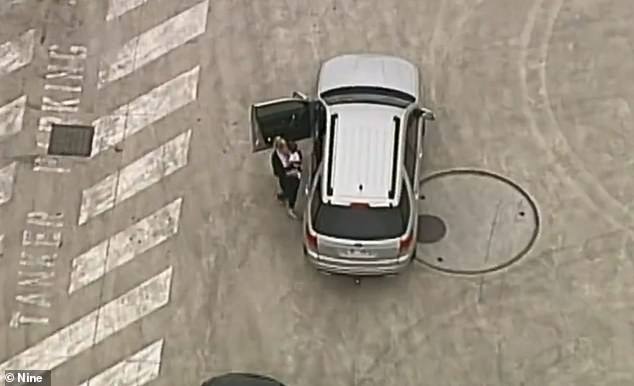 A 10-month-old baby who was with the man ‘was located safe and well’, police said

‘About 6pm police arrested a 25-year-old man in relation to the earlier incident in Mentone,’ a statement from police said.

‘The 10-month-old baby, who was still with the man, was located safe and well. The Wodonga man was arrested on the Hume Highway, near Donnybrook.

‘He is now assisting police with their enquiries.’