Man accused of murdering his girlfriend ‘made necklace out of teeth’

Dean Lowe is accused of murdering his girlfriend Kirby Noden, 32, and fashioning a necklace out of her teeth at their home in Cornwall in January 2017

A man accused of murdering his girlfriend then disposing of her in a wheelie bin and down the loo also made a necklace out of her teeth, a court heard.

Dean Lowe, 33, attacked Kirby Noden, 32, with a rock and metal pole then lived in a blood-soaked flat for four months, it is alleged.

Lowe told a friend the body was disposed of ‘in a wheelie bin down the road’ and that he ‘flushed blood and guts down the toilet’, a jury heard.

He later told a police officer he made a necklace out Ms Noden’s teeth, the court heard.

Lowe has pleaded not guilty to one count of murder and is on trial at Truro Crown Court.

Prosecution QC Paul Dunkels said the defendant got rid of his partner’s body ‘so nothing has been found apart from her blood’.

Mr Dunkels said the blood was on the weapons used to murder as well as spattered around the flat and ‘soaked into the bed’s mattress’ – which had been flipped over.

The prosecution said nobody knew what had happened to Ms Noden for four months – until May 2017.

Lowe text his cousin saying: ‘Facts are there was a body looking like Kirby on my floor. It was there for days. Flushed blood and guts down the toilet.’

He also text a friend saying: ‘I woke up with a body looking like Kirby on the floor – she was dead.

‘I put the body in the bin. I’ve got weird things in my head that the whole thing is a set-up but, yeah, I put it in a wheelie bin down the road.’ 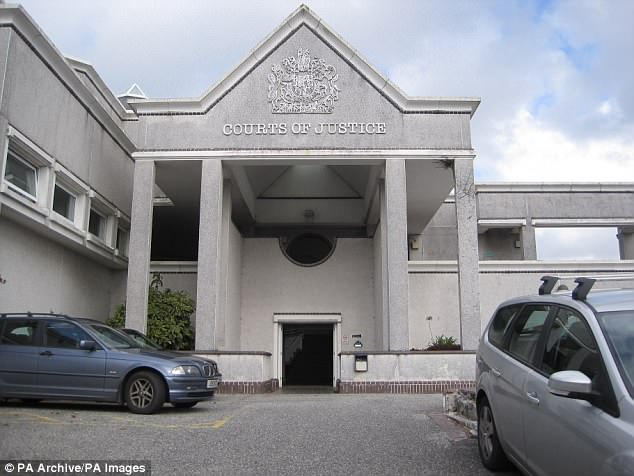 Truro Crown Court, pictured, Ms Noden’s blood was spattered around the flat she shared with Lowe. Police raided the house after Lowe messaged his cousin in May 2017 claiming to have disposed of his partner’s body four months earlier

The family contacted police who went to the flat to question Mr Lowe, the barrister said.

‘The defendant then showed a police officer the blood and admitted killing Ms Noden and disposing of the body,’ Mr Dunkels told Truro Crown Court.

‘In January last year Dean Lowe and Kirby Noden were living together in a flat in Marazion.

‘That month he attacked her in the bedroom, beating her to death with a rock and metal pole. He then disposed of her body so nothing was found but blood.

‘Blood was found splattered over the walls, on the mattress and on the murder weapons.’

Truro Crown Court has heard that the couple, from Marazion, Cornwall, had lived together for a number of years.

Originally from Winsford, Cheshire, they moved to south-west England and lived in Torquay, Devon, and Launceston, Cornwall, before moving to Marazion.

The court heard that they lived ‘a chaotic lifestyle marked by the use of various illegal drugs’.