A banker allegedly took his two children to the roadside memorial of Allison Baden Clay and the street where Hannah Clarke was set alight with her three kids in a bid to intimidate his estranged partner, a court has heard.

The father fronted a bail hearing at Brisbane Magistrates Court on Saturday over alleged domestic abuse offences which allegedly occurred in 2018.

The charges include choking/suffocation/strangulation in a domestic relationship and assaults occasioning bodily harm.

The court heard the man, who cannot be named for legal reasons, also allegedly took his nine-year-old twins to the ‘murder sites’ of domestic abuse victims to ‘exert control’ over his ex-partner, the Courier Mail reports.

A father has been accused of taking his children to the ‘murder sites’ of domestic abuse victims to ‘exert control’ over his ex partner. Pictured: Allison Baden-Clay and her husband Gerard Baden-Clay, who is serving life in prison for her murder

‘The defendant has stated to the victim that whilst he had custody, visitation with his two children he has taken him on a family outing to see the roadside memorial of murdered Brisbane mother Allison Baden-Clay,’ Magistrate Zac Sarra said.

‘The defendant further advised the victim that he has taken his two children to the street where the quadruple murder suicide occurred – Hannah Clarke and her three children.

‘It’s the investigating officer’s opinion that this behaviour of exposing the victim’s children to a memorial of Baden-Clay and the street where Clarke and her children were murdered, is the defendant attempting to have a level of control of the victim. The defendant is also trying to prove his dominance.’

Mother-of-three Allison Baden-Clay, 43, was found dead in a creek bank in April 2012 –  10 days after her real estate agent husband Gerard reported her missing.

He was charged with her murder two months later and sentenced to life in prison in July 2014.

A memorial has been erected at Kholo Creek in Brisbane‘s west where Ms Baden-Clay’s body was found by a kayaker days after her disappearance.

He doused them in petrol and set their car alight in Camp Hill in Brisbane’s south before taking his own life nearby. 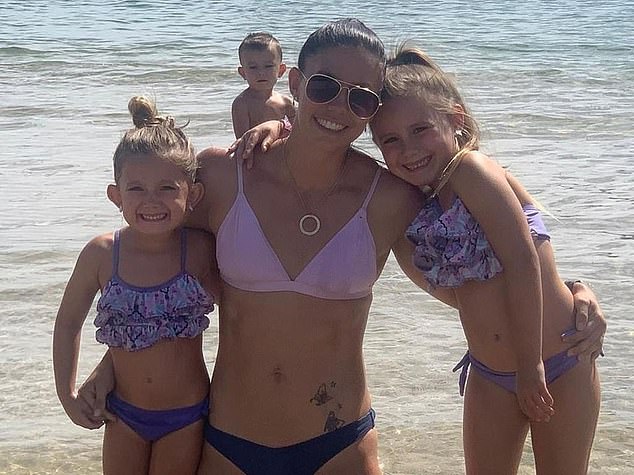 Hannah Clarke, 31, was burned alongside her children Aaliyah, six, Laianah, four, and Trey, three, (pictured together) in their car by her estranged husband last year

The children died in the vehicle while Hannah  jumped from the driver’s seat screaming ‘he’s poured petrol on me’. She later died in hospital.

She was posthumously honoured as one of Australia’s Women of the Year in 2020 for her  incredible bravery and resilience to ensure her story was told to police during the final hours of her life.

Mr Zarra questioned why a father would take his children to the sites where women were killed and asked if he was ‘trying to make a statement’.

The man’s barrister Robert Glenday said the allegations were ‘ridiculous’ and his client denies them.

The court heard the man’s ex-partner took out a temporary protection order against him in 2019, which has not been breached, and he had no prior convictions.

He was granted bail to face court at a later date.

If you or someone you know is experiencing sexual abuse or family violence contact:

Men who have anger, relationship or parenting issues, should contact the Men’s Referral Service on 1300 766 491