One man has been arrested and a motorcycle rider is on the run after a shot were fired during an alleged jewellery heist in front of shocked onlookers in broad daylight.

Emergency services were called to Diamond Hill Jewellers at Carnes Hill Marketplace in Sydney’s south-west around 4.45pm on Monday after reports of an armed robbery.

Police were told two men entered the store and allegedly smashed the glass display cabinets before firing a single shot from a gun and fled with stolen jewellery.

Officers were directed to a motorcycle outside the shopping centre and rushed outside to arrest a male passenger in dramatic scenes as the rider allegedly fled the scene.

A desperate manhunt has been launched for the motorcycle rider who remains on the run on Monday night with additional police units and a helicopter deployed to assist in tracking him down.

No one was injured in the incident and there’s no ongoing threat to public safety.

At least one woman was treated by paramedics for shock.

The man arrested was allegedly in possession of a firearm and jewellery which were seized by police.

A major police operation continues at the shopping centre with the jewellery store cordoned off as they interviewed shocked staff and shoppers.

Photos from the scene show the store floor covered in shattered glass.

‘He shot up in the jewellery store. And then from then he came in, he ran outside he took a couple of things from the front plate but from what I saw, came outside went to his bike and he just went away,’ one witness told Nine News.

Others described the scenes chaos throughout the shopping centre including Woolworths, where shoppers were locked inside the supermarket for 30 minutes following the incident. 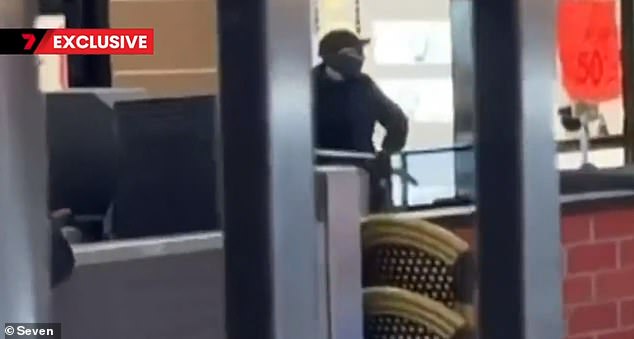 ‘There was a few kids crying because they didn’t know where their mum was, so a few had been separated from their parents.’

Anyone who may have information or mobile phone footage is urged to call Crime Stoppers.

Police said  no one was injured in the alleged armed robbery and there’s no ongoing threat to the public (pictured, police at Carnes Hill Shopping Centre)