Man arrested after ‘ramming’ a police vehicle in Melbourne

A man has been arrested after he reportedly rammed his vehicle into a police car in Melbourne on Tuesday night in attempt to evade police officers.

Workers on Bourke Street at the time reportedly hid in the back of their store after hearing four loud bangs coming from the same street where James ‘Jimmy’ Gargasolous allegedly mowed down pedestrians in January.

‘We just ran and hid. We thought it was another Bourke St. We were all here for that so we were terrified,’ a witness told the Herald Sun.

Authorities were called to the area with reports that a man who appeared to be unconscious was lying in a blue Toyota Camry with a smashed windscreen.

As an officer approached the damaged vehicle on foot at around 5pm, the man sat up and rammed the nearby police car on Bourke Street, according to 9NEWS.

He then reportedly mounted the pavement outside a McDonald’s, and then tried to reverse before smashing into the police vehicle, witnesses said.

‘Police were yelling at him to get out of the car but he wouldn’t,’ a witness said. ‘He smashed into the police car then tried to reverse to escape the cops.’

But police managed to corner the man and tackled him to the ground with a taser before arresting him at the scene.

The police then cornered off the car, and carried out a search during which two two large fire arms and a hunting knife were found.

There have also been reports that the man was driving on the wrong side of the road earlier in the afternoon, and that a witness yelled out that the man had a gun.

The man, believed to be aged in his 20s, was taken to hospital for an assessment, and nobody else was injured during the incident, according to The Age.

He has not yet been charged, and authorities say that it is unclear whether the incident was terror-related.

A Victoria Police spokeswoman said late Tuesday evening the man was still receiving treatment in hospital and was unlikely to be questioned by police overnight. 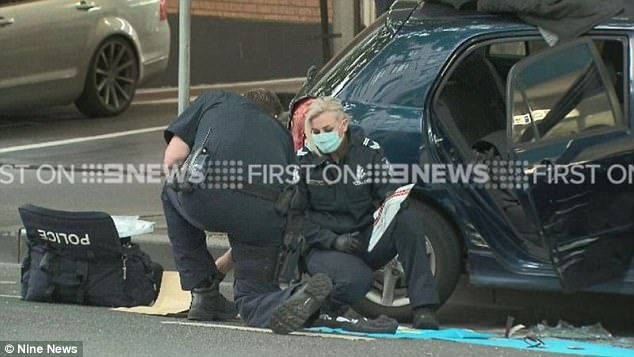 It happened on the same stretch of road where four people lost their lives and two later died of their wounds after Gargasolous drove his car into pedestrians on Bourke St.

More than 30 people were injured during the rampage, which began with Gargasolous allegedly stabbing his brother and ended with him being shot in the arm by police.

He is charged with six counts of murder and 28 of attempted murder over the January 20 incident, but has not yet faced court due to being ‘mentally unfit’.