Man arrested over death of woman at Bestival

A man has been arrested on suspicion of murder after a woman’s body was found at Bestival.

Officers were called to the site just before 1am on Monday to reports revellers were concerned for the welfare of the 25-year-old woman from London.

Police said the body of the woman, who had attended the event, was found in a wooded area of the festival site in Lulworth, Dorset.

A 28-year-old man from London has been arrested on suspicion of murder.

Dorset Police said the arrest was ‘to enable officers to conduct an interview under caution to help establish the full circumstances’.

Some 30,000 revellers descended on the site for the three-day event but forensic officers were working at the scene as the festival came to a close and a cordon remains in place.

Detective Chief Inspector Sarah Derbyshire said: ‘Following the discovery of the woman’s body we have now launched an investigation into her death.

‘We have specially-trained officers supporting her family at this very difficult time.

‘Inquiries are now under way to establish how she died.

‘A post-mortem examination will be carried out in due course and this should give us more of an indication as to the cause of her death. 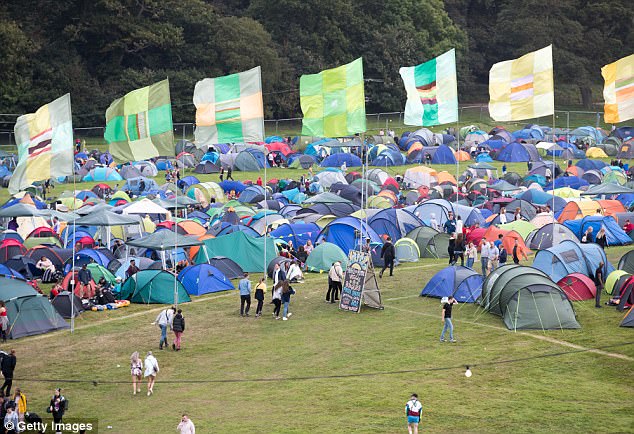 Police said the body of the woman, who had attended Bestival, was found in a wooded area of the festival site in Lulworth, Dorset

A force spokesman said the woman’s family had been informed and the coroner had been notified of her death.

Anyone with information is asked to contact the force at www.dorset.police.uk, via email 101@dorset.pnn.police.uk or by calling 101, quoting incident number 11:36.

Alternatively, Crimestoppers can be contacted anonymously on 0800 555111 or via www.crimestoppers-uk.org.