Man asks Reddit what he should do with his sick day

A man who was pulling a sickie from work was savaged by angry Reddit users after asking how to spend his day off.

The man posted an image of him from what appears to be his sofa, under a blanket and infront of the TV.

He captioned it: ‘Sick day today. What should I do?’

Instantly, user ClarksonYouP*****k was being mocked by others, likely from their offices.

Huengonaminson1 mocked the man for his mirror.

They wrote: ‘Jump through that portal on your wall and see if takes you to a universe where you have a modicum of taste?’

Another quickly suggested ‘bin that mirror’.

ObnoxiousChap sarcastically said he should: ‘Post pictures of your grey prison cell on the internet.’

The rest of the room was also harshly judged.

Umblegar asked: ‘Did all the colours go out the wall vortex?’

Ammobandanna said the entire living room seemed ‘like it was styled by someone with no colour vision.’

The carpet also took some flak.

Gingerbond suggested the man should ‘mow your carpet.’

And others backed him up.

Chuckles1188 wrote: ‘Mow the carpet, it’s getting a bit out of hand’

Thermo_Dai_Namics said he should ‘hire a decorator.’ 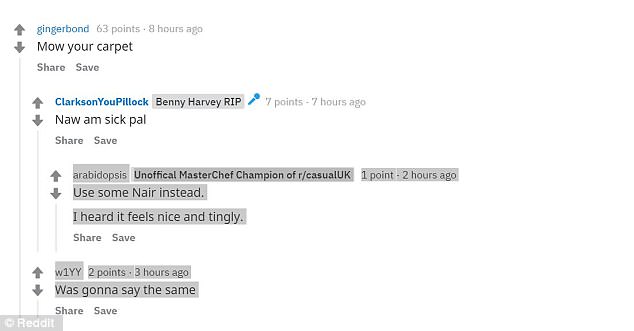 The man tried to defend the room choices – explaining he had not been responsible for decorating.

He replied: ‘Well, I don’t pay any bills so I don’t decorate the rooms.’

However, there was no sign of his tormentors letting up.

Other suggestions were just as useful, including Arabidopsis’ post which said the man should’remove fluff from belly’.