Man beats his dog with a stick during Bill Shorten presser

A man was filmed hitting a dog with a stick during Labor leader Bill Shorten’s press conference last Thursday.

The opposition leader was in Melbourne addressing reporters about the clean energy tax when cameras caught the man in the background.

The dog, which appears to be a pitbull, walks into view with an owner behind Mr Shorten.

It begins to sniff around the base of a tree and seems to find something in a hollow.

The dog was seen sniffing inside a tree hollow before the man, presumably the owner, walks into view

The man, presumably the owner, comes into view shortly after and the dog quickly runs behind the tree.

He can then be seen hitting the animal with a stick, on the top of its head and face.

The man continues to hit the dog until the animal moves away from the tree hollow. 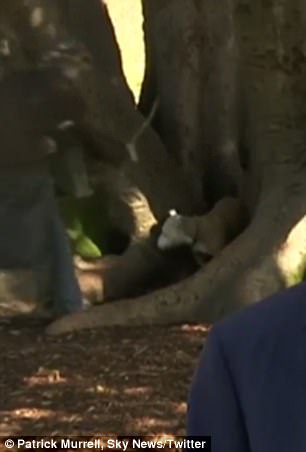 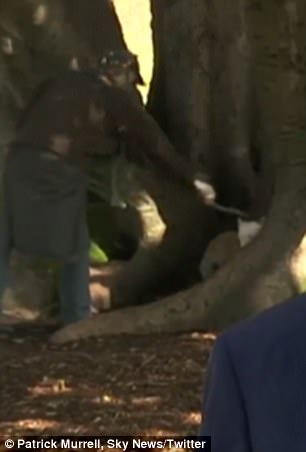 The man starts hitting the dog with a stick, not realising he was being filmed on camera

Mr Shorten and the reporters don’t seem to notice the man or the animal at all.

The video was uploaded to Twitter by journalist Patrick Murrell, who believes the man was trying to stop the dog from mauling a possum.

But Mr Murrell uploaded the video on Thursday with the tweet: ‘Look closely at the background in today’s Shorten presser.’

He then clarified in the replies: ‘To be fair he was trying to stop it from mauling a possum.’