A man from Oregon is earning fans for his firm but respectful reply to a sexist comment made by his mother.

Clint Edwards, a 35-year-old writer, was taken aback when his mom criticized his wife’s homemaking skills. While he suspects she wasn’t aiming to be rude, he was nonetheless surprised by the remark and wanted to set her right.

Now thousands of men and women are praising Clint’s thoughtful response, which he shared on social media and his blog, No Idea What I’m Doing: A Daddy Blog.

Perfect: Clint Edwards, 35, is being praised for his patient but firm response to his mother after she commented on his untidy home

On Saturday last summer, Clint was washing the dishes and speaking with his mother on the phone when she made a comment that stopped him in his tracks.

‘Doesn’t it bother you that Mel won’t keep a cleaner house?’ the older woman asked. Clint didn’t immediately know how to respond.

‘My mother didn’t say it in an antagonist way or anything,’ he explained. ‘It was more out of curiosity. She’d obviously noticed that our home wasn’t all that tidy.

‘Not that it was only Mel’s job to clean it,’ he pointed in his blog post. ‘I see our marriage as a partnership, so cleaning is as much my responsibility as it is hers.

‘I will admit, though, there is often kid clutter, dishes in the sink, and half finished art projects on the counters. I will also admit, it isn’t as clean as my mother’s home, but that doesn’t bother me. In fact, I don’t really think about that at all.’

Clearly, it bothered Clint’s mother, who seemed to be of the mindset that keeping the house in order is a woman’s responsibility. 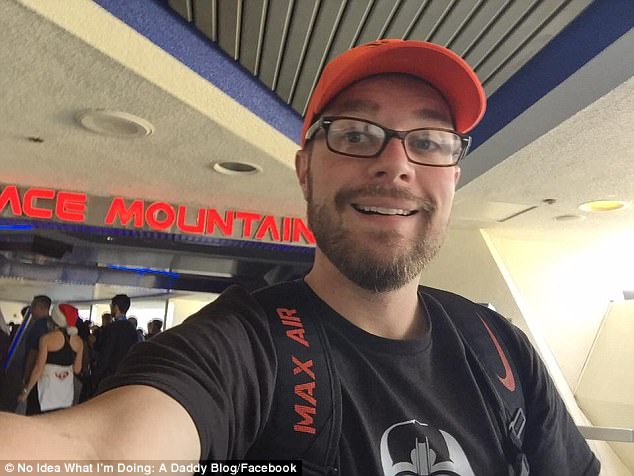 Old-fashioned: Clint, a writer and blogger, said his mother seemed to think it was his wife’s job to keep the house clean 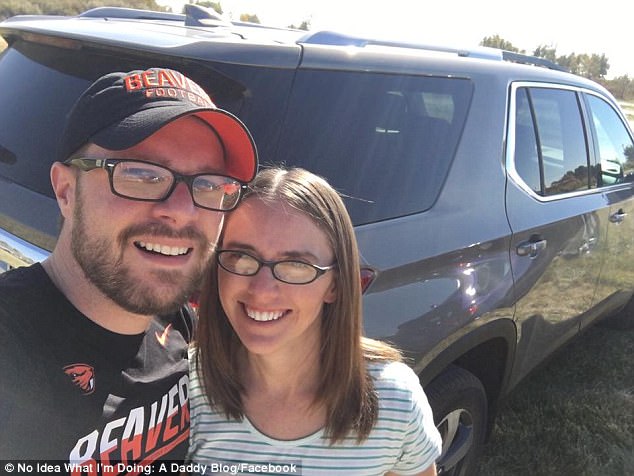 Smart: After struggling for the right words, Clint said that he ‘didn’t get into this marriage for a clean house,’ but rather chose ‘someone I could spend my life with’

‘I didn’t really know how to respond to my mother, so I floundered. I never really know what to say in moments like this,’ he explained.

‘But thinking back, I believe my mother’s perception of our house really reflects the era she grew up in,’ he went on. ‘She’s part of the baby boom generation.’

It wasn’t just her mindset, either: Clint recalled one piece of advice he received from his father about picking a wife: ‘Stop by her house unexpected. See how it looks in there. You can tell a lot about a woman by how she keeps her house.’

‘I think my mother’s concern over a clean house has a lot to do with her trying to meet the expectations of her youth,’ Clint said. 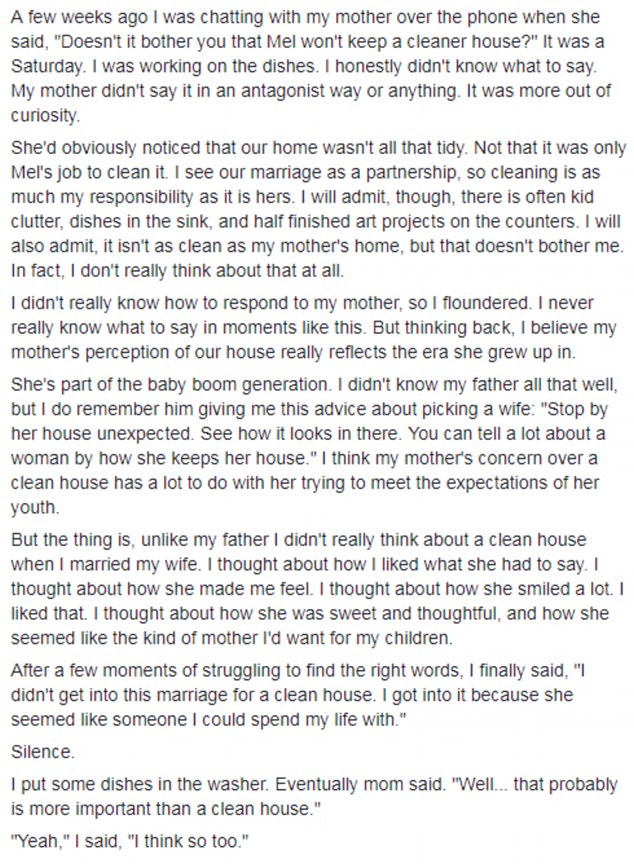 Good story: Thousands on social media are impressed by his words

Clint took a few moments to come up with the right way to answer, and finally settled on saying to his mother, ‘I didn’t get into this marriage for a clean house. I got into it because she seemed like someone I could spend my life with.’

To his mother’s credit, she replied: ‘Well… that probably is more important than a clean house.’

Since Clint posted about the exchange in August, his Facebook post has earned nearly 9,000 likes an hundreds of comments.

‘So many things to love about this post,’ wrote one woman. ‘I also LOVE how you didn’t just defend your wife, but you answered with an honest, heartfelt answer in a loving way. That could have been an ugly situation on so many levels, causing strife and stirring up drama and hurt feelings. Beautifully handled, sir. I applaud you.’

‘I love you! Will you marry me?’ wrote another woman, while a third wrote: ‘Kudos to you for making it clear you signed up for equal partnership.’

‘You totally handled that brilliantly,’ wrote yet another. ‘Those kinds of comments are so difficult to respond to as quickly as they come, but you gave a great response that was affirming of your family and respectful all the while. How wonderful that your mum had a moment to reconsider too.