This is the shocking moment a man accused of murdering and decapitating his wife calmly walks onto the street in China holding her head.

The suspect surnamed Zhang, 31, allegedly killed his spouse during a family dispute before cutting her head off and disposed of it at a rubbish bin in a waste transfer station.

Mr Zhang then turned himself in at a police station at around 8am local time on April 25. Police sealed the nearby area and post-mortem examiners were called to remove the body from their rented apartment, according to reports.

Suspect, Mr Zhang, was said to be carrying his wife’s severed head on the street in China

Surveillance camera footage captured the moment Mr Zhang walked out the entrance of a building and seemingly holding his wife’s severed head in his left hand.

A number of neighbours can be seen walking on the street as Mr Zhang calmly walks through the alleyway moments before disposing of his spouse’s head.

According to Southern.cn, the incident happened in Kangle Village, Haizhu district in Guangzhou, Guangdong Province, where the residents were mostly working in nearby garment factories.

A neighbour, Mr Wang, told the reporter that he noticed a man walking on the street ‘covered in blood’.

‘The man is about 5.6ft tall and had blood all over his clothes and shoes,’ Mr Wang said.

Another neighbour, Mr Zheng, said a sanitation worker found a severed head in a rubbish bin and alerted the police, stated Southern.cn.

The statement wrote: ‘Suspect Mr Zhang killed his wife out of family dispute. Mr Zhang turned himself in to Guangzhou Police at around 8am.’ 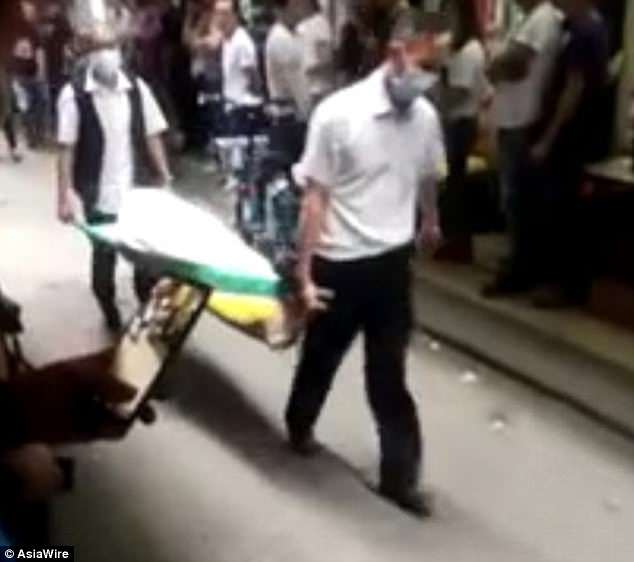 Police officers sealed the area near the flat as they carried out investigations.

The victim’s head was later retrieved from the waste transfer station by the authorities, who carried it away in a cardboard box.

Post-mortem examiners were called to the scene and left with a stretcher, which was suggested to be carrying Ms Xia’s body.

The couple are both natives of North China’s Hebei Province, said in a police statement.