A Chinese man has been rushed to hospital after he was stabbed on his head with a folding knife during a heated row, according to reports.

Viral footage shows the unidentified patient covered in blood calmly walking towards an ambulance while the blade is lodged in the back of his skull in south-western Chinese city Chongqing.

The man is believed to have been recovering after undergoing an operation to remove the weapon while police are investigating the case, says Chinese media. 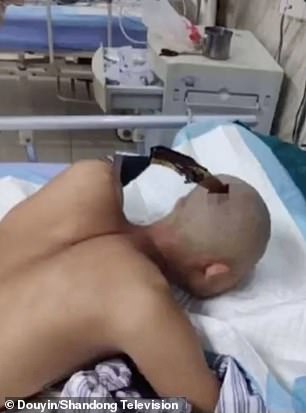 A video filmed by an onlooker shows the Chinese man getting into the hospital vehicle while part of the folding knife is sticking out of the back of his head.

A medical worker can be seen standing next to the patient while holding a drip bag.

Another picture emerged online shows the man lying on a hospital bed after having his head shaved, preparing to receive the removal surgery.

The incident was initially reported by Chinese media, claiming that the knife was thrown from a high-rise building before landing it on the resident’s head.

But local police quashed the rumours on Monday, confirming that the man had been attacked during a brawl, reported China Youth News. 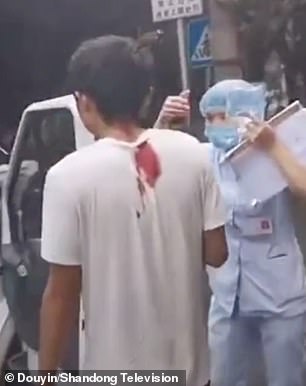 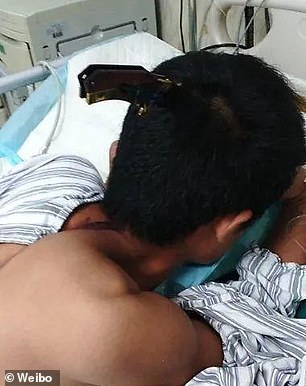 The incident occurred in Chongqing’s Fuling was initially reported by Chinese media, claiming that the knife was thrown from a high-rise building before landing it on the resident’s head

An investigation for the case is underway, says the Fuling authorities.

The patient is believed to have been recovering at a local hospital following the operation.

The news comes after another Chinese man has been spotted walking into a hospital with a cleaver stuck in his head after ‘being assaulted during a fight’.

Viral images and footage from June show the unnamed patient covered in blood while the steel blade is stuck deep in his skull at an A&E department in Hubei province.