Man could lose his home after being fined $30,000 because his lawn grew too long

A Florida man could lose his home after he was fined nearly $30,000 for letting his grass grow too long.

Jim Ficken, 69, is now fighting back with a lawsuit against Dunedin’s Code Enforcement Board after it fined him $500 per day for nearly 60 days before moving to foreclose on his home.

Ficken said he was tending to his late mother’s estate in South Carolina over the summer of 2018 when the city, west of Tampa, began fining him hundreds of dollars a day without notice for letting his grass grow longer than 10 inches.

Jim Ficken, 69, could lose his home in Dunedin, Florida after he was fined nearly $30,000 for letting his grass grow too long

Meanwhile, the city has claimed it’s in the right because Ficken is a repeat offender.

The problems first began in the spring of 2015, when Ficken’s mother fell ill.

He began making regular trips to South Carolina to help take care of her, and was cited by the city for letting his grass grow too long, according to the Tampa Bay Times.

Ficken said he then mowed his grass and enlisted the help of his friend, Russ Kellum, to keep the lawn maintained during his trips away.

His mother, Marienelle Ficken, died in the summer of 2016. Two years later, in May 2018, Ficken had to fly back to South Carolina to put her estate up for sale.

While Ficken was away, he had no idea that Kellum – who was 62 – had died unexpectedly.

Meanwhile, his yard had been inspected by a Dunedin code enforcement official. Because Ficken was considered a ‘repeat offender’ due to his warning in 2015, the city began charging him $500 in fines every day without notifying him.

Ficken returned home in July and tried to take care of the grass, but his lawn mower broke. 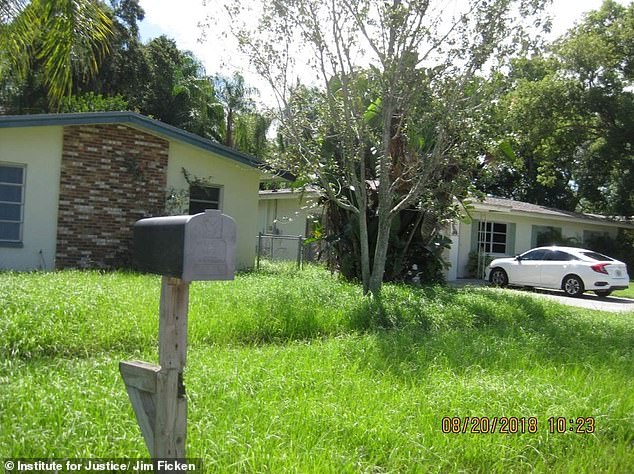 Ficken said he was tending to his late mother’s estate in South Carolina over the summer when the city began fining him hundreds of dollars a day without notice for letting his grass grow longer than 10 inches tall. Pictured is his lawn in August 2018

The retiree, who lives on a fixed income and relies on food stamps, still had no idea about the fines and didn’t rush to buy a new mower.

It wasn’t until the end of August that a city inspector passed by Ficken’s house and warned him that he was ‘going to get a big bill from the city’.

Ficken bought a new lawn mower and cut the grass the very next day. The city inspector confirmed his lawn was in compliance but still did not inform him that he was already facing $23,500 in fines, according to his lawsuit.

The city did notify Ficken that he had a hearing with the Code Enforcement Board on September 4, but he had to return to South Carolina after an issue arose with his late mother’s estate.

Ficken was once again cited for his lawn for 10 days while he was out of state. The board determined that his original fine would stand and approved the additional fine. 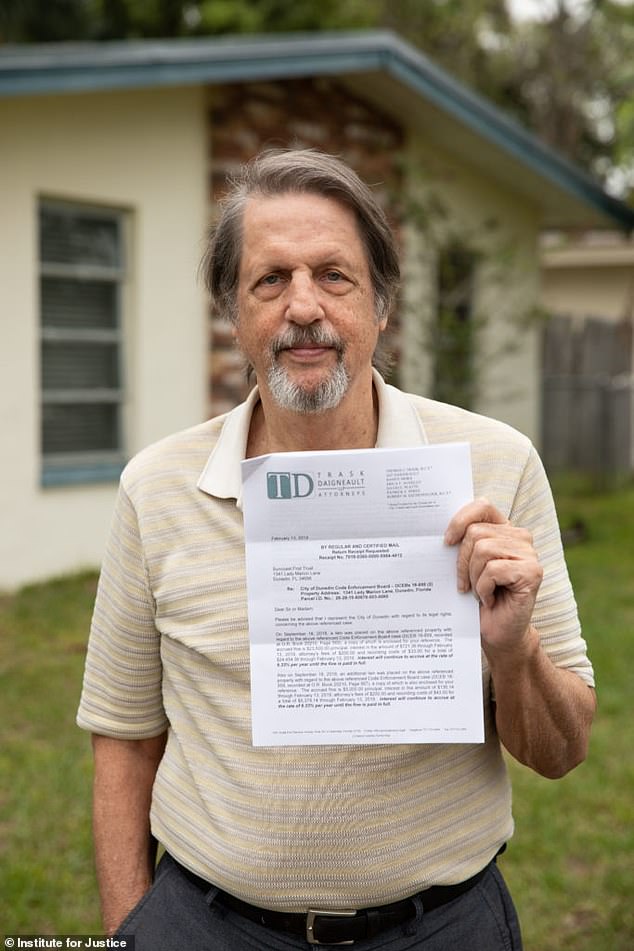 Ficken only learned he was facing tens of thousands of dollars in September 2018, nearly 60 days after the city first began fining him. Now the city has moved to foreclose on his home

It was only on September 18 that Ficken said he finally learned about the fines.

In February, the city warned Ficken that it would move to foreclose on his home if he didn’t pay up.

Ficken instead reached out to the Institute for Justice, which agreed to take his case pro bono.

The non-profit law firm had just recently won a case in which the Supreme Court ruled that states and local governments cannot levy excessive fines.

It was the first time the Supreme Court had recognized that the Eighth Amendment’s ban on excessive fines also applies to states and local municipalities. 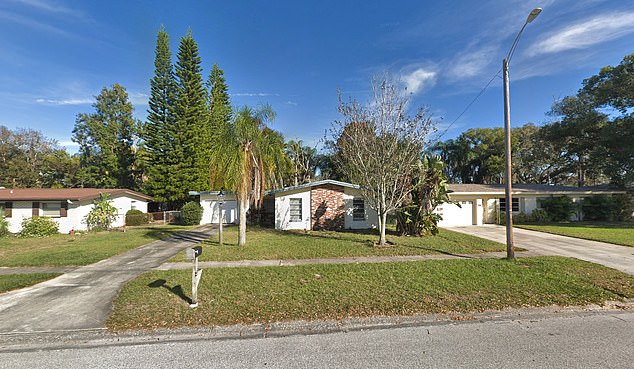 Ficken is now fighting back with a lawsuit against Dunedin’s Code Enforcement Board. Pictured is his home in a recent Google View photo

‘Losing your home because you inadvertently let your grass get too long is the very definition of an excessive fine,’ Ari Bargil, one of Ficken’s attorneys, said in a statement.

‘No one should face crippling fines, let alone foreclosure, for trivial code violations.’

The city of Dunedin has gotten stricter when it comes to code enforcement violations in the last decade.

But Dunedin Mayor Julie Ward Bujalski defended the city’s code enforcement, saying it was ‘not interested in making money on the backs of our citizens’.

Bujalski claimed the board took action after Ficken’s neighbors complained, an allegation that his attorneys deny.